Summer is here!  I hope you are all staying safe and healthy - not only physically healthy, but mentally healthy!  As usual, I have several projects underway, but admittedly my progress has slowed with the arrival of summer.  I have had a number of things around the house to get done that has detracted from my hobby time.
The largest hit to that time has been my water heater.  It finally died after springing a leak.  It destroyed part of my garage floor.  I had the water heater replaced with a tank-less option (highly recommended!) and now I need to replace the floor in the garage (overdue as well, so no big deal --- will knock that out this weekend).
My AWI project moves along nicely.  I'll have Breed's (Bunker) Hill ready for September gaming, and Guilford Courthouse before the end of the year.  I had some existing units already and have finally got those based up (pictures below).  8 units below, but I actually have 12 American units completed painting.  The first wave of British are also due by the end of this week. 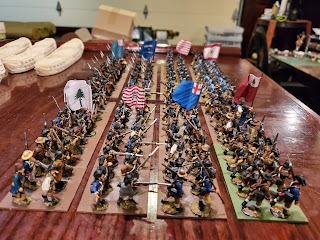 You can see some hulls for my 1:600 scale Napoleonic ships in the back left of the picture above --- more of those coming as well.  The British ships (~26) for Trafalgar are all completed. 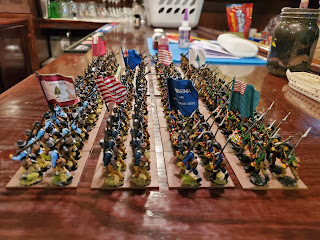 I continue to love GMB flags - they are top notch and I use them whenever I can - the golden standard!
Roy Scaife has taken on WW2 naval for our group - doing this at 1:1200 scale (normally this is 1:2400 scale, so this large size) ... ships are all painted and just in need of basing.

I did finish up my Uruk-hai painting for that large pike block ...

Diverting from miniatures ...
The other detractor from hobby time - but at least related - has been my family diving head first into what I would call "more advanced" boardgames.  Two boardgames that have been at the top of the popularity list for the family is Root (just an AWESOME game) and Everdell.  We've played all of the expansions for both games, even doing the "massive" Everdell game, playing with all expansions at once. 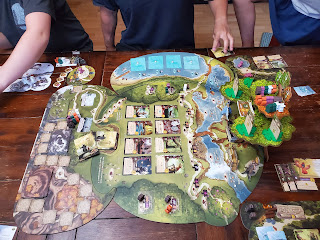 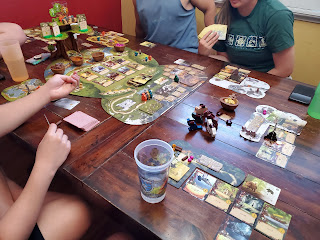 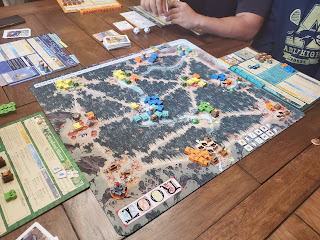 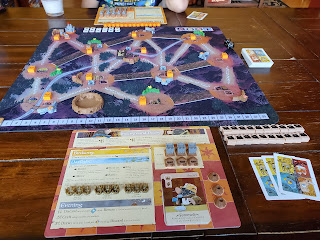 I even hosted a couple of "casino nights" which the family/kids loved (yes, a small amount of money was involved) ... 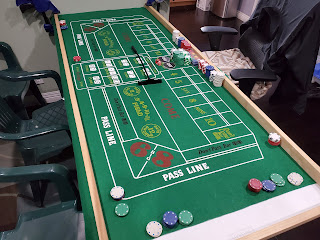 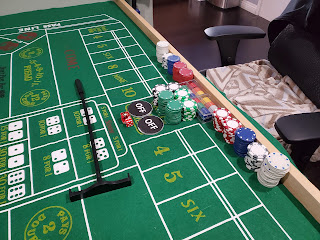 Diverting massively from miniatures ...
I'm fortunate to have a nice backyard (at least for California standards).  I decided to host some outdoor movie nights for the family - which is actually fairly easy to accomplish.  I purchased a large outdoor screen from Amazon along with an HD projector --- all this for <$400 which is not bad at all considering the screen is 14 feet wide and the movie is in HD quality at that size! 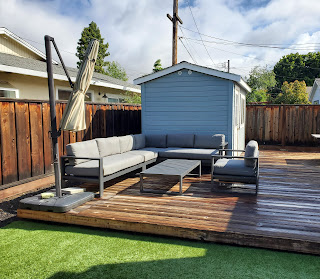 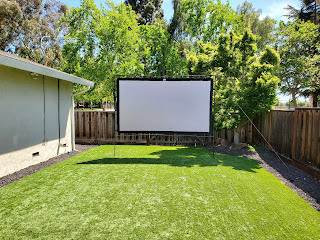 I watched LOTR: Return of the King --- which was EPIC on such a large screen!  This is a great activity to do with the family.
I even built a raised garden and planted some vegetables ... picture below is older, the veggies are coming in nicely now. 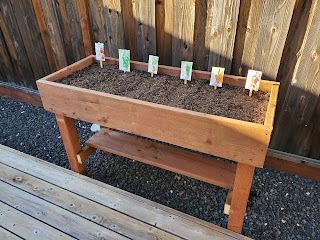 I also managed to refinish my dinning room table which came out really nice. 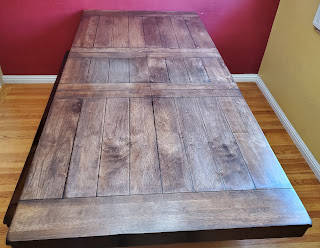 Ok, enough of the non-gaming/non-miniatures stuff ... just sharing to show some things I've been doing to keep myself busy in these crazy times.  I hope you are all finding ways to make yourself happy/keep sane in what seems like a never ends cycle of bad global events.  I'm also working on some major updates to my ACW and Napoleonic rules based on many games/play testing and results --- finally homing in on what can be a "finally done" set of rules.  With that also comes my AWI rules.
Onward and upward folks!  Stay tuned for more!
Posted by Jay White at 10:08 AM