Progress ... huzzah!  My base British army for Bolt Action is now complete.  I used every last bit of Swamp Tuffs I had to wrap this up ... almost got stuck waiting for more to arrive.  I'm happy with how the army has come out, and I'm particularly pleased with the decals that are included in the Warlord Games boxed set.

I'm nearing completion on a 6pdr anti-tank gun and have several vehicles to complete, but this is the core of the army.  I need to add a sniper and forward observation team.

Give Your Dice Some Love!

As many of you may have seen in my gaming pictures I use a clear bucket to roll my dice in --- this is called a "Dice Shield" and is an exceptional piece of gamer bling.  The Dice Shield I have is actually just a prototype of the product ... I was lucky enough to bribe the creator at a local convention with enough cash for him to give it up to me!  I've just been informed that the project is now live up on Kickstarter ... which is great ... because I want one for each corner of my table (right now we share a single one in the middle of the table ... would rather have one on each side at least).

Disclaimer:  I'll be clear, I have no financial investment involved here ... I'm merely a "user" ... and I have no real connection to the creator who, beyond meeting him at a local convention once and chatting with him a couple of times over that weekend, I have no other involvement with him.


Anywho, please check it out ... and get one for yourself on the Dice Shield Kickstarter!
Posted by Jay White at 7:05 PM 3 comments:

I was fortunate to get a game of Bolt Action in last night.  I very much enjoyed my first game of Bolt Action a couple of weeks ago and was excited to get another go at it.  Since the last game I was able to finish basing my Germans ... but I'm still in the process of basing the British.  I still need to fix the helmets on the German MG42 team (MMG) as they should be camo - I'm getting to it soon!  I still have a lot of work to do on my terrain for the period ... but I have enough to gear up a fun game at the moment.

We rolled the "Point Defence" scenario.  The British decided to be the attackers and the Germans choose the table edge nearest the town.  Normally it is expected that the players will play across the 4' table span - but for fun we decided instead to play down the length of my 4'x8' table.  As a result, we adjusted the deployment zones.  Normally the defender deploys 12" in from the table edge - we modified this to 24" (anywhere in "front" of the river - see pictures for table layout).  Normally the attacker moves onto the table in the first turn - we modified this to be a full movement (so each unit got to "run" onto the table to start) - this meant most everything was at 12" with the exception of the Sherman tank which got out to 18" on the main road.

For the scenario, at the end of turn 6 you roll to see if the game continues.

The British preparatory bombardment put 1-2 pin markers on most of the German infantry units.  The unit advancing over the bridge took a single casualty.

Turn 1 saw the Germans moving their two infantry sections with Panzerfausts towards the nearest buildings in the town.  The British advanced and not much else of note other than moving into positions.

Turn 2 the two advancing German infantry units gain the two buildings (1st floors).  The British started their Mortar attacks against the buildings.  Most of those attacks saw the rounds explode on the roof level or 2nd level ... not making it down to the first floor.  The Hetzer moved towards and behind the blown up building - in position to pop out and take the advancing Sherman by surprise.  My plan was to activate the Hetzer first, and if it was unsuccessful in taking out the Sherman tank, I would use my medium mortar to lay a smoke screen on the road.  Of course, no plan survives contact with the enemy ...

Turn 4-6 saw the British continue to fire upon the infantry in the buildings while inching forward.  They would not get much farther than this point.  The mortar hits on the building continued to explode on the roof or 2nd floors ... but the pin markers started piling up.  The Hetzer did pop out and I rolled very well and the Sherman tank was knocked out.  That really took the luster out of the British advance.

In the end, on turn 6, we rolled and the game ended.  We started playing the game late at night ... we should have added at least two more turns ... but both of us were tired and Roy (this being his first game) was very happy with the rules/game ... so I'm looking forward to filling out my armies and terrain for this period.

Lots of pictures below.

More pictures ... showing turns 4, 5 and 6 (which when we rolled became the last turn). 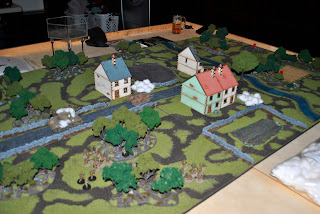 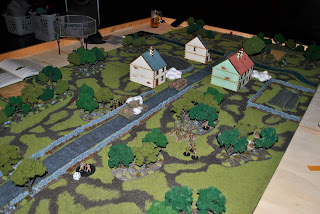 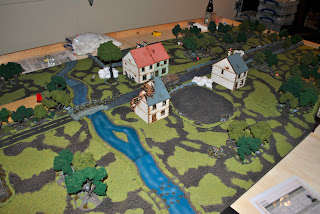 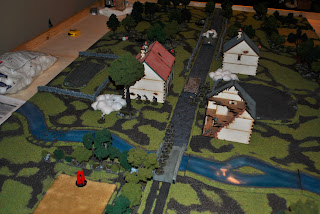 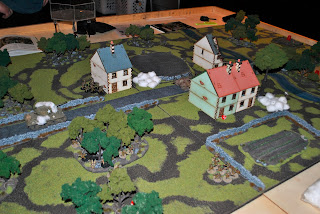 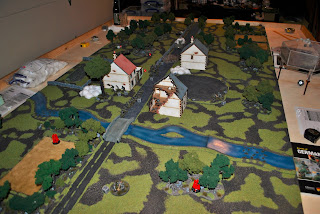 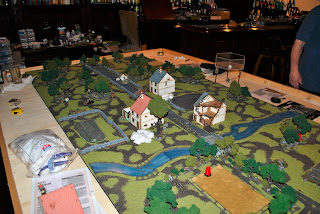 I had a great game with Geoffrey Hummel this evening.  We played on a 4'x4' table.  What was excellent about this game to start was this is the first time I truly used an Indian-only force.

BRITISH FORCE (Geoffrey Hummel)
Scenario: Protection - 10% of points are used to purchase civilians.  At least 1/2 of the civilians must survive the game.  Roll 2D6 at the end of each turn - if the result is equal to or less than twice the number of turns completed the game ends.
Side Plot: 66 - Let us thwart their plans!:  To fulfill the conditions of this side plot the opponent must not achieve theirs.

INDIAN FORCE (Jay White)
Scenario: Scouting Mission - divide the table into 4 equal quadrants.  All 4 quadrants must be scouted (friendly models within the quadrant at the end of a turn will scout that quadrant).  Once all quadrants are scouted at least 1/3 of your figures must leave your table edge (game ends immediately once that is done).
Side Plot: 45 - Emotive:  Your Officer doesn't want the blood of his men to be spilled for nothing.  If at the end of the game the Morale card of your side has never been played and resolved, you have fulfilled the conditions of this side plot.

Turn 1
Random Event: 53 - Hate and vendetta:  Until the end of the turn, all units gain a +1 bonus to all their Aggressiveness rolls.

The Rangers fail to appear.  The Indians move forward on all fronts and take cover where possible.  The British Regulars and Grenadiers hold steady in the village and buildings.  Some shots are exchanged to no great effect (poor rolling).  One of the veteran brave units charge against the British Grenadiers that had just moved into the large building.  Tomahawks were thrown (making a lovely display in the side of the house - no effect).  The Indian recoil and lick their wounds ... but not before the Grenadiers charge out and force the Braves to recoil yet again.  That additional +1 bonus to Aggressiveness rolls comes in handy ... although we both roll terrible.

At the end of turn 1 the Indians have scouted 3 out of 4 sectors.

Turn 2
Random Event: 46 - When everything else failed, pray:  Each player rolls a D6.  This is the number of single D6 re-rolls that players receive.  Each of these re-rolls may be spent to re-roll a single D6.  When the Event card 1 is played again, all unspent re-rolls are lost.
*We both rolled a 5.  I ended up using all 5 re-rolls but Geoffrey lost 3 of them (unused) when the Random Event card 1 came up early in the 3rd turn.

Both Ranger units are still absent.

My second veteran Brave unit that had scouted the far side of the right-hand side of the board starts back - taking the opportunity to melee the remaining Grenadiers (after throwing tomahawks ... again to no effect ... primarily because the Indian shooting dice haven't been very hot).  Both sides take casualties (single Grenadier left and single Brave) ... but the Grenadiers inflict one more casualty then the Braves ... who end up routing.  Two Braves remaining from the first melee with the Grenadiers manage to mop up the last survivor with some well placed musket shots (from the protection of a nearby wood).

The Braves moving up the left-hand side of the table achieve the far side sector and scout it.

At the end of the turn all sectors have been scouted.  At this point the British have suffered 13 casualties while the Indians have suffered 14.  Time to get 1/3rd of my force off the table to win (before I take 16 casualties).

Turn 3
Random Event: 44 - A leader is born:  Randomly determine a unit.  One of the figures of that unit becomes an Officer, and counts as a separate unit from now on.
*This ended up randomizing to the unit of Civilians (ha!) - so a new Civilian Leader was born ... and promptly hid in the house with the rest of the Civilians ...

One of the Ranger units shows up!

Not much to say for this turn.  The Braves dropped everything and high-tailed it towards their table edge.  I was able to exit 9 figures quickly (leader, 6 x Indians and 2 x Indians).  I had 4 remaining Indians by the stone wall who made it back - once they exited the game ended in an Indian victory.  The side plot was achieved for the Indians as the Morale card had not been resolved during the game.

A valiant defence of the village by Geoffrey ... all civilians survived ... but since I achieved by sub plot, he did not.