I got my vehicles back from the weathering master Seth Amsden and they look great.  This completes the German vehicles that I need for my Hell's Highway game I'll be running at the Pacificon Game Expo on September 5th.

I'm really happy to see my custom build Bergepanther all done.  Pictures below as usual.

I just finished painting camo and doing the decals on the bulk of the British vehicles yesterday and they've been dropped off to Seth for more of his master weathering ... so looking forward to getting those back soon.  I still have to finish some universal carriers - they slowed me down because I have to paint the crew before I have glue the fronts of the hull on ... so getting there.  Bouncing between painting the crews now and painting ships for the Lepanto game I'm also helping with at the upcoming convention ... so steady progress.
Posted by Jay White at 9:57 AM 8 comments:

Ahoy!  I was able to get in a game of Galleys, Guns & Glory today with Dan Kerrick.  I pulled out the majority of the fleets I have done for each side (and combination on my own painting and ships I commissioned with Thomas Foss).  I finished painting my Galleass recently and used it during this game in the center command for the Holy League fleet.  After sorting out the crew for each ship, laying down my sea mat and pulling out some dice it was off to battle.


We played 5 turns.  On the Christian right wing the Turkish ships came on strong.  Firing was conducted primarily at long range with very limited effects.  The Knights of Malta proved their resiliency in melee as the Turkish ships first rammed then boarded the Maltese ships but were repelled.  By turn 4 the Turkish left wing had collapsed with all ships est ablaze!

The Christian left wing was a little touch and go due to effective fire from the closing Turkish ships, however the Venetian Lanterna made all the difference in bringing the flank under control and breaking the Turkish right wing, but at a cost of the Venetian and Genoa galleys.

The center was hard fought.  The Christian reserve angled for the gap between the center and right wings, but was met by flaming Venetian and Turkish galleys screening the flank of the advance of the Turkish center.  The Galleass was lucky enough to close with the nearest Turkish galleys and unleash several volleys due to good rolling on the reloads.  Unfortunately the central Turkish galleys were able to ram and board the two Venetian galleys and set them ablaze.  Both Spanish galleys from the center were reduced to their last crew.  The Turkish galleys all angled towards the Venetian Galleass, which by the end of the game was about to be boarded by superior numbers.  Unfortunately due to burning wrecks the Christian reserve wing would not arrive in time to do much to support the deteriorating situation in the center.

Lots of pictures below of the action ... 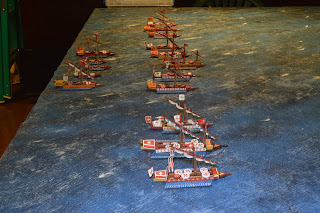 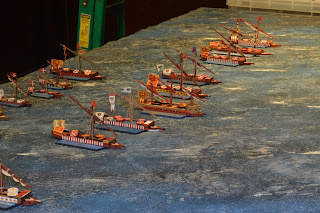 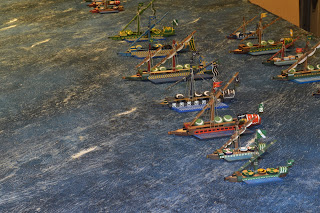 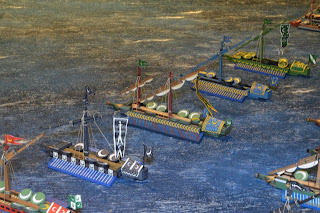 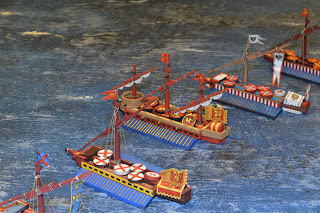 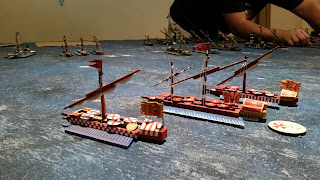 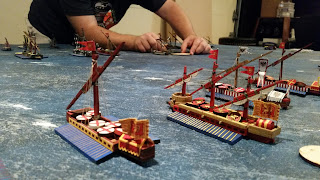 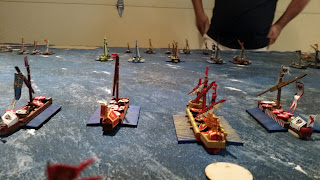 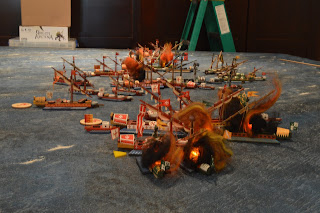 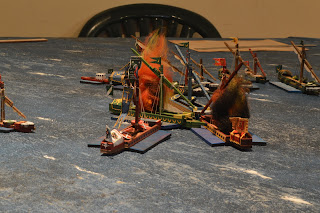 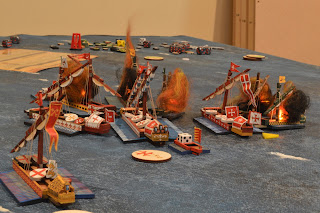 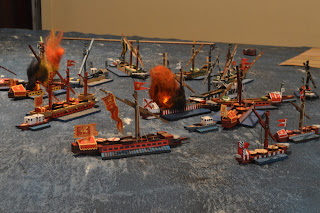 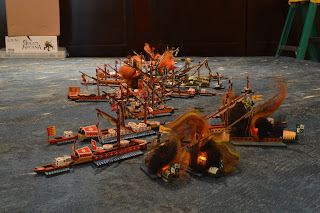 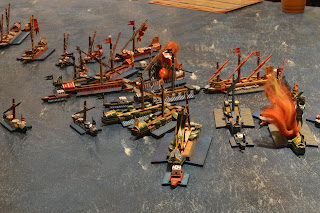 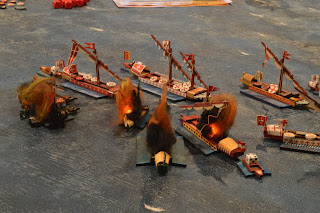 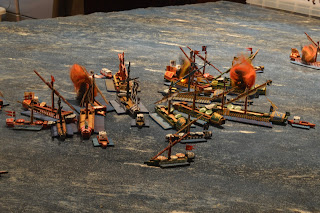 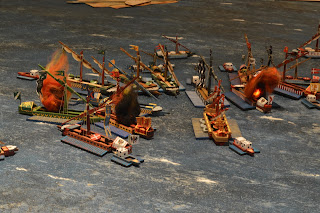 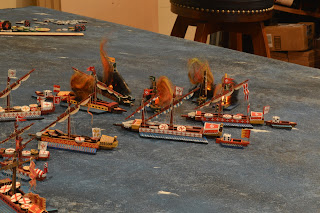 A great game overall.  I know Thomas is quickly putting the final touches on the rules.  I have more ships to paint for both sides and lots of crew to reorganize and touch up.  I should have around 30 ships per side (perhaps a few more than that) one it is all said and done.  This game took us (both first time players) around 3 hours (with just about 40 ships on the table).  I'd say that is really good!

Onward to our Lepanto game at the Pacificon Game Expo and back to putting decals on British vehicles for my Hell's Highway game!
Posted by Jay White at 9:45 PM 9 comments:

I'm excited for the Pacificon Game Expo that is coming up on September 4-7.  One of the big games I'll be co-running and playing in is a battle of Lepanto game done at 1/4 size (that's a heck of a lot of ships!).  I'll be bringing my 46-50 ships - currently I have 46 done (42 done by commission by Thomas Foss and 4 ships I've done myself since getting them last week).  This game is fast paced, fun and deadly - I'm really looking forward to it!


So, what about these ships then?  Skull & Crown offers a full range of laser cut birch plywood ships that cover all the main ships and factions involved in the period (Venetians, Spanish, Papal States, Genoa, Knights of Malta, Turks and Corsairs).  There are ship models for Galleass, Lanternas, Galleys and Galiots (and Fustas which don't have any game effect but are used behind the ships to hold two dice indicating how many hull points remain).

In this post I'm going to paint up a regular Turkish Galley.  The pictures below along with their captions will guide you through the steps I used to paint up this particular Galley.  I've also included some additional photos of the other Galleys I've painted up as well.  All paint references are for Wargames Foundry paints unless otherwise specified.

If you want to see the large number (42) of ships Thomas Foss did for me, check out his post here (here be more pictures!).

So there you have it folks.  That is how I'm painting up my ships for Galleys, Guns & Glory!  I'm really happy with the results.  Pictures don't do the ships justice when you see a fleet arrayed before you and ready for action!  I'll of course post lots of pictures from Pacificon of the many games I'll be playing in and running.
Posted by Jay White at 9:27 AM 6 comments: