The next quicky is up for GameTime on YouTube.  In this quicky I talk through a comparison between Muskets & Tomahawks and Brother Against Brother.  You can watch it here: http://www.youtube.com/watch?v=uTiIVepcjTk or embedded below.

I've also included a written comparison below the video as well.


A quick update on GameTime episode 3 - it will post this week, if not in the next couple of days.  Parts one and two are all ready to upload, I'm just waiting to finish filming/editing part three.

A little more of a comparison of the two systems:

M&T:  Units range from 6-12 figures as stipulated in the army lists.  Army lists included are for British (F&I and AWI), French (F&I and AWI), German (AWI), American (AWI), Indian (F&I and AWI), and Civilian (F&I and AWI).  Each unit, it's options, traits, talents, etc. are use a point based system to create equivalent army lists.  Rules for a firing line provide benefits to regulars forming a single or double line with at least 6 figures.  All units can skirmish, however only certain units (most notably Indians and most irregulars) have a scout trait (ignore difficult terrain and obstacle movement penalties).  Officers are included by troop type and generally can only benefit troops of their own type (for example, a regular officer can provide benefits to any friendly regular unit).

BAB:  All units are 10 figures strong.  No army lists are included.  No points based system.  Officers are included based on the number of units in the army.  Generally one officer commands 2-3 units.

M&T:  Uses a deck of cards that provide actions for unit types (regulars, irregulars, Indians, artillery, etc.).  Most units get 4 actions per turn, however the order in which those actions come up is randomized by the order of the cards.  Actions include move, reload and shoot.

BAB:  Uses a deck of standard playing cards where each card is assigned to a specific unit in the army.  Two cards are resolved at a time (if conflicting in their actions, roll off to see who has initiative).  Actions include move, fire, load and charge.

M&T: Each figure has a fixed movement characteristic.  Each individual figure takes it's own movement and suffers terrain penalties/benefits individually.  Each unit has a unit leader and models in the same unit must remain within a single move of the unit leader.  Scouts ignore difficult terrain and obstacles (of man height or smaller), and treat very difficult terrain as difficult.

M&T:  Shooting muskets is 0-4" point blank, 4-12" effective, 12-24" long range.  To-hit uses the units shooting characteristic, modified by shooting modifiers (terrain, range, etc.), and once hits are scored, the weapons firepower determines was is needed to "kill" the targets.  Kills trigger a reaction test (morale test).  Troops are marked with black powder markers and must spend an action to reload before being able to fire again.  Models are fired individually, so it is possible to have part of a unit reload and part of it firing in the same activation.

BAB:  Shooting muskets is 0-10" effective, 10-20" long range.  To hit is based on a D10 system (remember, 0's are zero's and not 10's).  To-hit is based on the terrain the target is in - open, soft, or hard cover - and modified by the usual circumstances.  Each hit cannot be saved and results in a casualty and subsequent morale test.

M&T:  Any unit can use a move action to engage one or more targets in melee.  Units must take the most direct path, maximize both attackers and defenders, and may use thrown weapons prior to engaging the target (throwing "tomahawks" and charging can be done in a single action).  Up to 4 models can engage a single model if there is room.  All attackers in base contact and all defenders in base contact roll attacks (need to score >= aggressiveness to score a hit).  Once hits are determined, the defence value for each unit is used to determine saves.  Side suffering the most casualties must take a reaction test.  So long as units remain engaged additional rounds of melee are fought until one side prevails.  Additional rounds of melee allow for figures from the engaged units to move/maximize/consolidate models between rounds of melee.

BAB:  A unit leader must be within 6" of an officer to declare a charge.  Attacker must resolve a morale card before being allowed to charge.  If passed and contact is made, defender must take an immediate morale test an apply the results.  If passed, attacker moves models into contact normally.  Up to two models can fight a single enemy.  Each engaged model is resolve individually.  2-on-1 melee is fought with a "free hack" from the second attacker, who needs to beat the score rolled by the defender on the "first" melee roll (all D10 based).  Higher score wins, lower is removed as a casualty.  Melee continues on ties.  Melee is fought on an "individual" model basis ... figures that become un-engaged can take other actions as normal, or re-engage other enemy models still in melee.

M&T:  Morale is represented by a reaction test.  The result needed to pass depends on the unit type (regular, irregular, indian, millitia, civilian, etc.).  Potential results are ok (test pased), recoil (unit makes a full move away from the enemy, remains facing enemy, activates as normal), flight (unit makes a full move away from enemy, faces away from enemy, unable to take actions for the rest of the turn, automatically recovers at the end of the turn), rout (the unit is removed from play).

BAB:  A generic morale deck is used to resolve morale tests.  Units required to take a morale test pull a morale card at the beginning of their next activation.  Potential effects are thwacks (unit leaders or officers are killed), or units test on a D10, subtracting either all or 1/2 of the remaining number of figures in the unit.  A 0 or less is a pass, anything positive is a failure.  If failed, the number failed by results in that many figures "skeedaddling" (essentially being removed from play).  For example, I roll a 9 and subtract my 7 remaining figures, the result is 2.  2 figures are removed as they "skeedaddle" away (there are also rules for these models running away ... with the potential to rally them later).  Random events are also resolved by the morale deck.

M&T:  A great selection of scenarios is included, side plots add a lot of flavor to the game (side objectives for an officer on each side), talents for officers allow customizing your leaders, and the many traits of units (options) allow unit customization.  Additional rules cover buildings, boats, weather, hidden movement, and more.

BAB:  The primary rule set is written for ACW, but appendix rules cover AWI and F&I.  Officers and leaders can be customized with special rules/attributes.  Additional rules cover forts, boats, and ambush.

For me, M&T is both more accurate to the period of the 18th century, and far better written (I'll note that BAB is older, being released in 1997, whereas M&T was released in 2012).  I do enjoy the games of BAB I play in, but given the choice I would always personally play M&T.  The Studio Tomahawk forum provides excellent support for M&T - from rules clarifications, FAQ, additional scenarios, battle reports, alternate lists, and more.  I have not found the same level of support in existence for BAB.

Had a great "president's day" wargame this past Monday.  Matt, Tibor, Roy and I all got together and played an American War of Independence (AWI) game using the Brother Against Brother rules.  It was interesting to see how these rules compared against the Muskets & Tomahawks rules.  I had purchased the Brother Against Brother rules many long years ago and just had never played them - by the time I had my French and Indian War stuff all done I was already playing Muskets & Tomahawks.

Since I don't own any AWI miniatures, Matt was kind enough to bring his collection along - so I provided the terrain and Matt provided the armies for our engagement.  Matt is well known around the area for running spectacular looking AWI and ACW games at the various conventions using the Brother Against Brother rules - I had always managed to just miss his games --- so for me this was a game a long time in the coming (oh, the waiting!).

Tibor and I ran the British forces, that consisted of a healthy contingent of Hessian's (and even a native American unit).  Matt and Roy ran the "colonials" --- or rather the American forces.  Here is the breakdown of the forces:

The objectives for both armies was to take a hold the "Terrytown Road" (the central round running down the majority of the table).  It was a bloody engagement that went back and forth at least three times ... but at the end of the day the British eventually secured the road and drove off the Americans.  Lots of pictures below ...


Well - that's it for now folks.  I hope you enjoyed the report.  Now back to my west front town project for Bolt Action --- and now that my table is back out and setup, I can finally film the Muskets & Tomahawks episode for GameTime.
Posted by Jay White at 9:05 AM 18 comments:

Made some good progress over the weekend.  I've finished two blocks now, the hotel complex and the first of five two story building rows.  The finished two story row of buildings is pictured below.  I finished the backyards, put some odds and ends I had laying about (wagon wheels, ladders) and added some bushes.  Roofing tiles have all been added, and all the corners have been touched up with base paints. 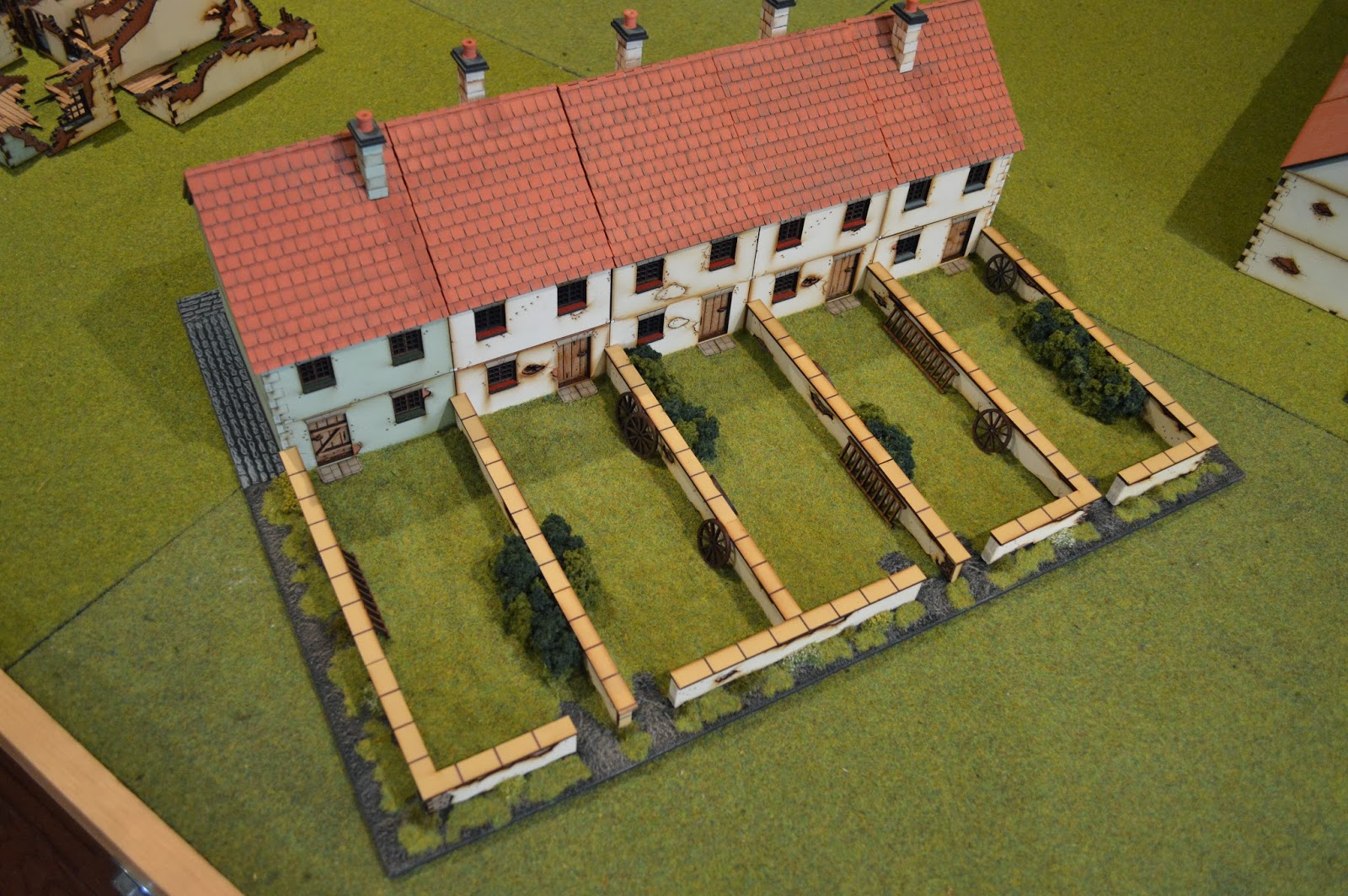 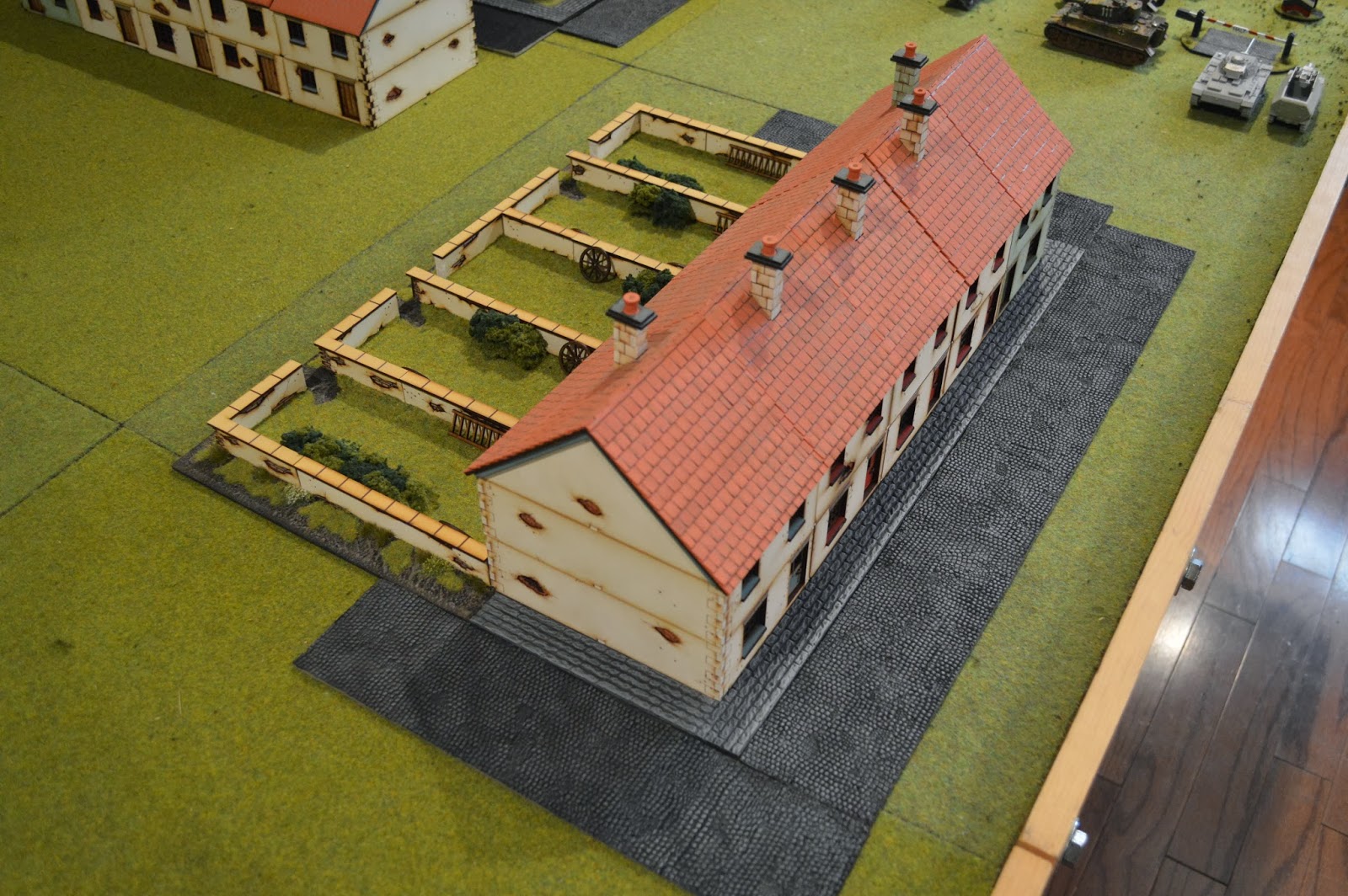 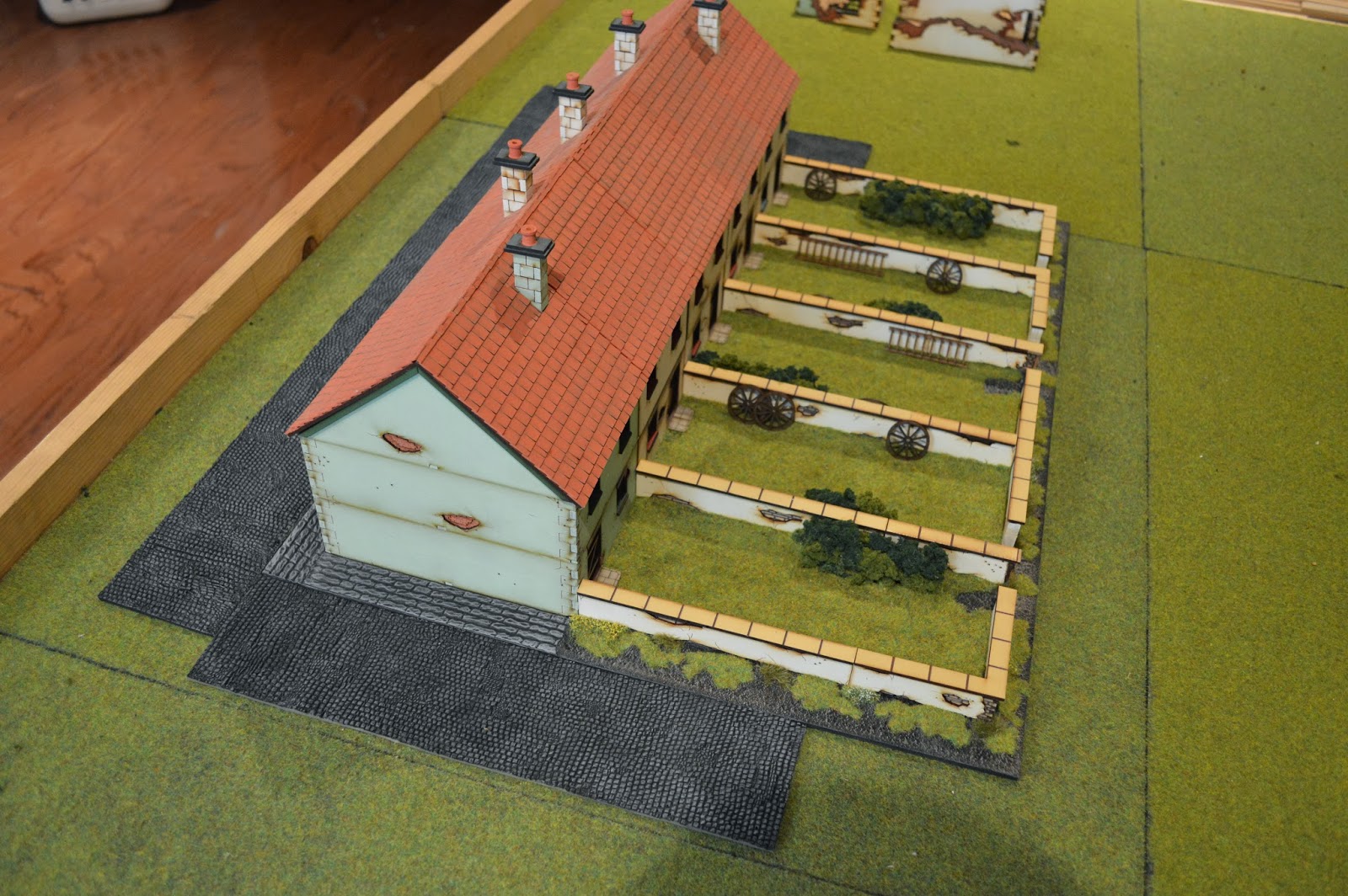 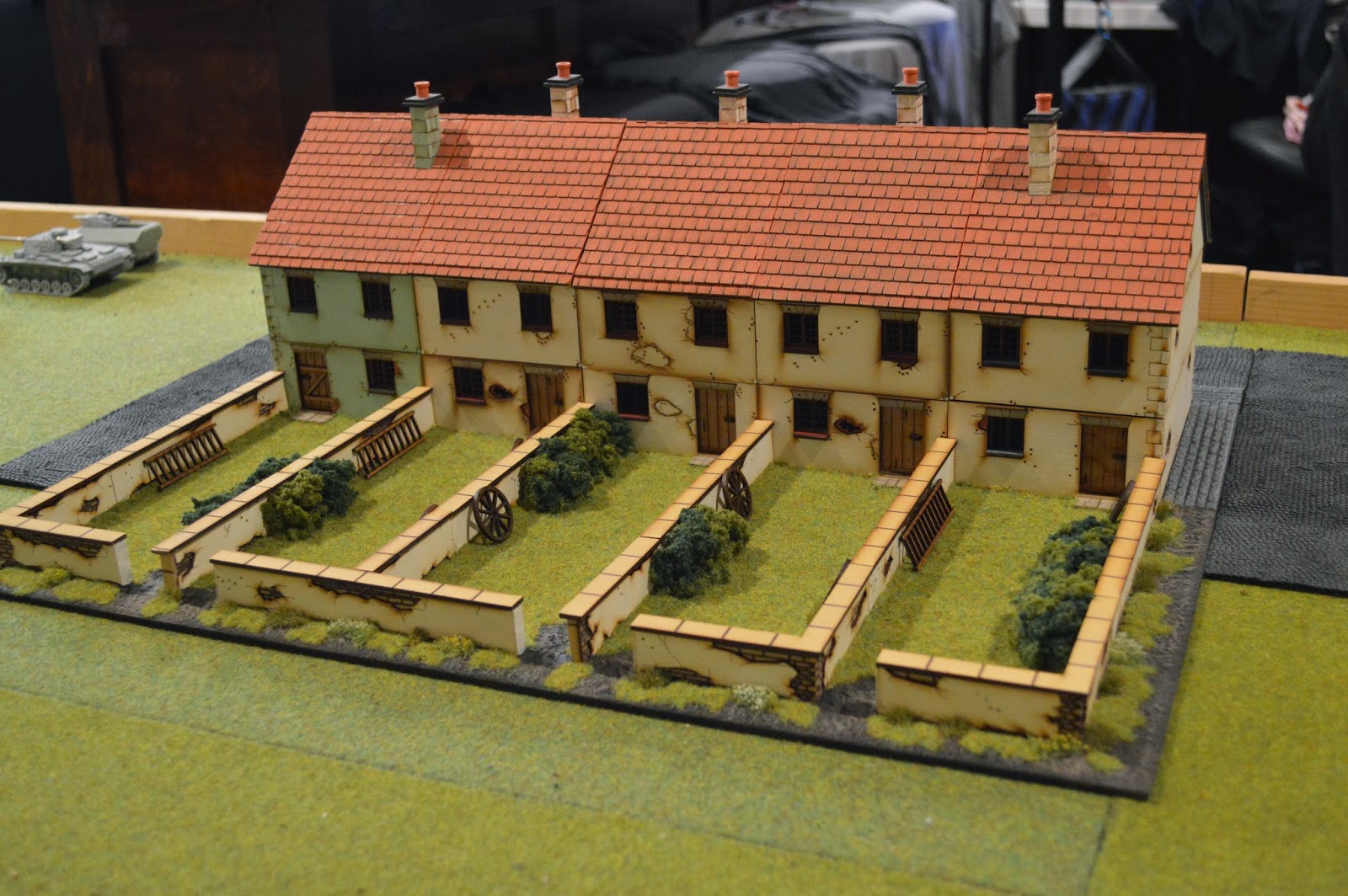 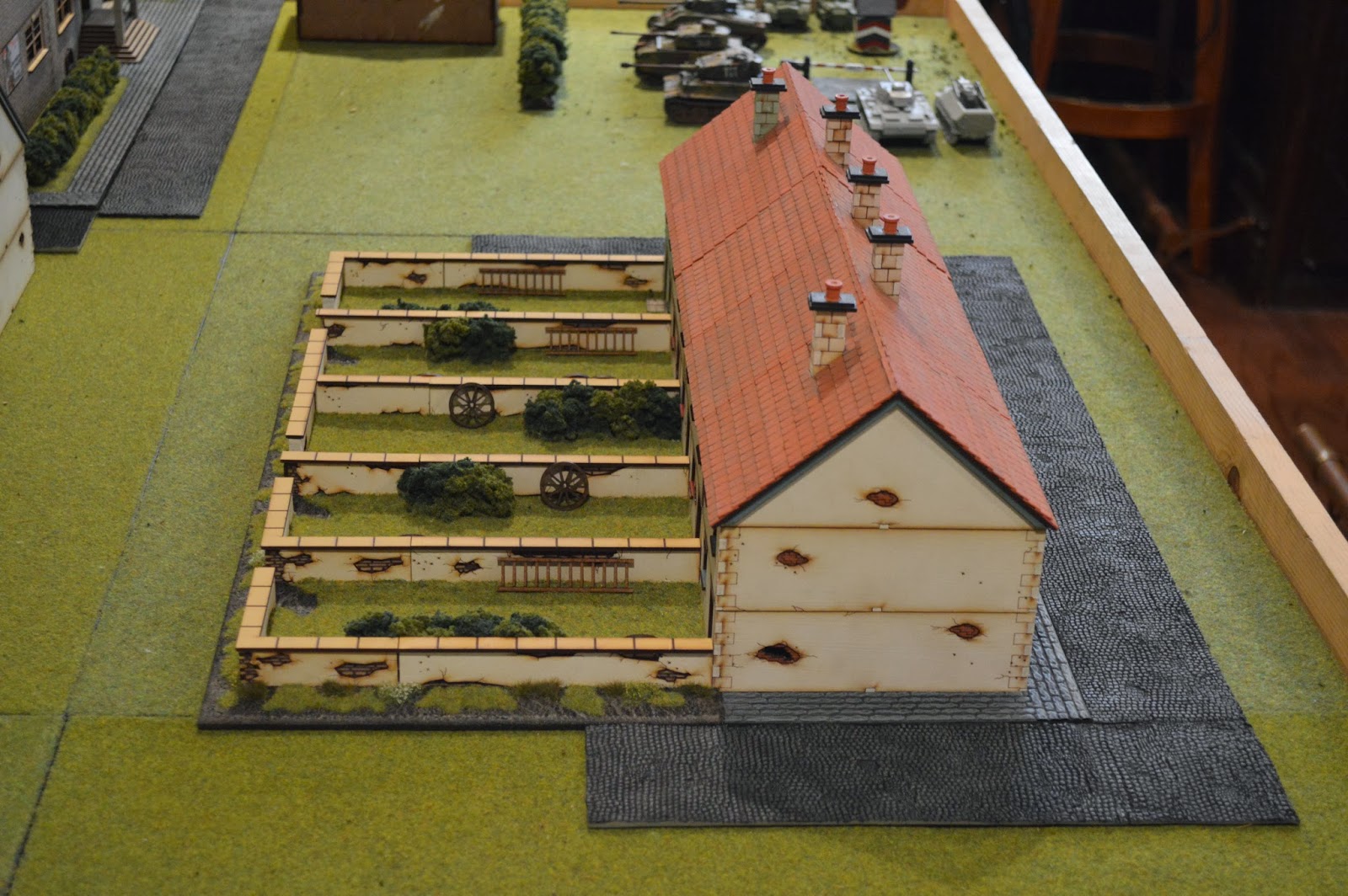 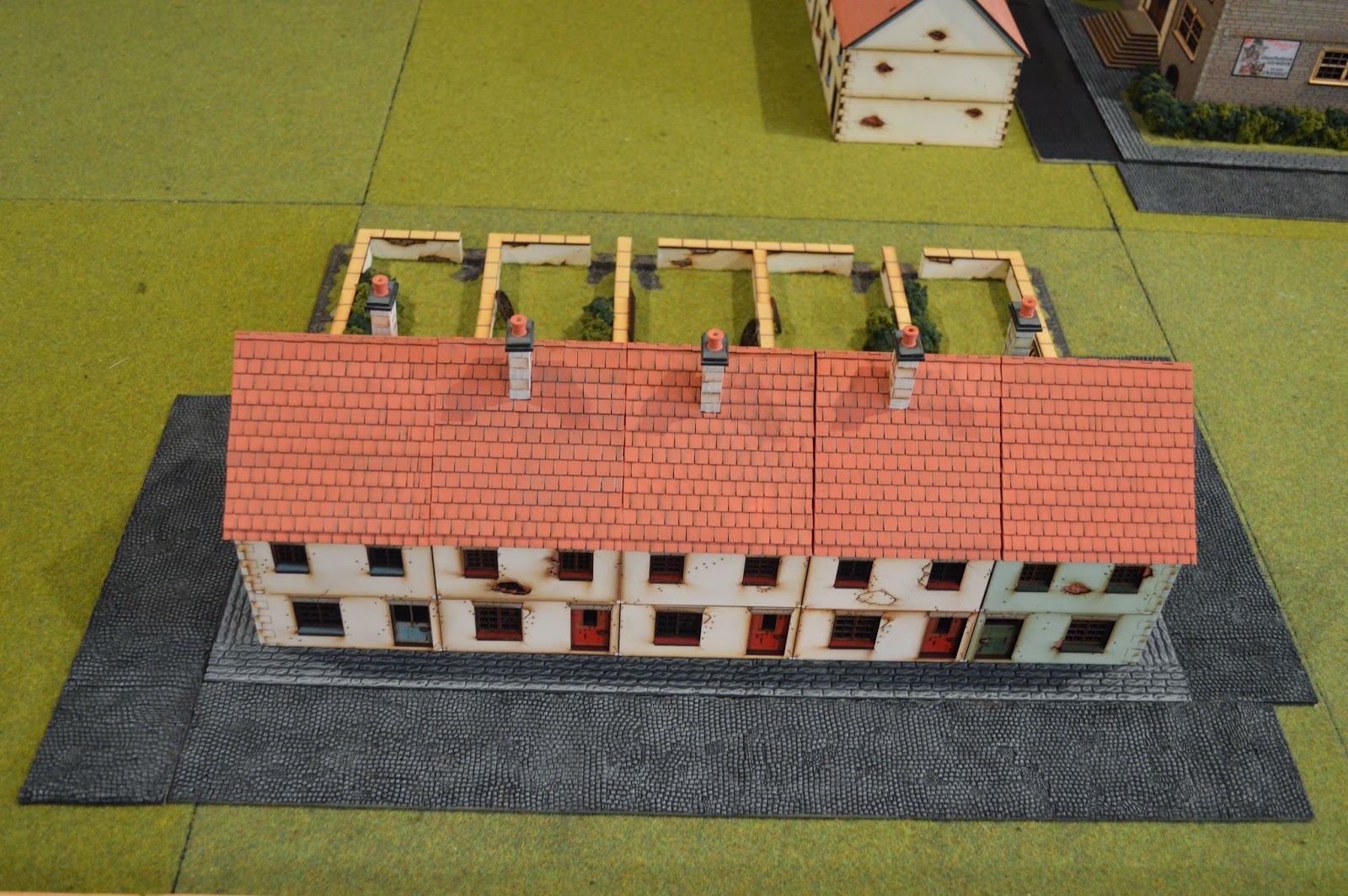 The hotel is still waiting for the final roofing tiles, but I've finished everything else (base paint touch ups, added German propaganda posters to the building, etc.).  Pictures below (taken before I finished the two story block above). 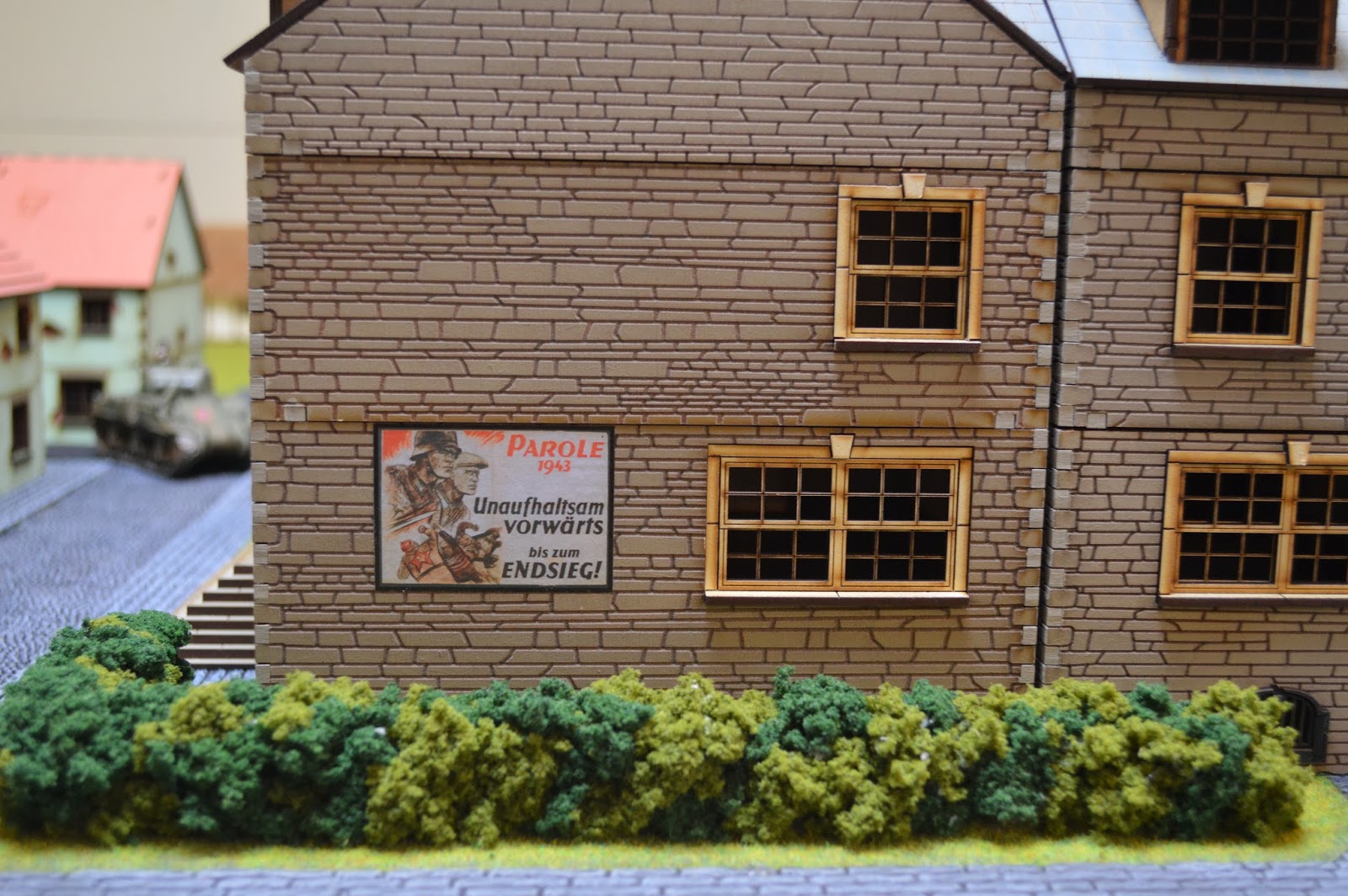 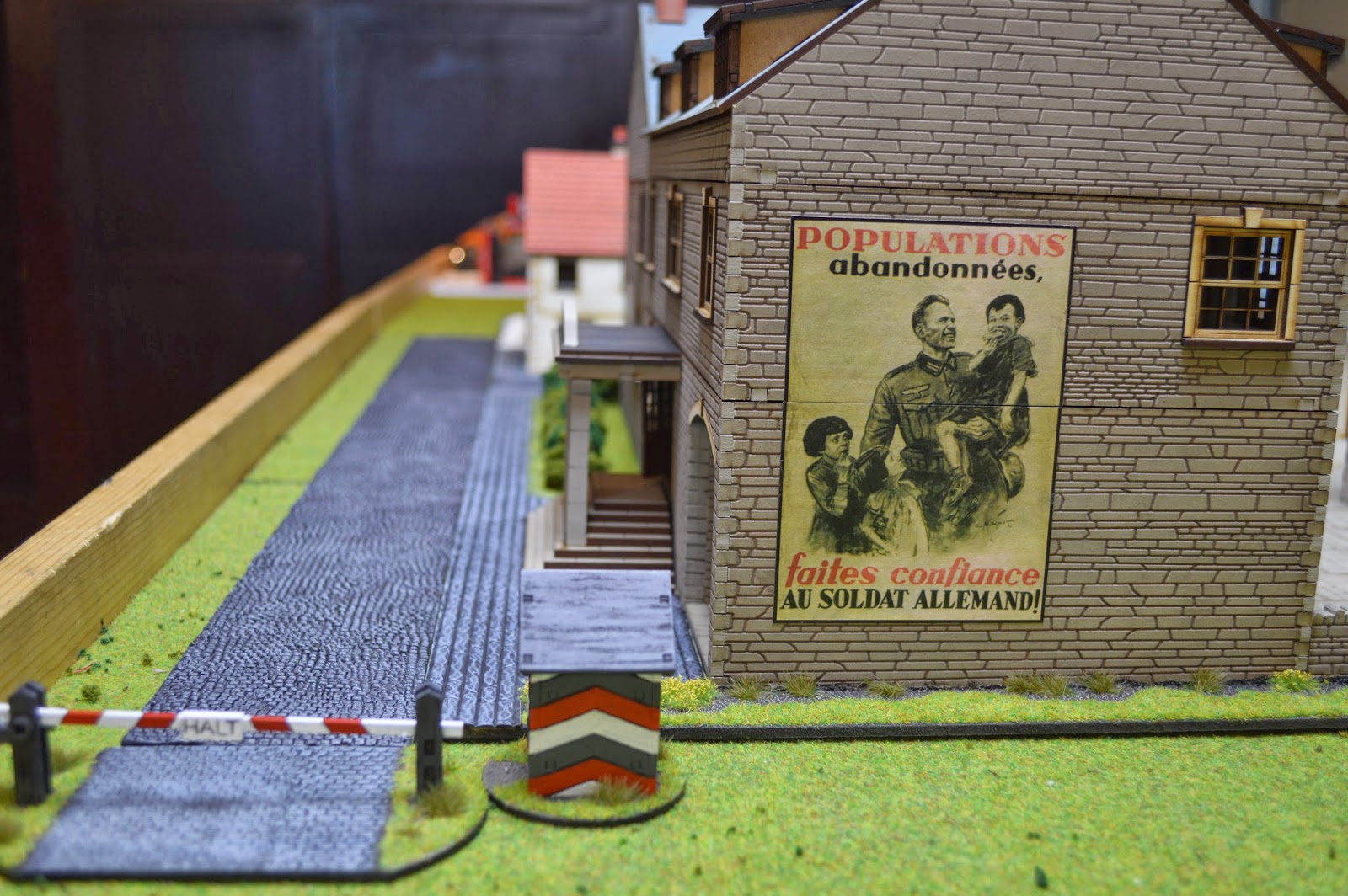 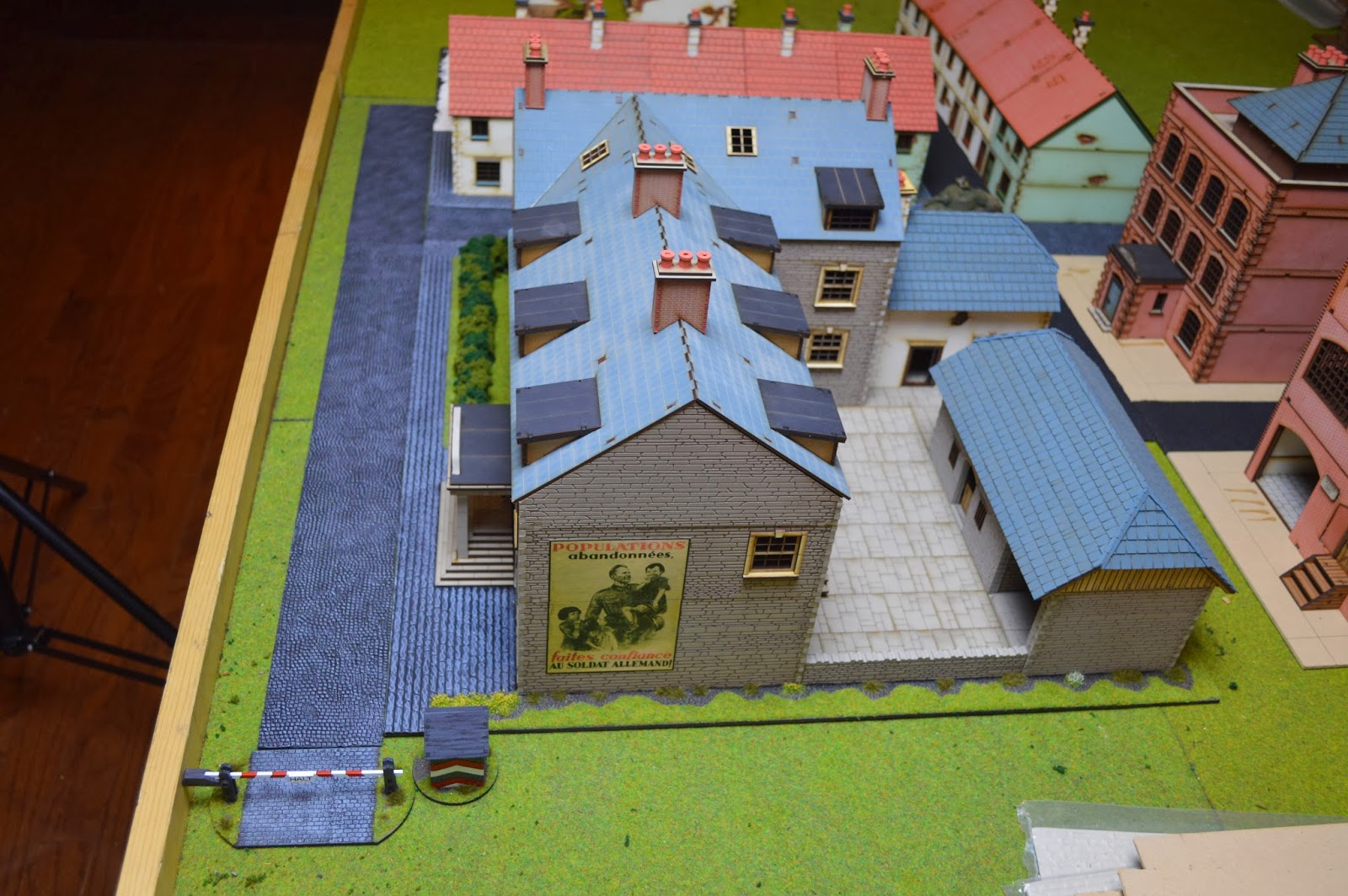 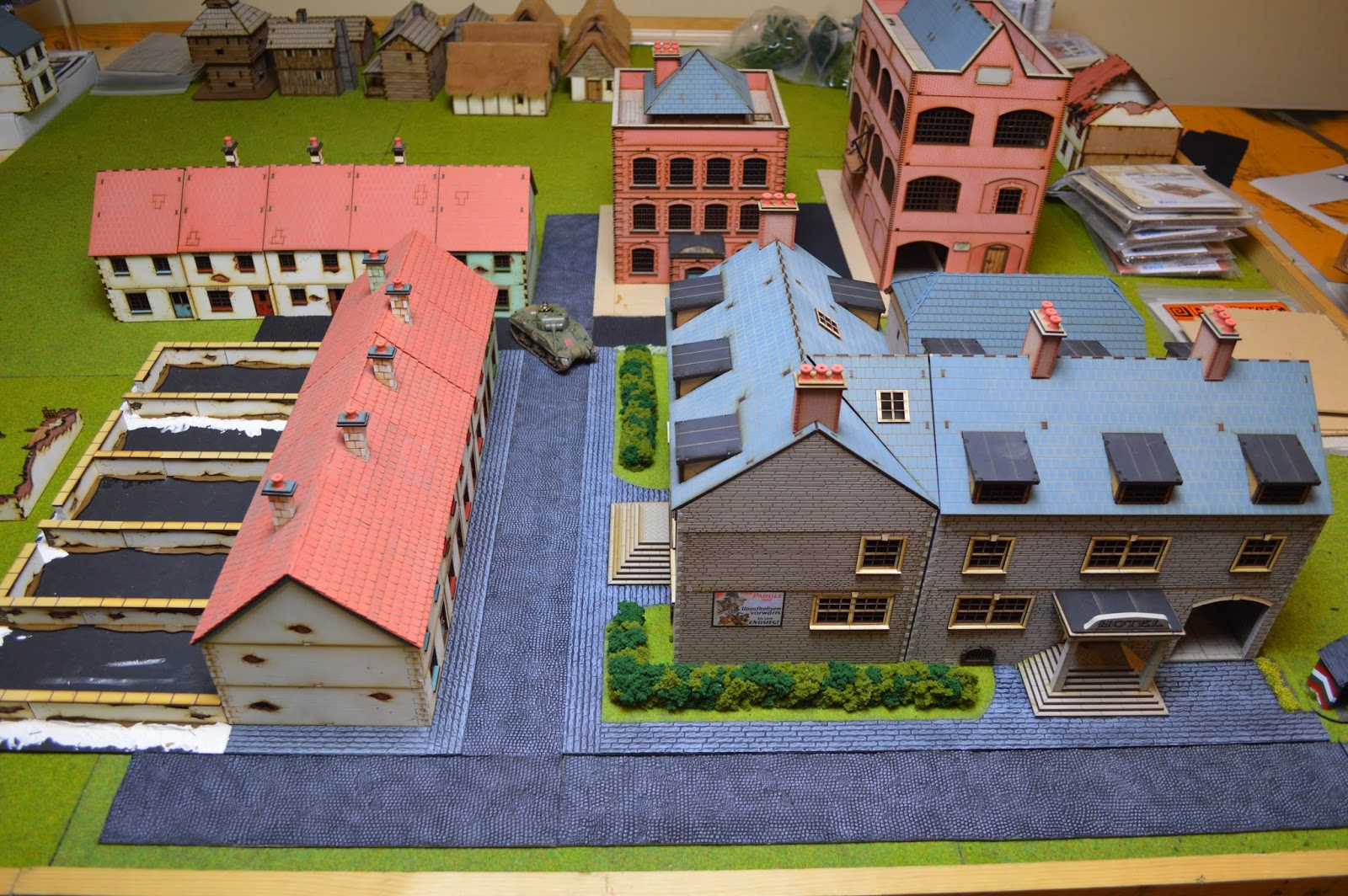 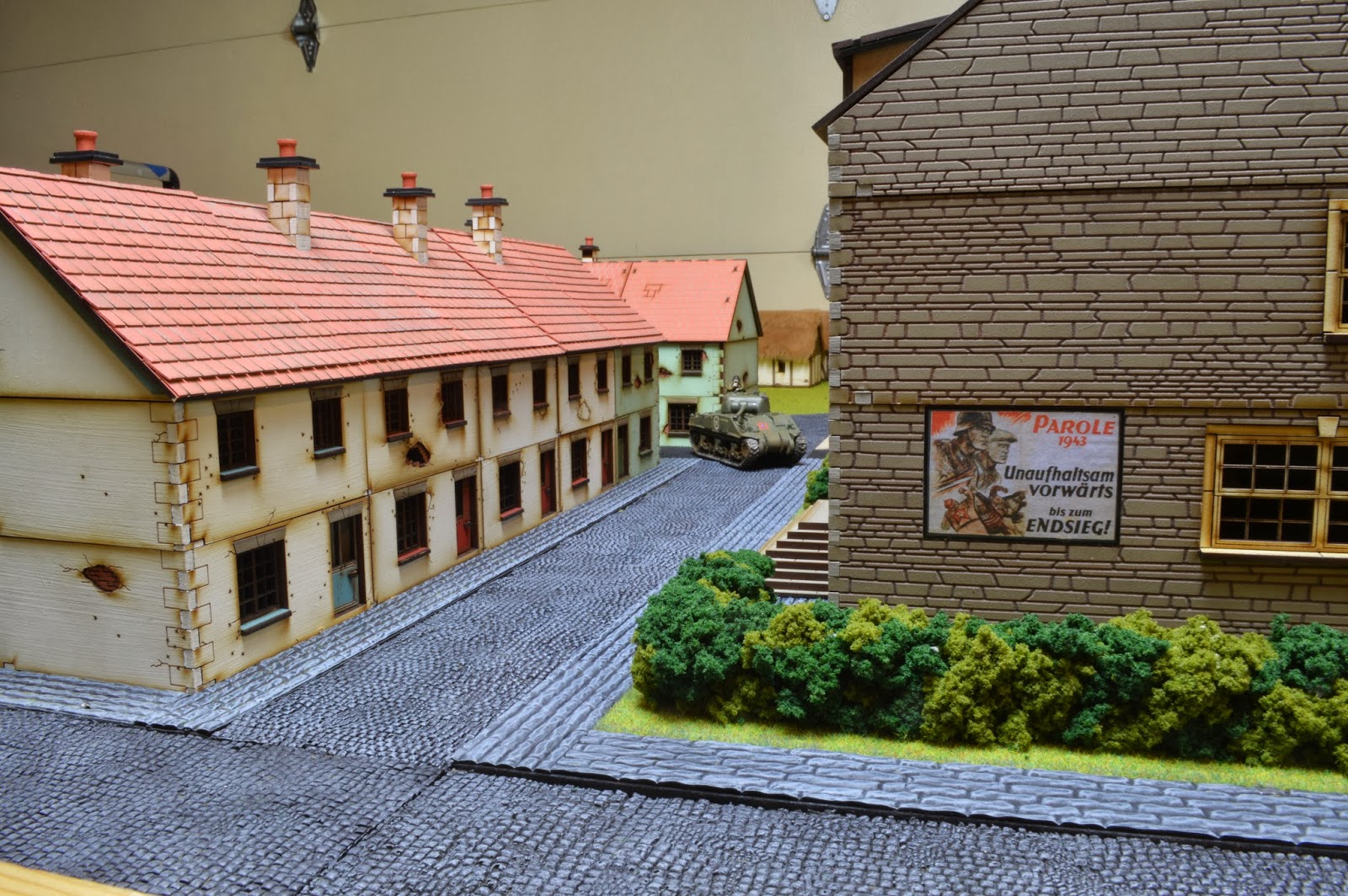 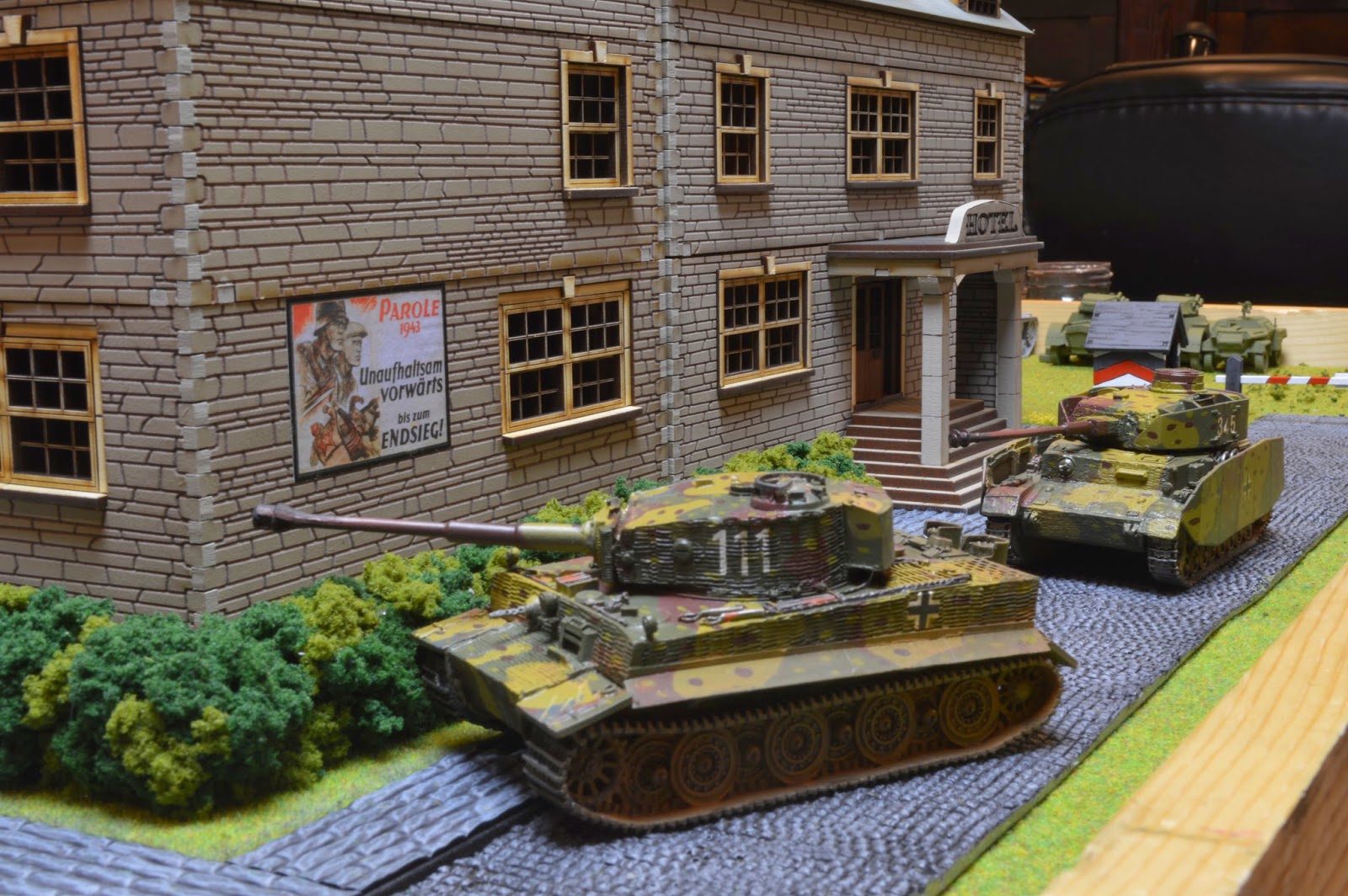 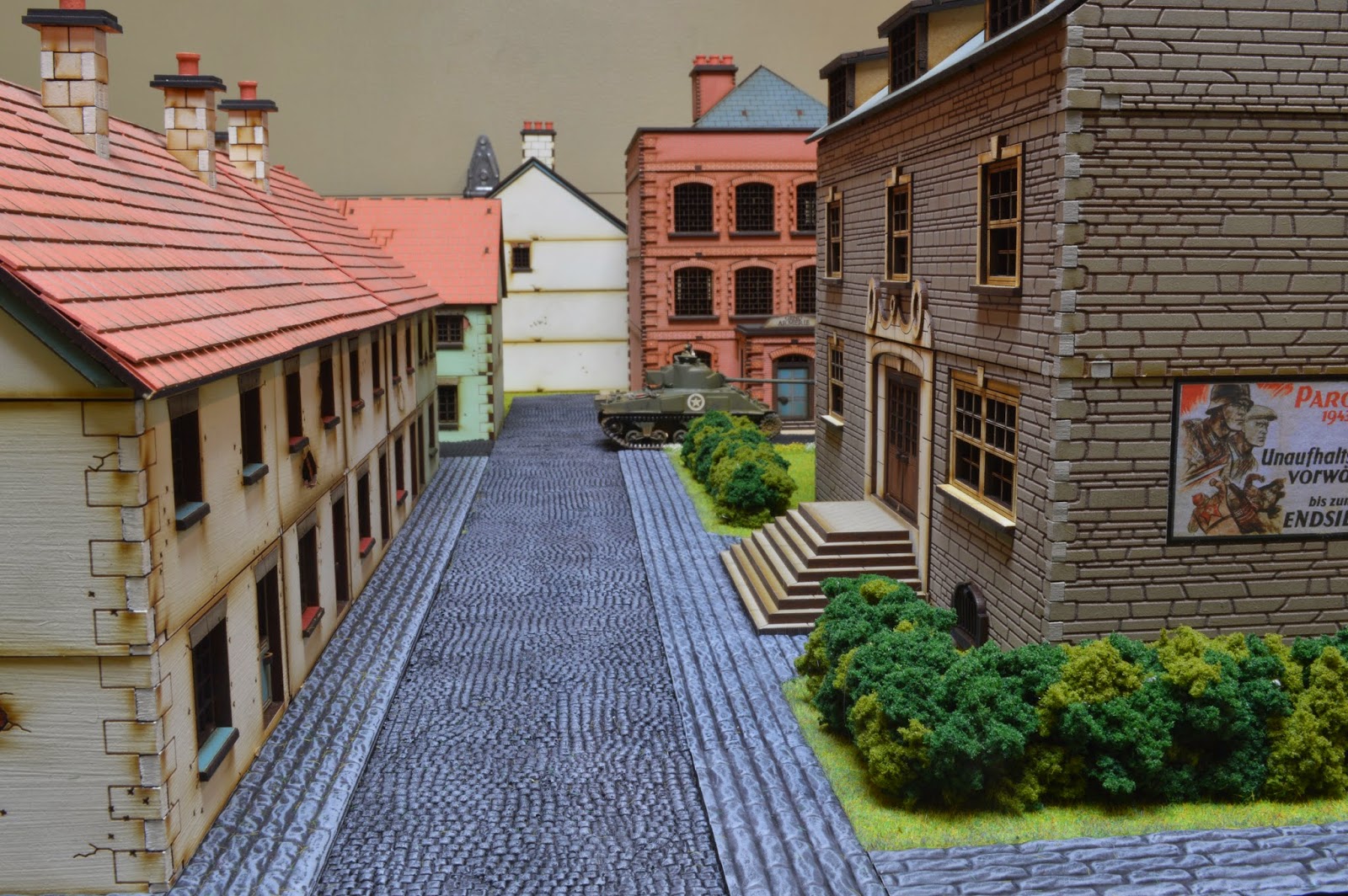