These new miniatures really open up lots of interesting scenario options now.  I look forward to getting them onto the tabletop here shortly.
Posted by Jay White at 6:45 PM 14 comments:

Alright!  The French infantry platoon is based and ready for action.  Pictures below as usual.  All figures are from Eureka Miniatures.  The platoon has an officer, medic, 3 x infantry sections, 2 x Milan ATGM teams, and a marksman/sniper.


Once the French vehicles are done (in about 2 weeks) I'll be all set for my modern game at PacifiCon.
Posted by Jay White at 6:38 PM 10 comments:

The Russian vehicles are essentially done ... I have a few small details to do (white numbers, some radio whips) but they are operational at this point.  Pictures below.  I didn't take pictures of every tank and IFV as there is little difference between them ... so I just picked one and took pictures.  As you can see below the entire Russian force has filled out nicely.

The vehicles are finally assembled.  Lots of parts and a lot of work to get all nine vehicles assembled.  The French infantry are back from Steve Dake and I'm in the process of basing them now.  Couple of "not so good" pictures below ...

With the Russians essentially done and the French nearing completion, I'll be looking to spend more time on my Canadians.  That being said, I have made some progress.  First, I submitted my pre-order for the Canadian infantry models from Full Battle Rattle Miniatures.  I think they are supposed to ship near the end of August, so not too far away.

I used my "3D" guy to build out a 3D model for a Canadian G-Wagen in 1:50th scale.  I then uploaded the file to Shapeways and got it printed off.  I'm happy to say that was a resounding success.  I'm pleased with the outcome and have ordered an additional two vehicles (they are ~$30.00 each).

Pictures below of the 3D model (with Leopard 2A6 from Empress Miniatures for comparison).

Ok, so not specific to my Russia Resurgent project, but neat nonetheless.  When I had Steve Dake do my French I also sent him some odds and ends for my Operation Iraqi Freedom collection.  I've now added some scenario figures (western VIP, middle east VIP, bodyguards, hostages, and a news crew/embedded reporters), some additional RPGs (needed more for my cells), and a sniper figure.

So progress continues.  I'm on track with my PacifiCon plans (September game convention) to run a modern game with Russians and French.  Stay tuned, lots more to come ...
Posted by Jay White at 5:12 PM 8 comments:

Just finished basing my modern Russian infantry platoon.  Special thanks to Steve Dake for turning these guys around quickly.  Russian vehicles are in progress and should be done in a couple of weeks - which will give me lots of Russians to play with.

If you are curious as to the colors here --- the Russians do use digital camo, however - the greens used wash out easily with even a moderate level of wear.  There is a little brown, but there is so little that it washes out even more than the green!


I'm very pleased with the result here.  The platoon consists of 36 figures:

Pictures below.  I use a lot of light when I take my pictures - and I also pump up the brightness in my post-picture taking photo touch ups ... hence the green looks brighter than it actually is in person.

So not a bad start here.  When combined with the armoured vehicles this is a force to be feared.  I'm in the process of finishing the assembly of the French vehicles and the French infantry is also sitting with Steve Dake for painting - so that should be done in the next couple of weeks as well (French vehicles will take a little longer, they'll be next after the Russian vehicles are finished).
Posted by Jay White at 8:57 PM 20 comments:

This is the scenario I'm going to be playing (and play testing) at PacifiCon.  I don't plan to schedule it ... I'll just play it adhoc with my jolly group of fellow gamers (it is easy to get a table on Friday or Sunday).

This scenario is designed for This Hallowed Ground.  The link is to v1.0 ... but I'm making some minor updates and additions (to the units, e.g. Berdan's Sharpshooters are a dedicated skirmish formation not currently represented in the v1.0 rules).  Another big change is that in order to reflect the lethality of the weapons used, I'm doubling the firing dice for each formation.  This worked very well in the recent game we played.

Anywho, on to the scenario ...

This battle really needs no introduction.  Given the scale of the units involved, I've chosen to focus on the advance of Pickett's division.  Trimble's division is considered to be just off table, advancing along with Pickett's division.  The table can certainly be expanded in width if players decide to represent both divisions (although it is already 6' wide).

The following orders of battle are used for the forces involved.

Note:  To represent the strength of the units involved, all Confederate infantry units have their morale values increased to 16/18 for Garnett's and Kemper's units, and 18/20 for Armistead's units.

This scenario uses a 6' by 8' table as pictured below (click the picture to enlarge).

The Union brigades each have units forming a "second line" (reserve) with artillery batteries dispersed throughout the Union lines.  The Confederation artillery is positioned on the hill to the rear of Pickett's infantry brigades.  The open space between the opposing forces contains tall grass fields and other light vegetation and does not limit movement in any way (although the snake rail fencing does present an obstacle).

The following special rules apply to this scenario.

Union Second Line - The 5 Union infantry units that form the secondary line (in front of the Taneytown road) are not permitted to engage forward of their deployment positions until one or more Confederate units engage one or more of the first line Union infantry or artillery units in melee.  Once a melee has been fought, second line units can move and engage freely during their next activation.

Forward Men! - This rule only applies to Armistead (the brigade commander model).  Once per game, before declaring charges, Armistead can declare "forward men!"  Place an appropriate marker (such as Armistead himself with his sword through his hat) by the brigade commander.  Any infantry unit from Armistead's brigade that declares a charge gains a +1 to the charge home test (stacks with Rebel Yell) and any Charge! result on the charge home test is instead considered a Determined Charge!

Extreme Artillery Range - Artillery may shoot beyond their normal maximum range (e.g. 60" for regular artillery).  Any shooting done at this range is considered "extreme range" and requires a D6 result of 6 in order to hit (normal modifiers apply - dice are halved per the normal rules for shooting).

For Virginia - The normal rules for broken brigades do not apply to the Confederate brigades.  Instead, a Confederate infantry brigade is only broken when all units in the brigade at either broken or shaken.  This represents the amazing determination shown by Pickett's division in driving on to the Union position.

I plan to run an ACW game at PacifiCon in September which means I need to get some ACW specific terrain painted up/done.  In order to motivate myself I got together with Roy Scaife and we put out the three brigades per side for the Union and Confederate armies and played a meeting engagement.

I'm in the process of "fixing" my Union flags ... the US flag should be located on the right side of the flag party --- my initial units I have it on the left ... as I work through a bunch of basing I have in progress I'm swapping the incorrect units.

The buildings and fencing are not complete - I need to paint them up.

Regardless of the "incomplete" items, I still think the game looked good and although I didn't intend to post pictures, I figured I'd share anyways.

We've fleshed out the ACW rules nicely by updating them with what we've learned from our Napoleonic variant (Empires At War) that we've now played many times.  Of course, the Napoleonic variant is very different from a unit/national perspective, but the core system is similar.  The ACW rules are "simpler" (no forming of squares and similar that are specific to the Napoloenic era).

Anywho ... for what it's worth ... lots of WIP, but pics below.  Game result was a Confederate victory. 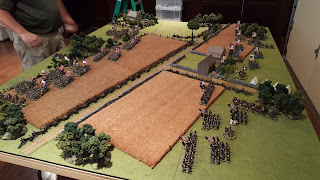 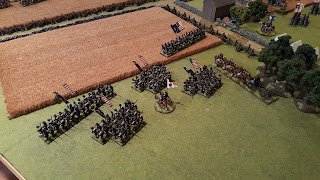 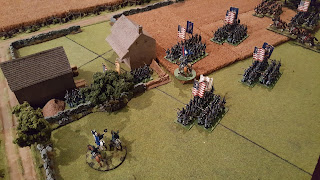 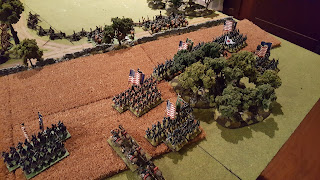 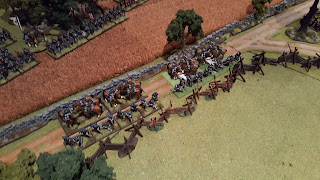 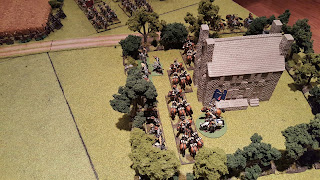 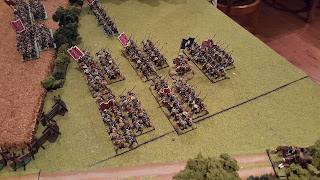 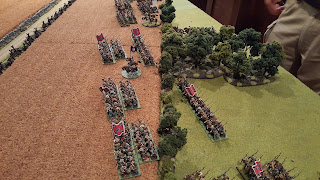 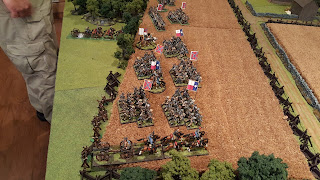 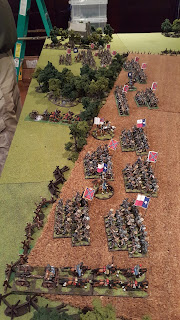 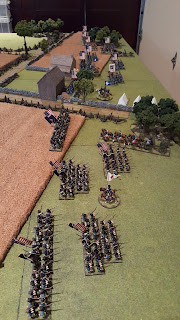 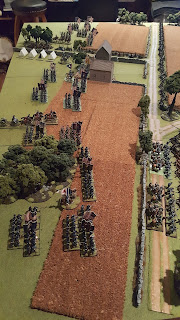 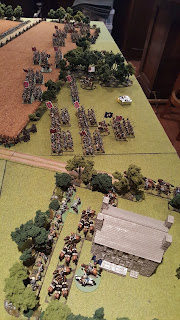 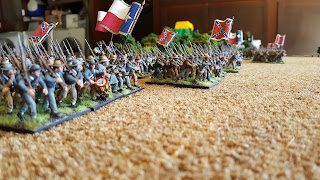 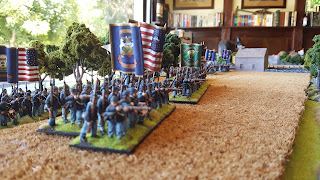 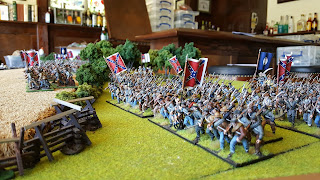 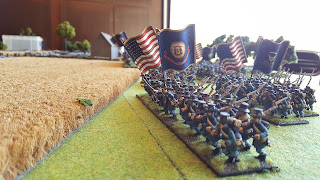 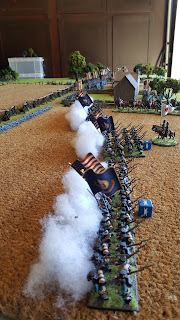 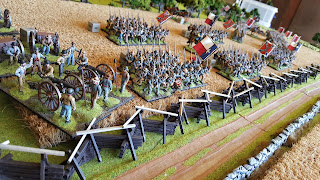 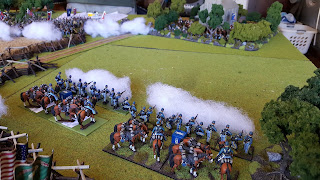 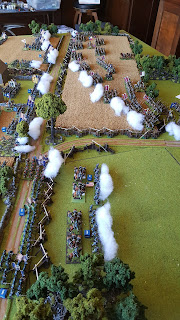 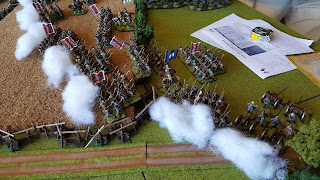 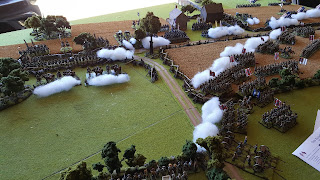 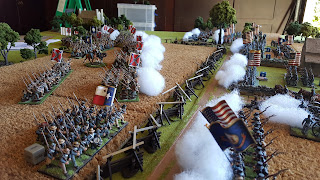 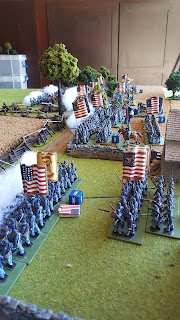 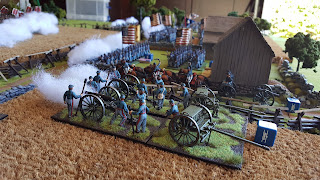 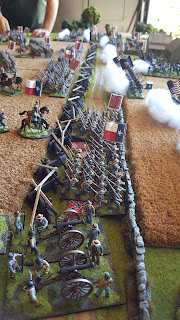 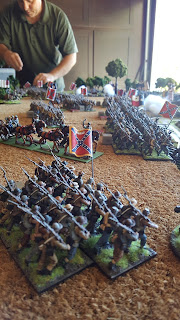 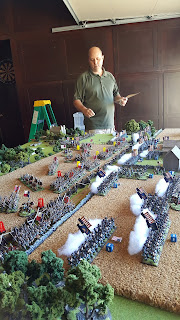 The ACW collection is coming along nicely.  I have casualties and Berdan's Sharpeshooters getting done as well.  I plan to run three Gettysbury related scenarios eventually (first day/Buford's stand and arrival of Reynolds, little round top, and Pickett's charge).

In fact, I'm working on the Pickett's Charge scenario right now ... as that is the scenario I'll be playing at PacifiCon.
Posted by Jay White at 10:43 PM 15 comments: