I recently ran a demo day for Muskets & Tomahawks at the local game store by my place - Game Kastle (Fremont).  Roy Scaife and I ran a couple of games in parallel with some new players who had never played the rules before.  Good news, they bought miniatures and the rules right after the games wrapped up :-)


I did up two scenarios that ran 300 point lists on each side.

British – A French trading post has become a common location for meetings between French officials and Indian tribal leaders.  Your orders are to destroy the trading post and kill any French units in the area. If you come upon any Indian or French leaders they should be captured and returned for questioning.

French – We are meeting with the council of elders that represent the Indian tribes in this area. Make sure the officials remain safe and if attacked your orders are to escort the Indian elder council away from the battle area.  If the elder council is killed or captured that would negatively impact our relationship with our Indian allies in the area. 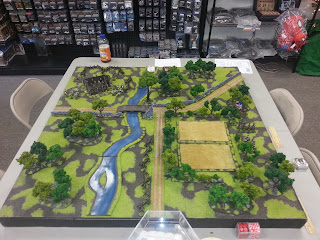 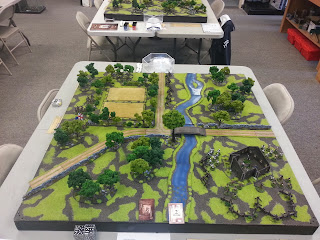 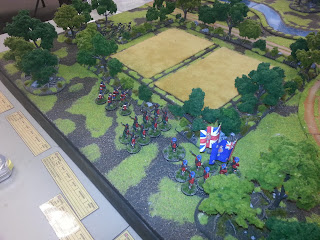 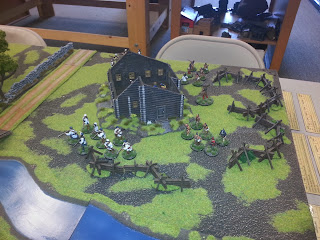 British – A local civilian leader has been highly effective in negotiations with local Indian tribes. We've learned that the French seek to eliminate this diplomat and my be on their way right now to do so. Your orders are to secure the local leader and escort him to Albany. If attacked, save as many of the local settlers as possible as if we leave them to the mercy of the French the local leader will be very upset and may not continue to aid our efforts.

French – A local civilian leader has been causing trouble with the areas Indian tribes.  We must capture this leader so we can turn him to our cause, or if that isn't possible than we should kill him. It would also be helpful to capture as many of the local settlers as possible as we can use them to help persuade him. However, if the locals are not cooperative, kill as many as possible to send a message to those who would work against us. 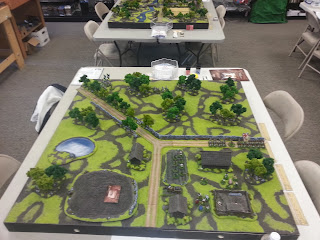 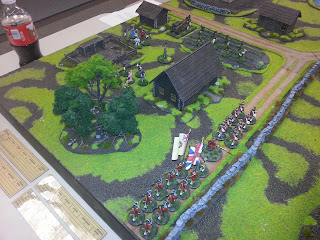 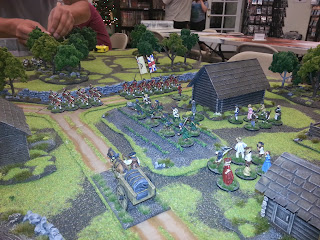 Not your normal layout for M&T scenarios ... but we figured we've give it a try.
Posted by Jay White at 1:31 PM 15 comments:

Hello everyone! Just posted up a "quicky" update for GameTime. For all the people who are following my blog, thanks for joining me this past year. I hope you are all enjoying the holidays and have a great 2014! I certainly have lots of plans for this coming year around gaming. I just ran some Muskets & Tomahawks demos at a local game store (posting pictures/report in a separate post later today).

You can view the Game:Time quicky update by clicking here or via the embedded video below.

Note: All of the Game:Time videos are filmed and uploaded in HD. YouTube does not generally default to HD unless you have it set to do so in your YouTube settings for playback. If you click the little cog in the lower right of the YouTube screen you can select 1080p (if you have a good internet connection) for a higher resolution.


I've been building 4Ground buildings and getting my Bolt Action stuff up and running. I've also very interested in playing through a couple of games of Chain of Command to compare and contrast the two "popular" WW2 platoon level rules. I'm also interested in the hybrid of the two (stealing the patrol phase from CoC for BA ...).

Looking back I've had a great year.  Although work has taken up a bunch of time in the 2-3 months, I've managed to get in a few games.  I ran a Wednesday night Descent campaign (16 games!) that concluded successfully just before Thanksgiving.  We'll likely start up again in the new year as we've had a lot of fun with that game.  I've been playing small games of Muskets & Tomahawks and some other games, but haven't been able to get blog posts done about them.

The next episode of Game:Time is very near completion and we'll be filming an episode on the Game of Thrones boardgame that will be fun as well.  Looking to do Muskets & Tomahawks for the next miniatures game episode ... so stay tuned!
Posted by Jay White at 2:46 PM 4 comments:

I know I promised a post or two in the last couple of weeks, but I have some news to share.  I'll of course still be posting on this blog as I complete projects and play games, but my group and I have also decided to do some web videos about miniature and board gaming.  I'll be posting the episode links as they become available on this blog.  We are planning to do a few episodes for now and we'll see if anyone actually wants to watch.  If so we'll continue producing new videos.  I'm by no means an expert video producer but I think what we've created is definitely watchable.

In this episode we talk about the Viking Horde Papercraft Kickstarter, take a look inside the massive Ogre boardgame box, and play a couple of games of Dead Man's Hand.  Please find the links below to the videos that are posted to YouTube:

Episode 1, Part 1 (of 4): Introduction (10 minutes) - in this part we talk about the Viking Horde Papercraft Kickstarter and take a look at the Ogre boardgame box.

The plan for episode 2 is the play a game of Ogre (alternating between miniature and board games).  We'll are looking to do SAGA, Muskets & Tomahawks and Bolt Action on the miniatures front and Game of Thrones, Zombicide, and Kingsburg on the boardgame front (plans subject to change of course).

Anyways, I hope you enjoy the episode so we can keep making more :-)

Some pictures from the game and setup are below. 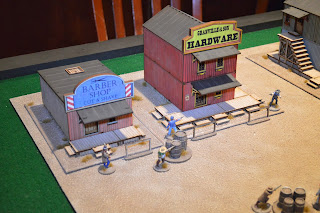 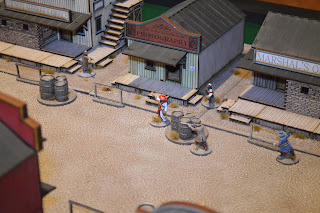 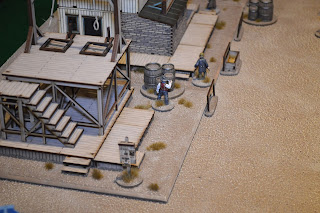 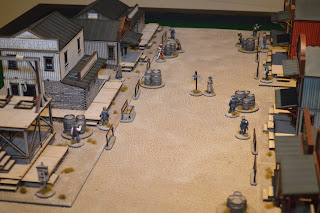 If you do take the time to watch, please let me know if you think this is a worthy endeavor or if I'm just wasting my time.  Cheers and merry Christmas (or whichever holiday you observe, if any) everyone!
Posted by Jay White at 2:55 PM 8 comments: