Finally got around to playing the Rear Guard at Quatre Bras scenario that I converted for Black Powder from the General de Brigade scenario books.  The scenario is going to need some tweaks, but overall we had a good time playing.  With all the Bolt Action games we had returned to being rusty with the rules, but we quickly got back on track after a couple of turns.

Before I dive into the game, I recently came upon a great resource for Black Powder.  In my efforts to see what others have done with Black Powder for ACW specific rules, I stumbled upon the "Contemptible Little Wargames Club" Black Powder resources: https://sites.google.com/site/contemptables/Home/files

They published extensive modifications to the basic Black Powder rules that add a bunch of "period" flavour into both the ACW and Napoleonic conflicts.  Our plan is to use these moving forward and see how we like them ... I think we'll adopt 95% of the changes they've made as I think the play-ability of the game and clarifications around some of the foggier parts of the rules will be a welcome change.  They also have some excellent QRS (Quick Reference Sheet for the unassimilated) sheets for both periods.  I'd also mention that they are for the most part sticking to the basic Black Powder rules ... although at first glance you'll notice some very big changes ... but give it a chance.

Ok, onto the game.  For the most part we played the scenario as it is detailed here.  The only change I made was that both main French infantry brigades used 3 x line infantry and 1 x light infantry units (instead of the one brigade that called for 2 x line and 2 x light).

The Prussians started with a solid advance, until my dice completely failed me.  I started failing critical order tests and rolled and 4+ occasions, 2-4 on break tests (meaning the units broke - destroyed).  The Prussians lost as two of the three brigades broke (within a turn of each other).  The British brigade came onto the board but it was too little too late.  The first modification to the scenario is to start the British brigade on the board between the Prussian cavalry brigade and central Prussian infantry brigade.

Roy and I will be using our normal Wednesday board game night to now play miniature games ... and if a game takes longer than we have on a Wednesday evening then we'll play it over the course of two Wednesdays if necessary.  We really want to play more games --- one of our summer objectives ... and this is the first step to getting several Bolt Action and Black Powder games played out.

Apologies for the pictures --- I took the ones below on my phone, my camera has pictures ... but my transfer cable broke (new one ordered along with a card reader).  When I get those transferred I'll post them up as well as there is some nice pictures on the Nikon D3200 I have.

I need to work on the terrain for my Napoleonic games ... several improvements are planned ... but I used what I had for this game ... nothing too fancy. 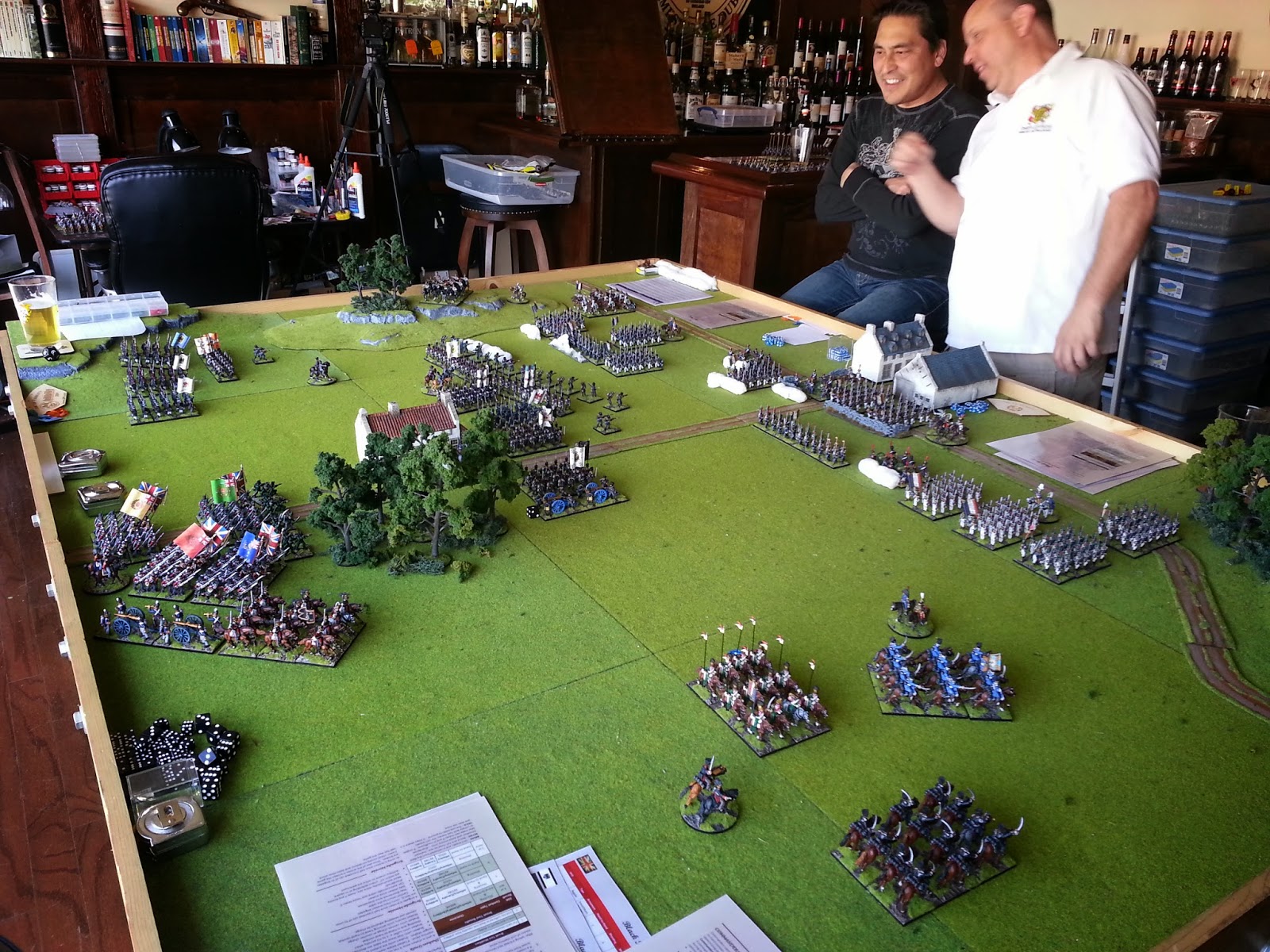 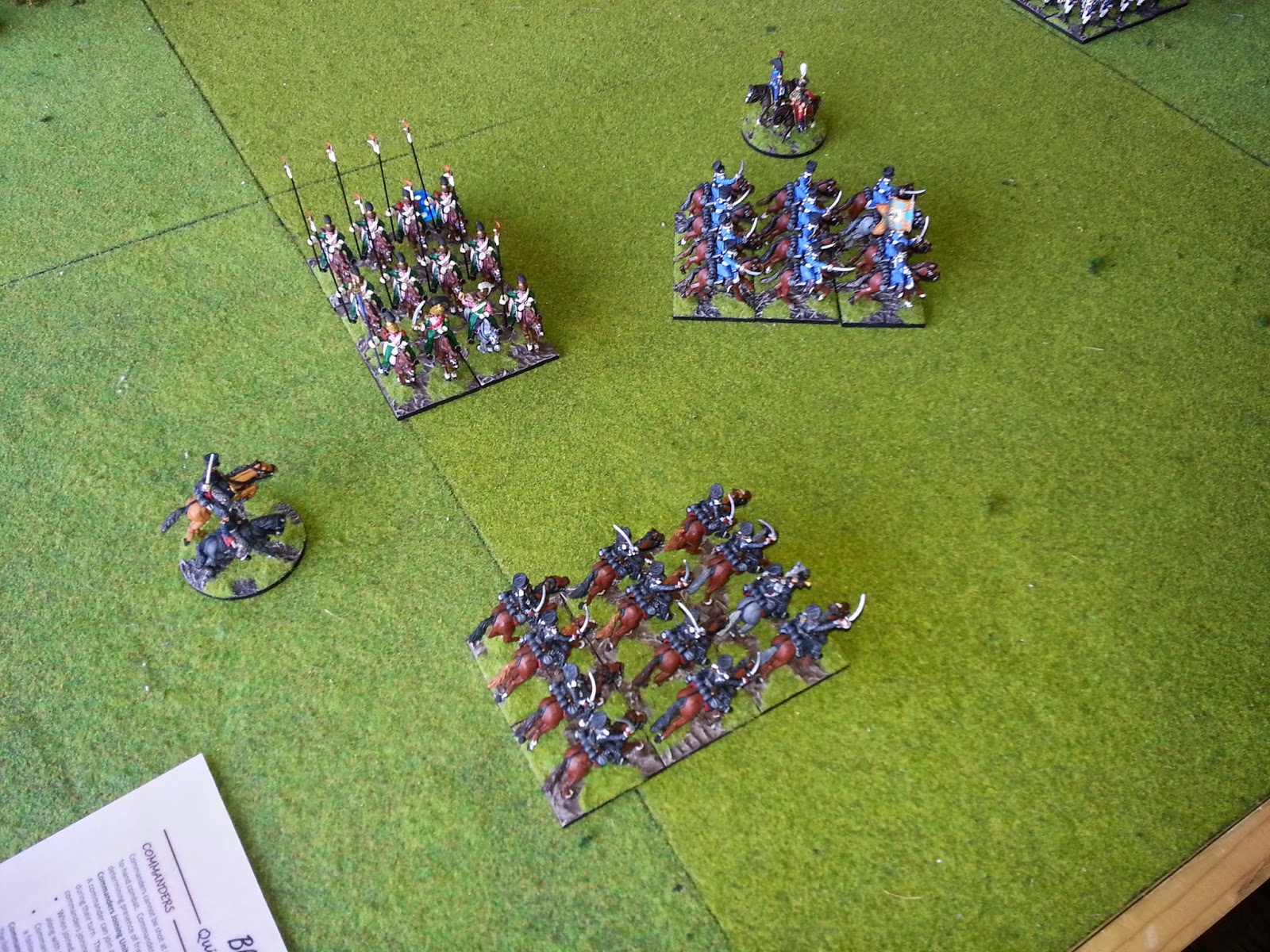 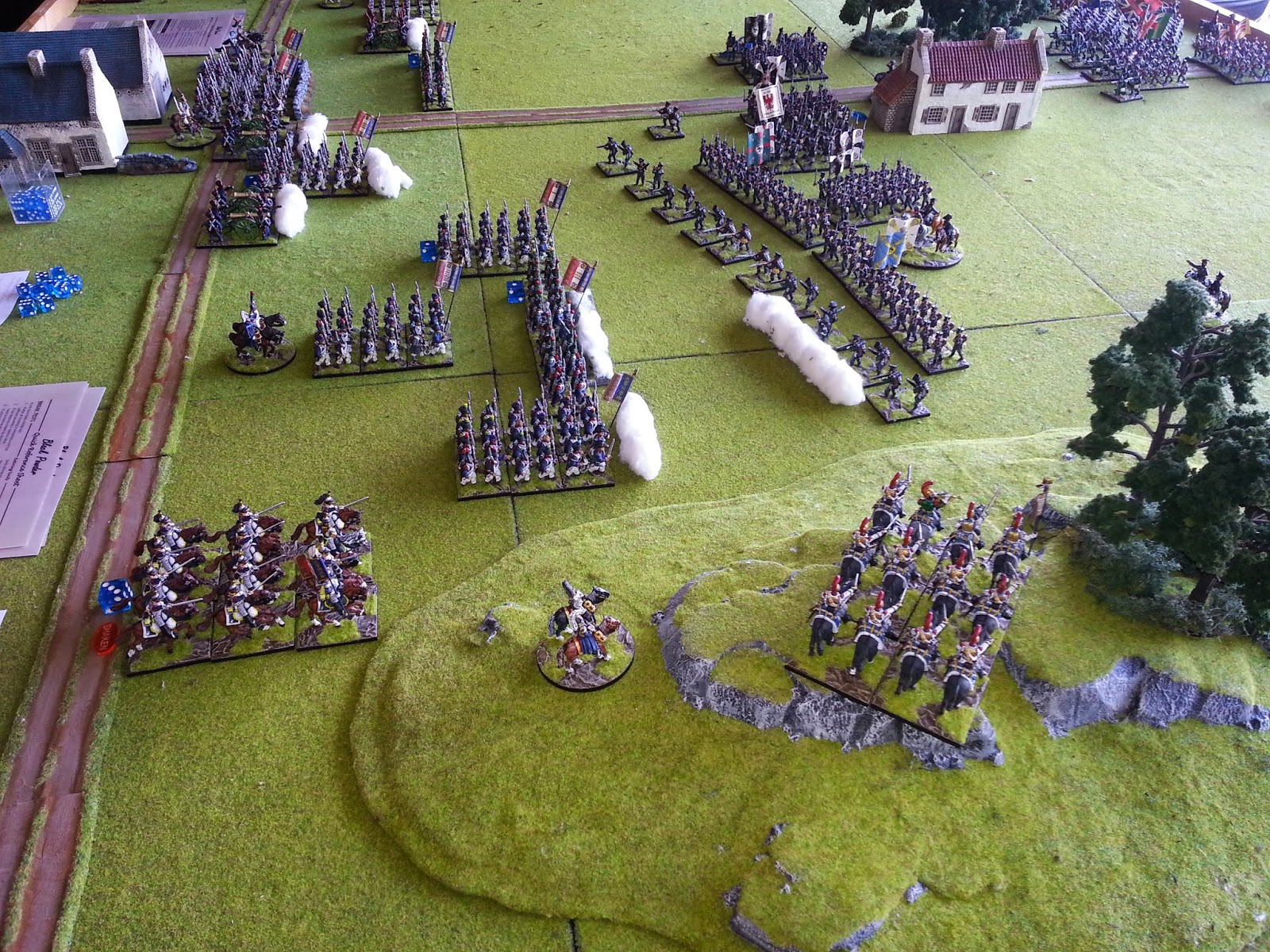 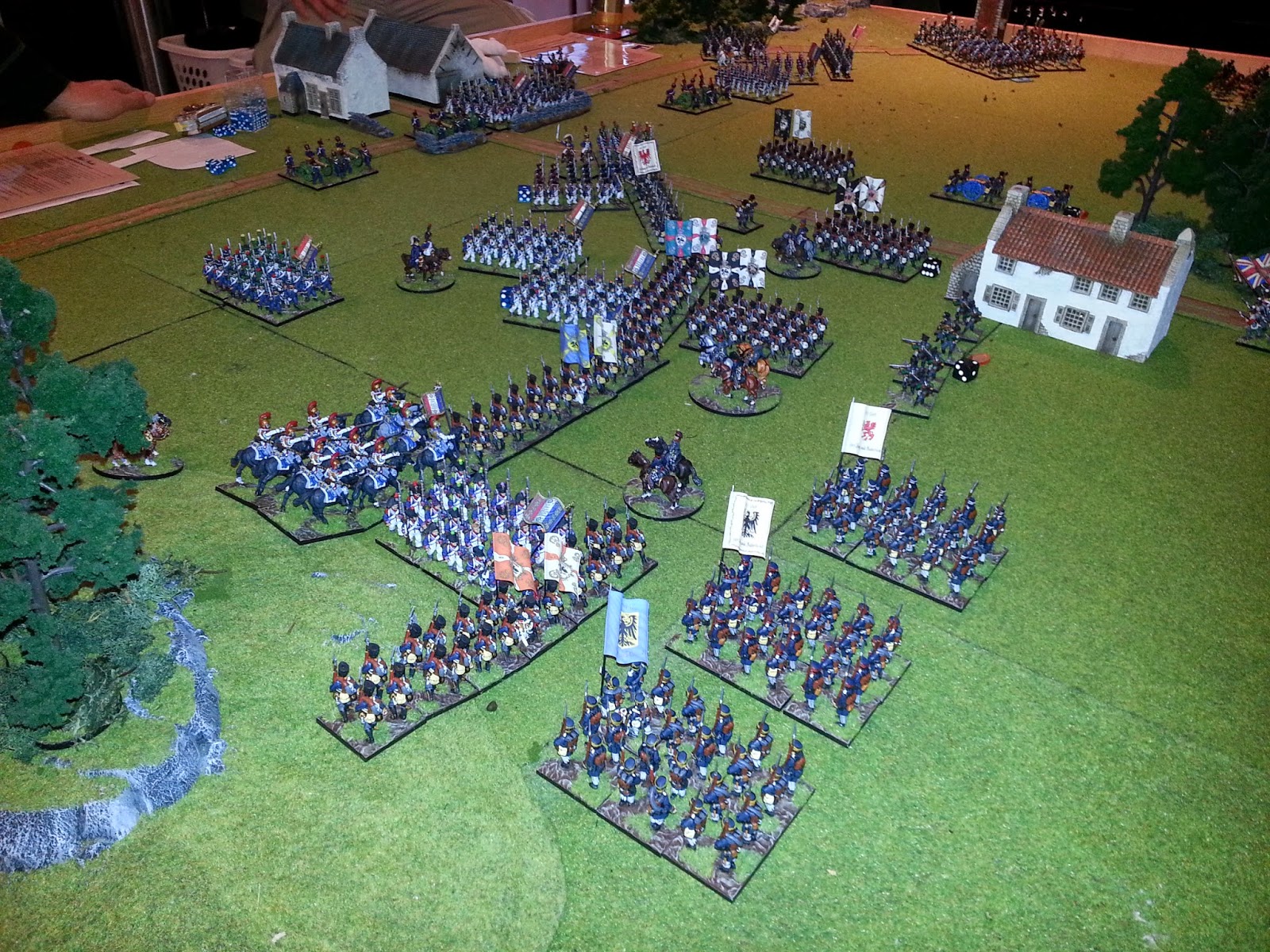 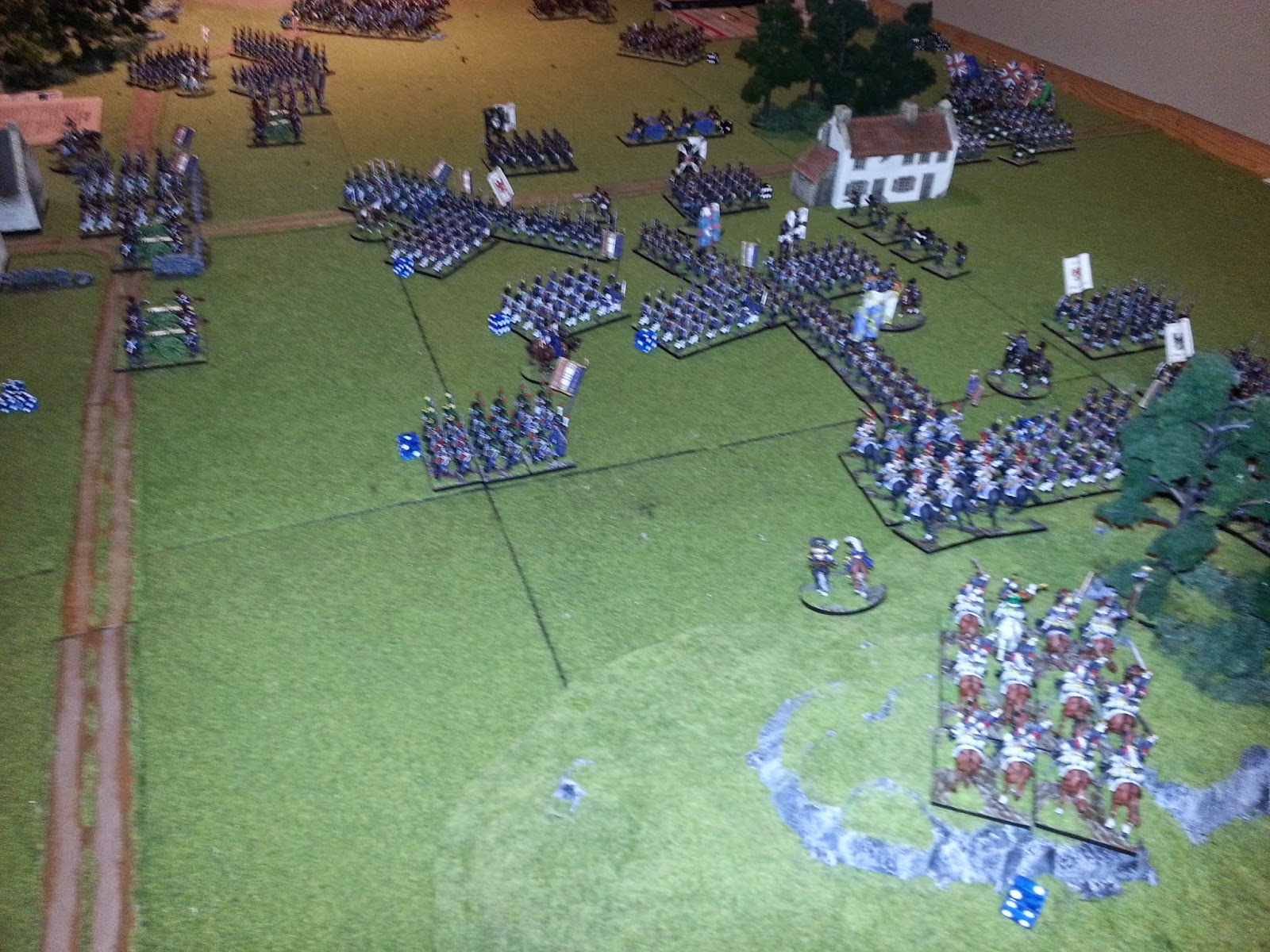 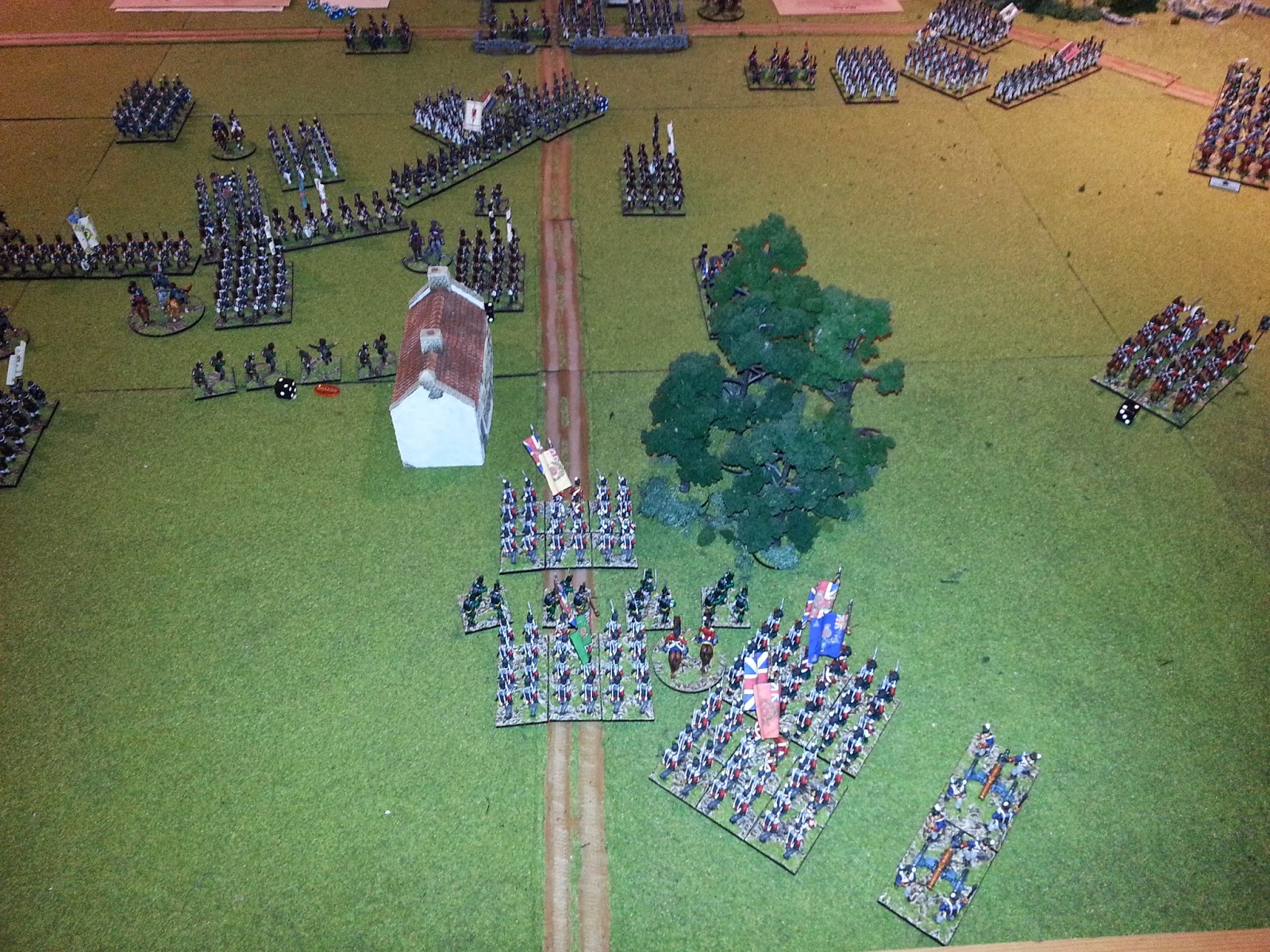 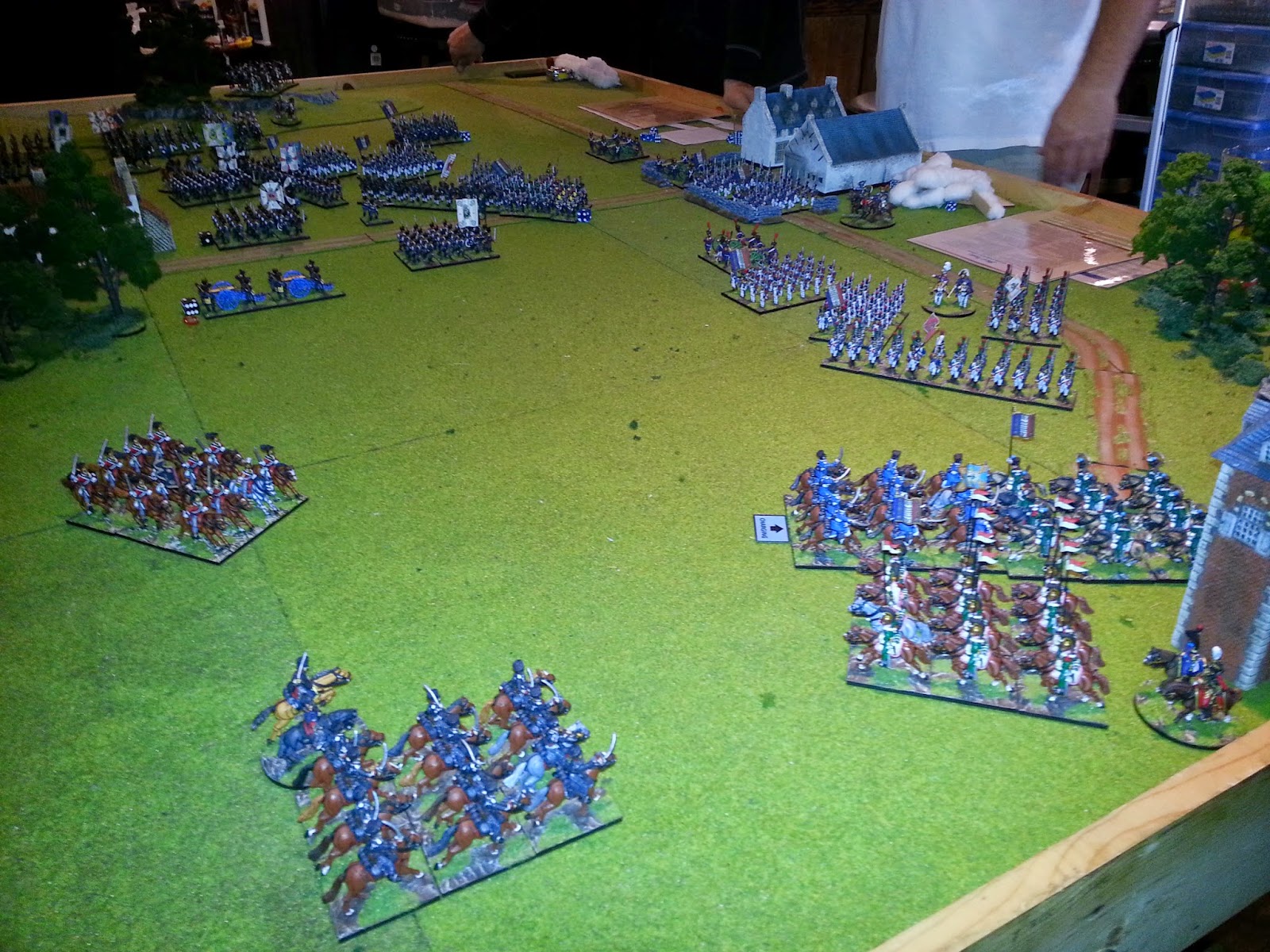 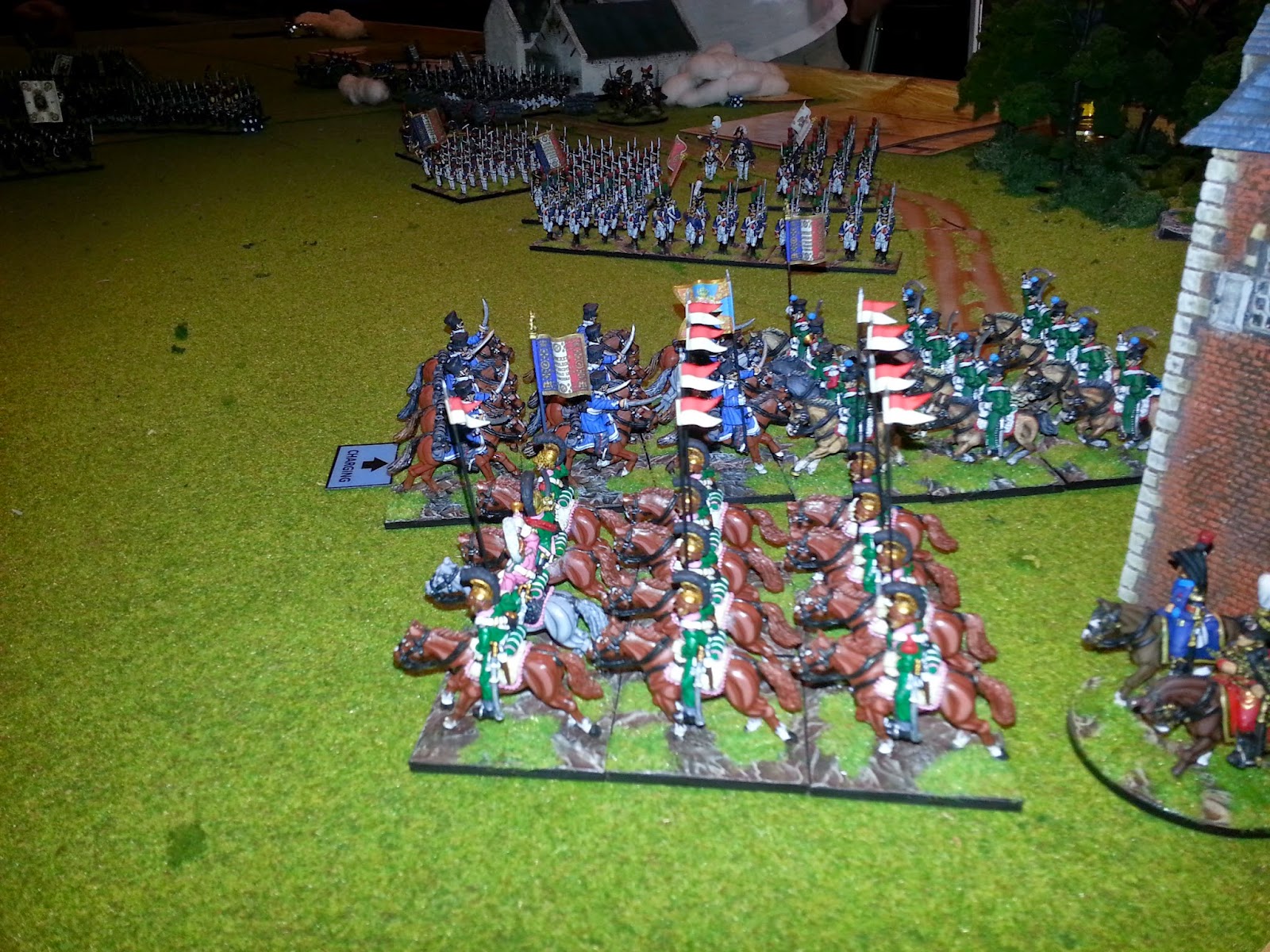 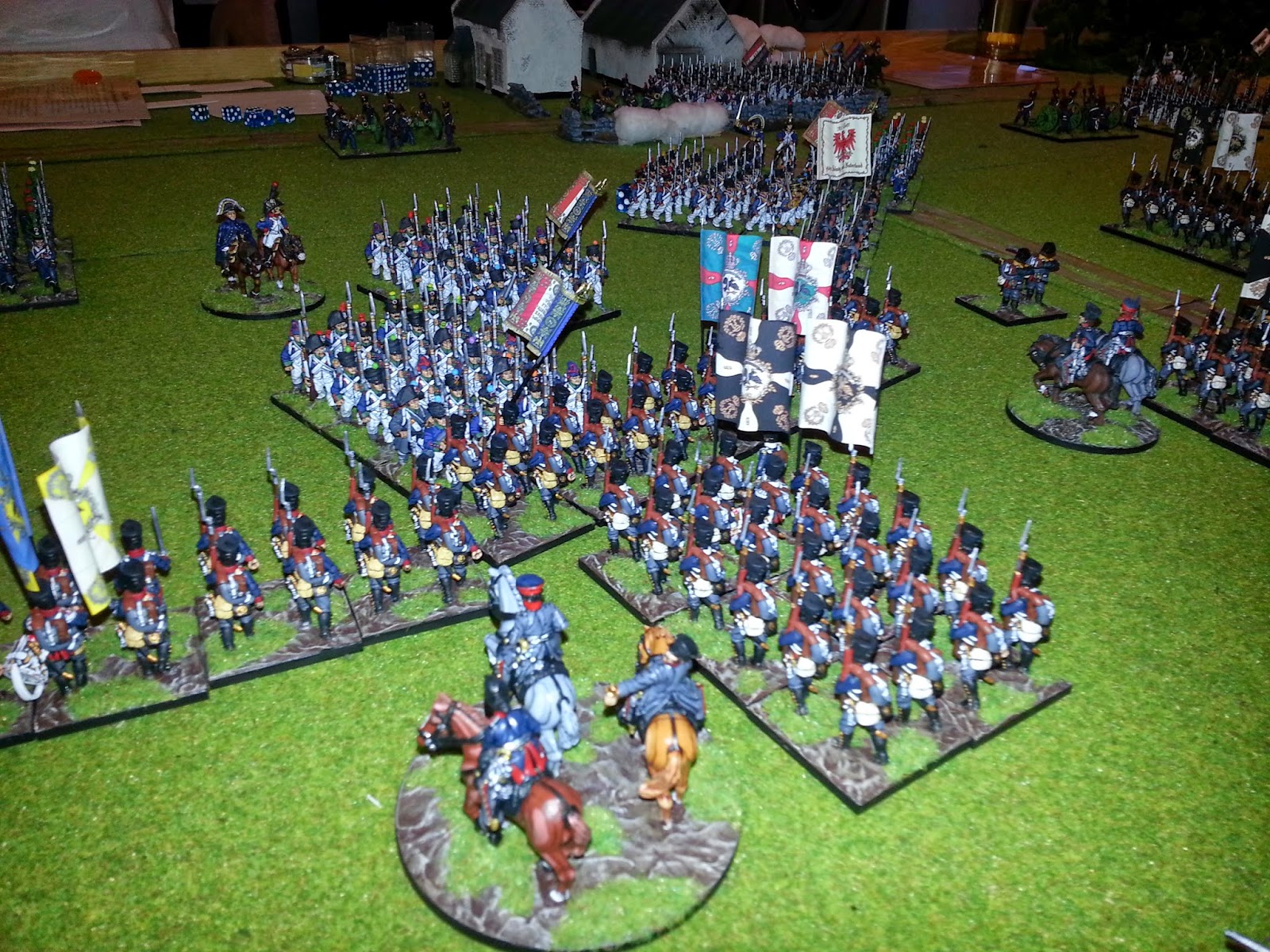 For about the last year or so I've been slowly collecting Perry Miniatures ACW figures.  I have to say that Perry Miniatures are on a roll - they've released some outstanding plastic sets covering some key periods, but the thing I like the most about them is how they fill out their ranges with extras.  For example, their carts and wagons from their AWI, ACW, and other periods are outstanding.  For ACW, I have their supply wagon, field forge, ambulance, casualties and camp sets - all of which will add some outstanding details to the battlefield in much the same way I've used their stuff for my French & Indian War collection (wagons and civilians).

To "get my dander up" around ACW, I've been watching movies (Gettysburg, Gods and Generals and Glory) and reading several books.  In addition to checking out some pictures of others playing ACW miniatures games, I've also been inspired by the art of Don Troiani - who has some exceptional works under his belt.  A buddy of mine lent me his book and I've been drooling over the pictures ever since ... you can see a couple of examples below.  You can pickup his book here (available on Amazon).

As I now have my Bolt Action collection nicely filled out (and with more to do there), I looked at my recent efforts and they've been heavily oriented towards skirmish level wargames.  I have a large Napoleonic collection I use with the Black Powder rules (excellent, a game coming up this weekend) - but I want another largish period I can tackle.  So, I landed on using  Black Powder for my ACW stuff (originally I was looking at Brother Against Brother - another skirmish level investment).  The infantry units will be made up of 30 figures each and will represent a regiment, cavalry will be 16 figures mounted, or 12 dismounted with 4 groups of horse holders, and artillery will be a single gun with limbered and unlimbered options.  I've been assembling units - as you can see below ...


My current plan is to build three brigades for each side.  For the Confederates, I'll build Picket's division at Gettysburg - all 15 infantry regiments/units (three brigades of five infantry units).  I'll also add two guns to that division.  For the Union, I'll build out the Irish brigade, and other units of interest from the battle of Gettysburg, some guns, and some cavalry.  The idea being that I would have enough to do several small scenarios from the battle of Gettysburg (and of course others).  I'd like to run "Picket's Charge" when I get everything finished up ... the sight of three full brigades or 15 units of 30 figures marching across the table would be awesome (at least in my mind) ... I also have some ideas on how that scenario can be built out in Black Powder while giving both sides that opportunity to "win" ...

So, more to come on this front.  I have a Black Powder Napoleonic's game coming up on Sunday and I'm looking forward to that as I haven't dusted off my collection for some time.  I'll be posting up pictures and a battle report following that game.
Posted by Jay White at 9:55 PM 10 comments:

I was given the chance not too long ago to take a closer look at the Over Mountain Men range that is produced by King's Mountain Miniatures.  This post ties into my older post about comparative miniature size for the various 28mm French & Indian War ranges available today.  You can read that post here.


I think these are very nice miniatures and are worth a look for anyone considering building forces for wars between F&I and AWI.


I should also point out that King's Mountain Miniatures also does Highlanders for the American War of Independence (AWI).  They would not be appropriate for French & Indian War but they are very nice miniatures!  In fact, that is a pet peeve of mine in that I see many use the Perry Miniatures AWI Highlanders for French & Indian War ... and the uniform and look is very different between the two periods - even though they are not too far apart "date-wise" - the uniforms underwent some significant changes in that short time.


I don't really have anything negative to say.  The range is currently limited to AWI Highlanders and the Over Mountain Men - so for the periods there are some units you'll have to look to other manufacturers to fill out (for example, regulars, cavalry, artillery, etc.).  The many head options available allow the base models a lot of versatility/re-usability within each range.

So if you are looking to mix things up with your French & Indian War collection or expand your AWI collection I would certainly take a look at what King's Mountain Miniatures has available.

Updated:  A note from Bill at King's Mountain Miniatures

"Thanks for the review. I'll be happy to answer any questions that collectors my have at   kingsmtminis@aol.com.  In regards to the available base poses, right now there are 16 different bodies that represent frontier type of militia.  There are 31 different Highlander poses. That's 47  unique poses in less that 2 years.

Hopefully by May, there will be 32 new poses released, representing Continental soldiers in the AWI. The separate heads will allow almost any unit to be made. 8 of the poses will represent dismounted dragoons fighting on foot.

Thanks again for the kind review.

Email ThisBlogThis!Share to TwitterShare to FacebookShare to Pinterest
Labels: French and Indian War, Muskets and Tomahawks

I've not perished in some unfortunate accident ... my work has just gotten the better of me this past two months.  That being said, the smoke is clearing and hope springs eternal!  I made little bits of progress on several fronts over the past little bit, but hoping to get serious progress made soon.

I'll very shortly be posting a review of King's Mountain Miniatures --- who make very lovely 28mm miniatures for AWI - and have many that work very well for F&I (see their Over Mountain Men range).  I'll have some comparison photos and such ... but worth a look in the mean time.

So more to come ... I'm very much looking forward to KublaCon --- which is coming up this memorial day weekend ... I'm thinking about doing a GameTime "at the con" episode.
Posted by Jay White at 11:07 AM 4 comments: