Hello everyone and a belated Happy Thanksgiving to my friends in the US.  You may have been wondering "what the hell happened to this guy?"  The answer is easy - I've been basing and painting Napoleonics (and doing the regular family/work stuff).

Good news ... lots of pictures and a few different things covered below ...

The group and myself are working hard towards a January play test of my Waterloo scenario.  As you can imagine that requires a LOT of 28mm miniatures (around 4,000).  This involved expanding my Napoleonic French army significantly.

The picture below is from a few weeks ago ... getting most of the stuff on bases but still a lot missing that has since been added (cleaned up the garage for Thanksgiving so it isn't all out and lined up at the moment) ...

As you can see a lot is in progress ... but an enormous amount of progress has been made ... hence why I've not been blogging.  Most of the last week I've spent painting artillery.  I've painted 22 guns/limbers just in the last week!  I was going to do a post about "Gunvember" to track my progress but honestly I just got into the grove and didn't want to mess it up so just kept on painting.  Very happy with the progress.  I have another 9 guns and 2 limbers to paint and hope to finish that over the next week or so.  You can see some of the completed units below ...


Work in progress pictures below for various units ... 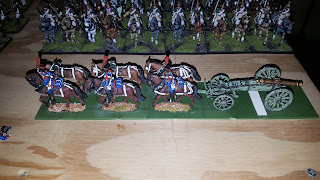 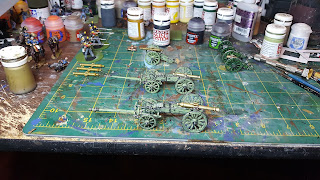 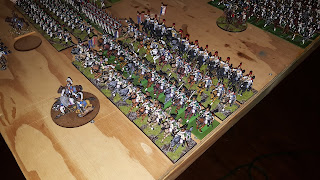 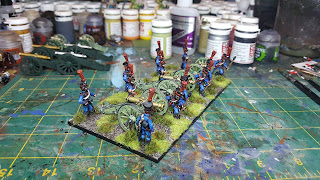 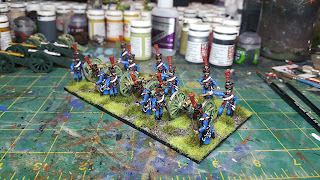 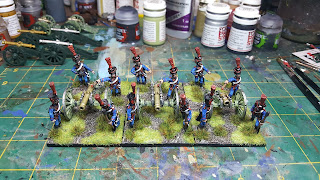 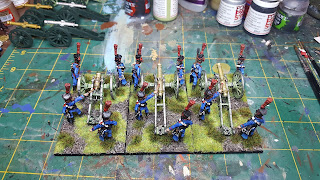 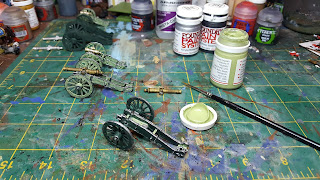 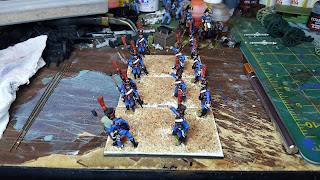 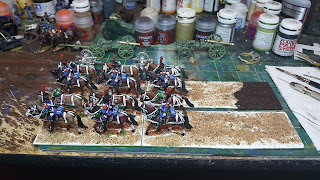 When basing I use wallboard joint compound (pre-mixed plaster) to fill the base (blends the edges of the figure bases) then a little white glue and sand/rocks to prepare the base.  A base coat of GW Rhinox Hide is used, then a drybrush of GW Steel Legion Drab, and finally a drybrush of GW Screaming Skull.  I then add static grass and tufts. 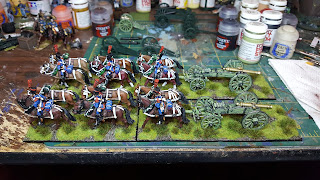 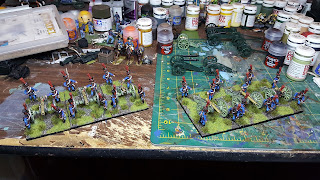 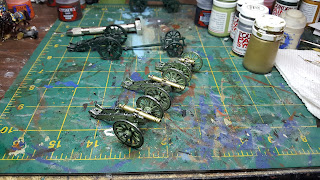 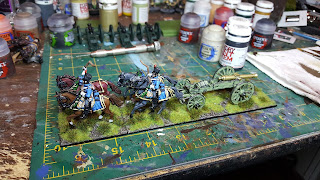 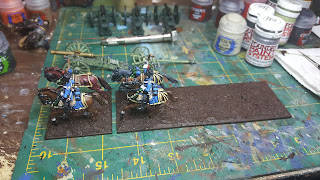 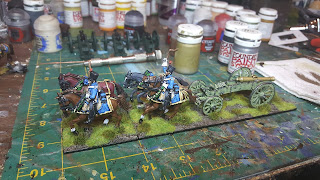 So tons of progress.  I've managed to get all the new infantry units based and most of the flags done (a few left to do).  I'm confident of the January play test date.

David is working away on the mats and my massive Hovels order has arrived (note:  I already have the Hovels La Haye Saint set completed) - Hougoumont and Papelotte.  I pulled everything out and took some pictures so I can remember where everything goes.  I really happy with how this all came out.

During the break I also got to play a new game with my buddy Dan Kerrick called W1815.  This is a really quick and fun Waterloo "pub battles" style game that has been out of print for a long time and is hard to find.  I snapped a few pictures below.  Very easy to learn and play.  Each game took us about 20-30 minutes. 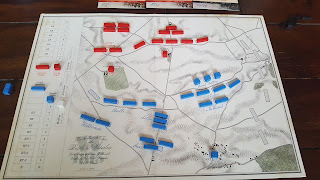 The positions are fixed and each corps has specific enemy corps they fight.  You roll a D6 after deciding who to attack with and consult the corps card for the result of the action.  The Anglo-Allied player can bring in Prussian units on the French flank (indeed, perhaps the best strategy for the AA player.  Each side suffers casualties (FC or AC) and morale loses (FM or AM) until they fail a morale test (and lose the game).  Provisions are in place for the capture and recapture of Hougoumont, La Haye Sainte, and Papelotte. 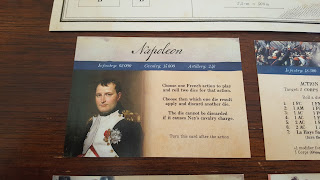 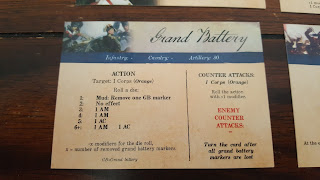 Lastly, if you have not seen the latest releases from Crescent Root Studio, they have some great hybrid (MDF combined with 3D printing) terrain sets they recently released.  Some of the stuff is very period agnostic ... some more narrowly applicable (e.g. oil cans) but overall very nice and I recommend them. 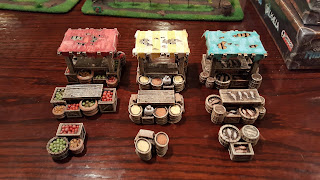 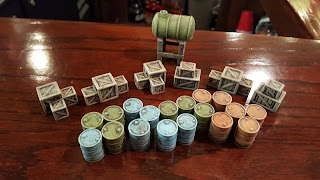 I'll stop there for now.  As you can see while I have not been blogging I have been busy with wargaming stuff!  I can't wait to get Waterloo on the table for the play test ... it is going to be grand!
Posted by Jay White at 3:48 PM 22 comments: