Well ... the holidays are over, I'm back to work, and have a good idea of what I think will happen through 2017 for my wargames.  In fact, there are already several exciting things already in progress! 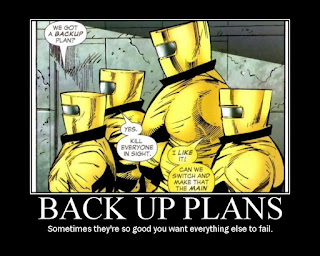 Perhaps the largest priority this year is **TO PLAY MORE GAMES!**  I have a large collection of miniatures covering several periods in history ... I need to get them out of their boxes more often.  This means (covering games not discussed in this post) playing ...

This is going to focus on wrapping up the three Gettysburg scenarios I have wanted to do from the beginning:  Pickett's Charge, McPherson's Ridge, and Little Round Top.  I have high confidence on this project as we've just run our first game for Pickett's Charge and I just paid my "fur mat people" for the McPherson's Ridge mat which I'm expecting at some point in February.


Little round top will be a little later.  The good news is that other than a couple of units, all the miniatures needed for all three scenarios are done.  So, specifically what am I doing for all this?

I plan to run both Pickett's Charge and McPherson's Ridge at the May convention (KublaCon) which involves completing the majority of the items listed above.  I have high confidence in completing these items this year as another primary objective for me is to complete/finalize my ACW collection.

My Napoleonic armies are in good shape, but I do have some work to do on my Austrians.  I really want to fancy up my Napoleonic terrain which is rather old at this point.  Most all the buildings we use in our games are some of the first terrain items I did for my wargaming collection.

I've made enormous progress on my modern collection this past year.  This year sees me round it out and finish off the last items I have for it.

This is a game I've always wanted to play but originally I was busy with other things and didn't fancy the miniatures at all.  The new re-release of the game has inspired my group to get some teams on the pitch!  I have a full Orc team getting commissioned right now and I'll be following that up quickly with a Chaos Dwarf team.  John Lantz is painting his Dwarf team right now.  Dan Kerrick has a Skaven team going off to be commissioned and Roy Scaife is sending out his Chaos team shortly.  Should be a lot of fun.

I'm really excited for this as it is a relatively easy and small project - which means it gets done relatively quickly!  For the custom BB pitch I've been inspired by several pictures I've seen on the interwebs ... specifically I want to do something along these lines ...


Last but certainly not least ... here is a "work in progress" pic of an Orc Blitzer that is just about done (more details being added).  The excellent Mark Brooks has been commissioned to paint my BB teams and he sent along these WIP pics ...


Lord of the Rings (Helm's Deep)

I've made great progress on Helm's Deep.  I'll be doing this in a few phases just so I get a break from casting and building.  I'm about 2/3rds complete with the Hornburg having made a little more progress since my last post ... but the holidays (parties, family gatherings, etc.) meant I had to clean up my project area so not much more has been done since before xmas. 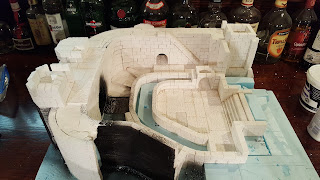 I got really aggressive and was going to try to unofficially run this at KublaCon in May ... but that just isn't realistic ... too many Uruk Hai need painting.  So, I'm going with the original plan here which is to run this at PacifiCon in September.  This is good as it let's me get a few other things done while the painting of miniatures moves along at a steady pace.  The miniatures for Rohan (foot + characters) and the Galadhrim (foot + characters) are already being painted right now by the talented Steve Dake.  There is about 50 figures each for Rohan and the elves.  I'm targeting 250 Uruk Hai ... which about 40-50 additional Uruk Hai covering characters and special units (berserkers, siege troops, etc.).

And some work in progress elves by the excellent Steve Dake ... 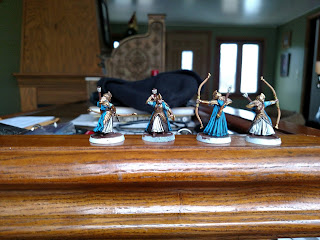 Again, high confidence here has good progress has already been made and all the work is lined up between my own stuff and commission work.

I have everything I need to do TCW - I just gotta do it!  Damn that Ivor Evans for making such a beautiful collection and inspiring me to get off my butt here.

I have everything I need to run the scene of the border raid (at the bridge, with Mr. Ness's guys coming from the US side and the RCMP from the Canadian side) from the Untouchables movie.  That will be my first objective as it minimizes the number of buildings needed.

One thing Ivor has done that has really engaged my brain into overdrive is use blue lights to play "night" games ... oooooooooooo!!!!  Check out his game here.  I've already source small battery powered LED lights ... rethinking my Pegasus Bridge game and others (including modern night games) using the blue light approach with LED lights for "lamps" and I plan to use tea lights in buildings (with plain white paper wrapped around them to diffuse the light).  Exciting possibilities here ... thanks IVOR!  A couple of pictures from Ivor's excellent blog below --- I recommend checking it out.

I've not forgotten about my WW2 stuff!  I'm going to put this into the later part of the year but I'd like to finish up some long standing projects.

So ... there are my plans ... of course I reserve the right to recognize and vigorously pursue every single squirrel that may come into my line of sight :-)  Thanks for tuning in ... it will be a fun ride through 2017! 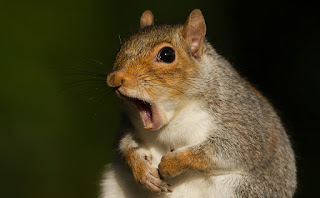 With the successful play test of the Pickett's Charge game under my belt I look to fill out the two additional scenarios that I wanted to do for the Battle of Gettysburg.  I'm busy finishing off the odds and ends for Pickett's Charge, which I will be running at DundraCon next month, but I did have time to put together my scenario for McPherson's Ridge.


I've contacted the same couple that did such a great job on the teddy bear fur mat for the Pickett's Charge game to have them also make this mat.  My plan to is run both McPherson's Ridge and Pickett's Charge at KublaCon in May.

Anyways ... there isn't a hole lot of work necessary for me to finish the terrain and miniatures for this scenario.  Essentially I'm currently short a single Union cavalry unit and that is it.  For terrain I primarily need to base some apple/orange trees for the orchards and finish the Seminary College model (which is 1/2 painted at the moment).

Ok ... on to the scenario details.

This scenario starts with Buford's cavalry in position on McPherson's Ridge with the first Confederate units moving onto the board to close with a push the cavalry off of the ridge.  Reynold's 1st Corps is arriving very soon to reinforce the Union position.

The Confederate player will be required to push hard quickly to dislodge the cavalry units before Union reinforcements can both arrive and move into position.  The Union player will have to do their best to hold until help comes.

The intent is that throughout the game the Union cavalry will have to eventually withdraw back towards Seminary College, buying enough time for the Union player to get the Iron Brigade and other elements into a position to stop the Confederate advance (and maybe even push back if possible).

Lastly, as the Confederates push on beyond McPherson's Ridge, they look to assault and take Seminary Ridge while the Union attempts to form a defense of Seminary Ridge.

The scenario map is shown below along with the initial positions of Buford's cavalry, the general terrain layout, and the entry points for various formations from both sides.  As with any game this size the battlefield has been condensed and unit entry points adjusted (not horribly, but some) from the exact historical sense to make a playable 28mm scenario. 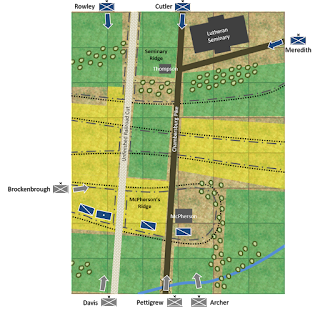 The only units on table at the start of the game are Buford's cavalry.  Other formations arrive from the designated entry points as follows:

Here is a picture of the actual start positions and table layout. 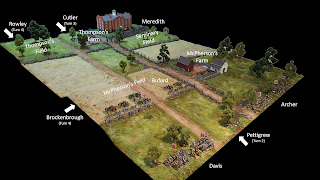 Orchards and light woods are marked on the map by trees and are either light woods or orchards that count as difficult terrain (no marching/double movement).  These provide cover for units contained within.

Movement up the slopes of McPherson's Ridge or Seminary Ridge count as difficult terrain (no marching/double movement) unless the unit moves full on a road (in which case it can move normally).  Note that this is only for going up the slope and does not apply once on top of the ridge.

The stream marked on the map is fordable and counts as difficult terrain (no marching/double movement).

All fields and the unfinished railroad cut count as open terrain.


If you are a fan of ACW and have a computer, I highly recommend the game "Ultimate General: Gettysburg" as it is both a fun game to play and visually stunning.  The graphics in that game have served as a source of inspiration for my ACW games.


I'm looking forward to getting this scenario play tested as well.
Posted by Jay White at 5:44 PM 14 comments: