Ok, pulled a late night here and finished up the 75mm AT gun position. This is the model that is available with the Warlord Pegasus Bridge set ... I sold most of my set in favour of the 4Ground set ... but kept the key parts that I know 4Ground was not going to produce.

I magnetized the gun itself so I can freely turn it and remove it if necessary (to fit the crew or remove it as destroyed).  I used a three colour grey for the cement (Foundry "Granite" series).  Finished off the base as I normally would with a little static grass and some highland tuffs from Army Painter.  I used Vallejo model colour paints to do the gun itself and the camo green.  Pictures below. 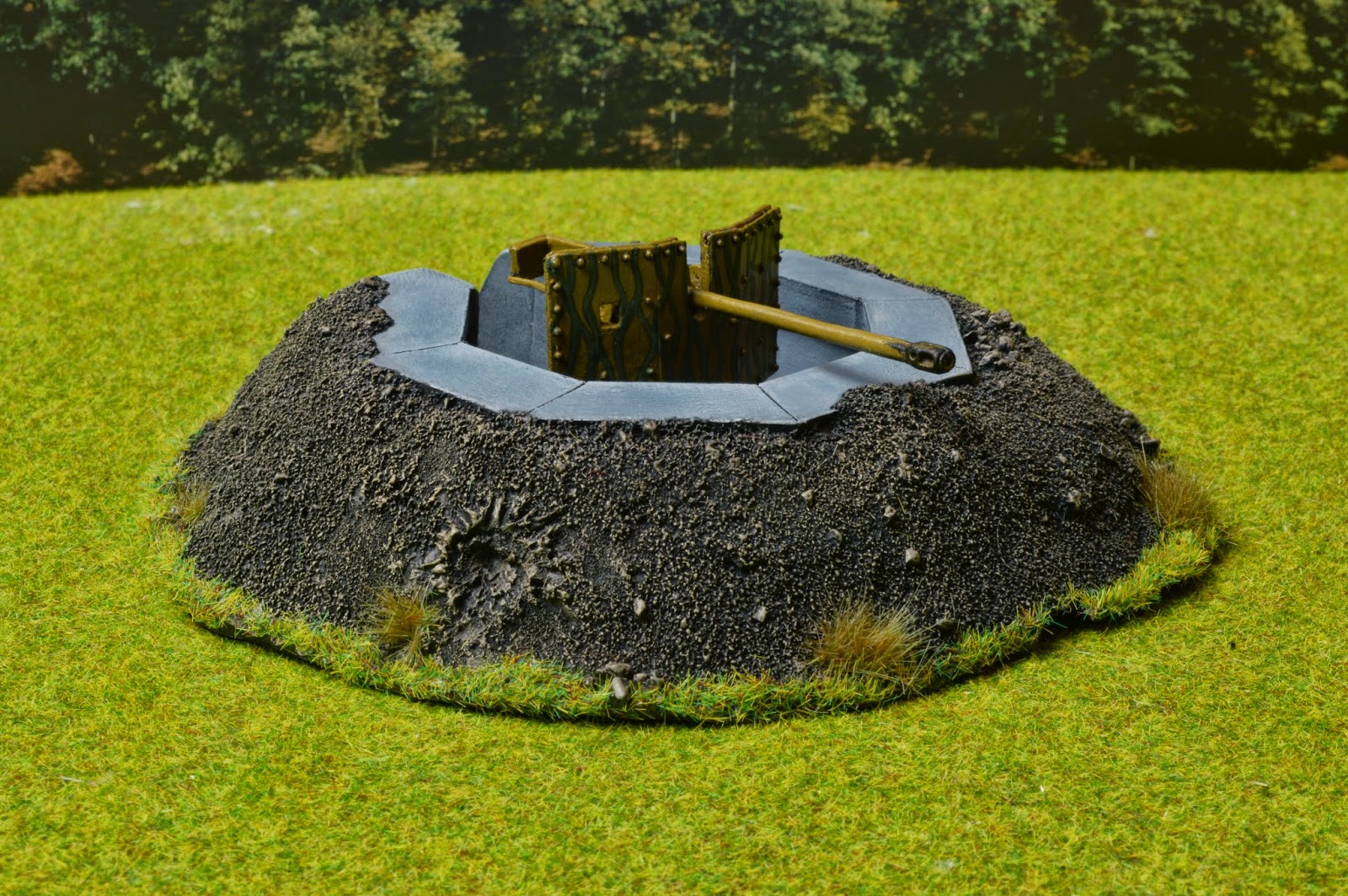 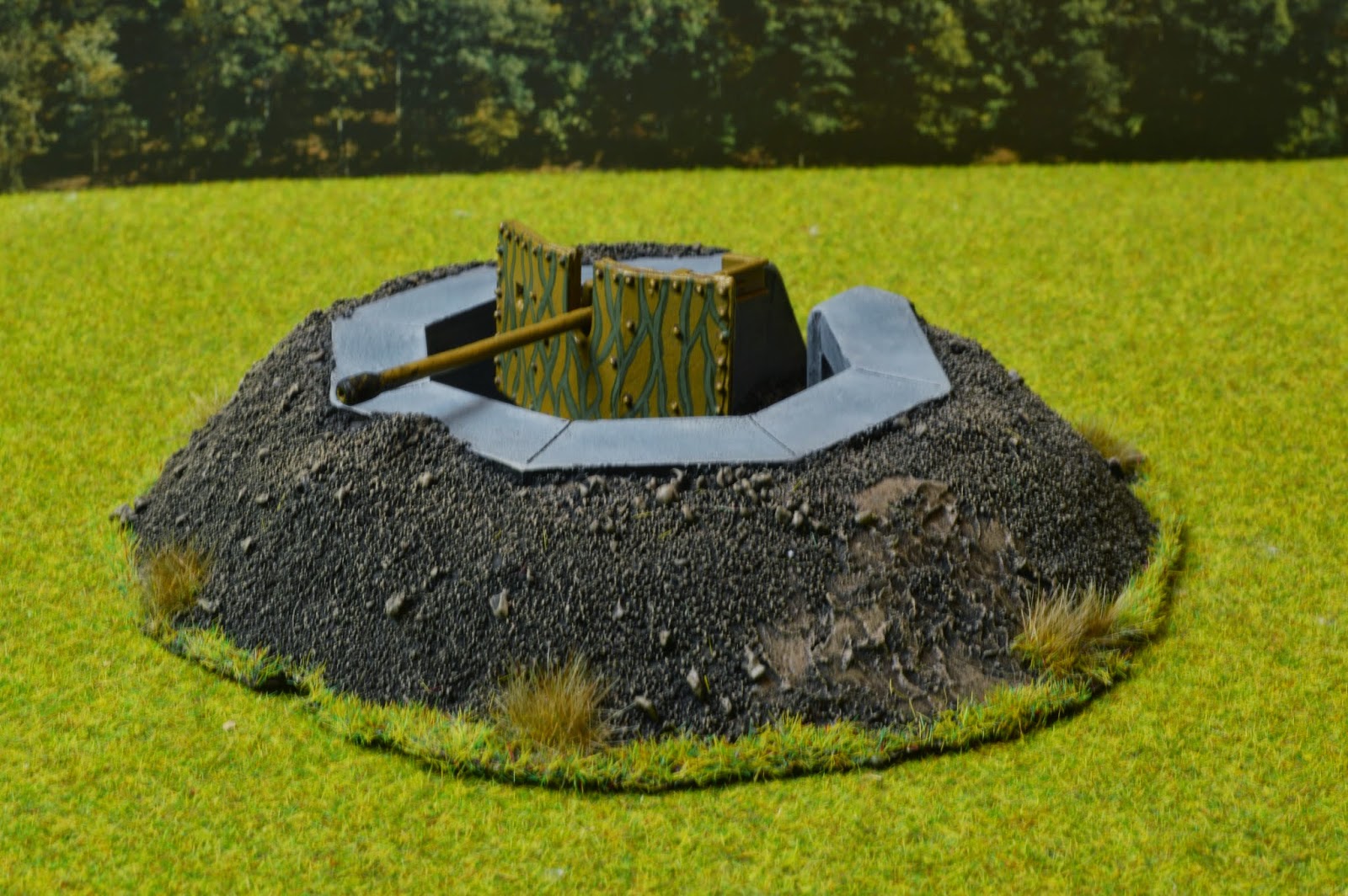 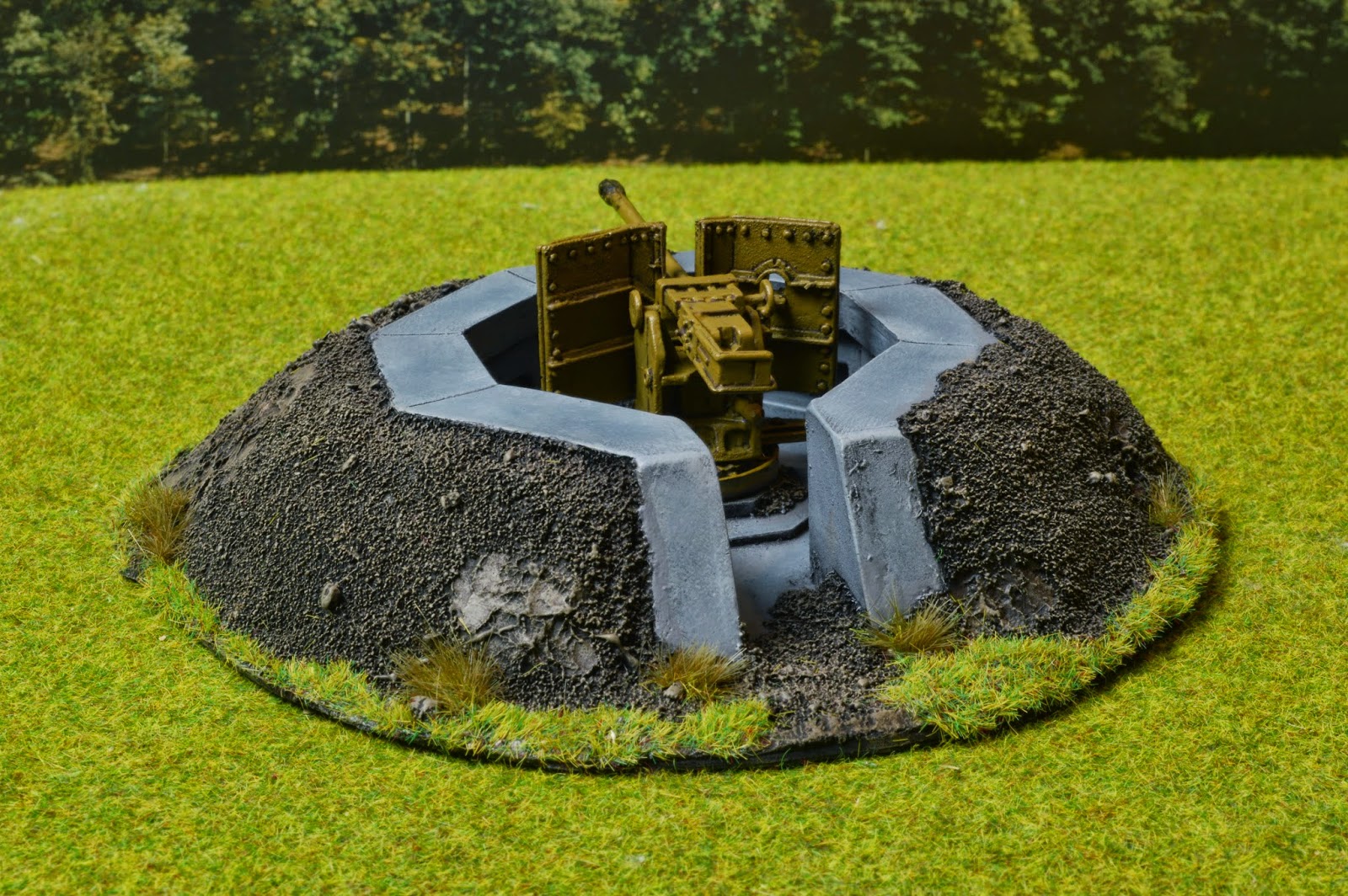 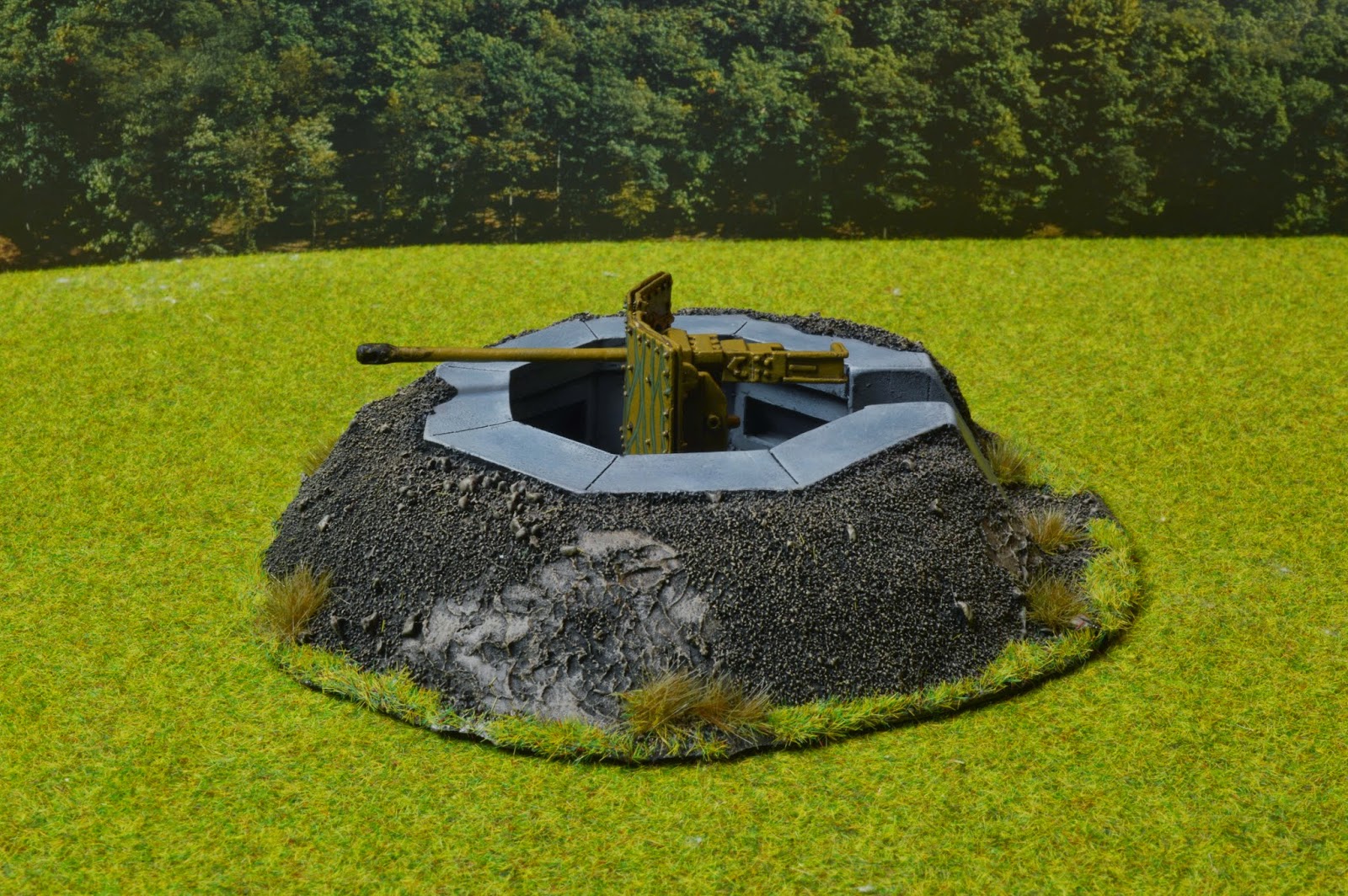 I've finish up my Horsa Glider that I'll use for my Pegasus Bridge Bolt Action scenario.  This model and it's base will serve as a jump off point for the British Airborne at the start of the game.  Although it may be difficult to see in the photos, I used plaster to put "scuff marks" into the base to show that it was "glided" over by the Horsa Glider.  The landing gear has been ripped off and left somewhere behind the glider so it is not visible on the model.

The model is the 1/72 Horsa Glider that is available from Warlord Games (made by Italeri).  Yes, it is technically more 20mm ... but it works and takes up just the right amount of space on the table.  I was tempted to get the glider from Grand Manner ... however it is both larger and more importantly much more expensive than the 1/72 version shown here ... and it works for what I want to use it for.

In addition to the glider, I was able to finish basing the telegraph poles that I'll be using for the scenario.  They are from 4Ground - I cut down the MDF base that comes with them and mounted them to washers to make them steadier on the game table.  Nuff said ... pictures below ... 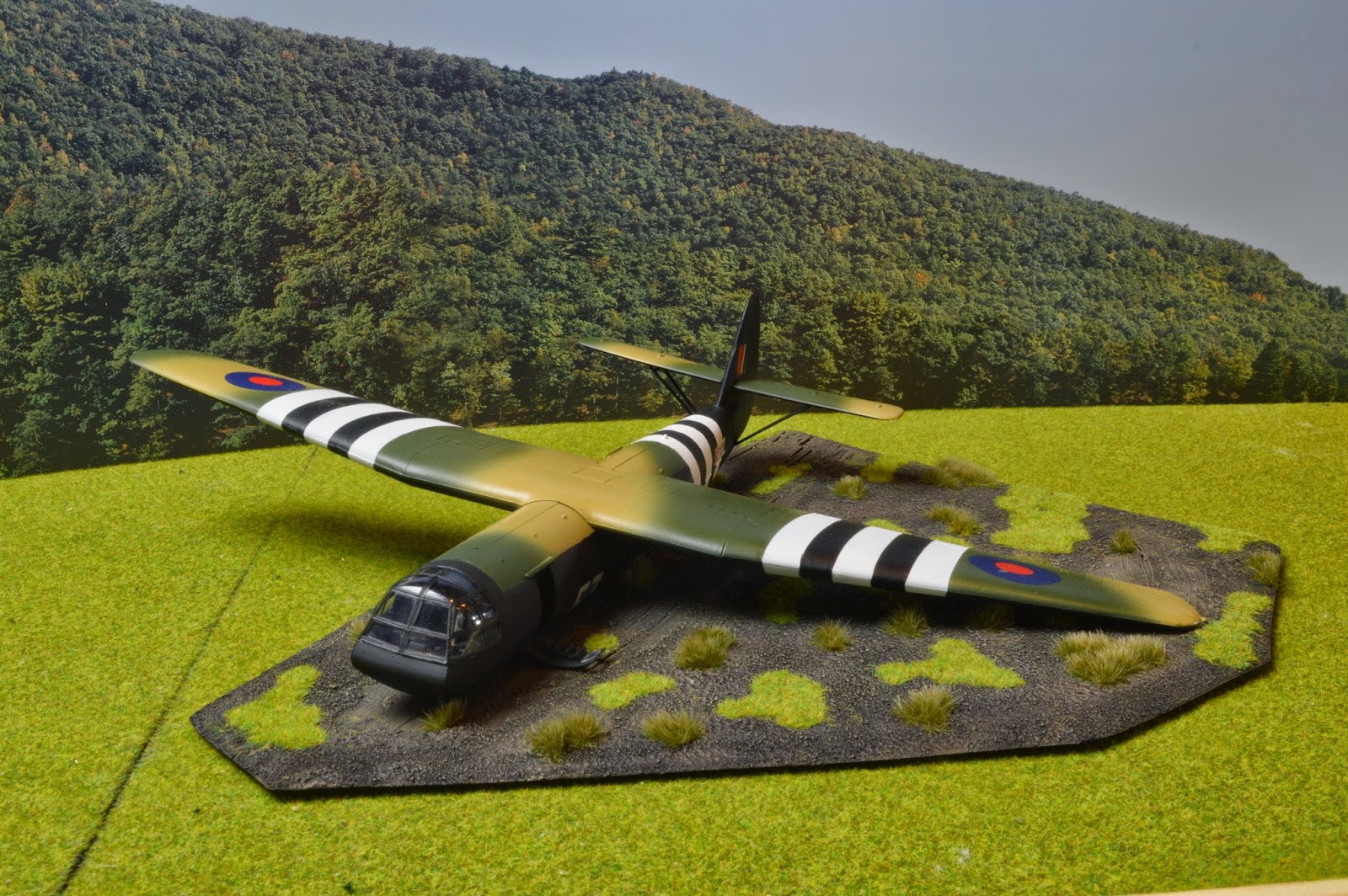 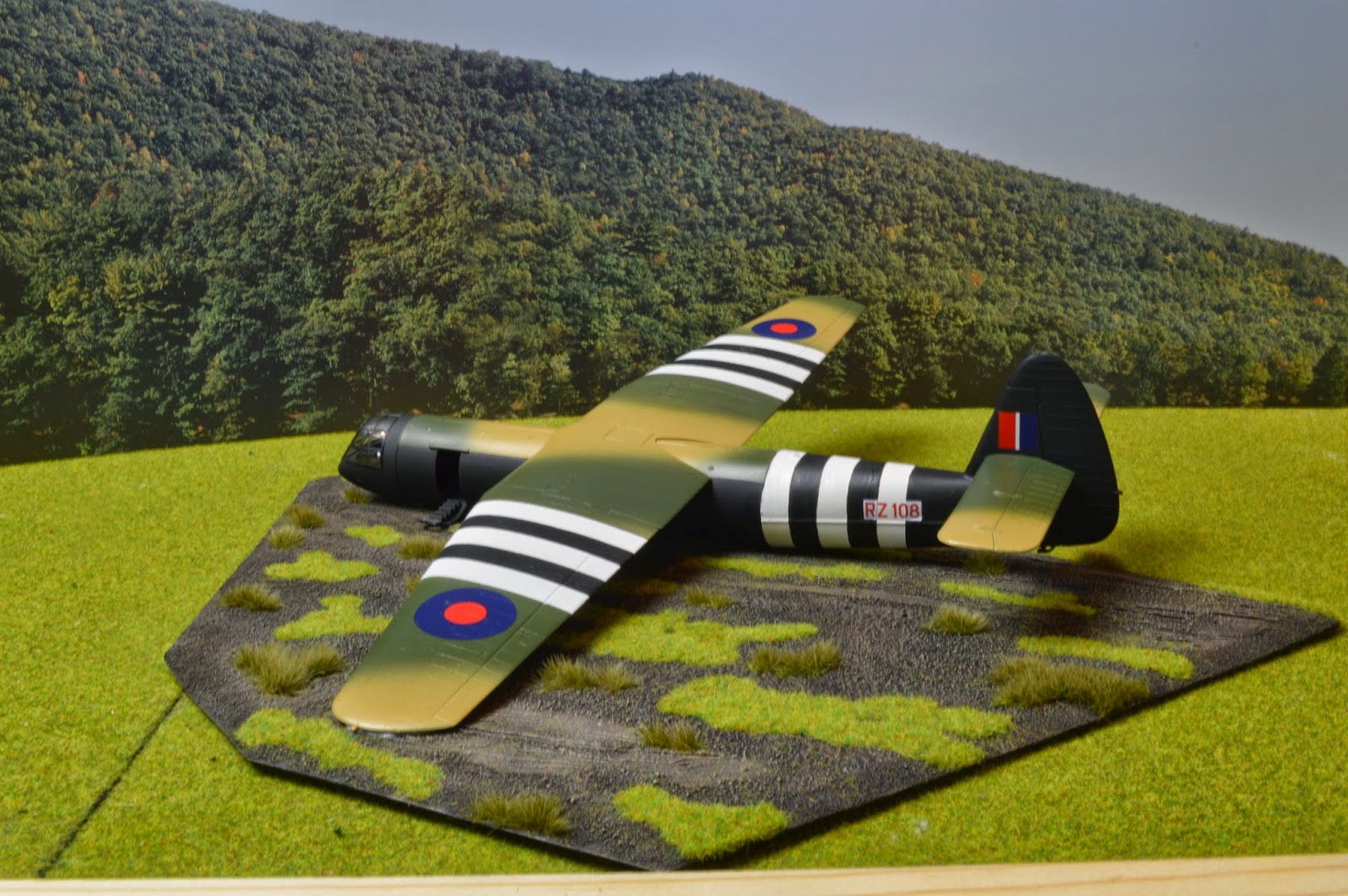 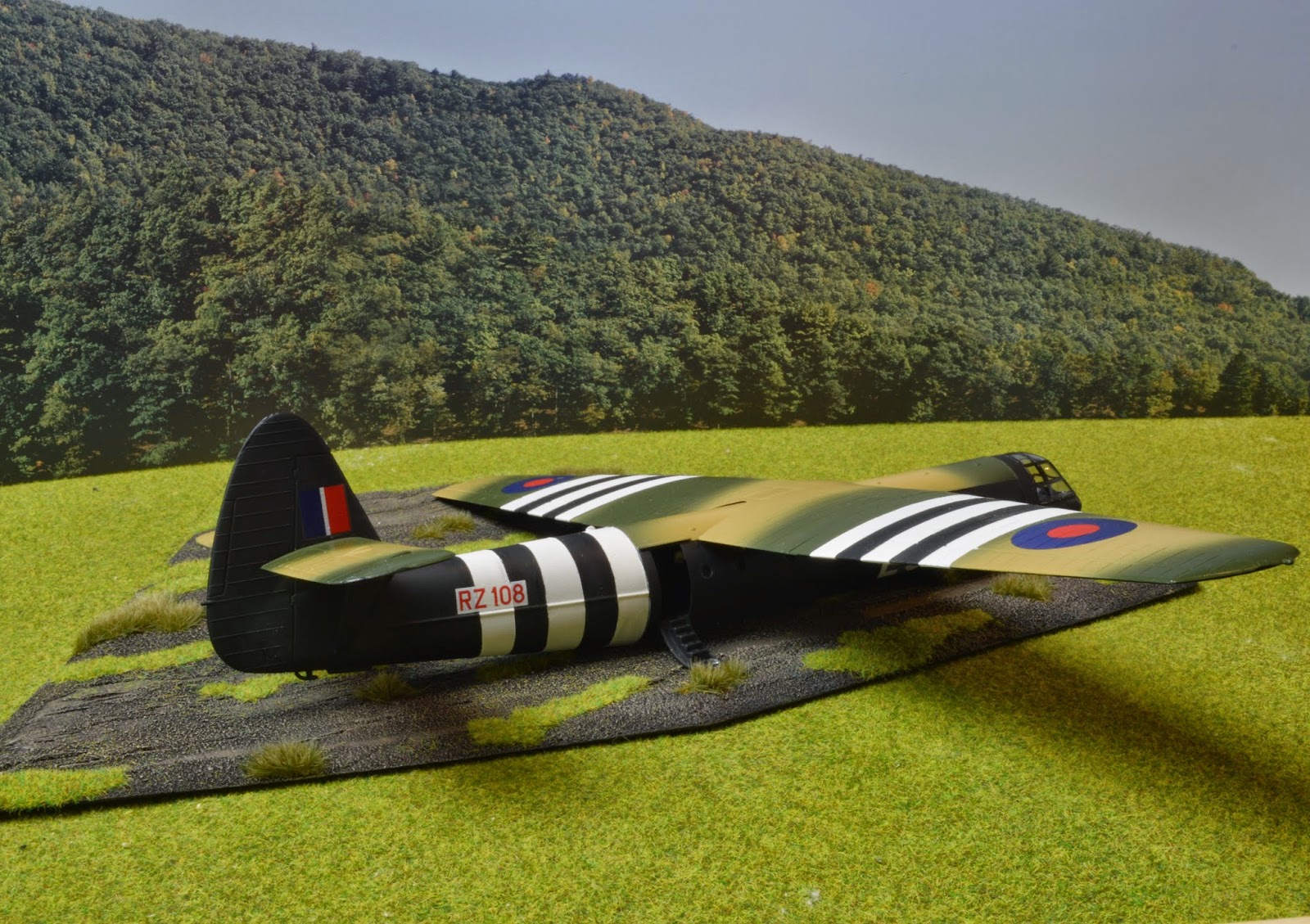 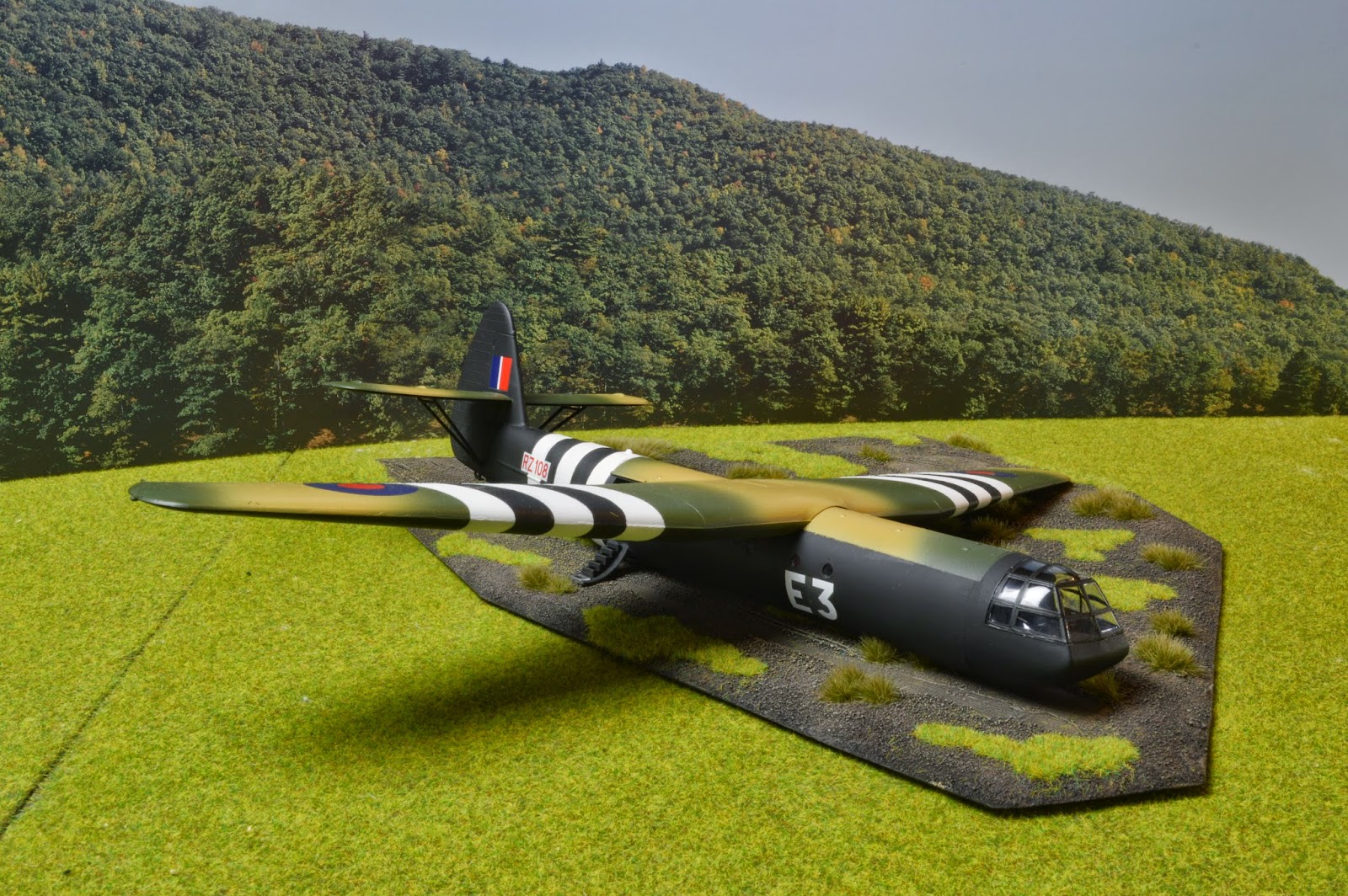 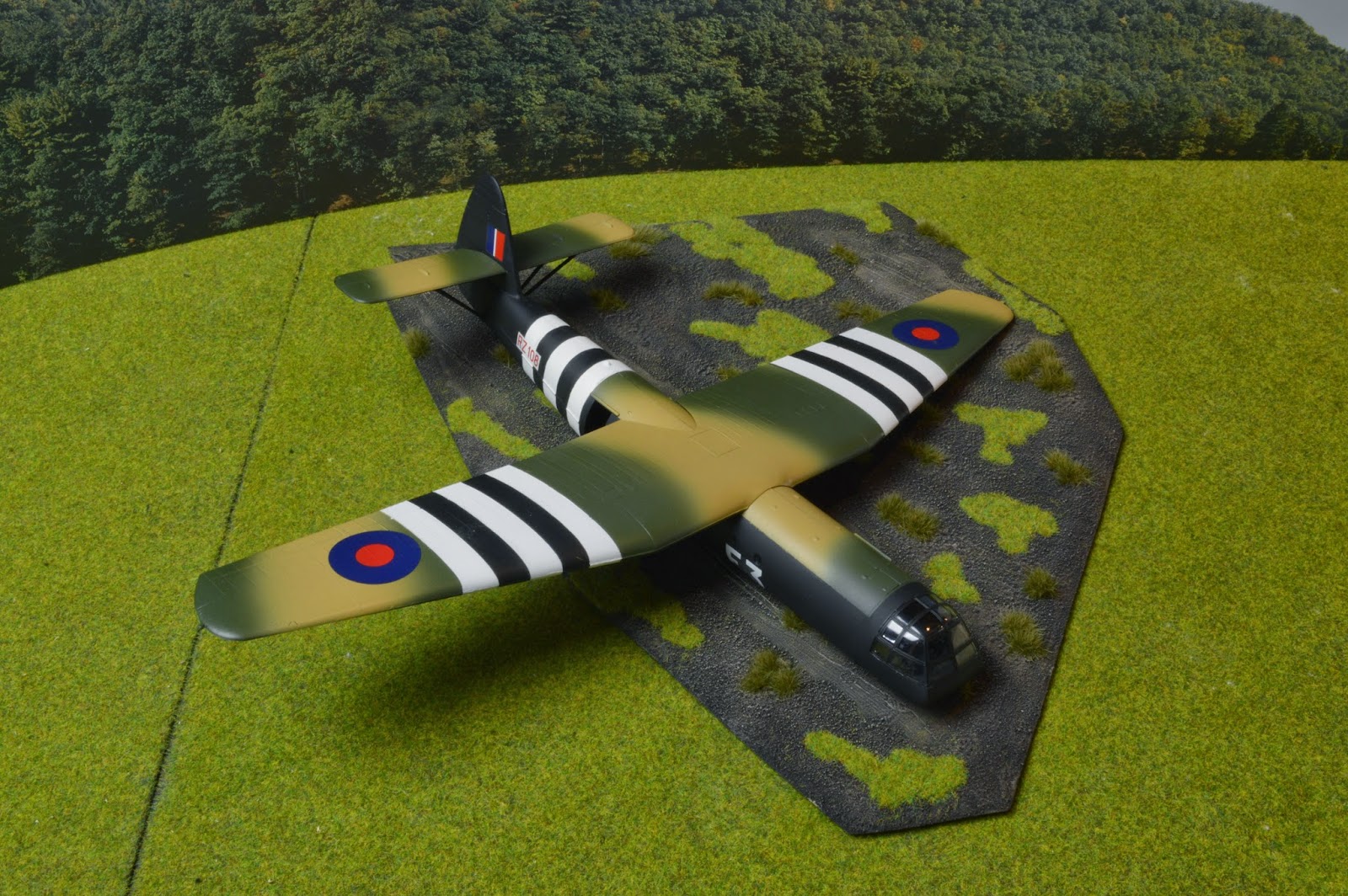 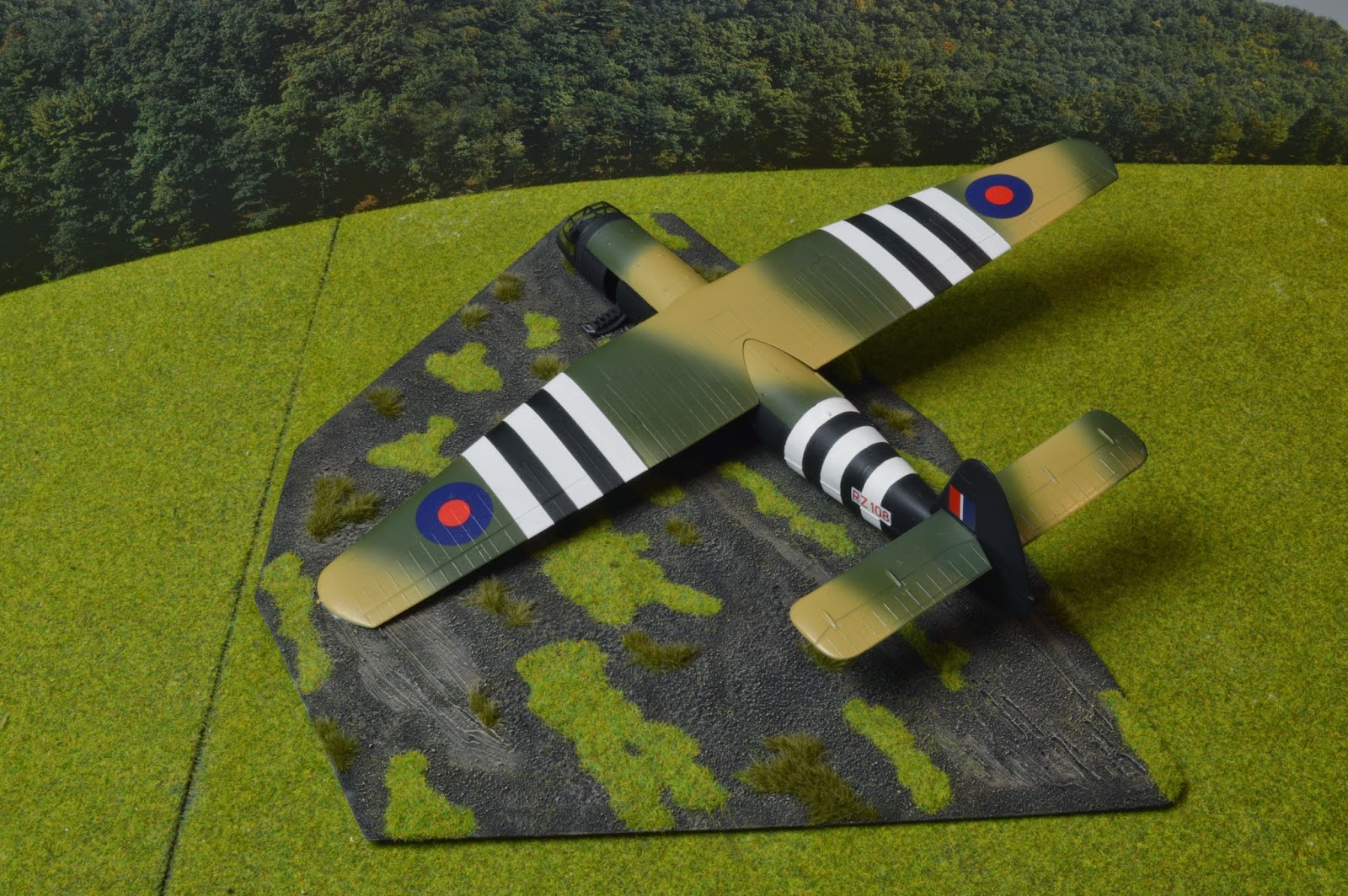 I'm just putting the finishing touches on the 50mm gun position ... and I have lots of British Airborne to finish basing ... so more to come.
Posted by Jay White at 4:22 PM 7 comments:

I've been making good progress on my Pegasus Bridge project that I'm working on for CelestiCon (this labour day weekend).  If you are in the SF Bay Area (or driving distance) - I hope to see you at CelesiCon - come play in my Pegasus Bridge game ...

My British Airborne army is painted --- and just in need of basing.  I'll be doing that late next week if all goes to plan.  The British Airborne forces I'll be using for the scenario is as follows (all classed as Veteran):


I'll post pictures of them once I finish the basing.  I'll also post up the full scenario breakdown (forces, reinforcements, objectives, turns, etc.) once I hash it all out.

I've built the Cafe and Bridge at this point ... so now it is on to the table details.  I'll be using individual trees (have them all - they need to be based), trenches from Ironclad Miniatures, a 1/72 Horsa Glider (1/2 assembled at the moment), the barracks and 50mm AT gun position from the Warlord Pegasus Bridge set, and a custom MDF board set for the river and base for the bridge.  You can see the table layout below ...

I finished cutting and gluing together the three layers for the river/bridge MDF board.  I'll be filling the gaps between the layers with putty or concrete mix and sanding the banks down so they are smooth to the table edge.  The three layers will give the interior river bank some depth and I'll be using the Woodland Scenics water effects to finish off the river.


I'm using three separate sections for the river to make sure I can store it easier - but most of all so I don't get any serious warping in the MDF.  I always paint the bottom of the MDF before gluing it or finishing the top --- this is very effective at eliminating the warping that is common when the top get finished.  The other key thing to do is make sure you use heavy objects to hold down the edges while the top is drying (not the middle though - in fact, I generally put some leftover MDF in the middle of larger boards to make the warp, if any, naturally down towards the table - this means the weight of the model will generally counter any minor warping).

Played in a large Bolt Action game yesterday.  Adam Clark (check out Adam's custom Bolt Action projects on his site ... http://adam-clark.com/ - they are outstanding) was kind enough to invite me over to play at his place (thank you Adam!).  Along with two long lost Sacramento based friends Craig Hunter and Tom VanDyke, Tom's brother Bob VanDyke, and two excellent fellow Canadians Eamonn Glass and Rob Bauman who were down from Vancouver, much beer was drunk and it was one hell of a fun game.  The scenario involved a meeting engagement with victory points being awarded for the capture of farms and for destroyed enemy units.

The German strategy included a "feint-in-force" - a term jokingly coined by Adam during the pre-game strategy meeting ... our "FIF" strategy would change three times before games end ... adding to the age old saying "no battle plan survives contact with the enemy" ...

We played along the long edge of the table, which was 7.5' wide by 18' long.  Three farms spaced along the central road were worth 3 victory points each, with additional victory points rewarded for each enemy order dice removed from the game.  In order to hold a farm you must have a unit within 3" of one of the buildings in the farm, and not enemy units within 3" of any of that same farms buildings.  Units moved onto the table in the first turn.  A picture of the table is below.

The game was to go 6 turns, with players rolling a 4+ to continue to a 7th, then possibly 8th turn.  Victory points would determine the winner.

The game lasted 7 turns and victory went to the British.  The Germans at the end of the game had secured 1 farm and destroyed 10 enemy order dice.  The British held a single farm and had destroyed 11 enemy order dice by the end of turn 7.  One farm was hotly contested at the end of the game.  The Germans attempted to contest the central farm on turn 7 but just couldn't bring enough to bear on the occupying British units to get it done.  An additional turn may have shifted things back into a draw or perhaps with some good rolling a German win, but it was not to be.

The many pictures below should tell most of the story ... 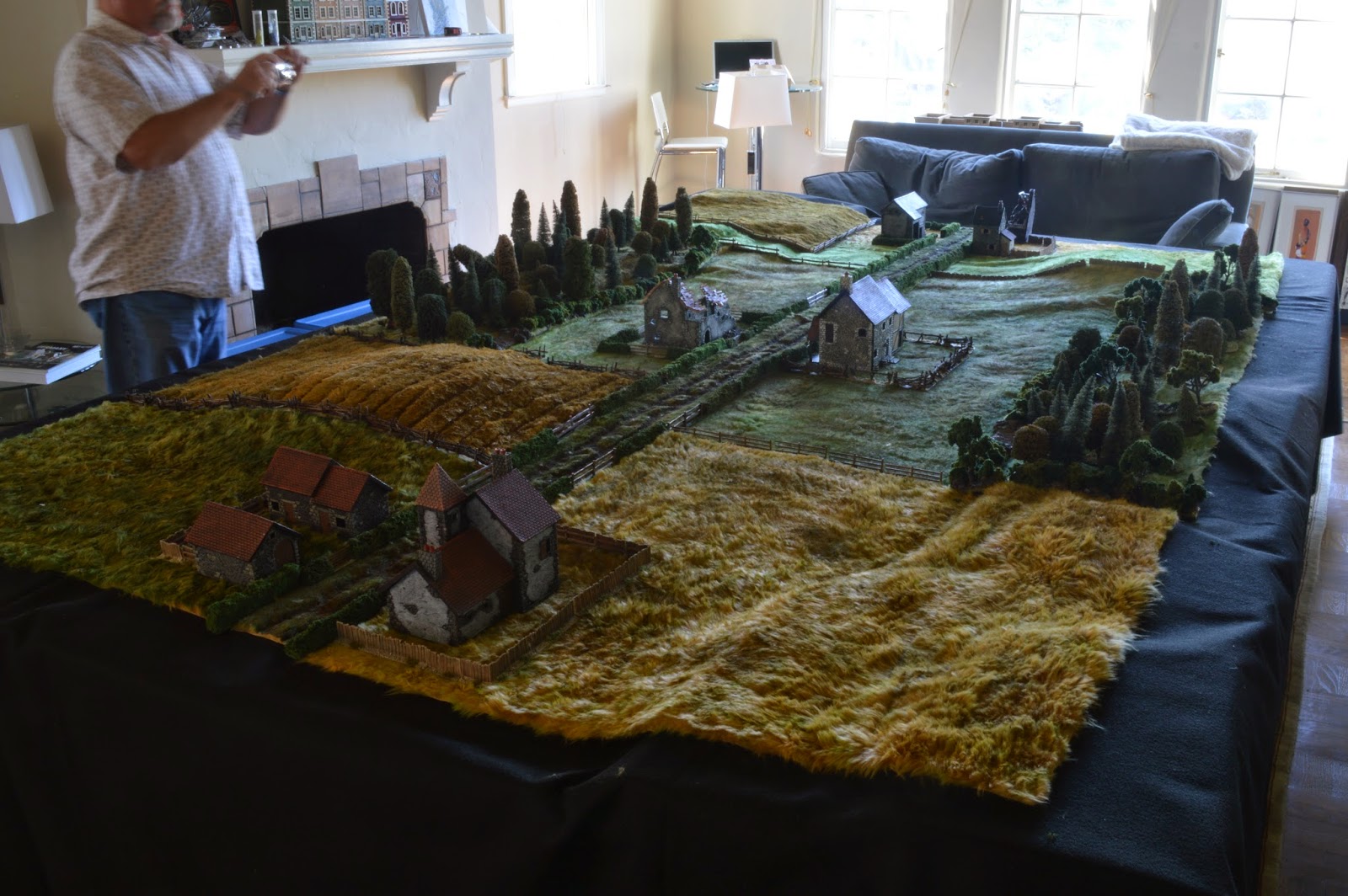 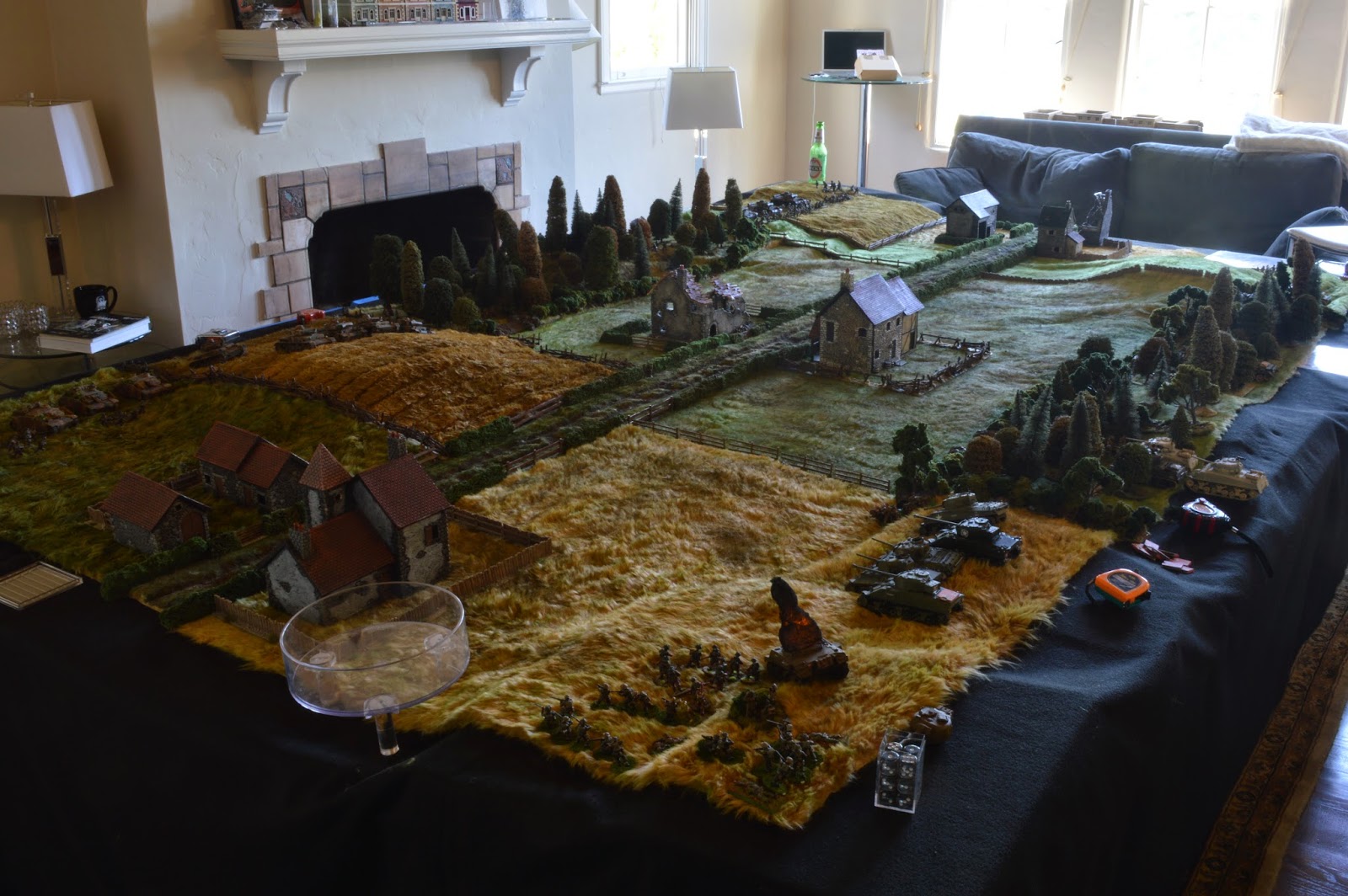 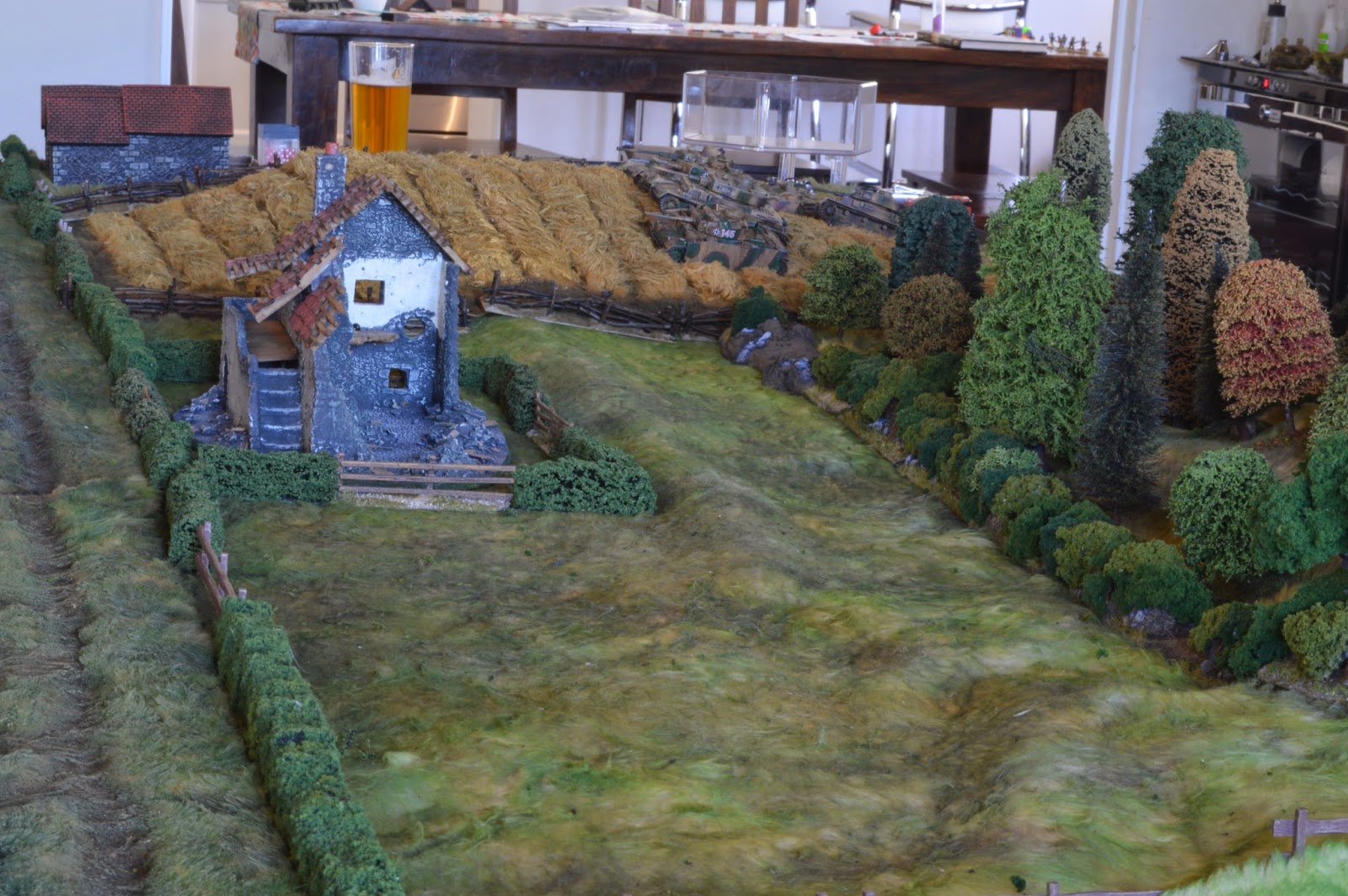 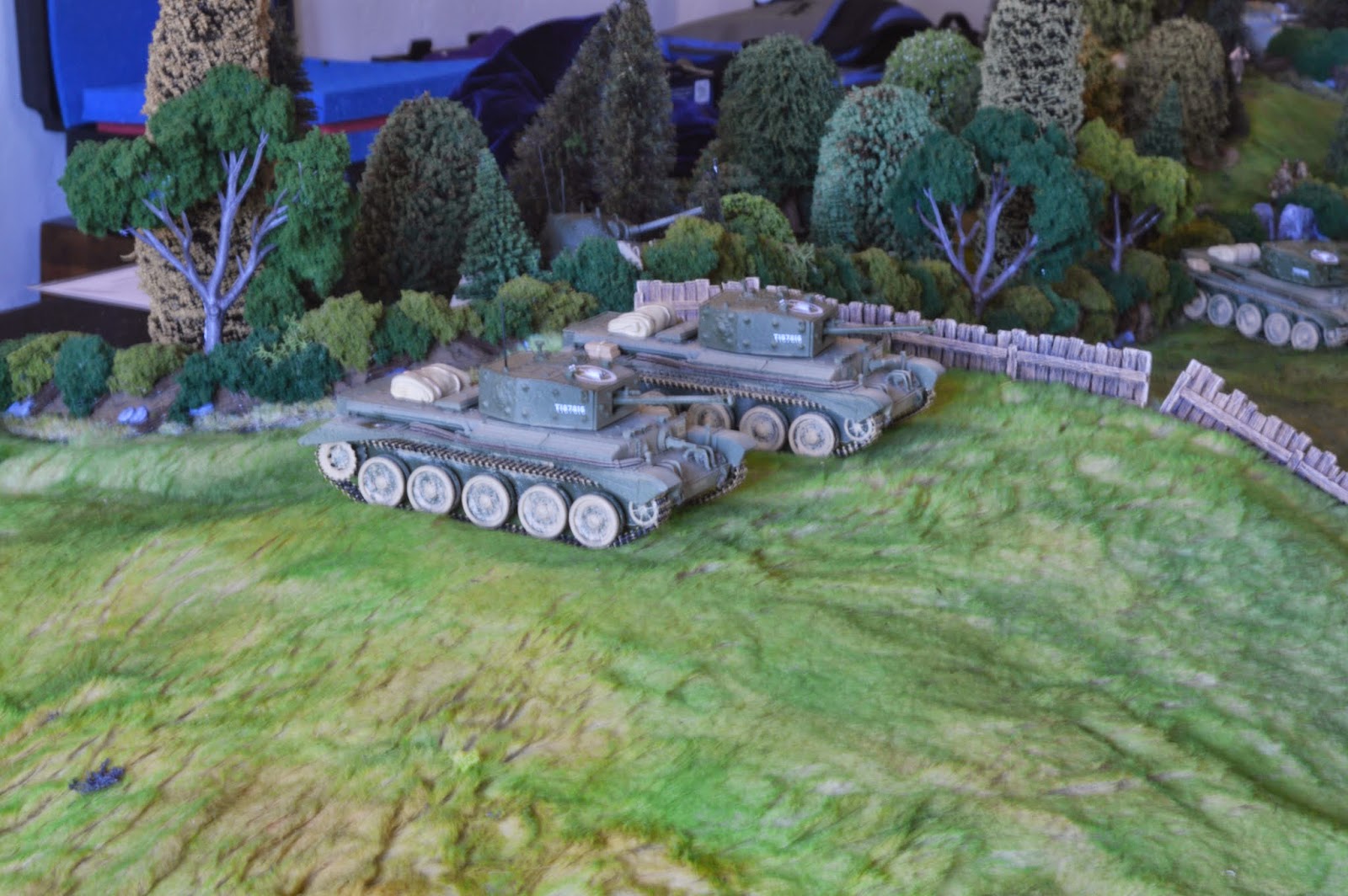 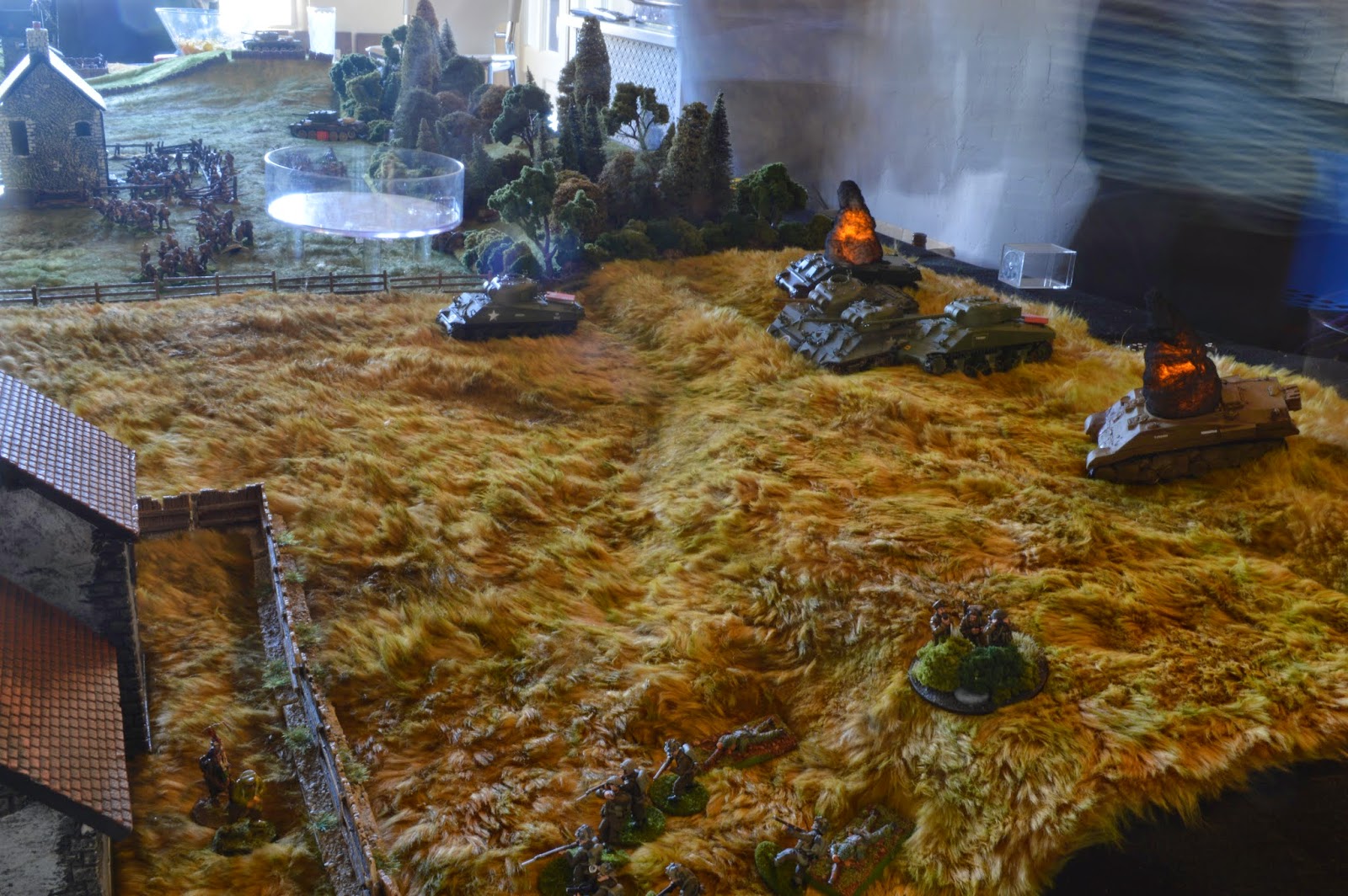 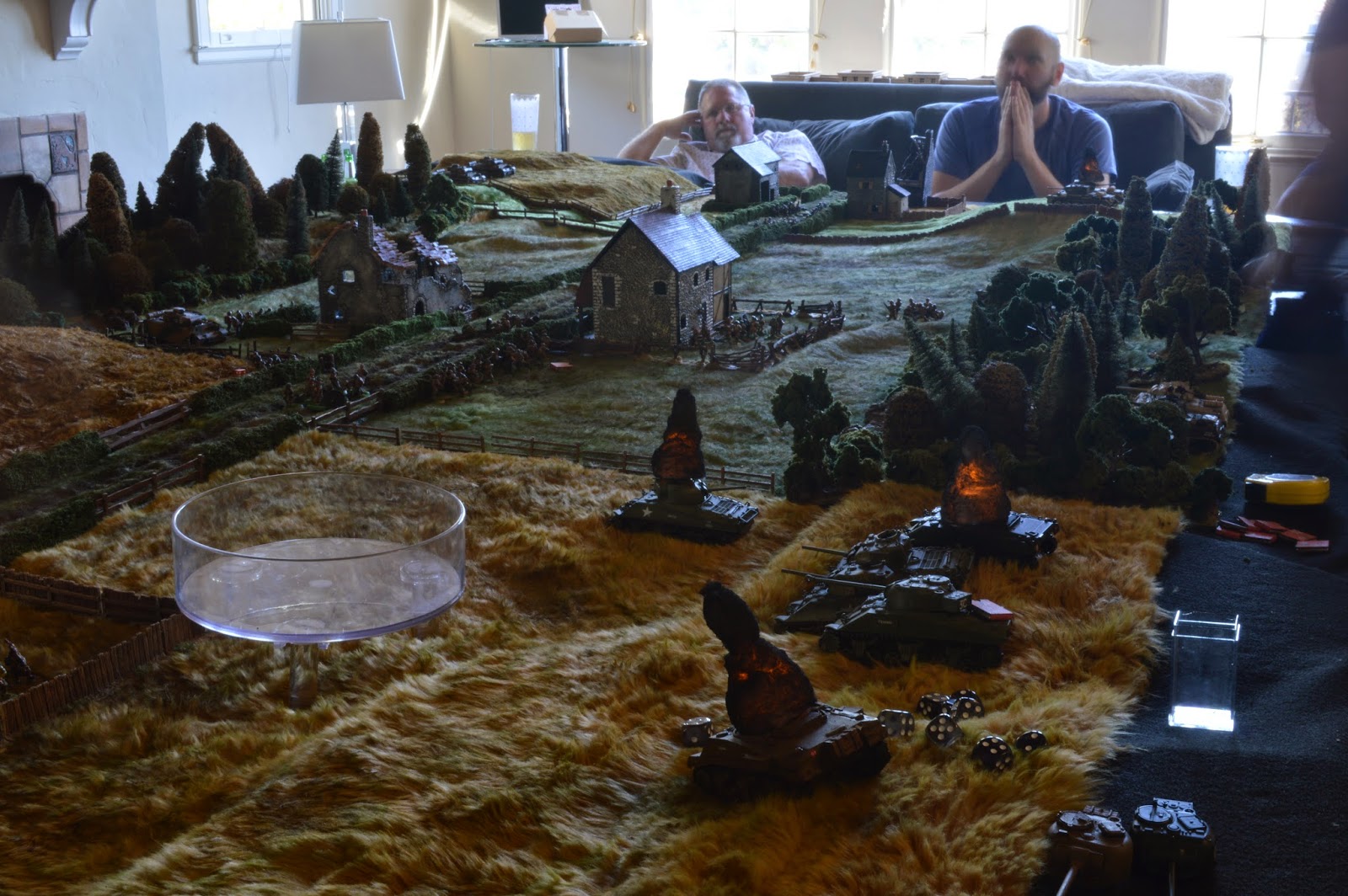 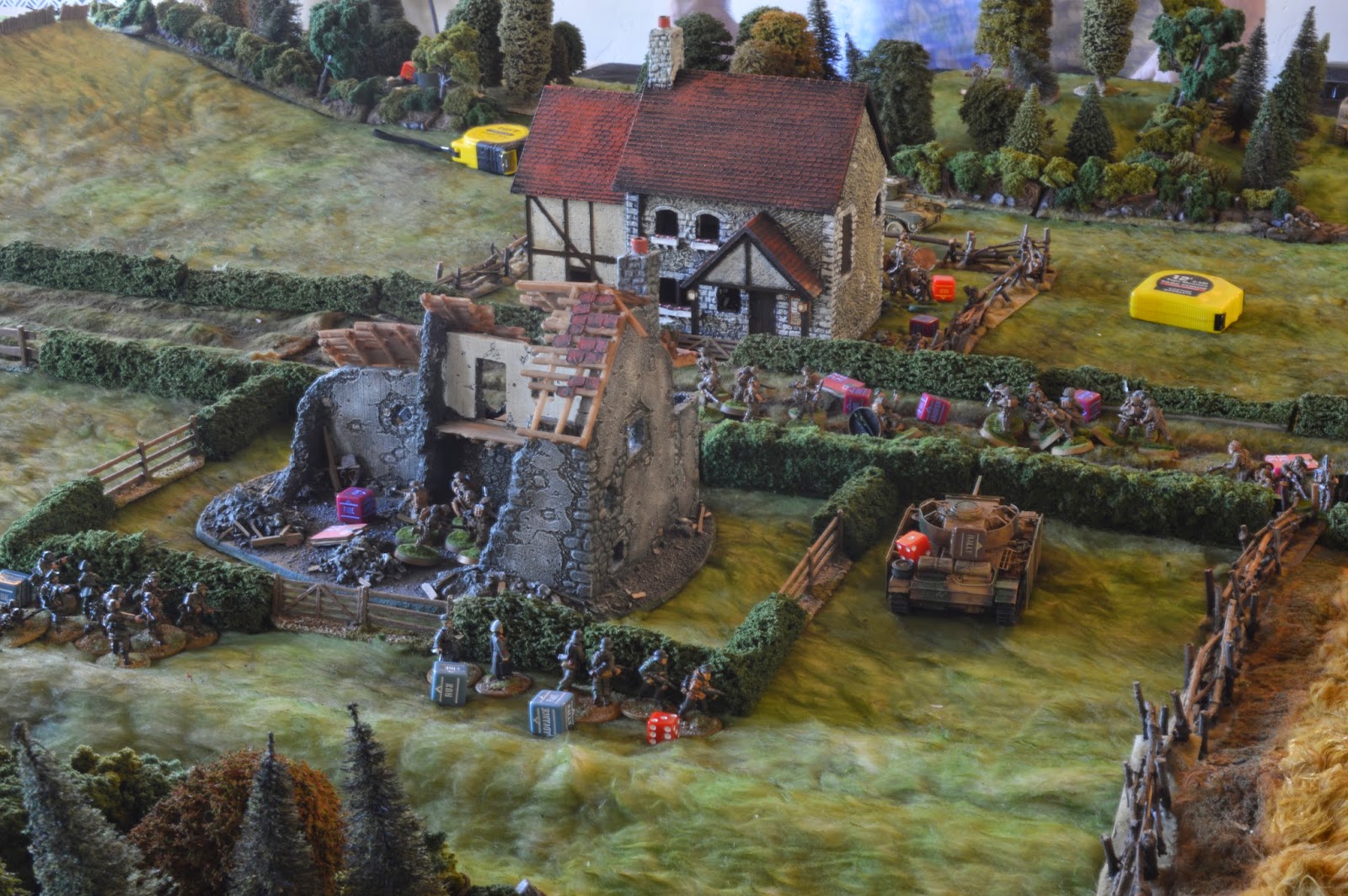 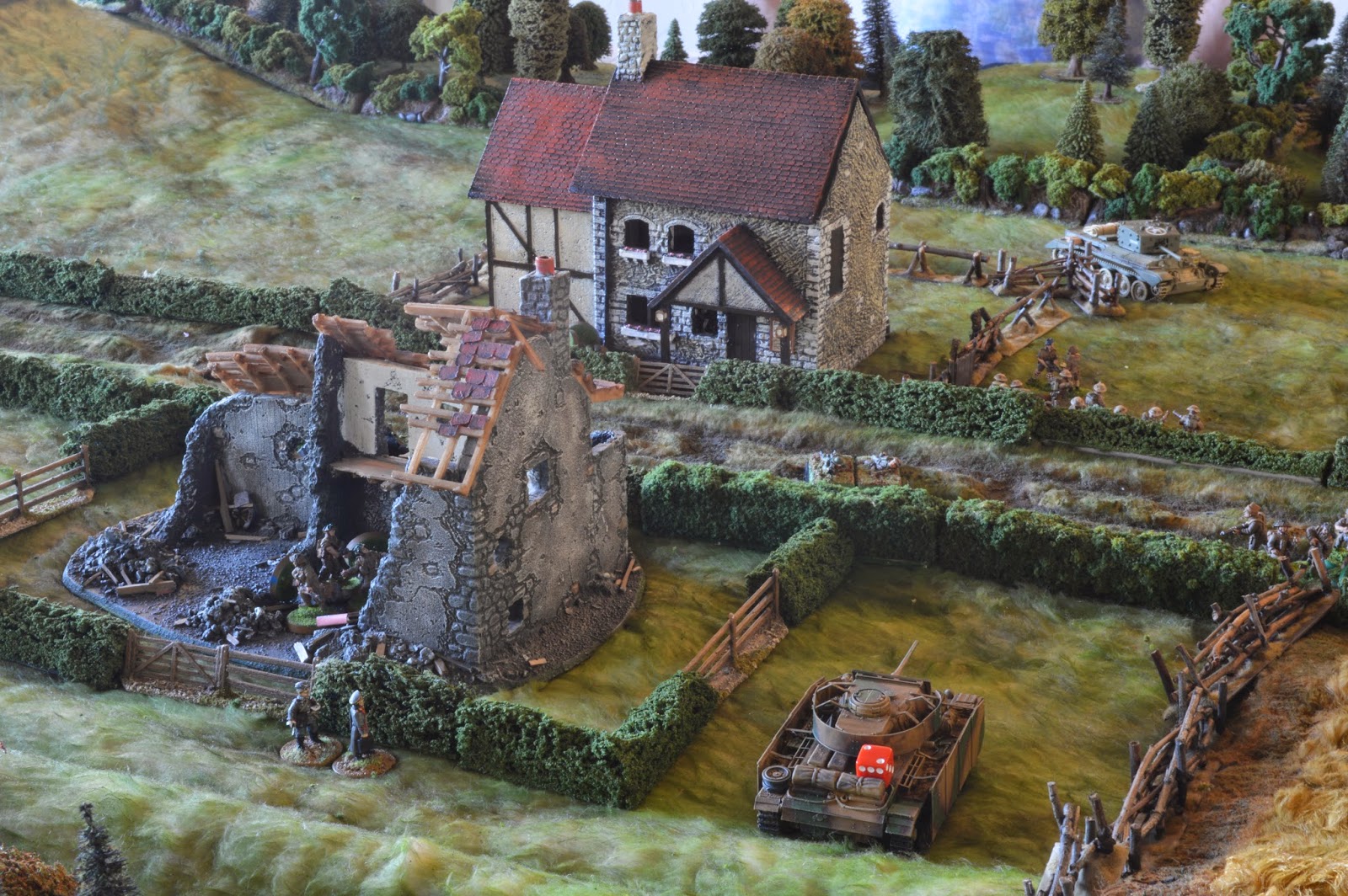 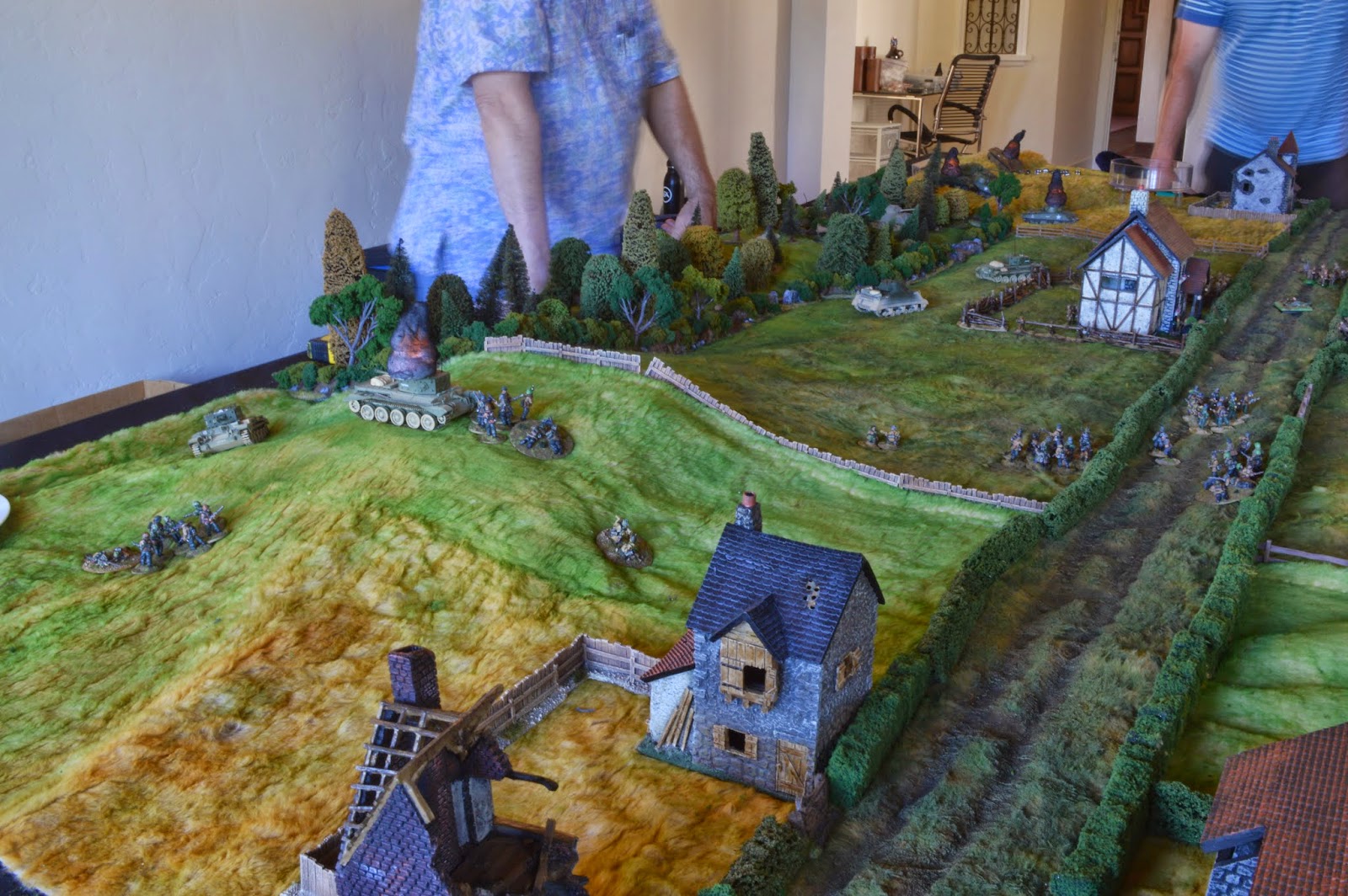 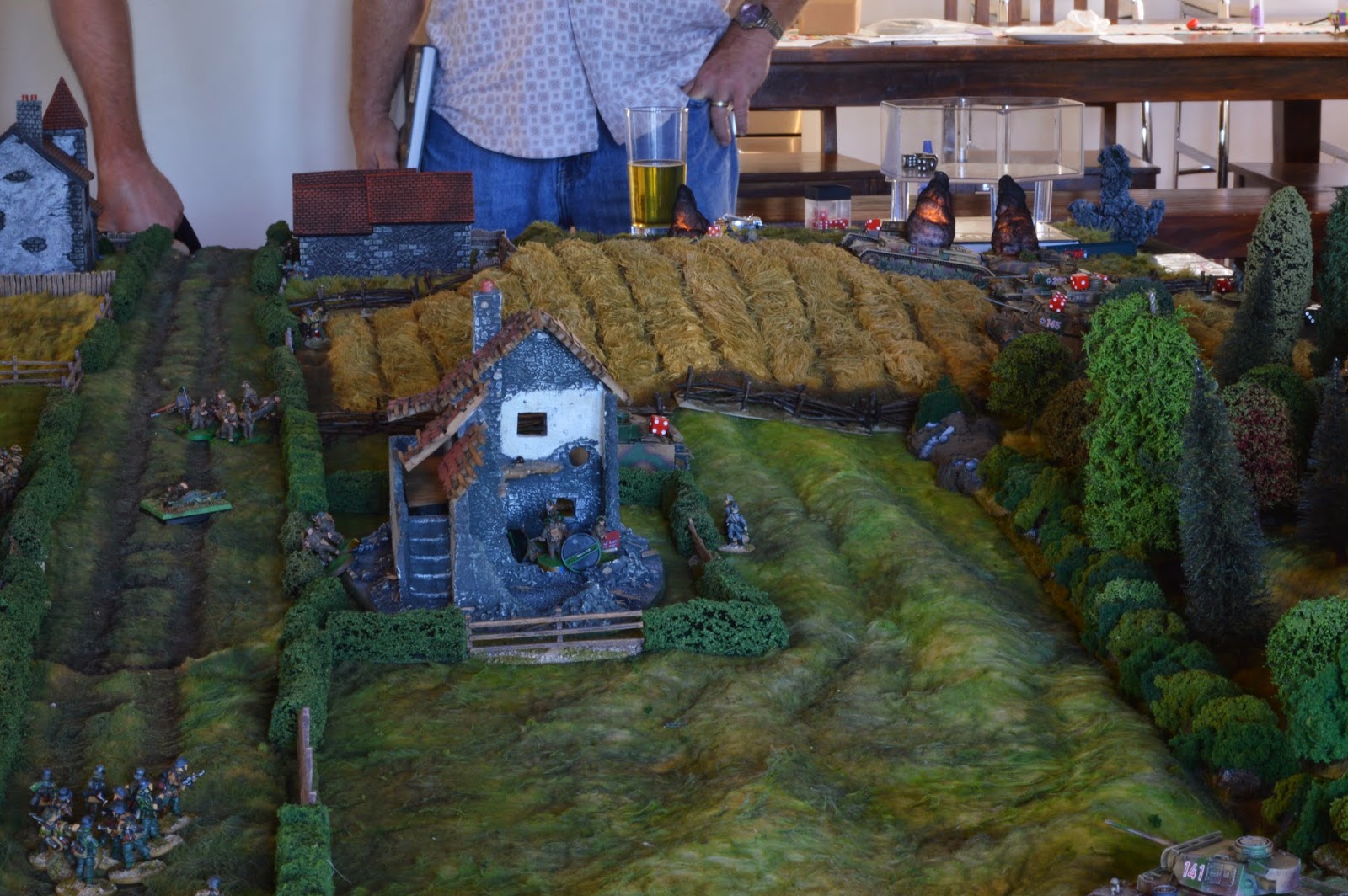 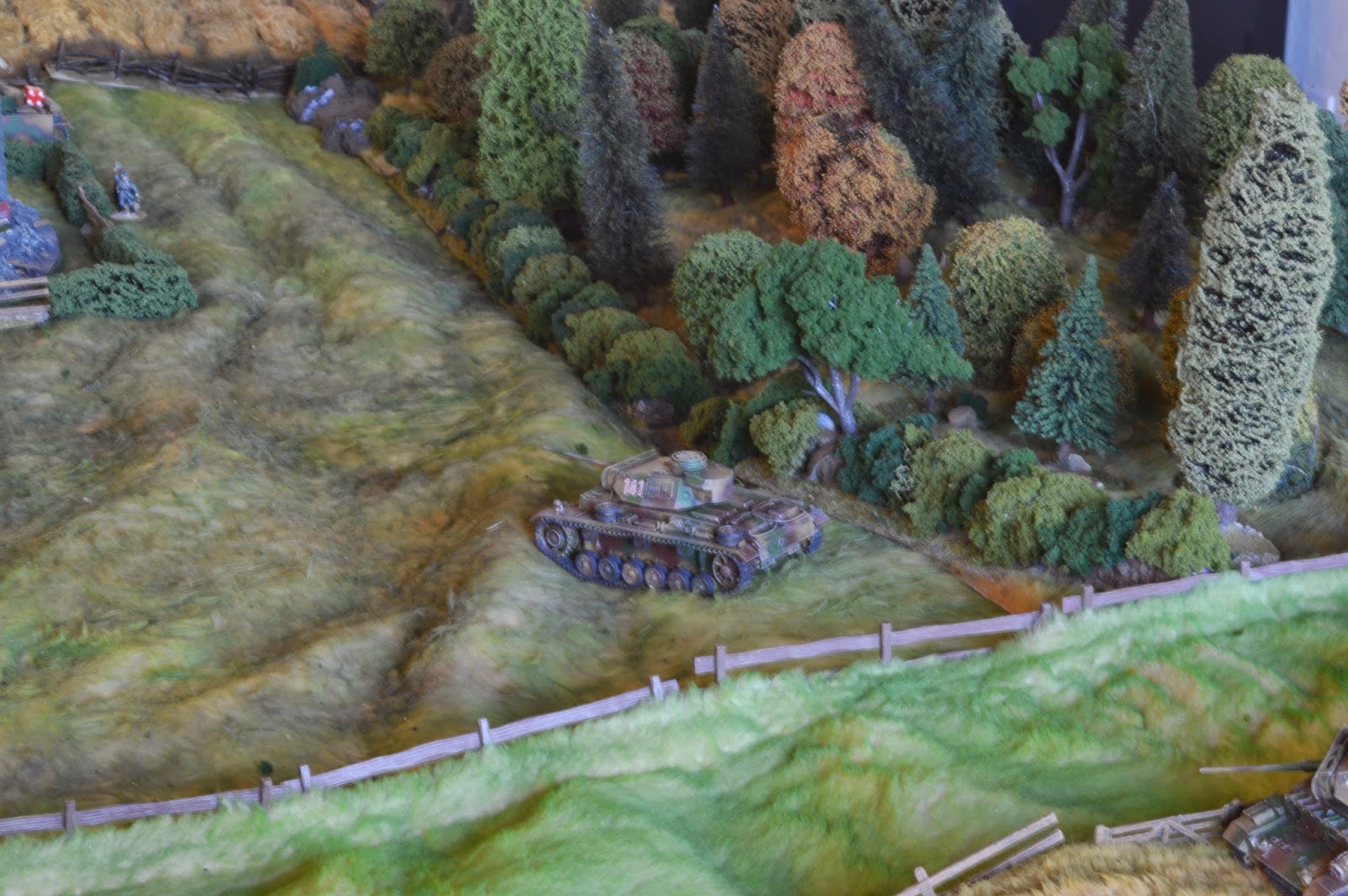 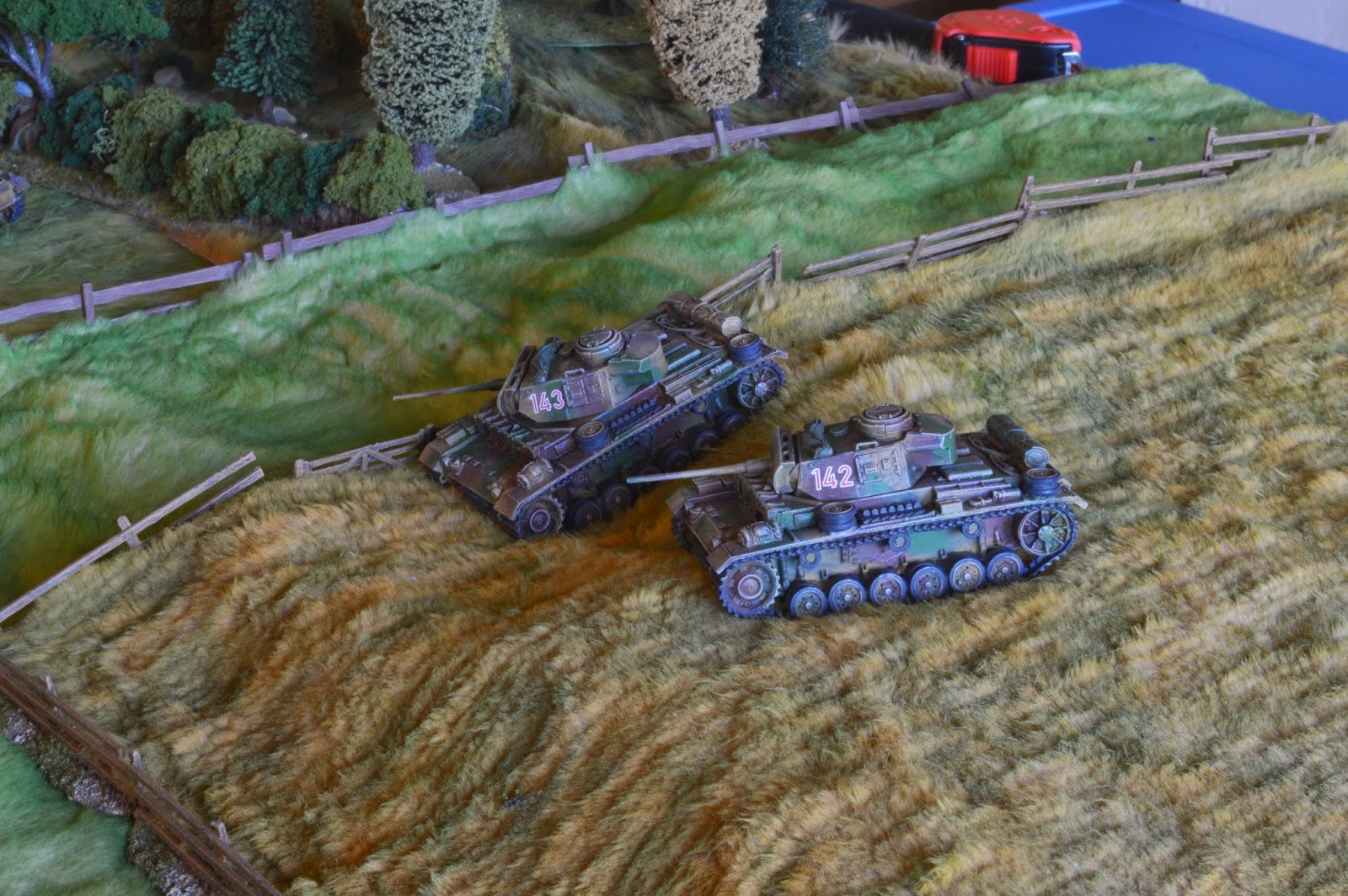 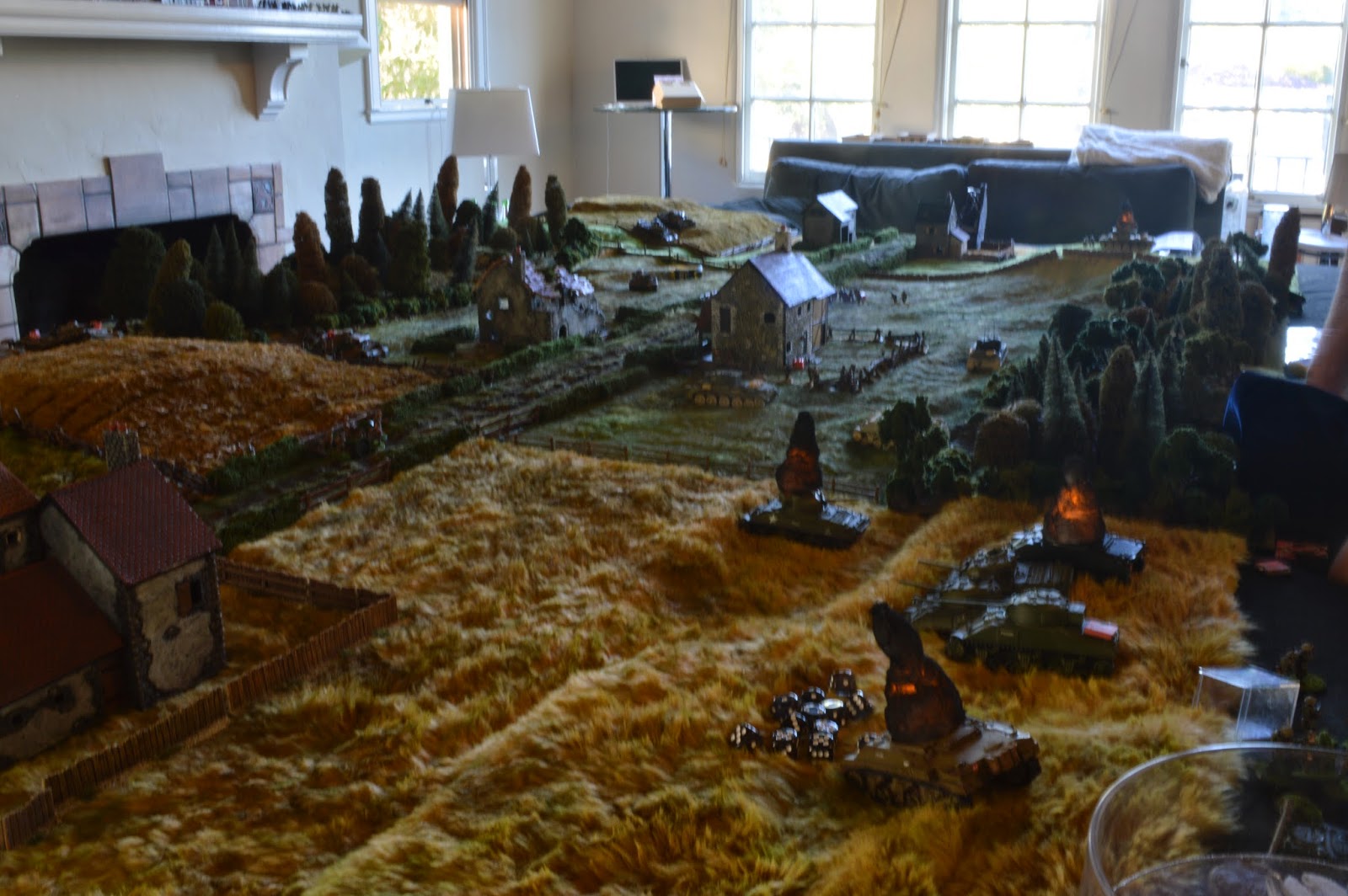 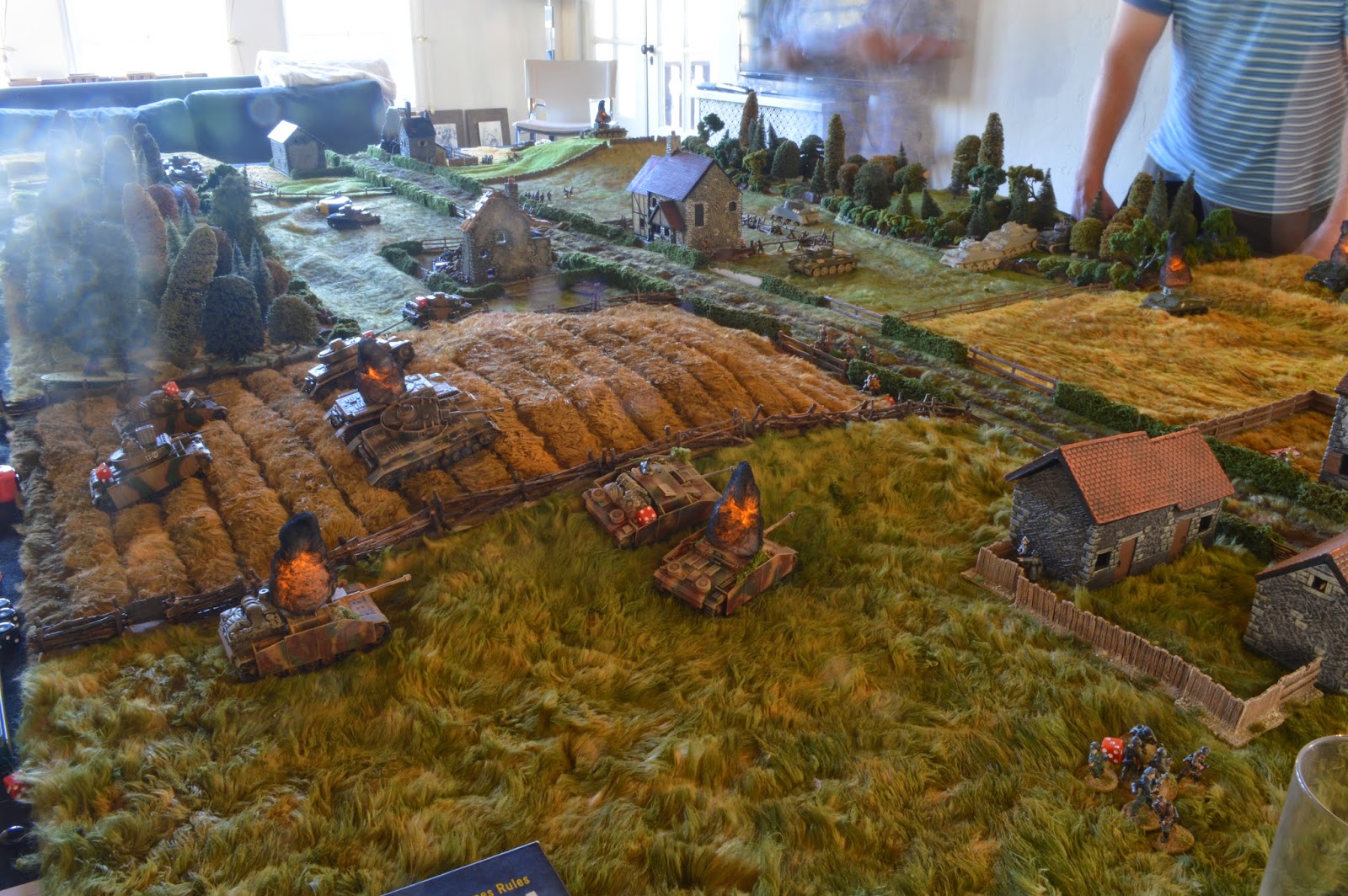