While going to look for yet another construction diagram on the Warlord site and decided I would just put all the useful links for Bolt Action in one place so I can stop attempting to search for them or root page-by-page through their Bolt Action articles (currently 31 pages, joy!).

So here you go, a set of links for construction diagrams and other handy articles:

Hopefully this reference saves you some time and is helpful!
Posted by Jay White at 10:27 AM 7 comments:

A quick update on some progress ... nearing completion of the hotel complex.  I still need to use the base paints to patch up the 2nd and 3rd floors - and I'm waiting on my 4Ground order with the additional roofing tiles I need to finish the roof for the two main hotel buildings - and to drybrush/tuff the dirt around the sides.  The sidewalk, hedges, and static grass is down for the main part ... and the cookhouse and stable roofs are done with the roofing tiles.  Getting near completion on this particular item.  Pictures below. 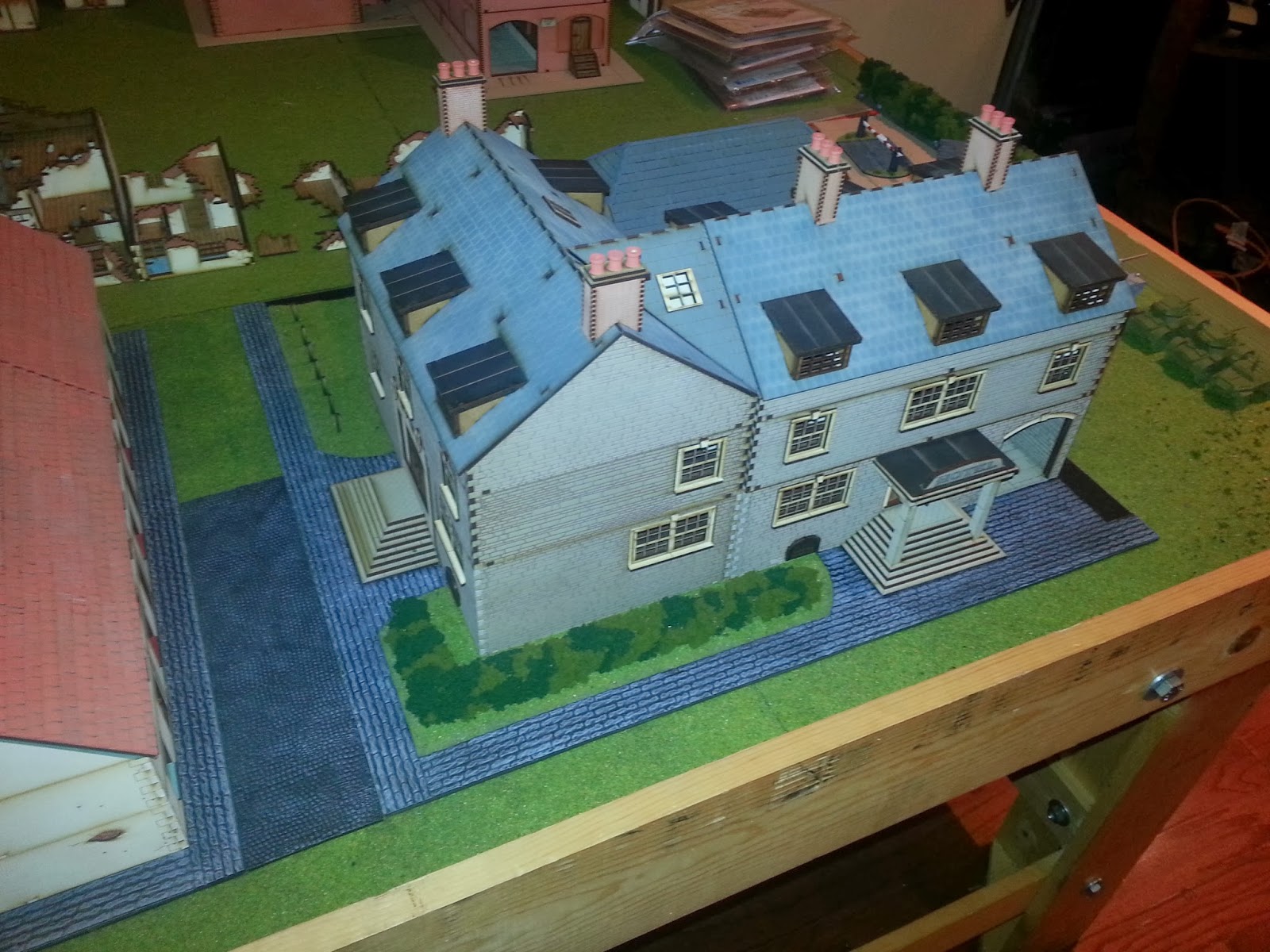 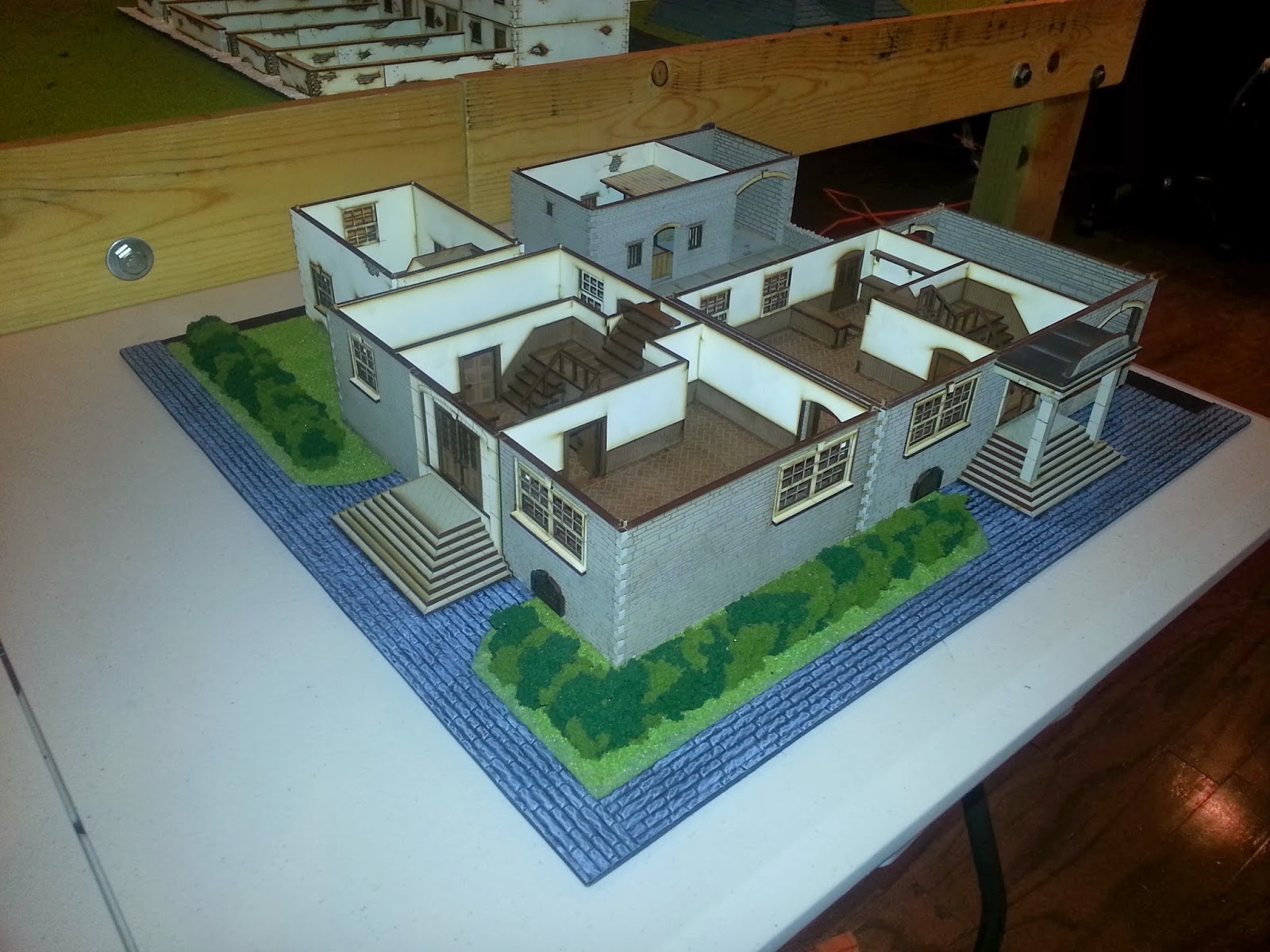 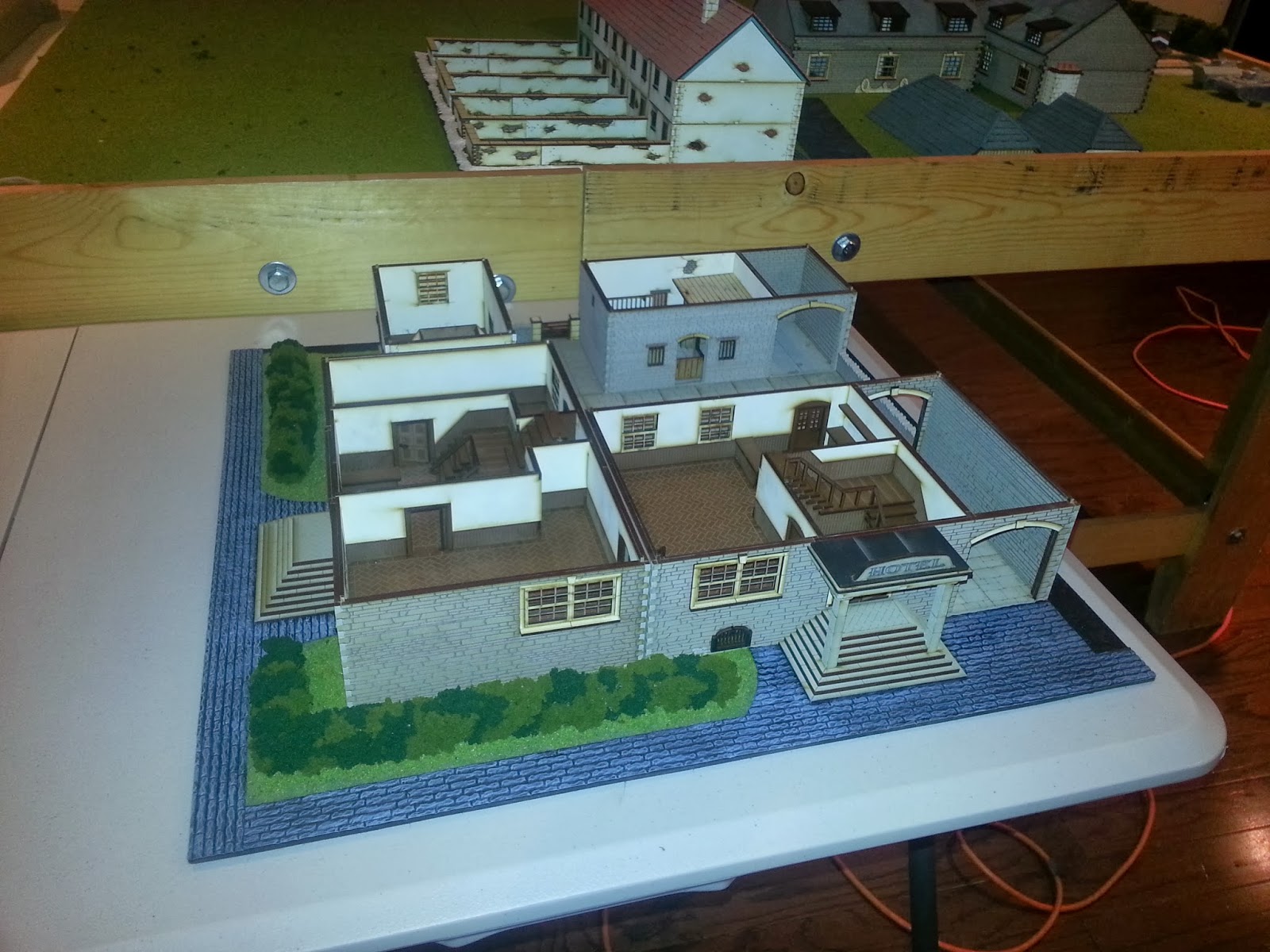 Steady progress -- starting to come together!

Just a quicky - I finished up my German checkpoint over the weekend.  This will be used in my west front town setup I'm working on ... it is nice to have some small little parts like this to add a little flavor to the town and break up the monotony of the buildings and such.  Pictures below.

NOTE: Not speaking any German myself (clearly!) I just followed the lines that are burned into the wood ... which includes the two dots above the "A" in "HALT" --- I've since filled in the two dots and now it is properly German.  Thanks to those who pointed it out! :-)

Here is a little "how to" on making bocage for your 28mm WW2 wargames.  I'll be using this for my Bolt Action games and have several lengths in progress (12", 6", 4", some with gates, and corners).  The finished product looks like the pictures below ...

Here is what you'll need:


Next I use the plaster to fill in the gap between the edge of the base and the 1/2 round wood strip.


Next I use the stone pebbles to glue some rock clusters to the base.

Sand the base - spread white glue and dip in the fine grain sand.


Next is to build the frame that will be used to glue the clump foliage into the shape of a bush/wall.  Use the drill to drill holes into the center of the base every 3 inches.  Then cut the balsa wood round pegs to fit the holes - I put my total height from the bottom of the base to the top of the balsa peg at 1.5 inches.

Use the square/rectangle strips of balsa to build a top run for the frame.


Next it is ready for painting.  Spray paint the whole thing black, then finish the base and rocks.

Next it is time to use the hot glue gun to glue the clump foliage onto the frame.  As you get little gaps here and there you can use super glue to glue in bits to fill those holes -- better to use super glue and avoid the runs/spider webs that are inevitable with glue guns.  I also got back after I'm done with tweezers to remove any spider webs of hot (now dry/cold) glue that are visible.

The last thing that should be done is to spray the clump foliage with a 50/50 mix of water and white glue to prevent the foliage from falling off easily.  You could also spray it with clear coat, but that is less effective as it only coats the outside of the clump foliage --- the water/glue mix soaks into the foliage and is far more effective.

I'll need to trim the foliage at the ends a bit when I complete more sections so that they fit tightly together.

Hope this was useful!
Posted by Jay White at 1:56 PM 4 comments:

Ok, so the drive is on - all those 4Ground buildings I bought are being assembled (many already completed) and I've already submitted the game for the KublaCon game convention that is coming up on the long weekend in May.  I'll be running the scenario on a 6'x6' table and there will be 30+ 4Ground 28mm buildings in use on the table - it should be one hell of a sight!

Here is what is underway at the moment (there are five buildings not pictured that are being assembled on the bench - another "block" like is pictures in the middle left of the below photo).


The layout will include the factory (three stories), police station (two stories), and brick three-story houses from the "Whitechapel To Baker Street" range, the hotel complex, and almost every building, some in multiples, from the "World At War" range.

I have finished the basic assembly of the hotel complex, now on to the details.

The "details" now are to use the 4Ground roof strips to overlay the roof and make it look even better - and to use the 4Ground base paints to patch up the corners and such with paint.  I've managed to finish the stone coaching stable and you can see the results below: 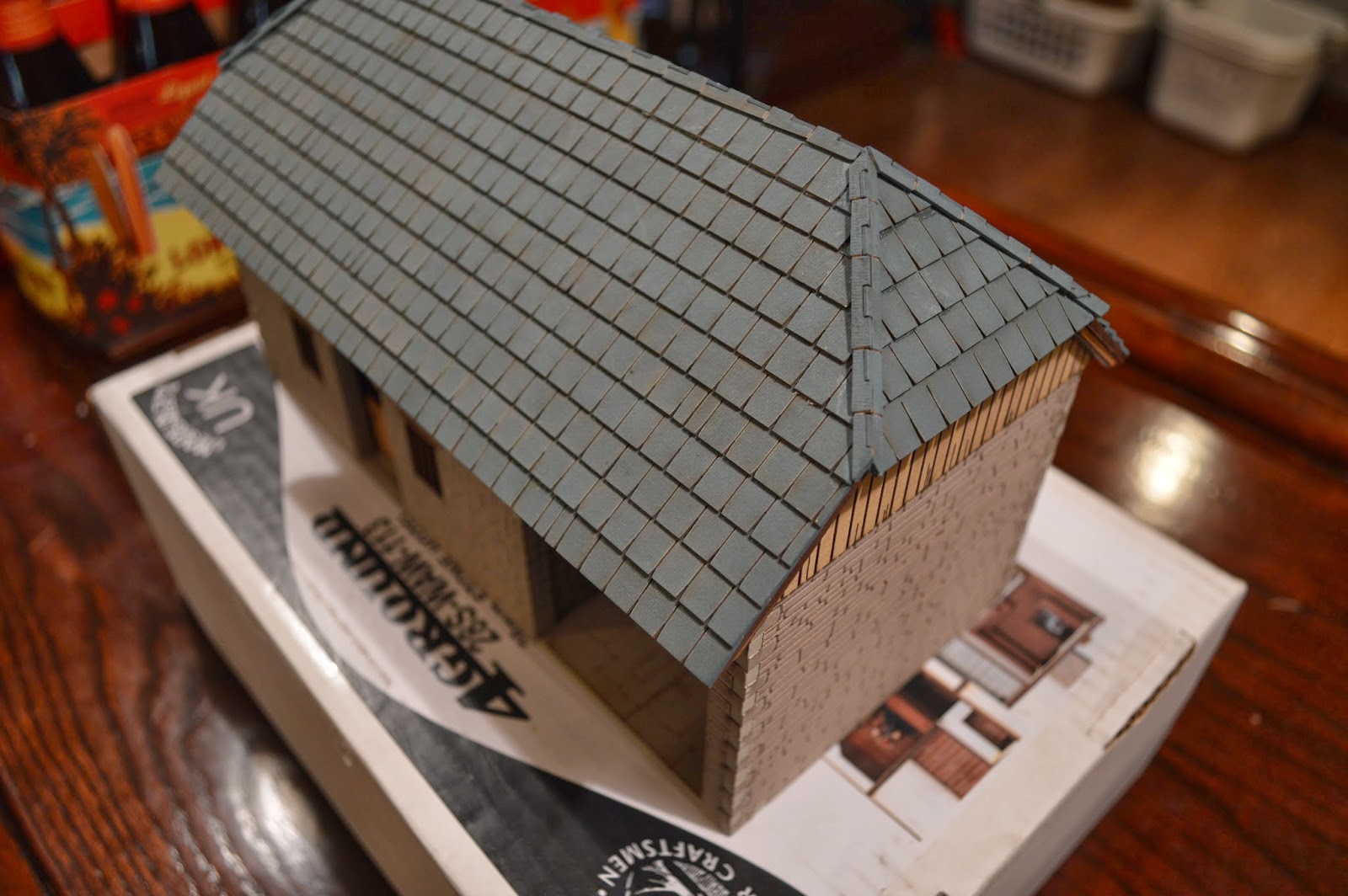 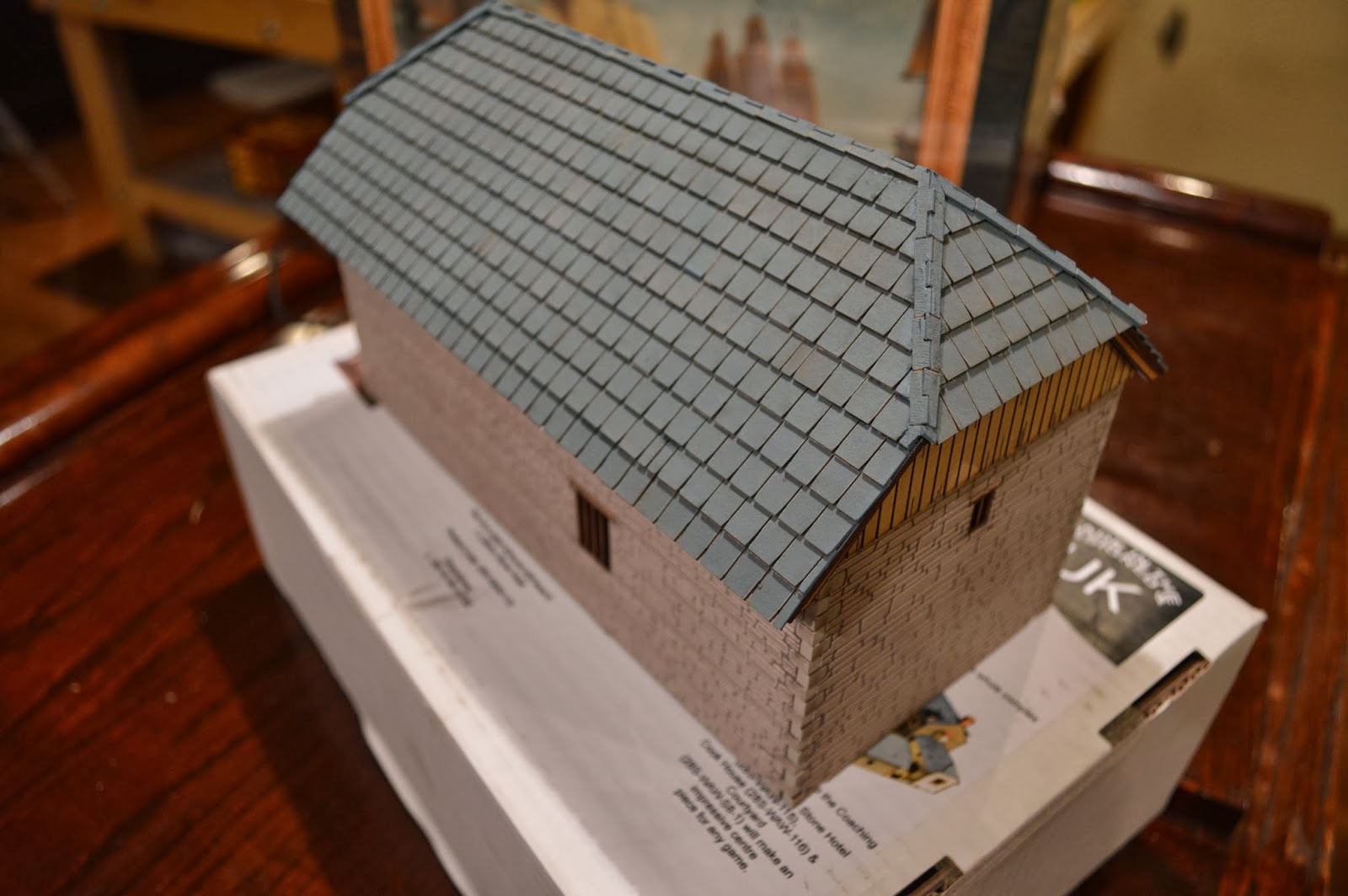 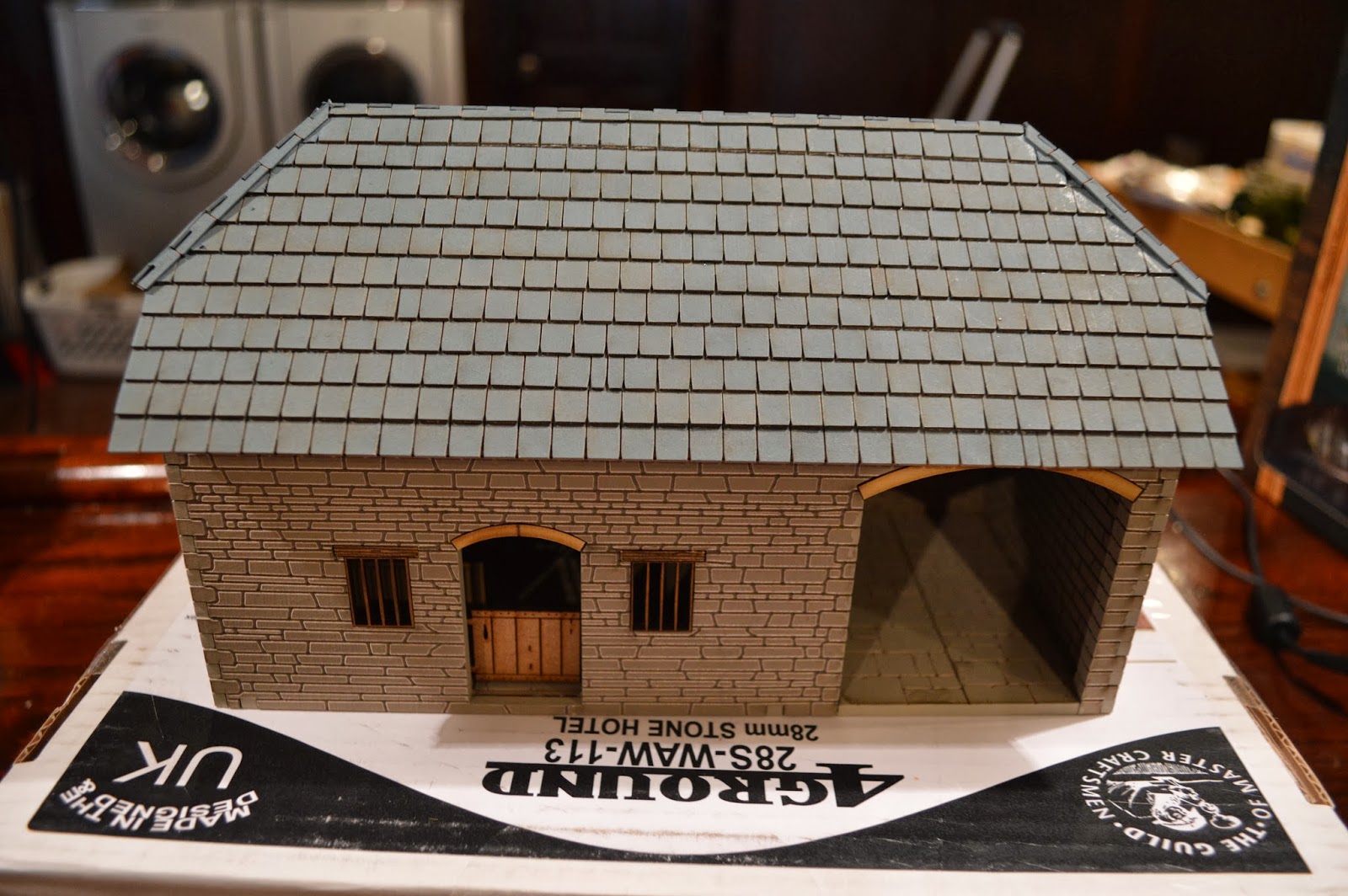 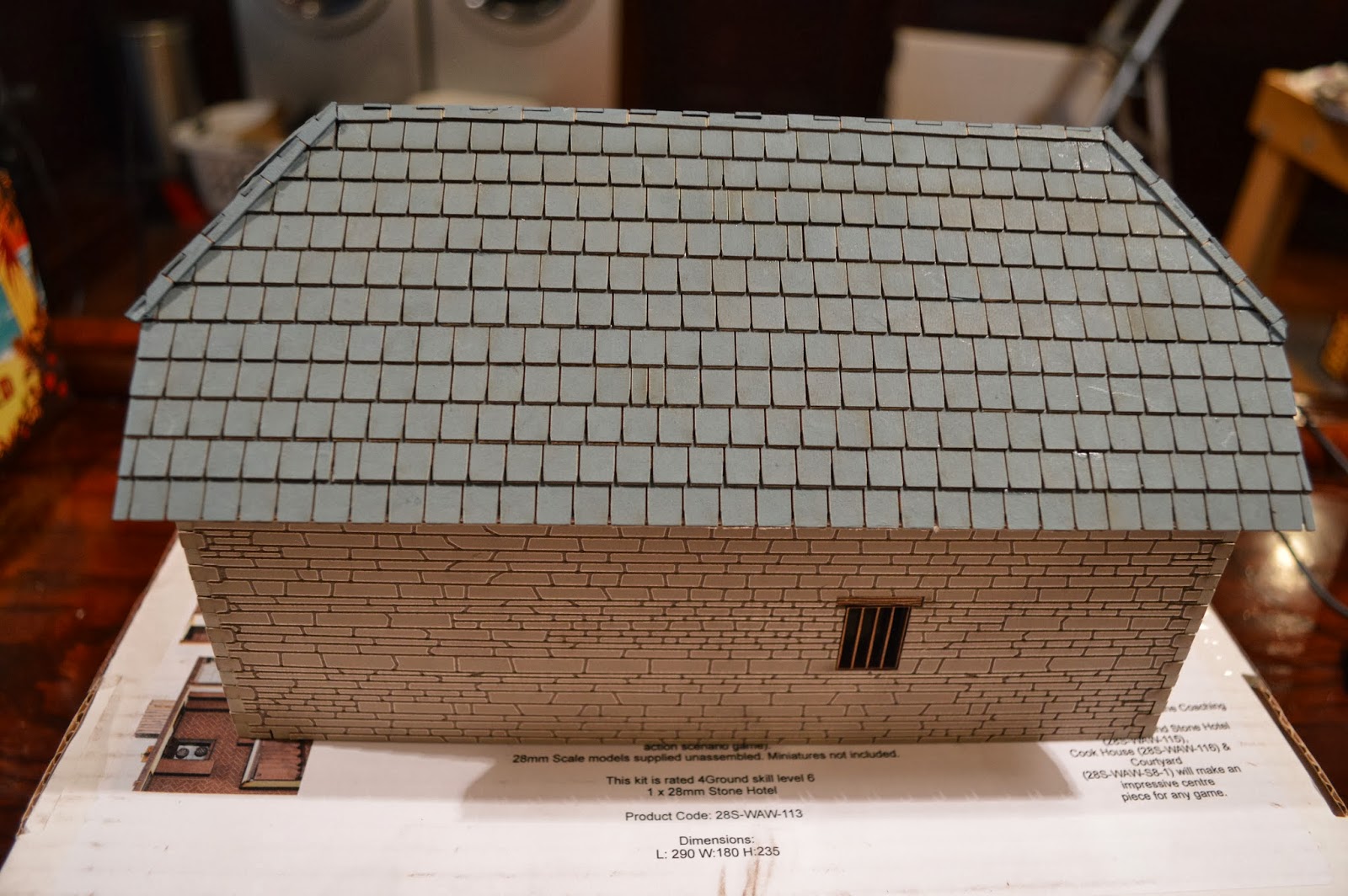 Hopefully you agree - as good as the base building looks out of the box, the added time to enhance the roof and touch up the paint is well worth it!

I'm cutting all the MDF bases for many buildings this weekend (including some buildings for Muskets & Tomahawks from 4Ground) ... I'll be posting progress regularly as this project is in full swing!  In addition to the many 4Ground buildings, I'm adding extra scenery for my WW2 layout that includes:


More updates to come, tons of progress is getting made.
Posted by Jay White at 2:23 PM 8 comments:

I was able to take advantage of a day off from work to play another game of Bolt Action. Matt Hilzendrager, Roy Scaife, Tibor Ipvavic, and myself played.  It was Matt and Tibor's first game of Bolt Action so we introduced them to the rules with a basic point defense scenario (similar to the last one we played).

Matt brought along some very excellently painted SS troops so we used those and reinforced them with my regular German Heer.  Below are the forces we used.

I have just one building left to build to complete the "hotel complex" that is sold by 4Ground - but I decided we could use it anyways for today's battle as it would provide a nice primary objective for the allies.  Matt brought a couple of swamp mats he has and so we employed those as well on the table (light cover, marsh, no run orders).  The SS would hold the hotel area along with the Panther and Heer MMG team.  The recce section (the 222 and 234) would go to whichever side they became needed most (this would be the hotel side), and the remaining Heer units (mortar, infantry squad) and the StuG would hold the church on the right flank.  The allies entered from the table edge on the first turn with the British entering around the dirt road ahead of the church and the US entering the main cobblestone road ahead of the hotel.

Both Roy and I had to attend to family in the evening so we called the game a little early - but it was clear that the Germans couldn't prevent the allies from taking 1-2 objectives at a minimum.  The Germans would have fared better, but superficial damage and failed penetrations would haunt too many shots.

Here are some pictures form the game.

It was at this time that both Roy and I had to attend to our fatherly duties and pickup kids and feed them and the sorts ... with it being a school day tomorrow.  For a large game with two new guys playing, and lots of side discussion, we got to the point where we could call it ... the tide was swinging full bore towards an allied victory.  The best part, Matt and Tibor loved the rules and are now hooked on Bolt Action!