The Chicago Way - The Rules

A great big box of awesomeness arrived on my doorstep this past week.  The box came with the models, rules, cards, markers, dice, vehicles, and buildings.  I also have vehicles from Sloppy Jalopy that will help add some more bling to the prohibition era table. 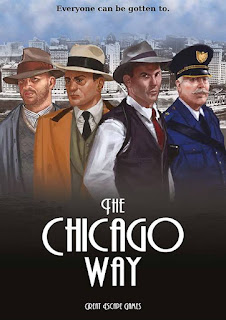 There will be several posts covering my progress with this new game, but to start I figured I would cover the rules.  If you are not familiar with Dead Man's Hand (DMH) you can check out my video on how that game plays here.  The Chicago Way (TCW) is 90% similar - but to that point the purpose of this post is to highlight the differences from DMH.

Before jumping into the rules highlights, there are two great links that should be checked out that I'll share here.  Both are from Ivor Evans over at the Saturday Mornings blog.  The first is his unboxing of his Chicago Way stuff - check that out here.  The second involves customizing the 4Ground warehouse into a Wrigley's factory - check that out here.

The book is expertly put together and designed.  The art is beautiful.  The greatness in the system for both DMH and TCW is how straight forward the rules are while still delivering an abundance of tactical playability.

Perhaps the most notable difference in the rules as compared to DMH is the introduction of vehicles.  There are of course dedicated rules for vehicles, but they also have some minor changes to other game mechanics, such as how initiative cards are dealt out.  So let's break it down here:

Most everything else is the same as DMH.  Duck back and such ... jumping between gaps ... movement over obstacles and so on.

Hopefully this gives you a good feel for how the rules are different.  I'm just starting to dig into my box of goodies and I'm excited to start building/painting.
Posted by Jay White at 6:51 PM 6 comments:

Email ThisBlogThis!Share to TwitterShare to FacebookShare to Pinterest
Labels: The Chicago Way

Well, life has been a roller coaster this past month!  I start a new job on Monday after leaving a company I was at for a combined 12.5 years.  Although based locally, my team is meeting in North Carolina next week so it is off to the airport tomorrow.  I plan on bringing some stuff with me to work on during the evenings.

I've made ton of progress on spring cleaning and put my entire Napoleonic's collection into new bins (long overdue!).  My next batch of stuff to send off to get painted will see lots of casualties added for my Napoleonic armies, ACW, and (again, long overdue) my French & Indian War armies.

This past week I was able to play my first game of Star Wars Rebellion (new board game from Fantasy Flight Games).  I must say the game is AWESOME.  Highly recommended.

The game boils down to the Empire attempting to locate and destroy the hidden rebel base while the Rebels attempt to gain enough points to intersect a rebel point tracker with the current turn.  If the Rebels can gain enough favor before their base is found and destroyed they win - otherwise the Empire wins.

The Empire is a bit like the US in WW2 - manufacturing starts out not that far off from what the rebels have - but it increases massively as the Empire spreads it's influence (or oppression) throughout the galaxy.

The Rebels are in for a tough time ... trying to win small victories here a there while the Empire crushes any semblance of Rebel power and influence.

The whole game revolves around using your leaders to complete missions each turn.  Leaders can also be used to oppose the other players missions, move fleets, and provide help in combats.

For my game I choose Endor as the rebel base location and it just so happened that the Empire player looked there last.  Unfortunately, my rebel missions and objectives I pulled really set me back ... whenever I was about to get an objective and move the rebel marker the condition would be foiled by the Empire (total luck as the Empire player didn't know what the objectives were).  The Empire did find the base eventually and a massive assault occurred, and despite noble resistance by the rebels in the base, the Empire overwhelmed them and won.  There was a good possibility had the current turn finished I would have been able to get the rebel marker to intersect the game turn marker.  So, even with me screwing up the rebels in every way I still had a chance to pull it out in the end.

On a funny note - based on the game I played - the movies got it wrong ... the rebels didn't blow up the death star ... or should I say either death star because in my game a second one got built and the first was untouched.  Mon Mothma was captured by Darth Vader and turned to the Dark Side by the Emperor (a massive loss for the Rebels as she is great for diplomatic missions - as in turning neutral planets over to being loyal to the Rebel cause).

If you haven't tried the game yet I highly recommend it.

In other news - I'm going to be doing up some posts when I get back from my work trip this week.  I have a second USMC squad done and based for modern BA - just need to take pictures.  I've started the rebasing of my Fort William Henry model, and I'm painting up the tents for the M&T scenario I'm running at KublaCon this year.  Lastly, we've scheduled a play test of the Napoleonic game we are running at KublaCon - which sees the British, Portuguese, and Spanish fighting against the French ... newly finished Spanish troops will be used ... and they are beautiful ... so stay tuned.
Posted by Jay White at 8:42 PM 8 comments: