I've been a little distracted by all this new Horus Hersey stuff coming out from Games Workshop.  I ended up with the core boxed set due to a YouTube giveaway (for one of the channels I follow).  How lucky!
But then I bought some more stuff ... oh boy!  I ended up wanting to paint these figures.  I've always liked the beak style of armour (known as beakies).  Funny enough, I *don't* like Warhammer 40k.  It's all just too overwhelming, too many factions, etc.  What's great about the Horus Hersey is it is much more straight forward - being a civil war.
So, I decided to do the Imperial Fists for the loyalist legion and Sons of Horus for the traitor legion.  I always start with a test figure to get the colours and process down.  I was also excited to use the very new 2nd gen contrast paints from GW.  After four different experiments I finally finished the test figure ... 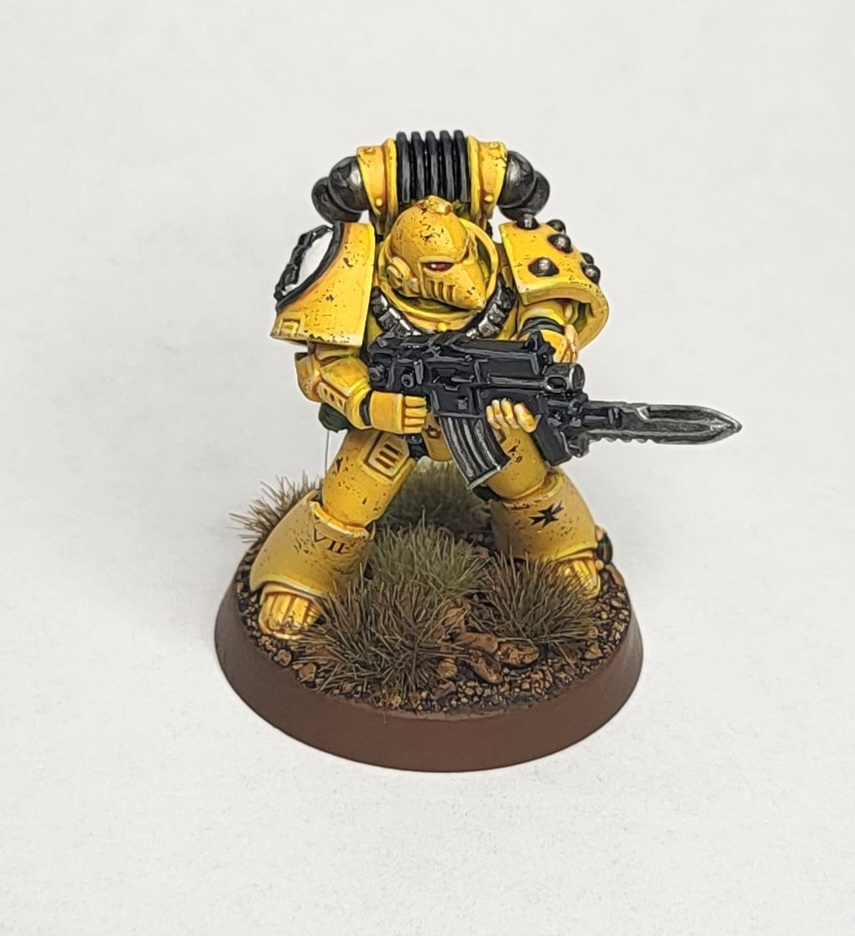 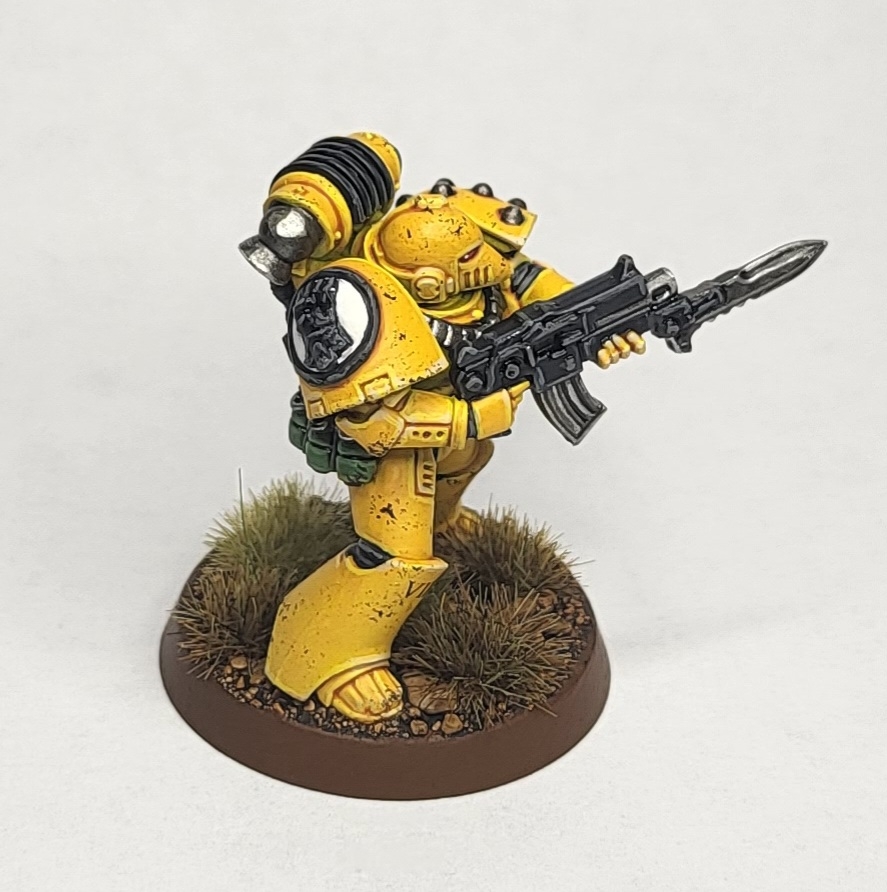 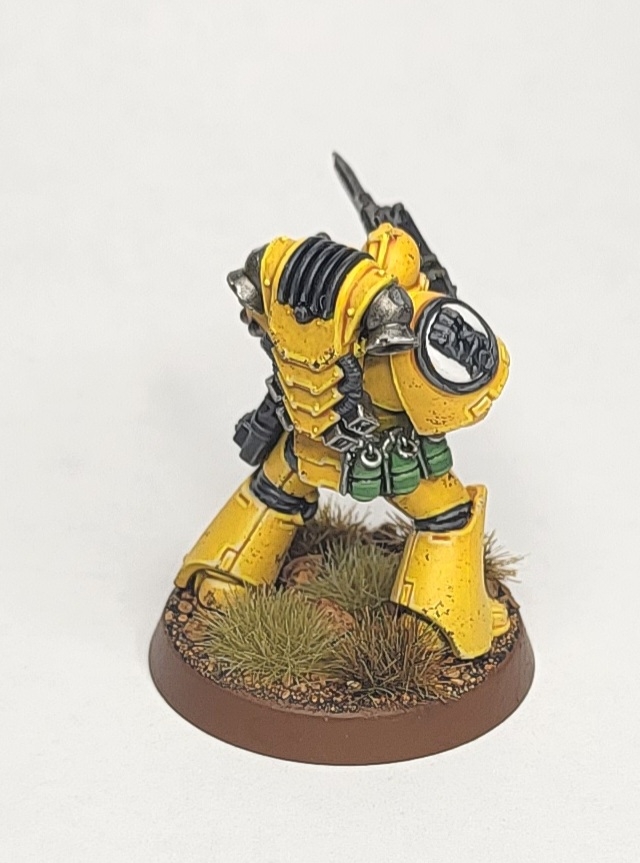 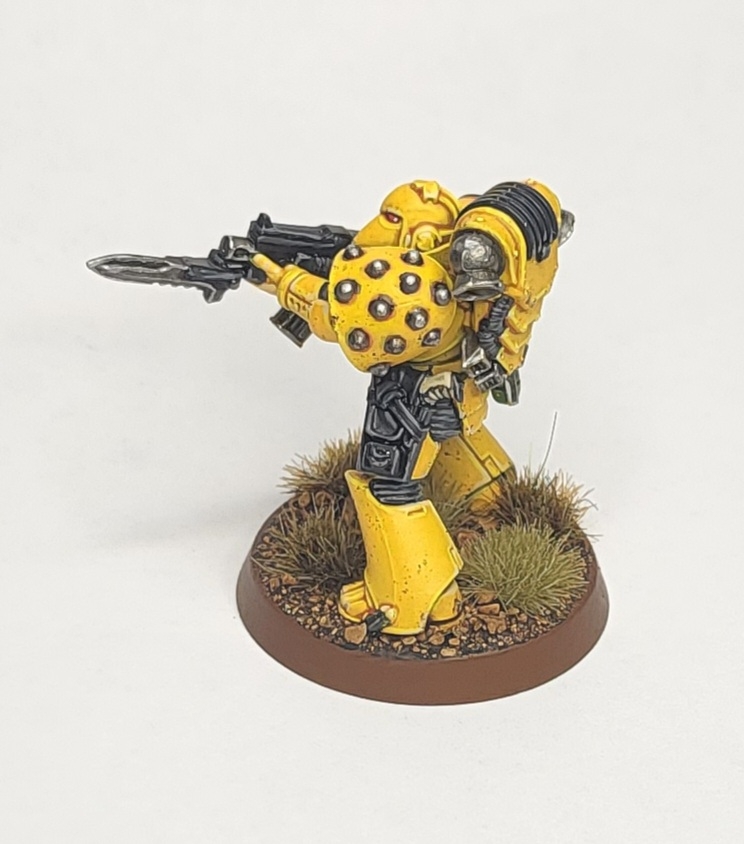 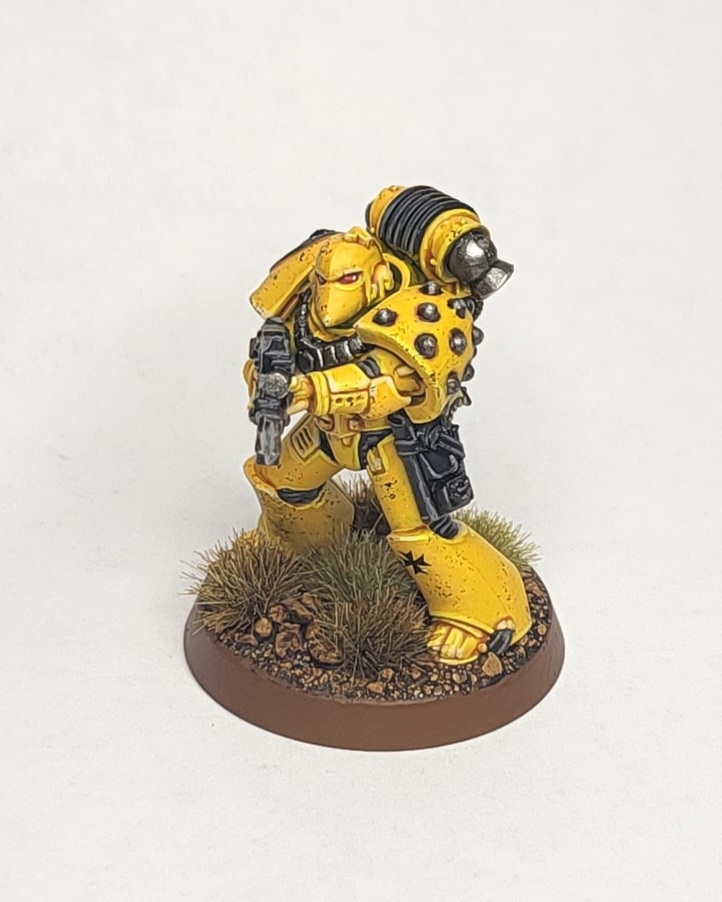 I'm happy with the final results here.  I usually do a very "clean" finish for my figures but in a rare deviation I decided to do some light weathering/battle damage.  I used a torn peice of sponge and GW Rhinox Hide to apply the damage.  Very easy to do. 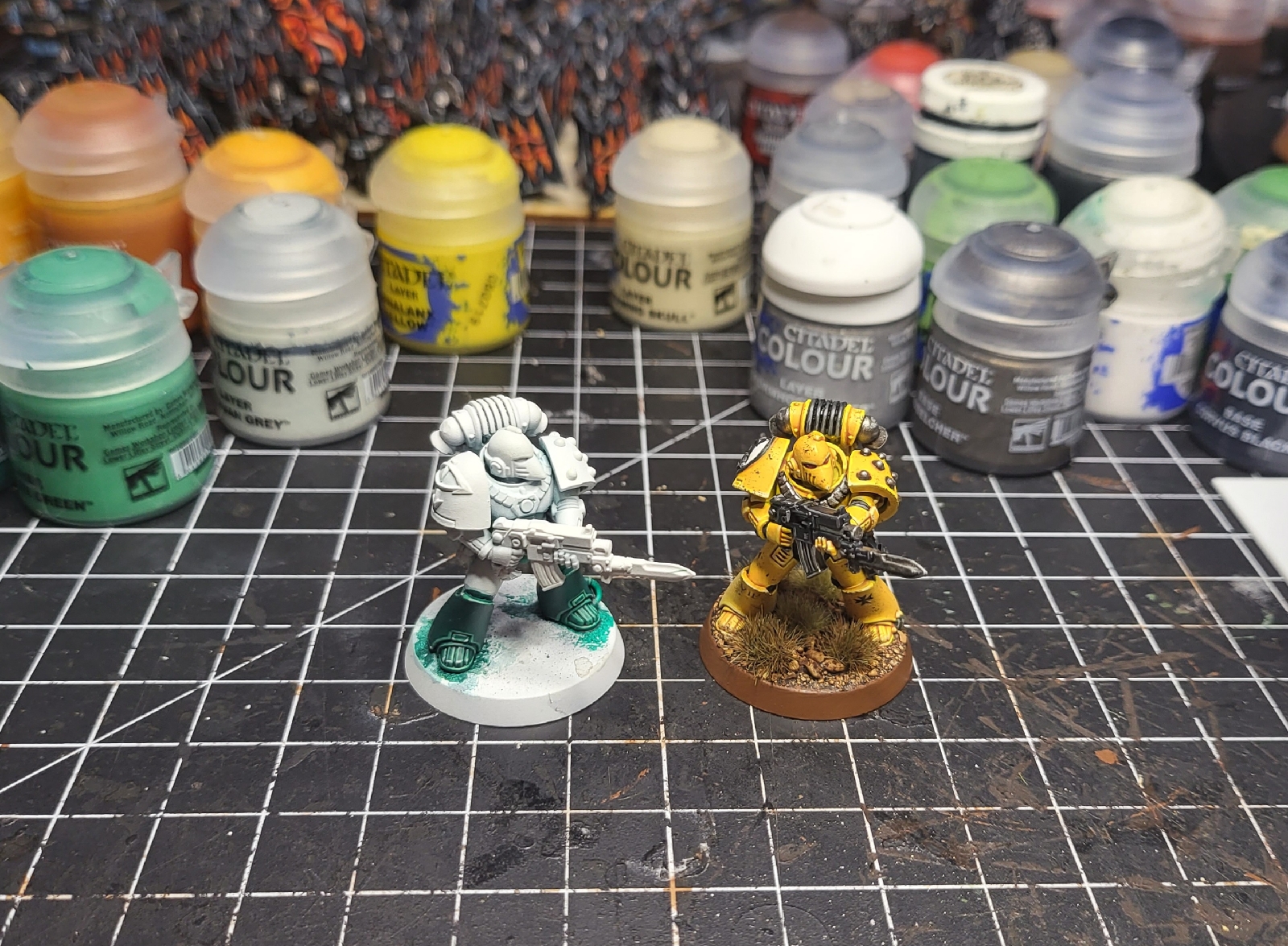 Next up is to finish the first "test" figure for the Sons of Horus.  LOTR continues (in the background of the picture above).
Posted by Jay White at 9:33 PM 6 comments:

War of the Ring: Khand Preview

Just a quick post today.  Some big stuff going on around my hobby room ... but more on that later.  The spectacular Bohdan continues to churn out LOTR stuff.  He has started into my Khand army and sent along some preview pictures of the Khand mercenary infantry ...

Ooohhh, the sun banners!  Tgese guys are going to look great on the tabletop.  In addition to the infantry, the force also consists of cavalry and chariots.
Stay tuned for more stuff coming down the pipe.
Posted by Jay White at 6:09 PM 4 comments:

Games Workshop hosted a dedicated Middle Earth preview stream on thier Twitch channel today.  This has not happened before, or if it has, not for a very long time, so people got hyped up!  For me it started at 6AM!  I woke up at 5:56AM, put on my Bose headset, and fired up my Galaxy Tab to watch.
I have mixed feelings on the previews that came out.  I love Middle Earth in general and love that I can build armies with such great looking miniatures.  That being said, I was left a little disappointed at the end of the stream.  But, let's come back around to that in my final thoughts.
EDIT: Upon further reflection - don't get me wrong, all these new releases are beautiful models.  GW has gone through long periods of completely neglecting LOTR, so anything they are doing is good to see as they are investing in the line.  I think GW failed here is really helping explain some of the logic and reasoning that goes into their decisions.  I can "read into" it and figure out most of it ... but it is always good to provide some insight into these decisions.
That being said, if you are new to LOTR miniatures then this I think should be interesting to you.  Let's take a look at what they covered.
First up is a new starter boxed set, the Battle of Osgiliath. 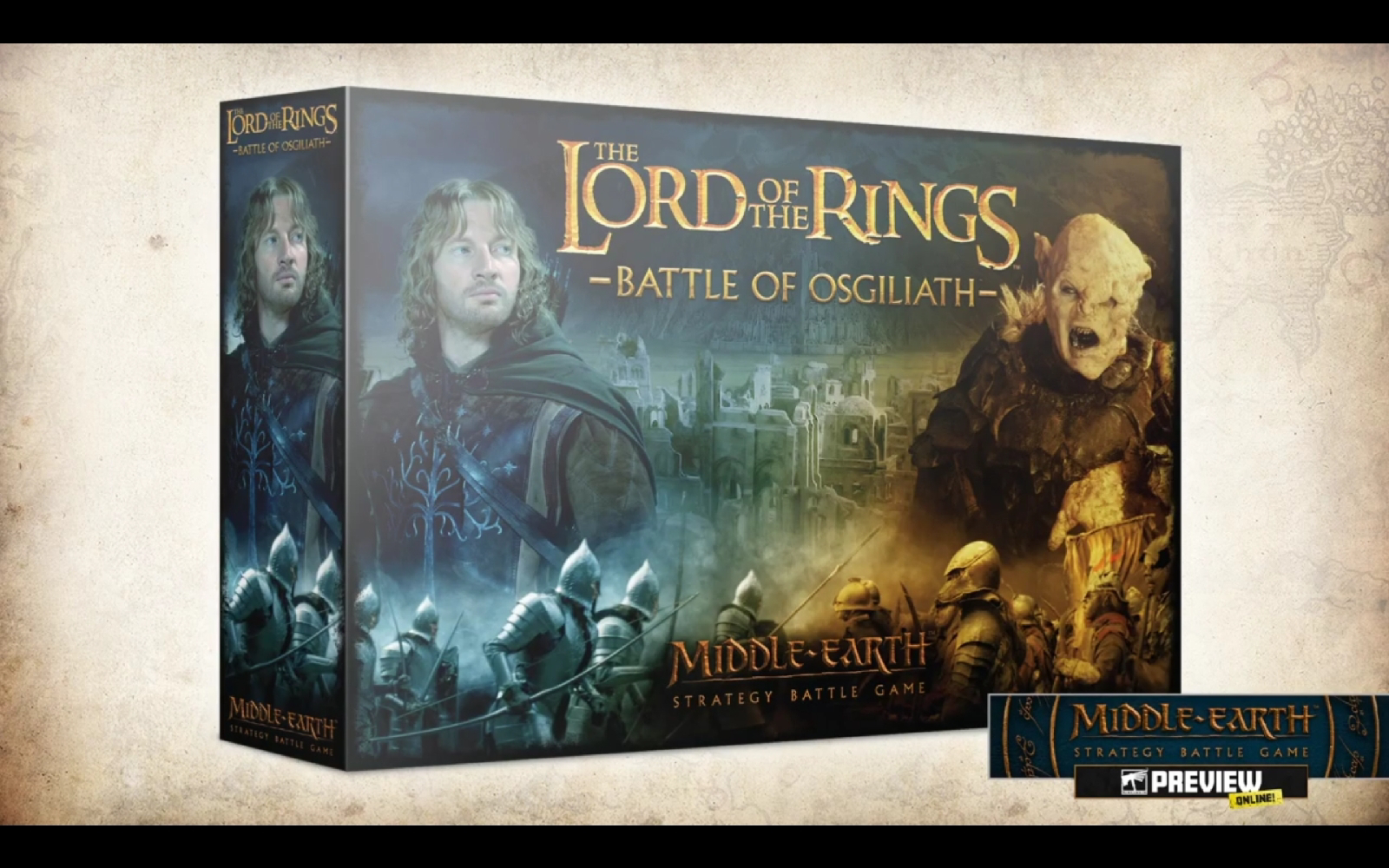 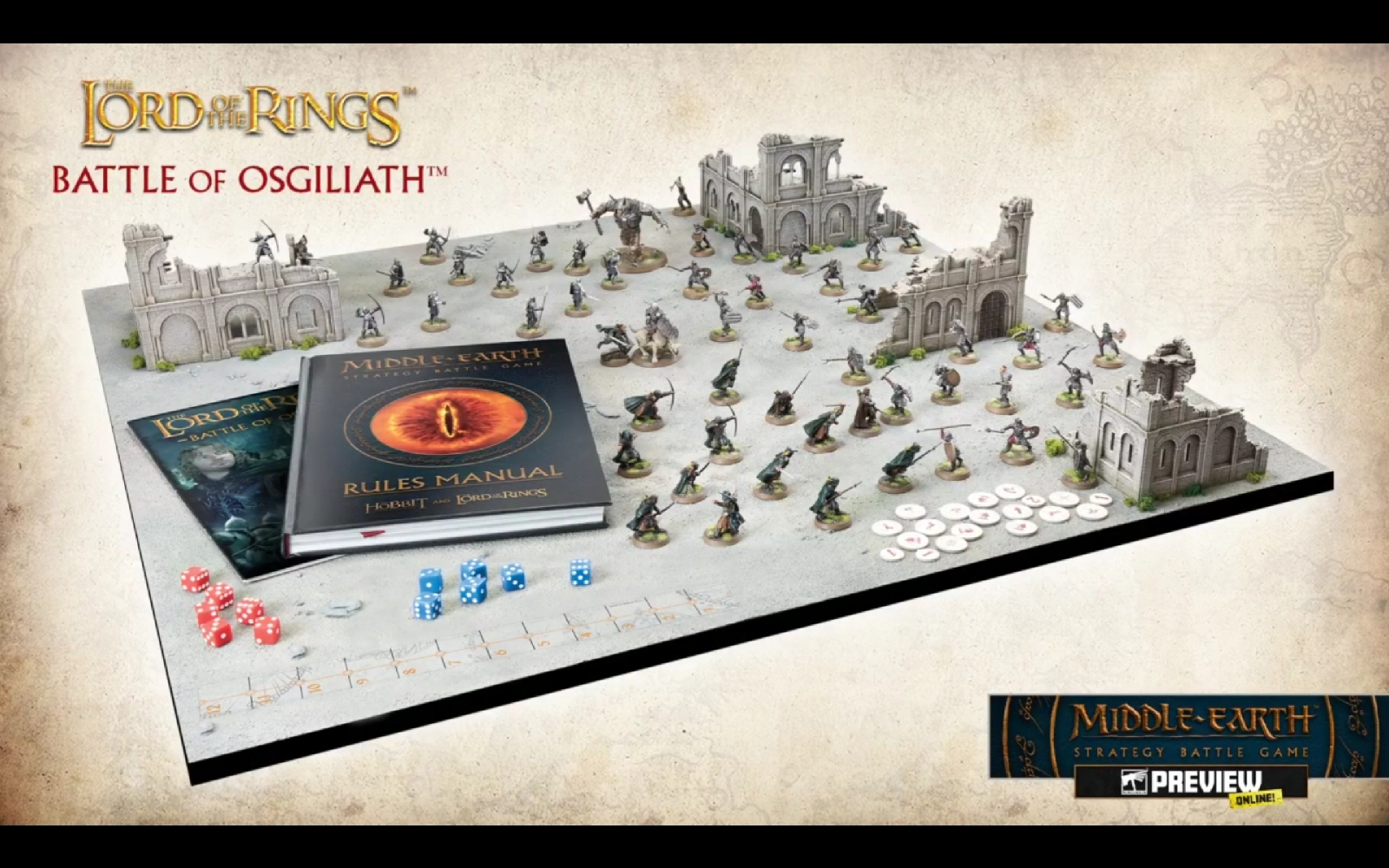 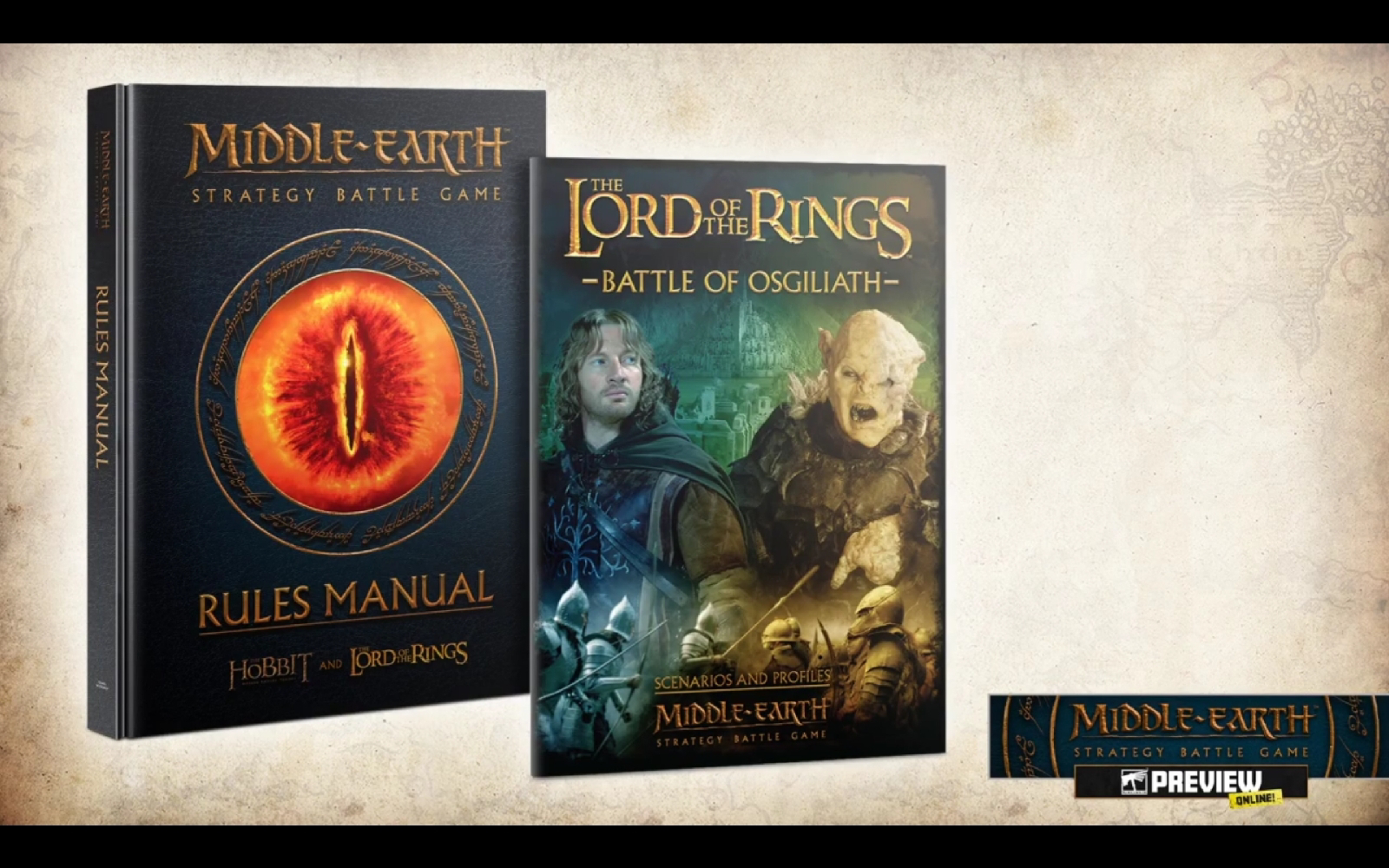 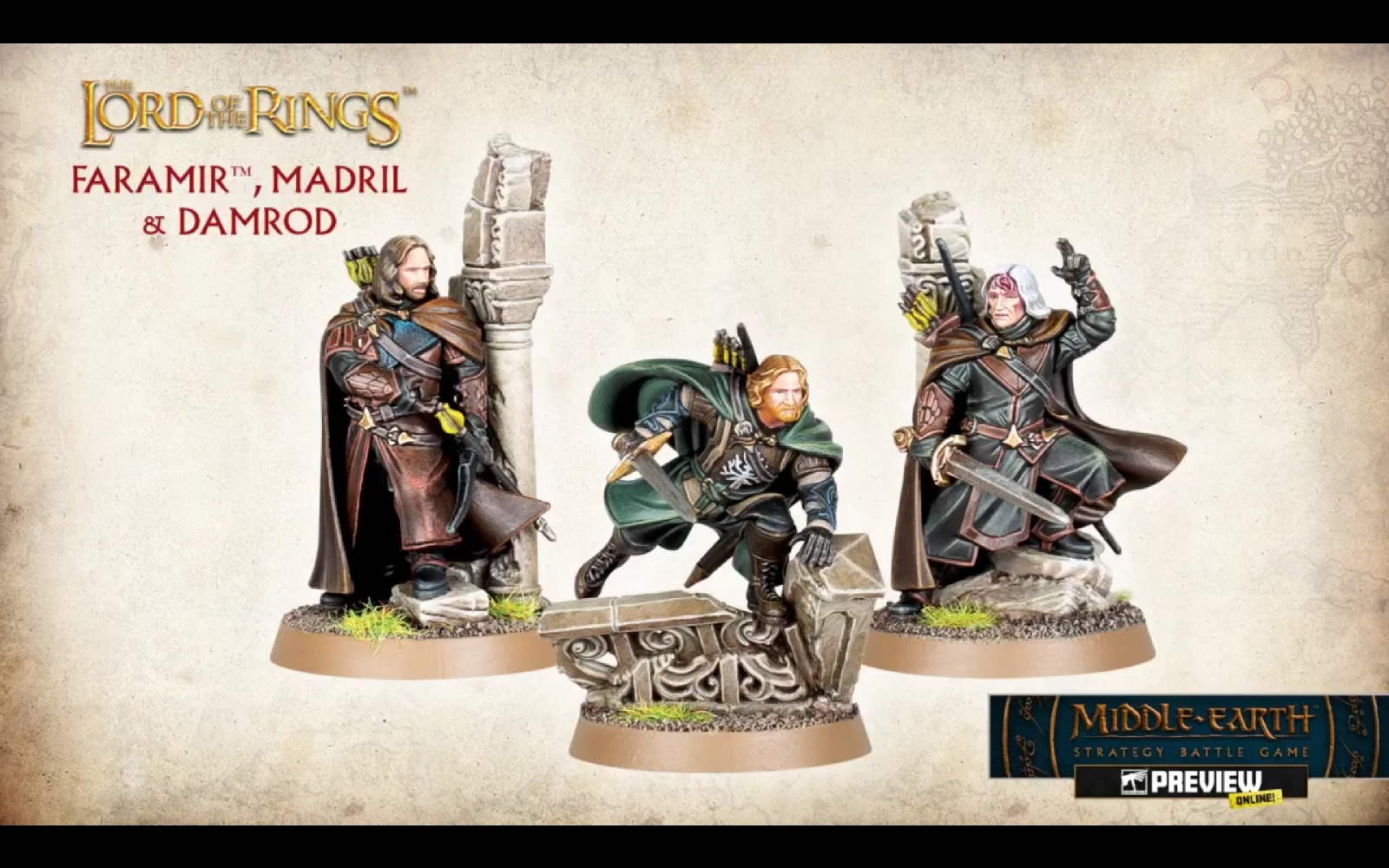 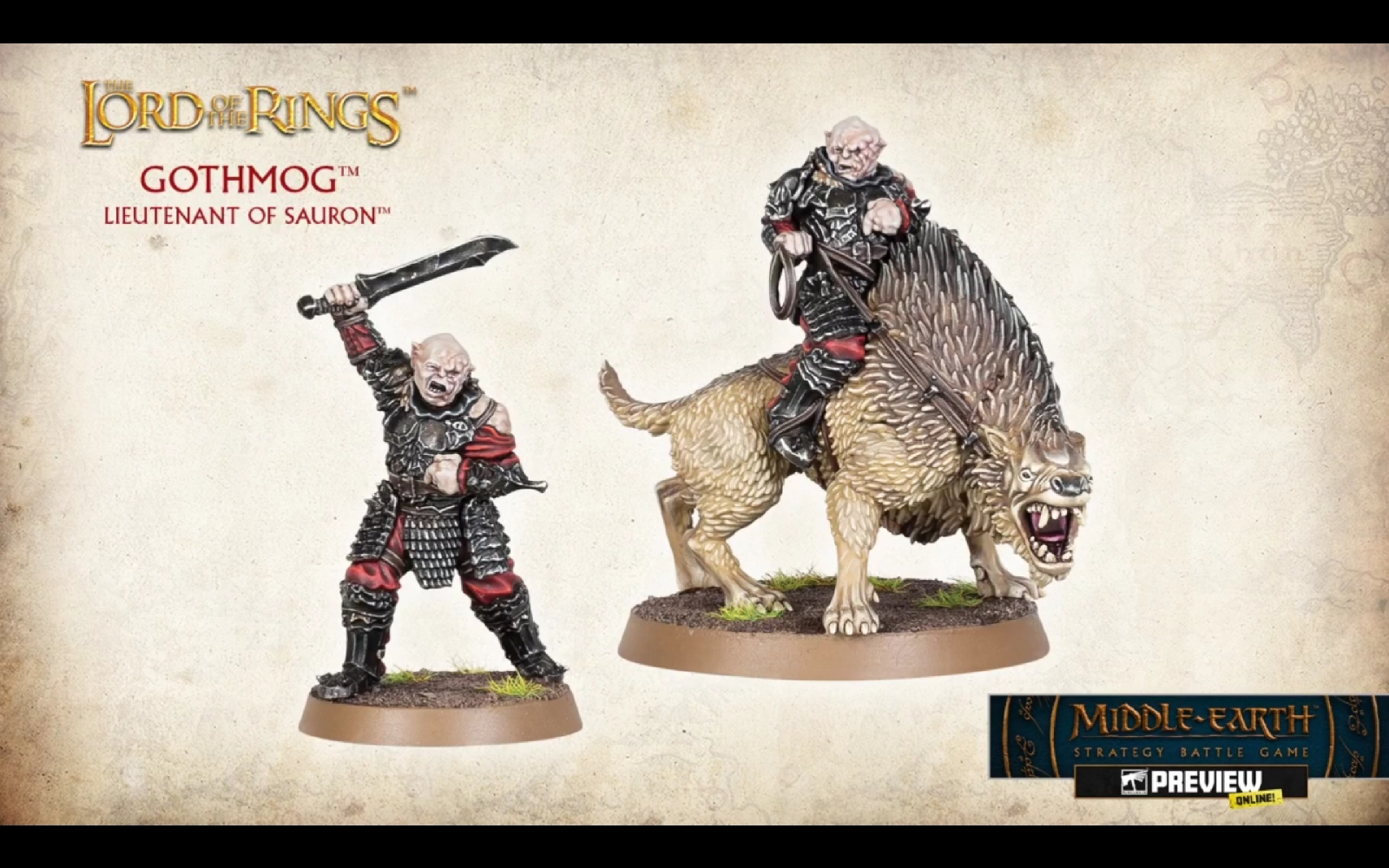 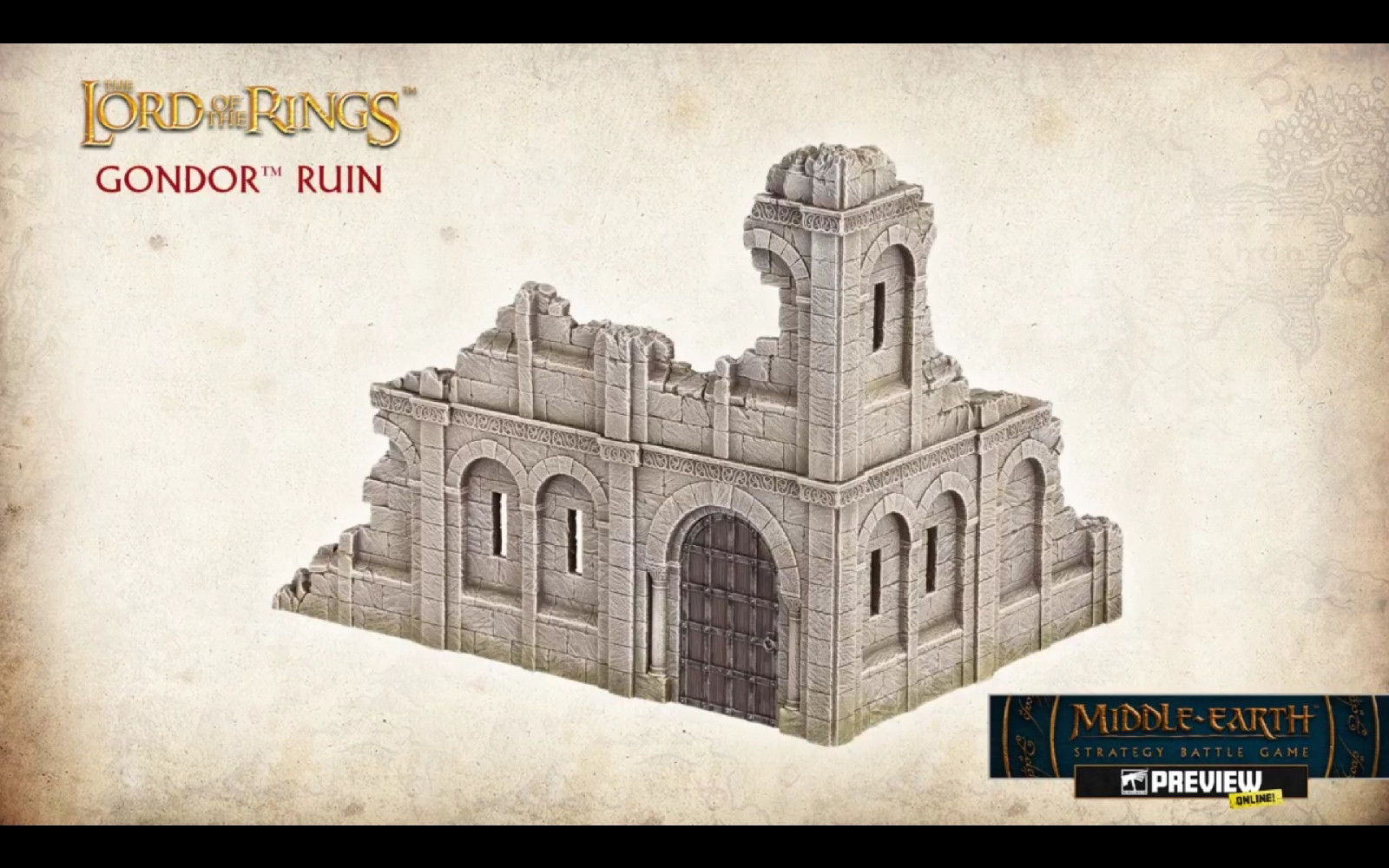 They key takeaways on this:
1.  The core miniatures (the troops) are not new - a mix of Minas Tirith Warriors, Gondor Rangers, and Morannon Orcs.
2. There are new hero miniatures for Faramir, Damrod, Madril, and Gothmog (foot and mounted).  If you get these guys confused, Madril is the Ranger hero with the white hair that gets speared by Gothmog at Osgiliath.  Did we need a new Gothmog model?  No, no we didn't.  Did we need new Madril and Damrod models?  Also no.  The existing versions of these miniatures are both available and great looking ... so this feels just redundant at this point.
3.  If you play MESBG (Middle Earth Strategy Battle Game) then the rulebook that is included, while not new, is updated to included all FAQs/updates since the rules last got updated 4 years ago.
4. There is a new ruins terrain set for Osgiliath.
Next up is a number of new models for the Elves. 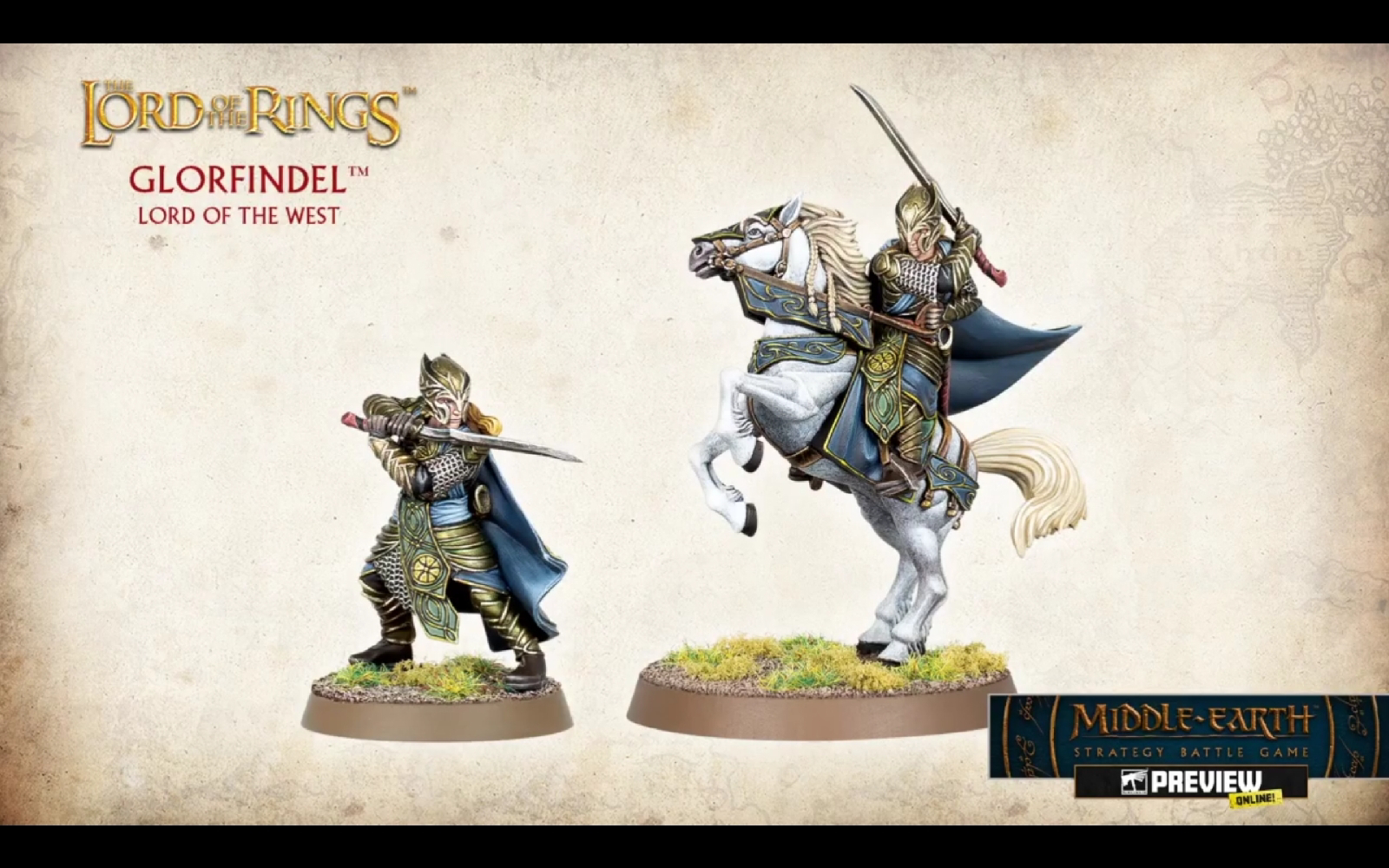 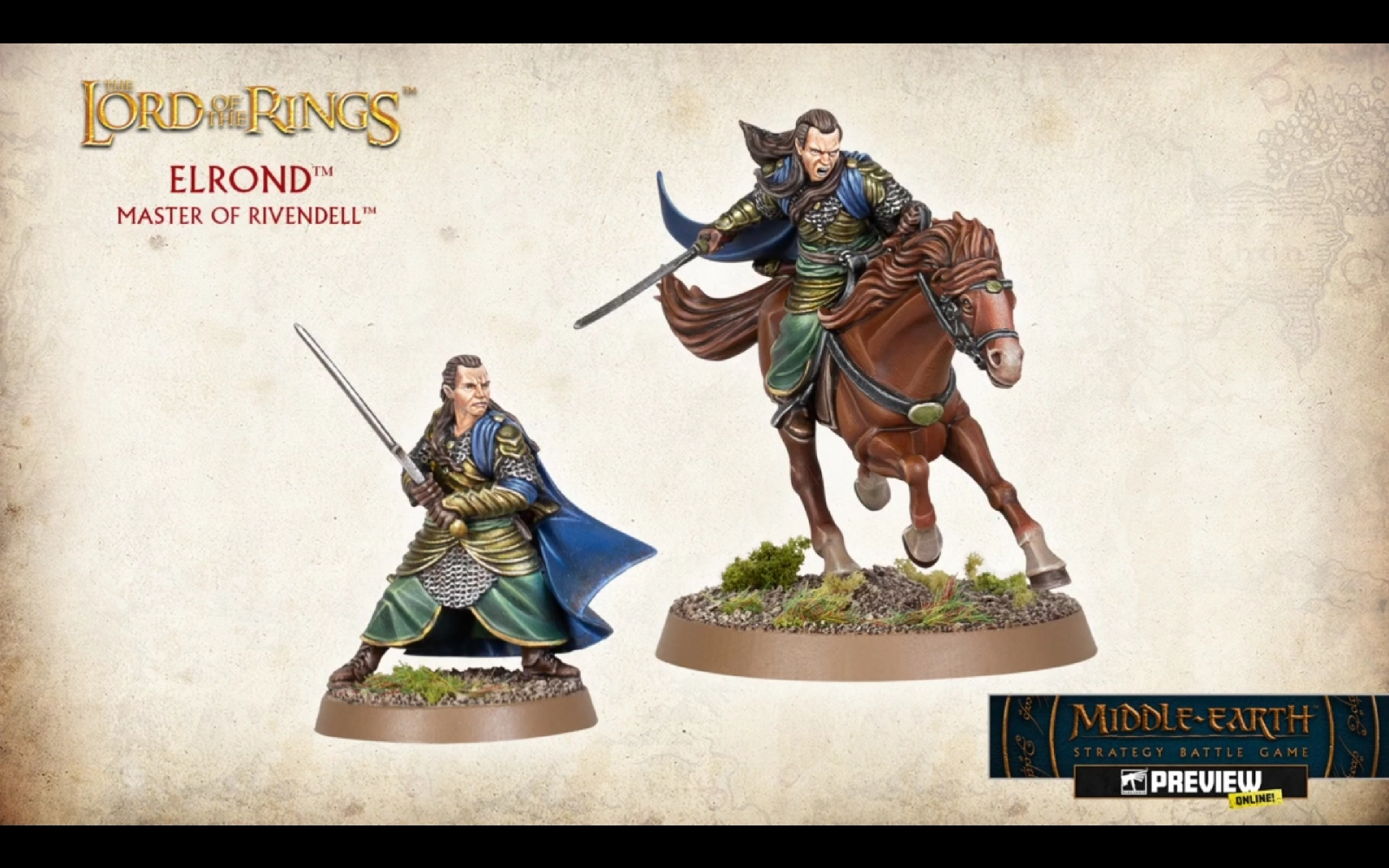 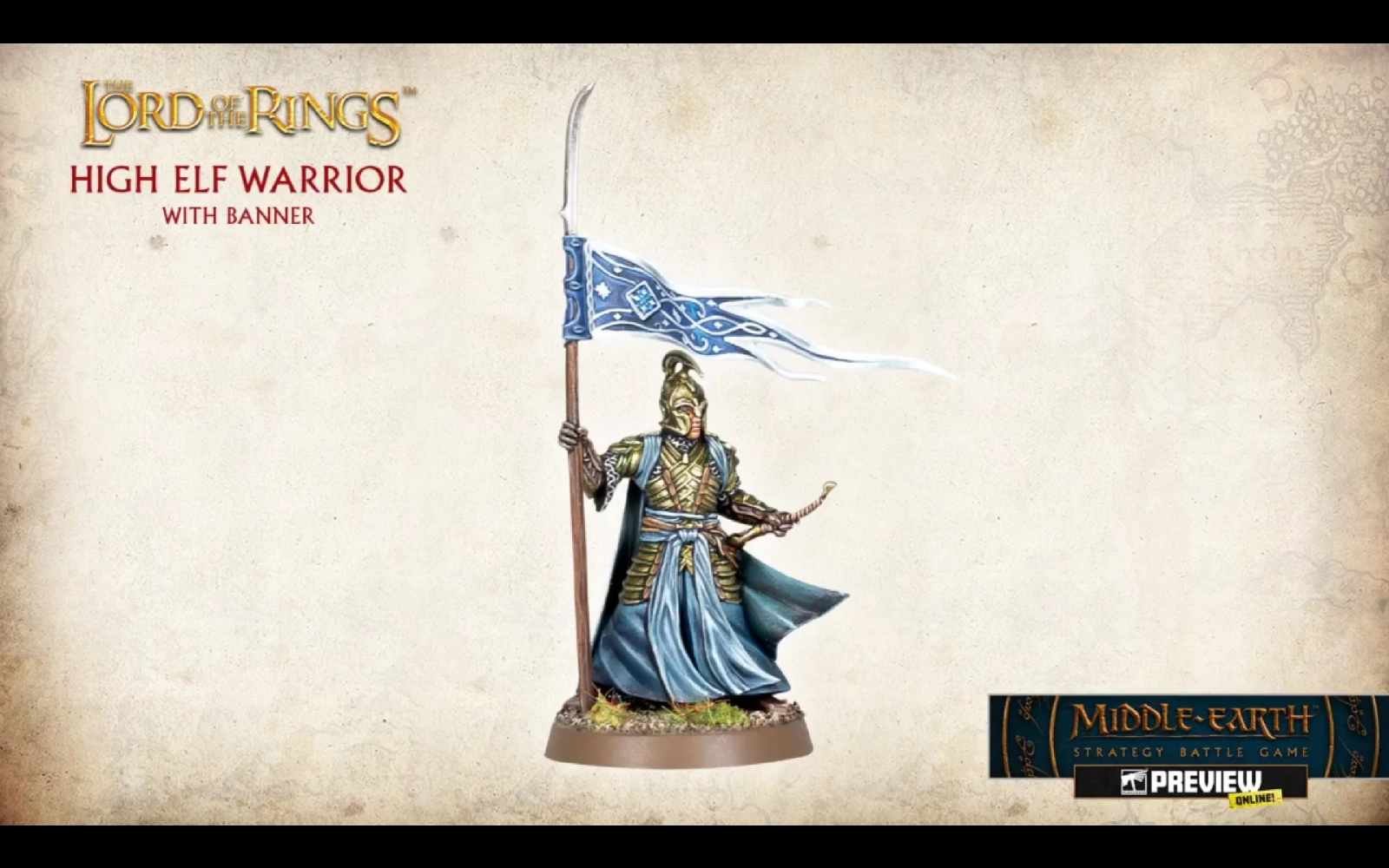 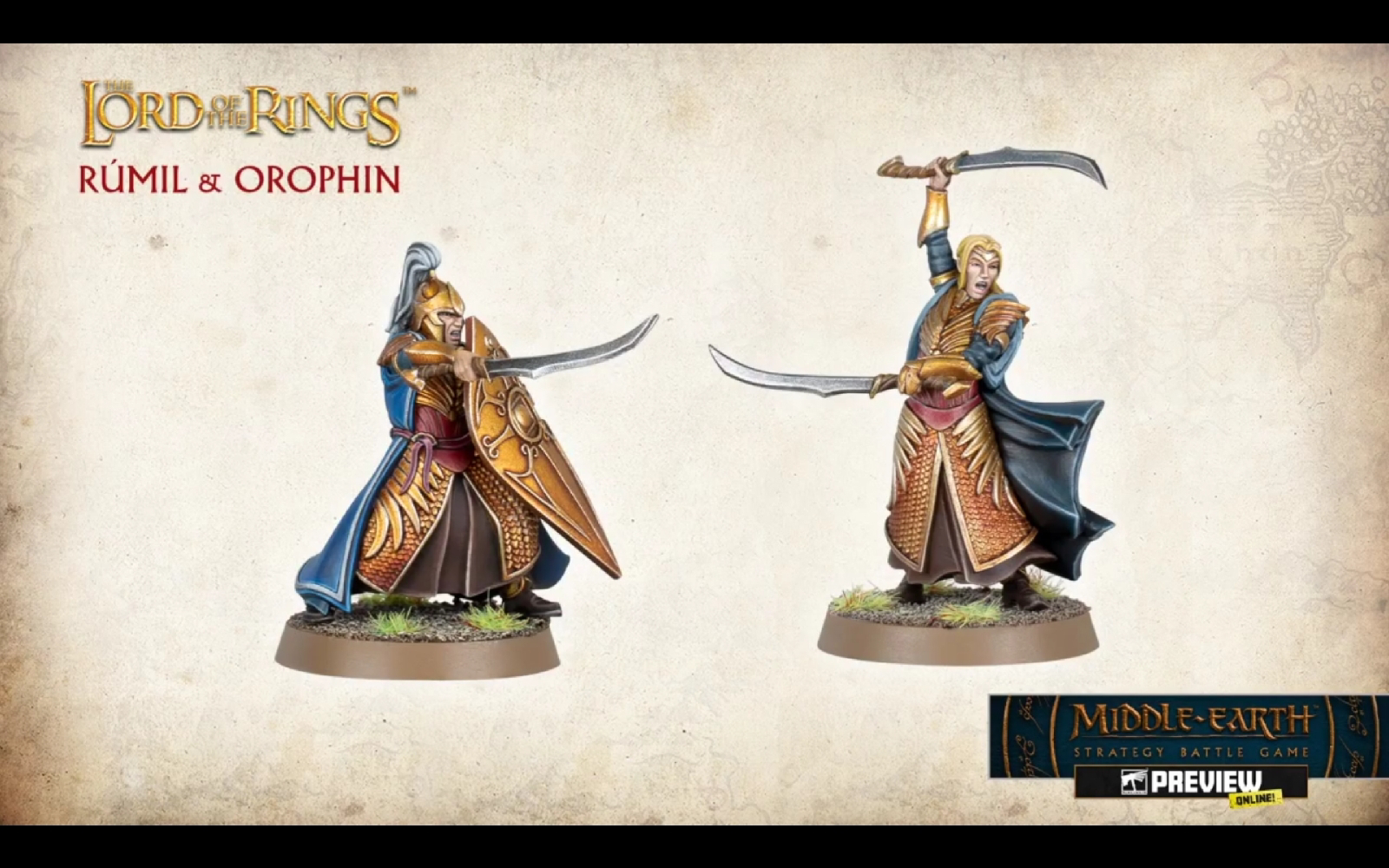 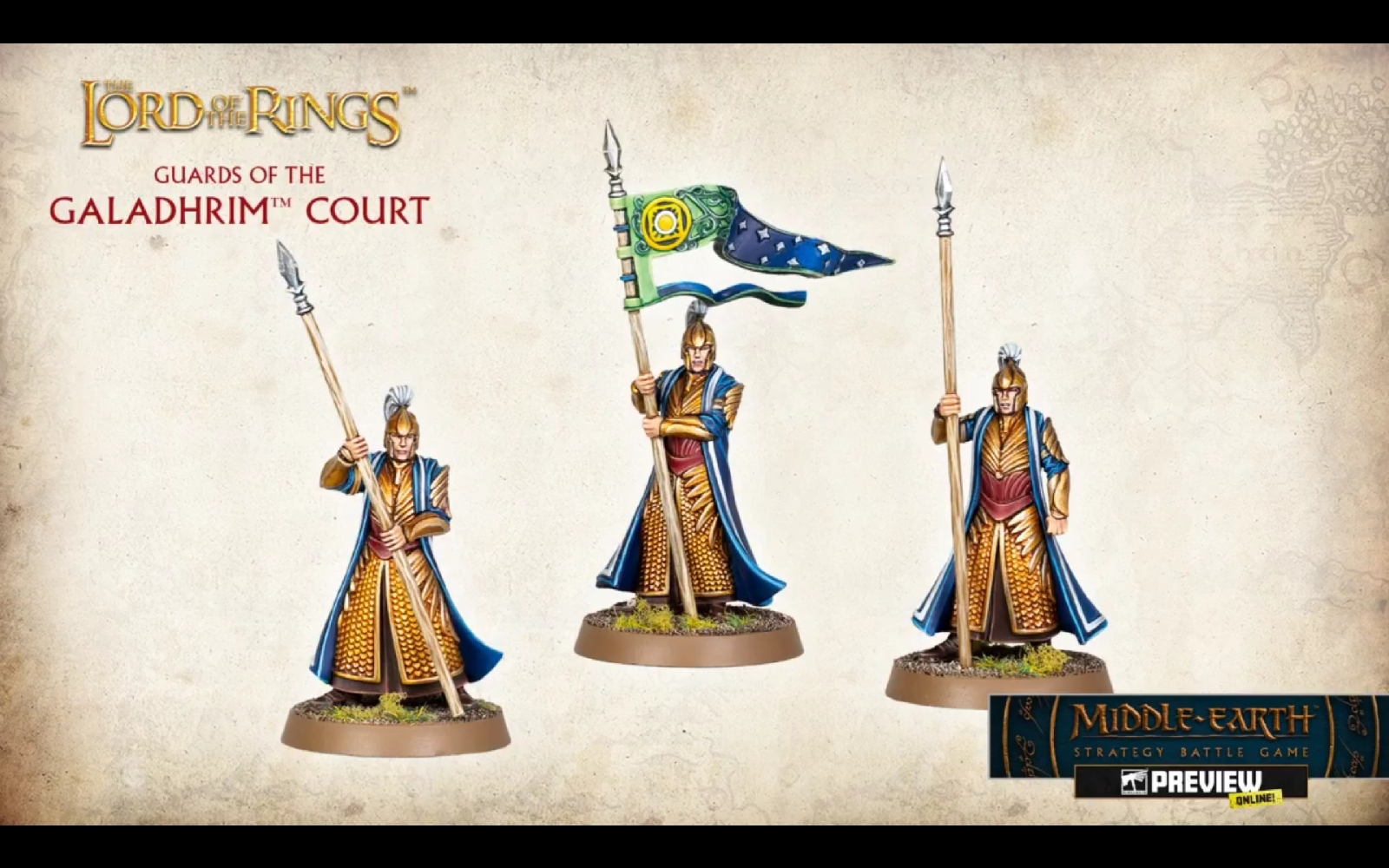 This should make Elf players happy.  Other than a unit of Galadhrim with Haldir (for the movie version of Helm's Deep), I currently don't have any elves, or any plans to get them.  But, I have to admit, both the Elrond and Glorfindel miniatures are very nice.
Finally, they organized some starter battle sets for the main factions. 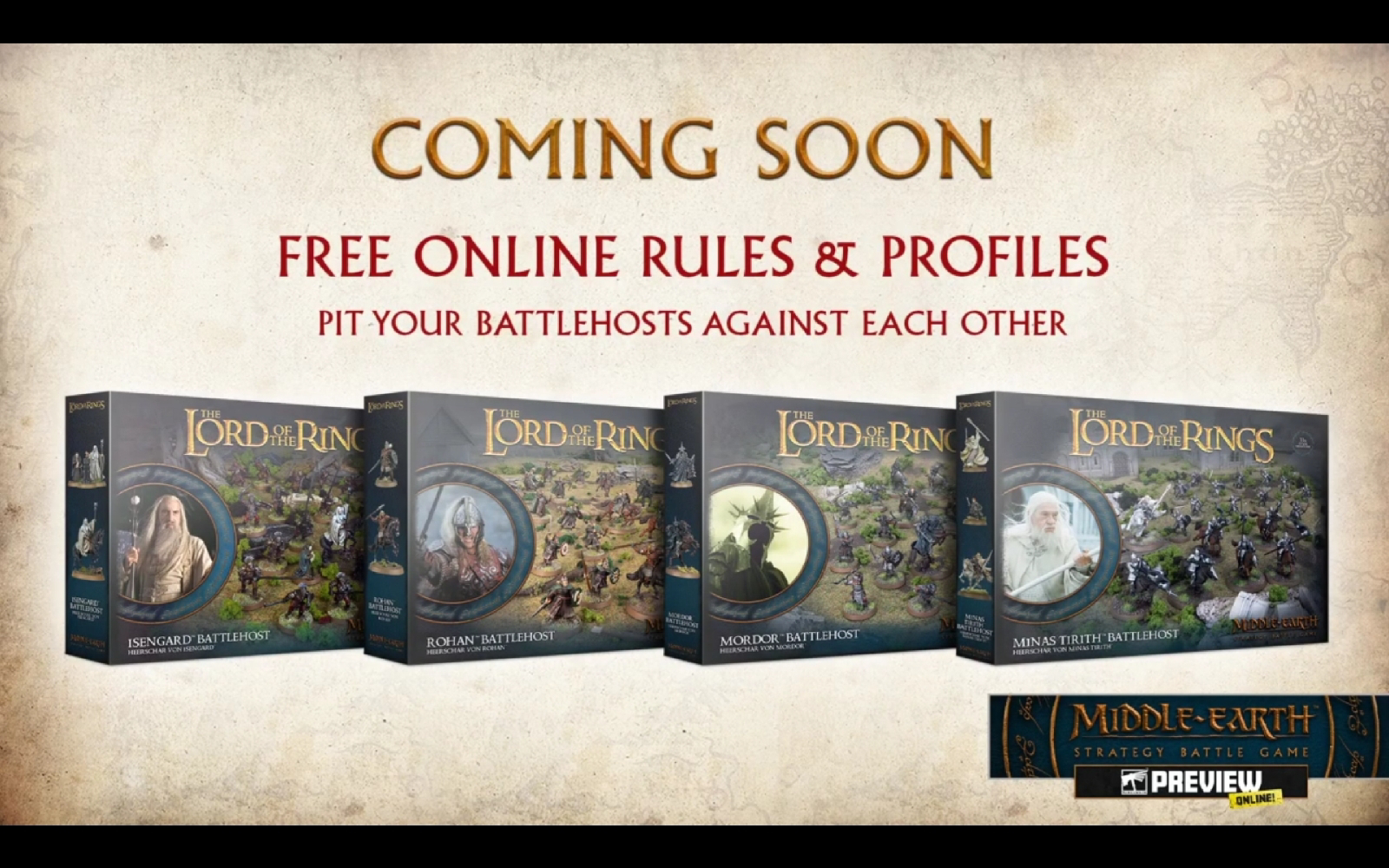 The four sets cover Rohan, Isengard, Gondor, and Mordor.  No new miniatures, these sets contain existing miniatures.  Remains to be seen if these sets will be discounted.  But, this does help new players enter the game.
Ok, that was everything covered.  If you are new to the game or wanting to get into the game, this is all good.  However ....
This range and license has soooo much potential.  I find that GW is focused on two things for MESBG: competitive play (building armies for tournaments) and character models.
This is fine, and makes sense for a skirmish system but ... there are some key things I think they could do that would appeal to the rather dedicated player base.  My list is long, but 3 things off the top of my list are:
1. Close gaps and maintain availability the range.  A perfect example here is the faction dice sets.  We never got a dice set for Gondor but did get dice sets for Rohan, Isengard and mordor ... and for a bunch of characters (Gandalf, Treebeard/Fangorn, etc).  So, do Gondor!  Also, all those dice sets have long sold out and gone away.  When miniatures and accessories disappear it is really annoying and makes for an inconsistent product experience.  Trying to get people excited to play, only to immediately see the things they want be unavailable ... well, let's just say almost every other miniatures company doesn't have this problem (as consistenly and prolifically).
2.  Bring back War of the Ring.  It could use an update, but they could get away without updating it.  This could be the gateway to getting some new core troop sets ... the existing troops, which make up the majority of any force in the game (skirmish or mass battle) are very old.
3. Historical (to Middle Earth) scenarios and linked campaigns.  The original War of the Ring rulebook did some of this - the Fords of Isen being a great example.  So many other game sysems out there do amazing linked campaigns or campaign books.  The major battles are well known, but there are so many lesser known battles and because it is a fantasy setting, several made up (but related to events) scenarios they could make.  This would be great for motivating an existing player base to expand.
Ok, there you have it.  Perhaps the whole thing was a little over hyped leading up to it.  There is good stuff here but I think so many are looking for GW to make some big moves here to promote the system ahead of the next wave of movie/TV series motivated players.
Posted by Jay White at 1:47 PM 10 comments:

Minas Tirith (And A Thought)

After a lot of consideration - I've decided to give a go at building Minas Tirith using a foam modelling approach.  I plan to follow the approach laid out by the crazy man of the famous Zorpazorp.  If you are unfamiliar with Zorpazorp you may not follow Middle Earth/Lord of the Rings stuff ... or perhaps you've been hiding under a rock for many years ...

I highly recommend his YouTube channel ... he does a LOT of LOTR stuff and also has a lot of Warhammer 40k content - which, even if you are not into, is actually very entertaining because he builds absolutely massive terrain and hidden within his videos are some excellent terrain tips, tricks, guides, etc.

Specially to what I'm doing ... there are three videos that explain it all ... 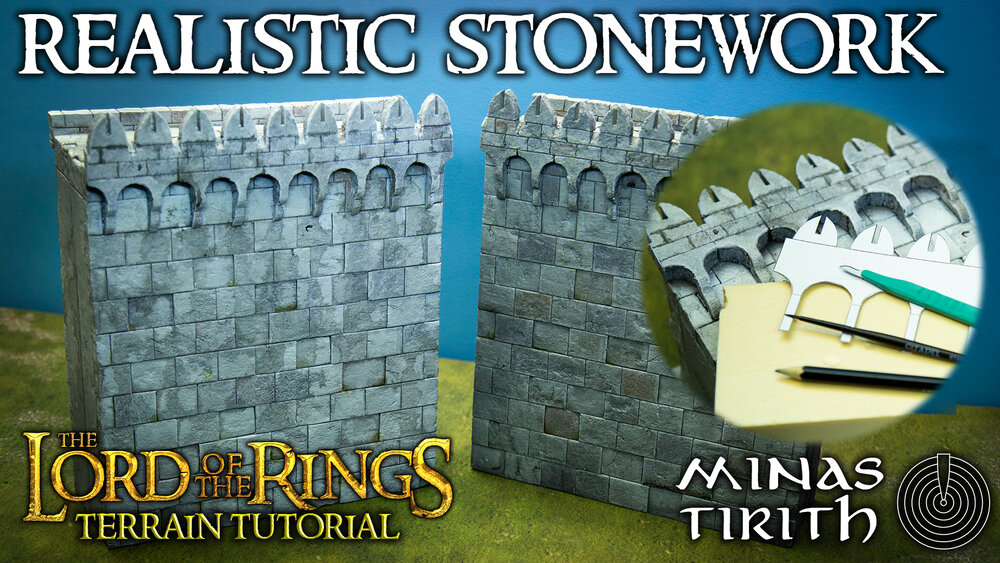 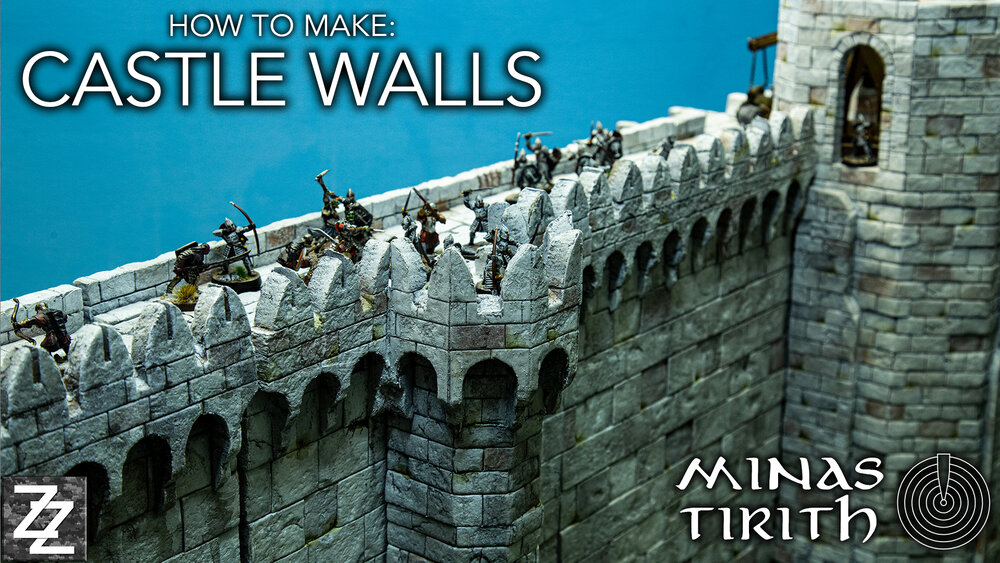 And finally the third version of the walls: https://youtu.be/k30HdMAYOTc 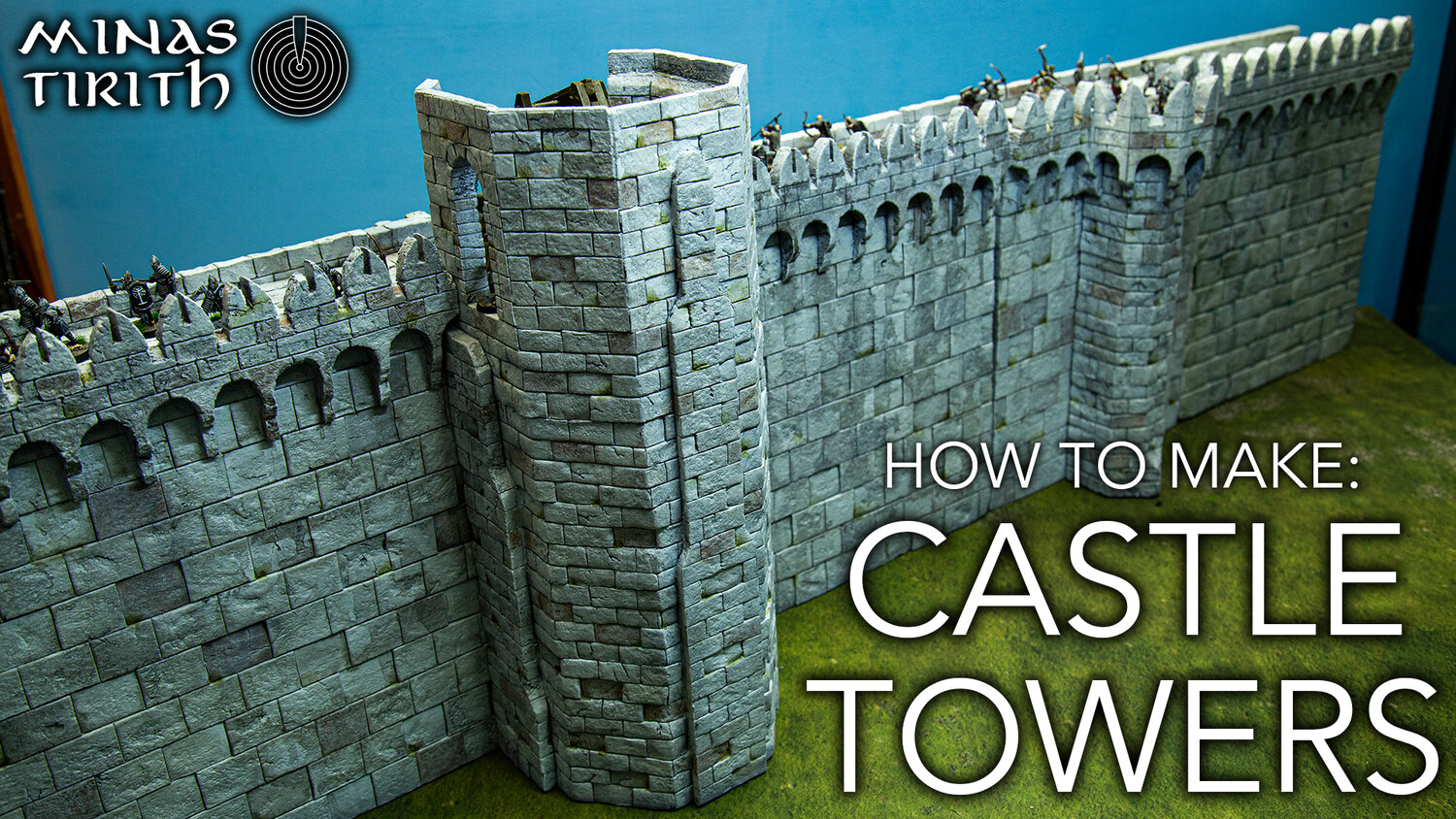 The only challenge I have is that he has not done the main gate - BUT - I've already got this mostly designed and worked out at this point so will just do my own templates/build of it using the same methods.

I really can't stress enough that even if you are not into LOTR I still highly recommend watching these videos as they really in a very clear way show you how to do foam terrain - from start to finished product --- and it doesn't require advanced skills, this is something anyone can do with just a little effort.

Finally, I have lots going on as usual.  I've been thinking of doing a "hobby talk" series of posts that go over a little of my wargaming history, thoughts, inspirations, plans, tips, tricks, favorite products, and more --- if you think you would find this interesting please leave me a comment below (not that anyone really gives a poop about this).  I may do this regardless, just to document my thoughts and so I can remember things when I get (even) older ...

For example, some recent inspiration I've had is to look at finishing my Necromunda terrain after seeing to great layouts ... 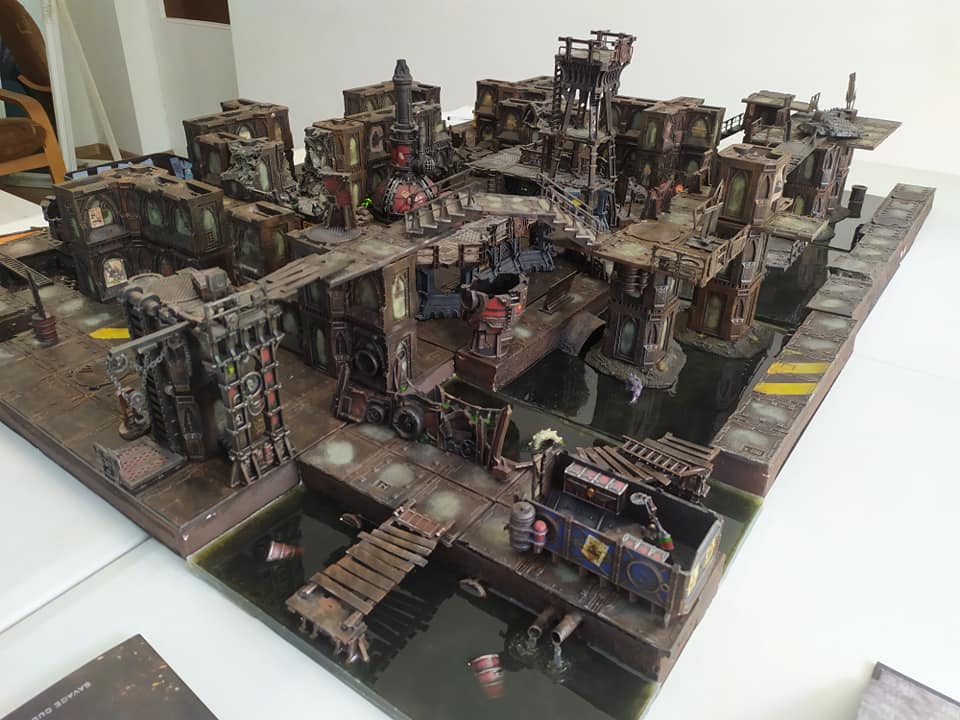 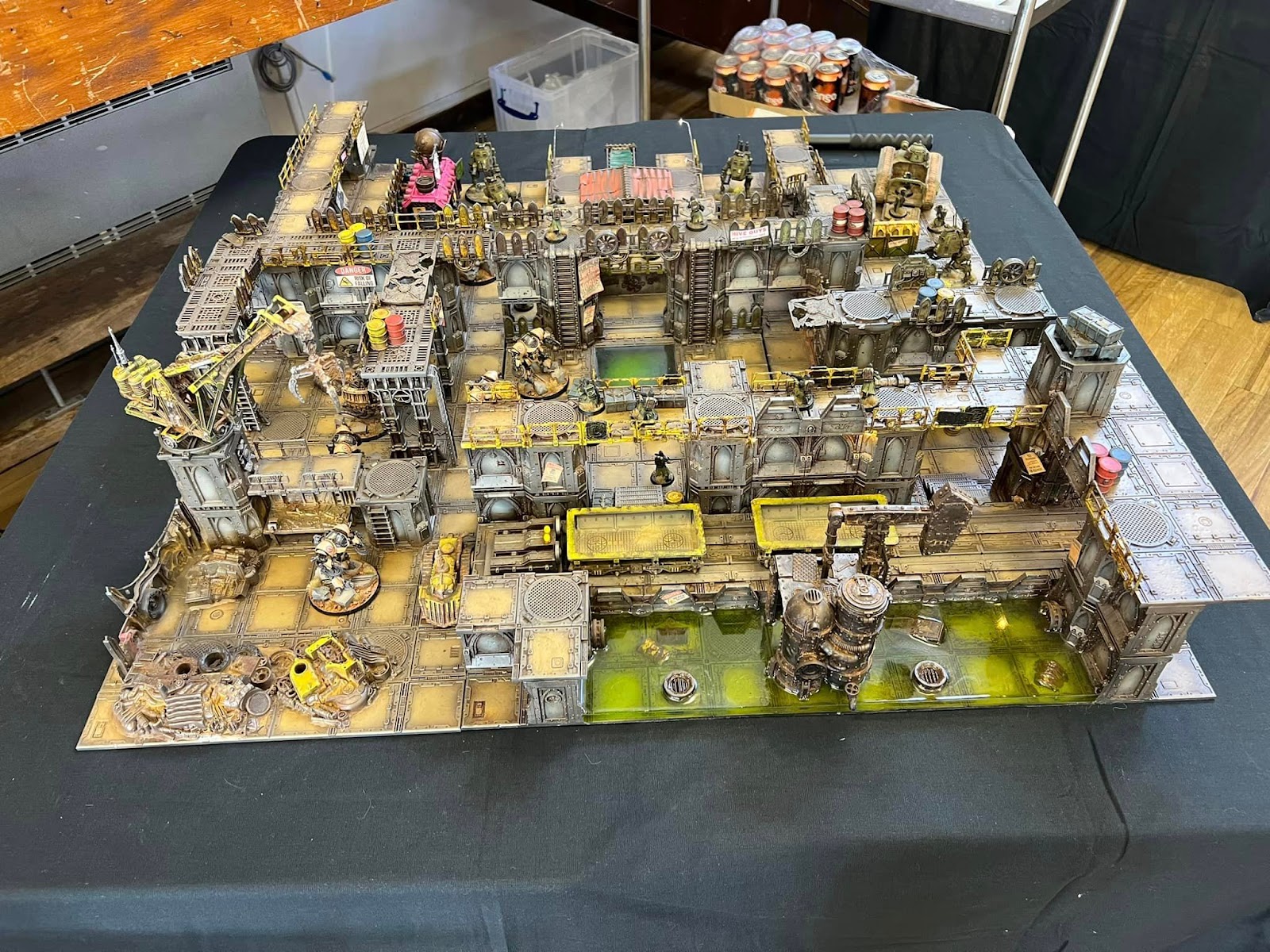 While GW stuff is expensive, you really can't argue with the results.
Posted by Jay White at 11:26 PM 8 comments: