Well ... there is always something more you can do, so complete so as far as my original objectives of having the town, accessories, and initial two gangs completed.  I will be painting up the remaining two gangs as a priority to round thing out nicely.

All the building basing completed today with the most excellent help of my friends Roy Scaife and John Lantz who put the majority of the base coat of paint down on the sand so that all I needed to do was dry-brush the highlight and tuff them (using Highland tuffs from Army Painter).

I've also finished painting a wagon for the town (from 4Ground).  Below you can see pictures of the completed table, with accessories, and the two gangs out for a bit of a shoot'em up. 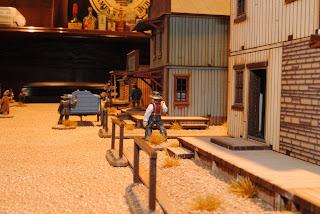 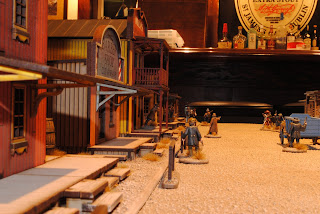 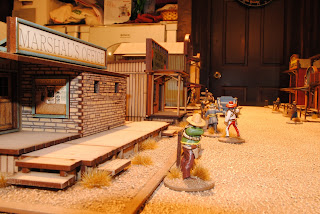 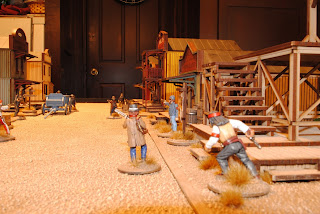 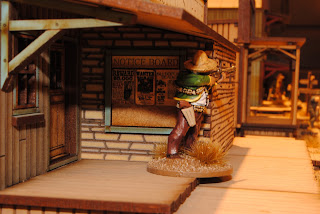 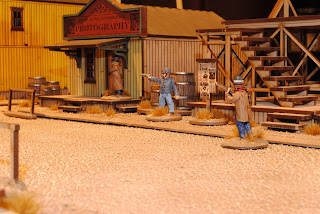 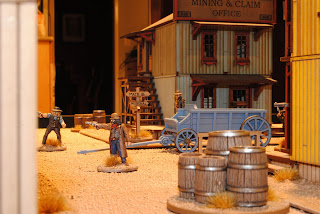 Pictures below ... a bit washed out because of the flash, but it gives you the general idea of the overall table. 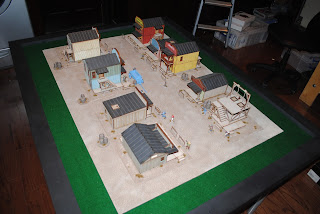 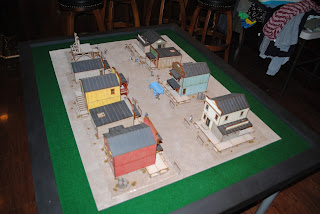 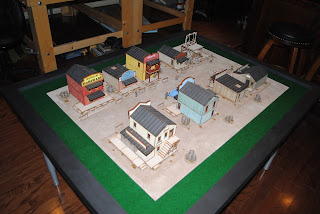 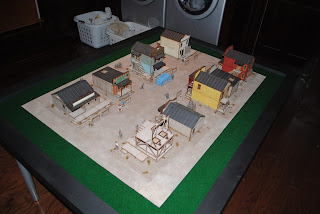 Dead Man's Hand Project - Update #7: The End Is Nigh

Things are coming along on schedule for completion for CelestiCon (August 30 - September 2).  Today I finished up the town accessories - barrels, horse hitches, watering troffs, and some signage.  The barrels are from Micro Art Studio (resin) and come in three different sizes  They are unpainted so I spent some time getting some paint on them - then based them up on some 50mm round 2mm thick  MDF.

4Ground does the horse hitches, signs, and watering troffs.  Given the time I've been spending painting up the gangs and working on the town accessories, Roy Scaife has been working away at getting the last three buildings based on MDF and sanded.  I hoping that most, if not all of this is done tomorrow.  If that happens I can start in on the additional gangs.

Pictures below of the progress and completed town accessories.

I just finished painting and basing my second gang for Dead Man's Hand - the Desperado's.  I generally use all Foundry paints since I love the three colour system - and this project has let me dip into some of the new paint set that I've had for a while.  I need to paint up a bunch of barrels before I start into the final two gangs (the Cowboys and Outlaws).  So far so good - I think I'll be able to finish everything I need for CelestiCon.

Now that I have some games under my belt of Dead Man's Hand I feel good enough to write a review of the game.  I didn't post pictures of the games so far since I have not finished up the painting of the gangs just yet (the Desperado's are nearing completion). 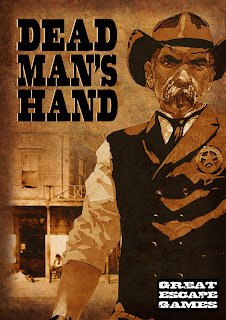 After reading the article on the game in Wargames Illustrated that goes through a game of DMH I was sold on picking up the rules.  I had been eyeballing doing an Old West game before but there was really just Legends of the Old West by Warhammer Historical ... and well, I'm done with Games Workshop in many ways and not a particular fan of the rules system for many reasons.  So I went big into DMH, since the cost of entry is not that much for me.

So this brings me to the first set of good things about DMH:
Being a lover of Muskets & Tomahawks I've really come to love the cinematic style of rules being released these days.  DMH really delivers on a old west experience that you grew up watching in Clint Eastwood movies and the likes.  Crashing through windows and having a proper go at it ... just lots of fun (the game is enhanced with sound effects).  The "scene" approach to providing a mini-linked set of scenarios for each game is brilliant (of course, each scene can be played as a stand alone game).

Everything is driven by the deck of cards - which I think is a real innovation (not card driven mechanics, but the dual use of each card for activation or special rules).  Each player has either the red cards (hearts and diamonds), or black cards (spades and clubs).  The first 10 cards are the same for each suite, with the J-K being gang specific (you only use them if you are using that specific gang).  The turn starts with each player flipping the top card of their (well shuffled) deck up.  The higher card determines who has initiative (drawing a second card if tied).  That card gets assigned to one of your gang members.  Then each gang member gets a face down card.  When everyone has a card you flip them all up and resolve them from highest card to lowest.  Each player also starts with a hand of cards.  Every card has a number value (used for resolving the turn order) and special rules.  The cards in your hand are used for their special rules (which normally either help you during one of your activations, or interrupts your opponent by providing him some disadvantage to his actions).  Each model gets three actions (move, shoot, recover, etc.).  When all models have activated and completed their actions the turn is done.  Rinse and repeat (reshuffling the discard pile when necessary to replenish your deck).

That is the core of the system right there.  No fiddling around with who stepped on a tac when scratching their arse in the 2pm sun while facing east and sneezing ... you get the drift.

I have to say the models from their gangs are also very nice.  Clean, well sculpted and easy to paint.  They support the game with download of building signage, reference sheets, and additional "scenes" you can use to play once you've exhausted those included with the book.


It is fun, fast paced and easy to pickup quickly.  With low cost of entry and stunning terrain how can you pass this by?
Posted by Jay White at 10:43 PM 9 comments:

I have the first gang completed for Dead Man's Hand - the Lawmen.  The buildings are coming along steadily- the bases are sanded and I'm in the process of painting and drybushing.  I spent most of last night and today finishing the Lawmen.  Next up are the Desperado's.  Pictures below of the gang.


I'm still on track for CelestiCon ... I plan to have at least two of the gangs painted ... with a stretch goal of getting all four painted and done (provided I finish the other odds and ends I need to do).
Posted by Jay White at 5:54 PM 12 comments:

With my Dead Man's Hand and Muskets and Tomahawks projects coming to completion by the end of this month (in preparation for CelestiCon), I have been carefully planning my next big project.

As I arrived home with my wife from seeing the movie Elysium this evening I was greeted by a large package on my doorstep.  When I saw the pictures from Salute 2013 I was inspired by a single image that was taken of the demo table at the 4Ground booth ...


Now who the hell would be crazy enough to do this kind of setup in 28mm ... right?  Well internet ... I'll take a crack at that insanity.  Ok, so maybe not as many buildings that are shown above, but my goal is an equally impressive terrain layout for my Bolt Action games in 28mm.  I've been collecting buildings from almost all the collections available in 28mm from 4Ground over the year ... but this project required a new level of damage to my bank account to get underway.  So off to the 4Ground website I went and after ordering a couple of outstanding kits for my Old West town, I engaged heavily into ordering from the 28mm "World at War" and "From Whitechapel to Baker Street" collections.

The box is large ... I added a Flames of War spray paint can to demonstrate the size of the box below.


I'm not sure a picture can do the box justice ... but it is massive!


It damn near brought a tear to my eye when I opened the box ... one of the best gamer shopping moments of my entire life!  I've coined a new phrase ... when one orders a butt load of 4Ground products the resulting feeling is called a 4Gasim!  Add that to your urban dictionary internet!


I laid it all out to take it in ... I've got a lot of assembling to do ... which I actually find kind of therapeutic.  I've already been working my way through several buildings that I already owned.


So stay tuned ... with the final kits I needed for my Old West town in I can wrap that up and get to work on building more buildings.  Stay tuned ... I have a lot more to come on this front!

The march towards CelestiCon continues.  I managed to get my British artillery crews based up over the weekend and I have the fort guns and remaining French siege guns about 1/2 done on the painting bench. I think this game will turn out to look very nice when it is finally put out for the convention.  I'll certainly be taking many pictures of the game at the convention along with a full report of the action.

Pictures of the crews below.

I'm waiting on an order from 4Ground to wrap up my Old West buildings ... and my DMH gangs should be finished soon so I'll post pictures when I have those based up.
Posted by Jay White at 3:41 PM 2 comments: