I've put together my Muskets & Tomahawks scenario I'll be play testing later this week.  The scenario is called Raid On Fort William Henry and takes place during May of 1757.  In this scenario a strong force of French, Indians and Canadian launch a raid against British work parties in area of Fort William Henry in order to disrupt operations in the area ahead of the planned August siege. 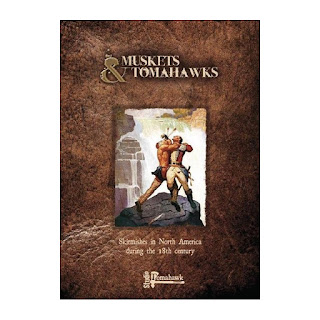 It has been a while since I pulled out my custom built Fort William Henry.  If you are new to the blog or don't recall that project, you can see a picture of the model below ...


If you want to follow the string of posts I did while building that model you can start here then use the blog archive to follow the subsequent posts (all done through September and October of 2012).

Anyways, on to the scenario ...

In preparation for the planned siege of Fort William Henry in August of 1757, French forces have been directed to disrupt operations in the area of the fort.  Special emphasis has been placed on the capture of prisoners that can be interrogated for intelligence.


The table used for this scenario is 6' x 8' and represents the area around Fort William Henry.  The immediate area around the fort has been cleared of trees and vegetation.  There is an encampment located opposite the fort.  The road to Fort Edward exits the left table edge.  French raiding parties enter at #1 (one each) while the French regulars force enters at #2.  British work parties (3) are located at #5.  British regulars are located at #3 (Highlanders) and #4.  See the map below.


Objective:  Kill or capture as many workers as possible before retiring from the field.

Sub Plot:  Don't roll for your sub plot.  Randomly determine which Indian Chief has a grudge against the Rangers.  That Indian Chief must kill either one of the Ranger unit leaders in melee.

Safety - Work parties are considered safe once they enter the fort or pass the boundary of the encampment.

Capture - To capture workers they must be defeated in close combat.  Once captured, prisoners move along with the unit that has captured them, at that unit's rate of speed -1".  Prisoners cannot be recaptured, instead if the unit that has captured them is removed from play (melee or shooting) the unit is considered to have used their last efforts to execute the prisoners and they are removed from play along with the unit.  Any shooting at the unit must be randomized between the unit and prisoners.  For each shooting hit, roll 1D6.  On a result of 1-2 a prisoner is hit instead of the enemy unit.

Okay, I think that about does it.  I'm going to be play testing this game on Thursday so look forward to seeing a battle report and scenario updates/thoughts after that game.
Posted by Jay White at 1:34 PM