Ok, getting back into the swing of things ... with a game!  I've been doing spring wargame cleaning ... a massive task that involves my shed and my cupboards in the garage.  I've managed to free up a ton of space and I've identified a large pile of stuff that I need to sell off.  I still have to go through all my board games ... of which I have far too many!  Anyways ...

Ahoy matey!  It has been a while since the 1/300 galleys made there way into the light of day so I decided to host a game yesterday (I've been off work this last week - mostly cleaning).  Dan Kerrick, Roy Scaife and Adrian Turner joined me for some fun naval action in the renaissance.

The Venetians and allies had four commands:

The Turkish fleet had three commands:

Although the Turkish fleet has the numbers, the Venetian fleet has much more firepower and a great number of larger ships.

I played the Turkish side with Adrian while Dan and Roy took the Venetians and allies.  Adrian and I opted for a straight line of battle, with our right side being a holding action against two enemy commands (one Venetian and the Knights of Malta).  The Knights of Malta are tough so we just wanted to keep them busy enough while we push on the left and in the center.

Another priority was the two Venetian Galleass.  They are very nasty.  12 hit points (a Galiot has 3, Galley 6, and Lanterna 9) and cannons reload on a 4+ instead of the normal 5+ with the ability to shoot from the port/starboard sides as well as 180 degrees around the forward tower.

If you have never played GGG, I recommend it.  The models look great, are easy to paint and rig, and the game plays fast and fun.  The round markers you see on the decks of the ships are crew markers (with one being distinct to represent the captain).  Smaller little boats are added behind the proper boats to track hull damage. 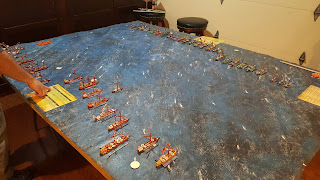 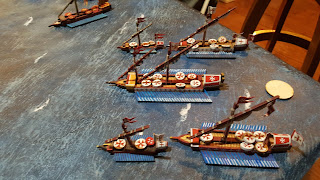 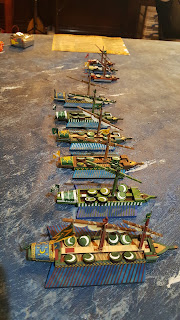 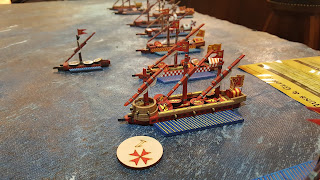 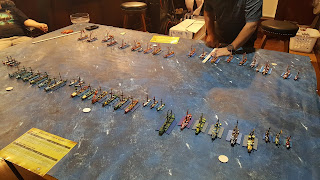 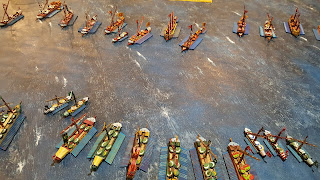 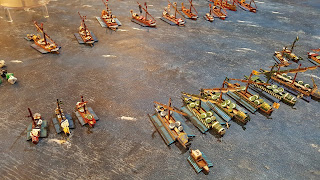 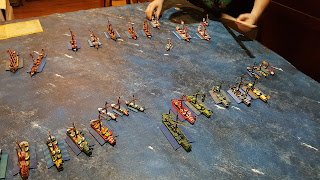 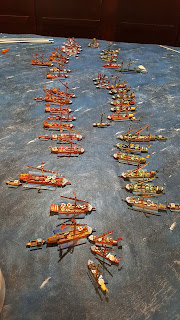 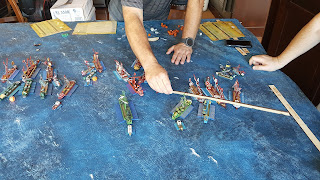 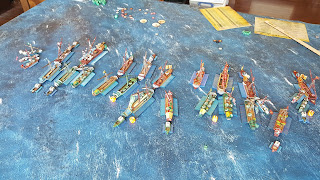 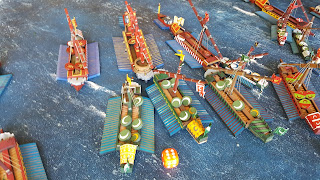 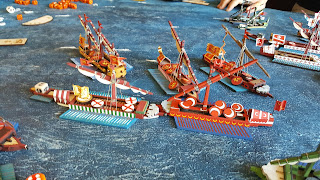 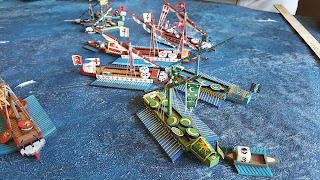 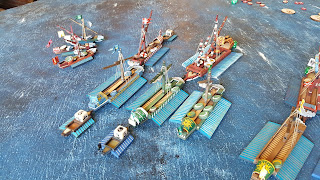 The battle was bloody for both sides.  I would have to say the MVP are the two groups of 3 Turkish Galiots that got around the flanks of the Venetian fleet and did some significant damage to the Venetian command by the Knights of Malta and the Spanish and Papal States command.  Of course the Turkish Galleys has softened up the targets, but those Galiots ramming into the sides of enemy Galleys was the death blow to many ships.

At the end, we called it a "very" minor victory for the Turkish fleet.
Posted by Jay White at 10:08 AM