PacifiCon has come and gone.  Some big changes at the convention this year - and it was all for the better in my opinion.  This convention is hosted at the Santa Clara Marriott.  Last year the hotel was in the middle of some major renovations and it detracted significantly from the convention IMO.  The good news is that the renovations are complete with the exception of some of the rooms.  The new look, feel and layout is all very nice.

While I believe miniatures in general was down a bit from last year, the turnout felt fairly consistent throughout the weekend with a steady flow of miniatures games being run.  There were some really cool ones that I only could see from across the room since I was busy running games.

Roy Scaife, Dan Kerrick, John Lantz, Matt Hilzendarger, Steve and myself all made our way out to a fun weekend of gaming.  The past few months, and August in particular have been absolutely the busiest and most stressful time in my life.  All that came to a conclusion at this convention so the stress relief was great.  Unfortunately I didn't stay up playing board games and much as I would have liked to  --- and most of us were exhausted at night after a full day a miniature gaming.

Anyways, enough babbling ... on to the pictures!

Dan Kerrick ran his beautiful Battle for Endor game.  Dan ran this late on Saturday and I admit to being a little "in the bag" at this point.  I was handed a single googly eye which became the thing to sneak into pictures ...

Fun game enjoyed by all.  Dan was a real sport putting up with my google eyed nonsense :-) 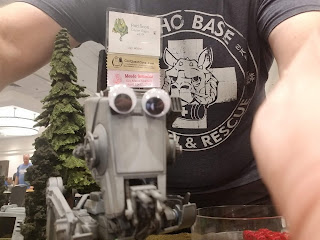 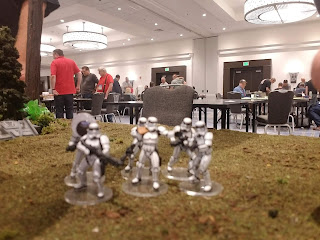 The main post on this is here.  I really couldn't be happier with how this all turned out.  I hadn't had a chance to play test the game at all before packing up and heading to the convention.  Fortunately I was able to run it twice - once on Friday afternoon and on Saturday morning.  Friday was great and allowed me to make some minor adjustments for Saturday which ran really well.

My only disappointment was that my cool new Star Wars shirts I order got delivered on Saturday afternoon at my house ... so I couldn't wear them for the games.  I especially wanted to wear the one with the AT-AT footprint!

The exceptionally talented Thomas Foss ran this Maximillon Death Race game which was a ton of fun.  I find it odd to say that since I got blow up before I got to the second turn, but it was a blast!  I look forward to trying this game again in the future.

More from the amazing Thomas Foss.  I played in his 54mm wooden soldier Wars of Imaginations game.  I ran a Brigade and entrenched artillery position.  Happy to report that I held my flank, but the rest of the army on my side evaporated and so I found myself on the losing side.

Very fast, easy and fun game using a home grown set of rules from Thomas that is currently based on Warmaster.  Thomas is an amazing painter ... as you can see by the pictures below ...

While the weekend was PACKED full of miniature games I did manage to run about a couple of times and snap some pictures of other games.

There you have it - looking forward to the next convention already.
Posted by Jay White at 11:17 AM 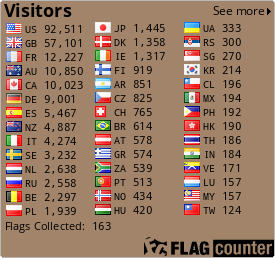