Today I headed over (along with Roy Scaife) to Adam Clark's place to play a game of Bolt Action in honor of the anniversary of operation Market Garden.  The scenario we played as "breakthrough at Nijmegen" which pitched a US airborne force against a mixed force of Germans (Fallschirmjager and Panzer Grenadiers).

As a personal side note, I really needed this game.  The past week at work was perhaps one of the most stressful weeks of my career and I was sick all week (hacking up a lung) - unable to take work off and in fact working late every night and through most of last weekend. So it was just about the worst week I've had in my professional career ... egads!  So heading over to roll some dice and push some lead around the table was just what the doctor ordered. Anyways ...

Adam's table consisted of a city layout that uses his custom laser-cut buildings which make an imposing battlefield.

The German forces consisted of:

The US Airborne forces consisted of:

The Germans defending choose the table edge and deployed at least 1/2 of their units.  Almost all units started on the table with some armoured units left in reserve.  The opening bombardment was not very effective, putting a pin on a few units which was shook off quickly in the first turn.

Adam employed his now famous "feint in force" tactic (which is just a joke for overloading one side).  All five US airborne sections got deployed on the "near" corner of the table (in the first picture).  The Germans spread the 5 sections across the deployment zone but used the advancing turns to bring 4 of the sections over to counter the US build up.

The Panther did almost nothing the whole game ... the armour on both sides really didn't have an effect on the outcome of the game.  The US and German infantry had a series of deadly assaults for the buildings and roads of the near side of the table (again, in the first picture).  The US managed to have an officer unit in the German deployment zone and got a single infantry section off the table.  That was by the end of turn six and was game deciding.  One of the Fallschirmjager sections took out several small teams on the far side flank - putting the Germans ahead by a few dice - but not enough to offset the eventual breakthrough on the near flank by the US infantry sections.

The German medic jumping in a SdKfz 251 and MMG'd a US infantry section (hoping nobody could see his white helmet I suppose) --- it backfired on him --- the M8 Scott armoured car blew up the SdKfz 251 and the medic perished in the smoke and flames ... karma is a bitch.

Overall it was a very near game right up until the end ... pictures below. 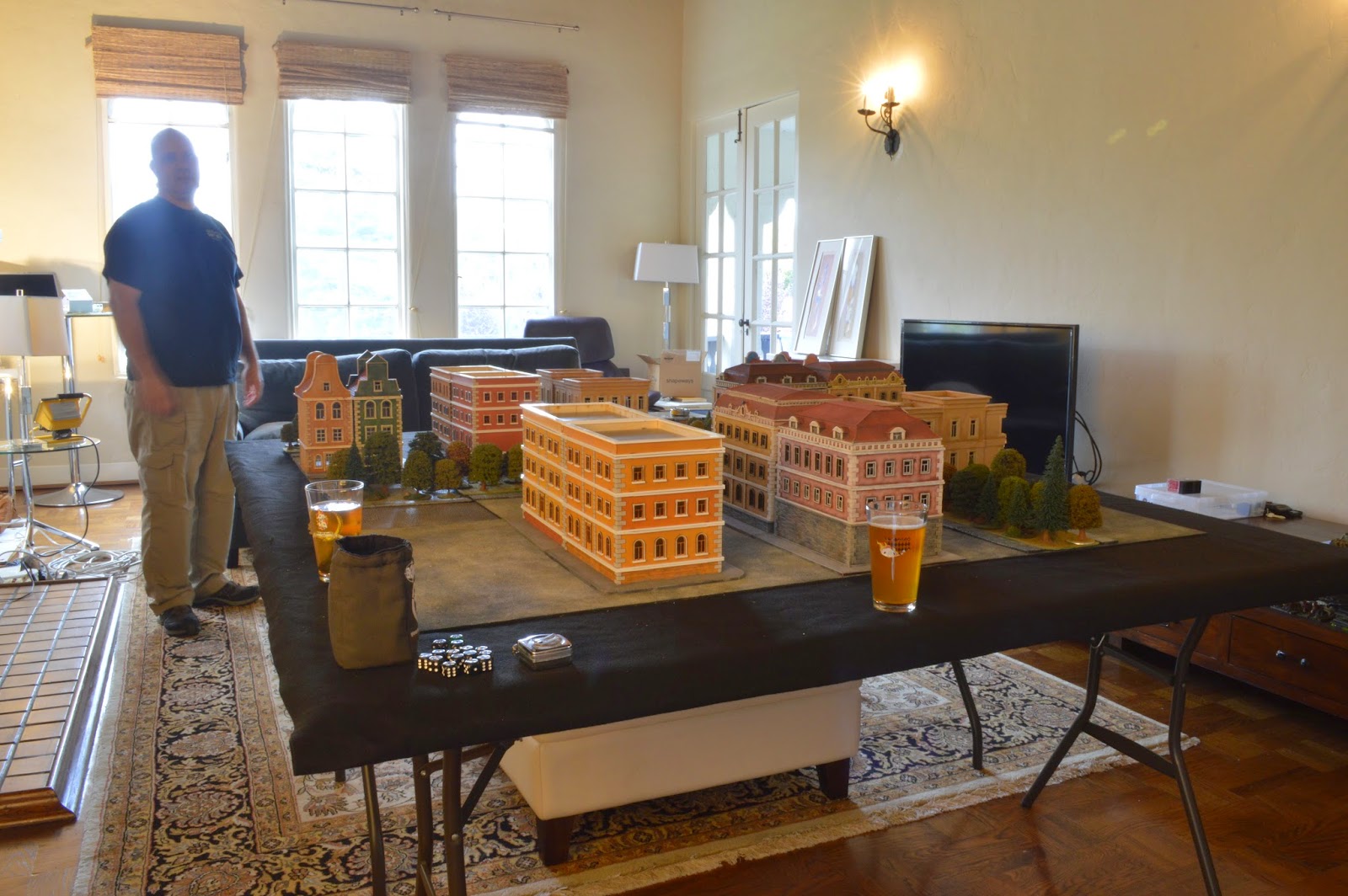 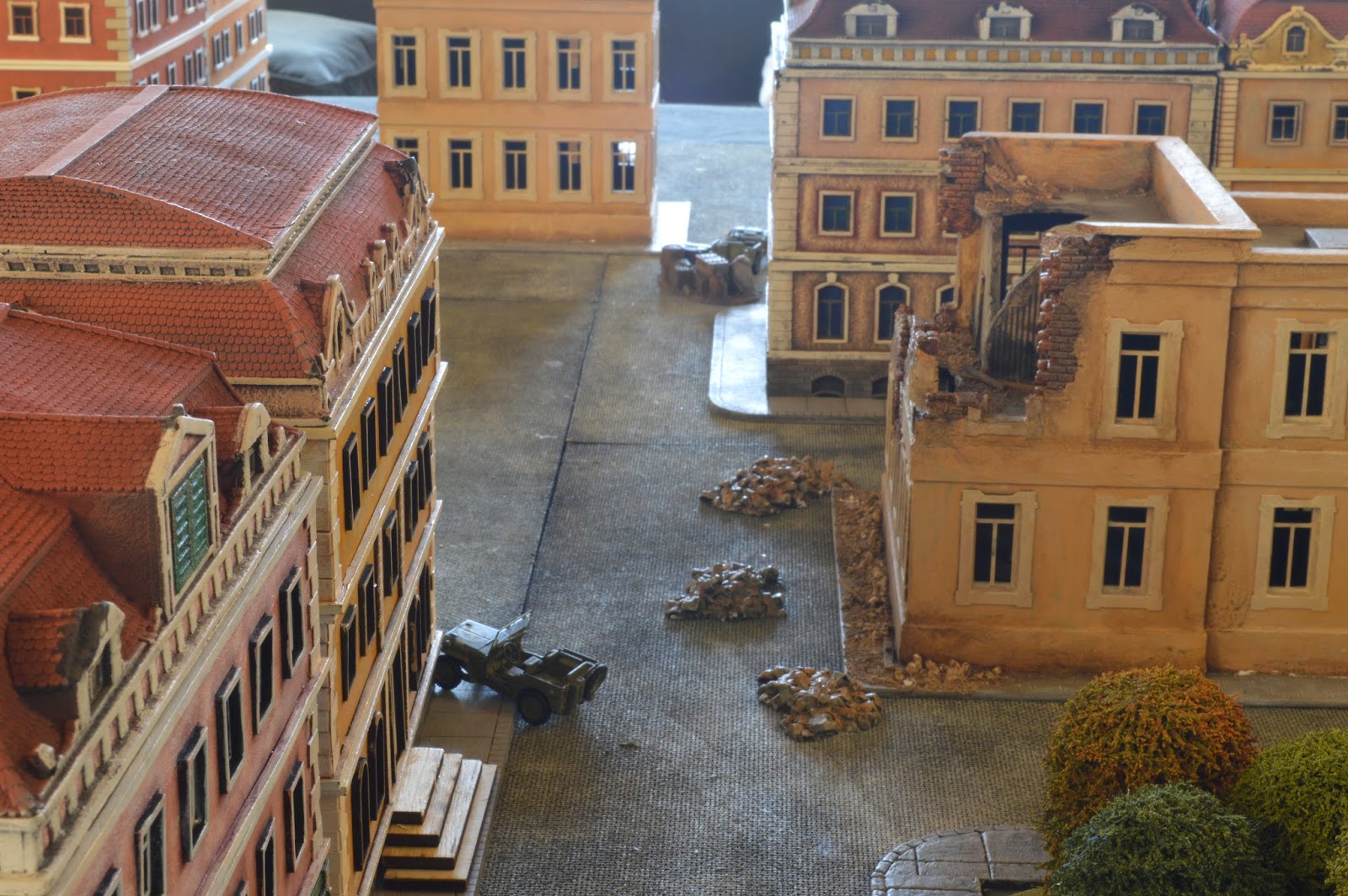 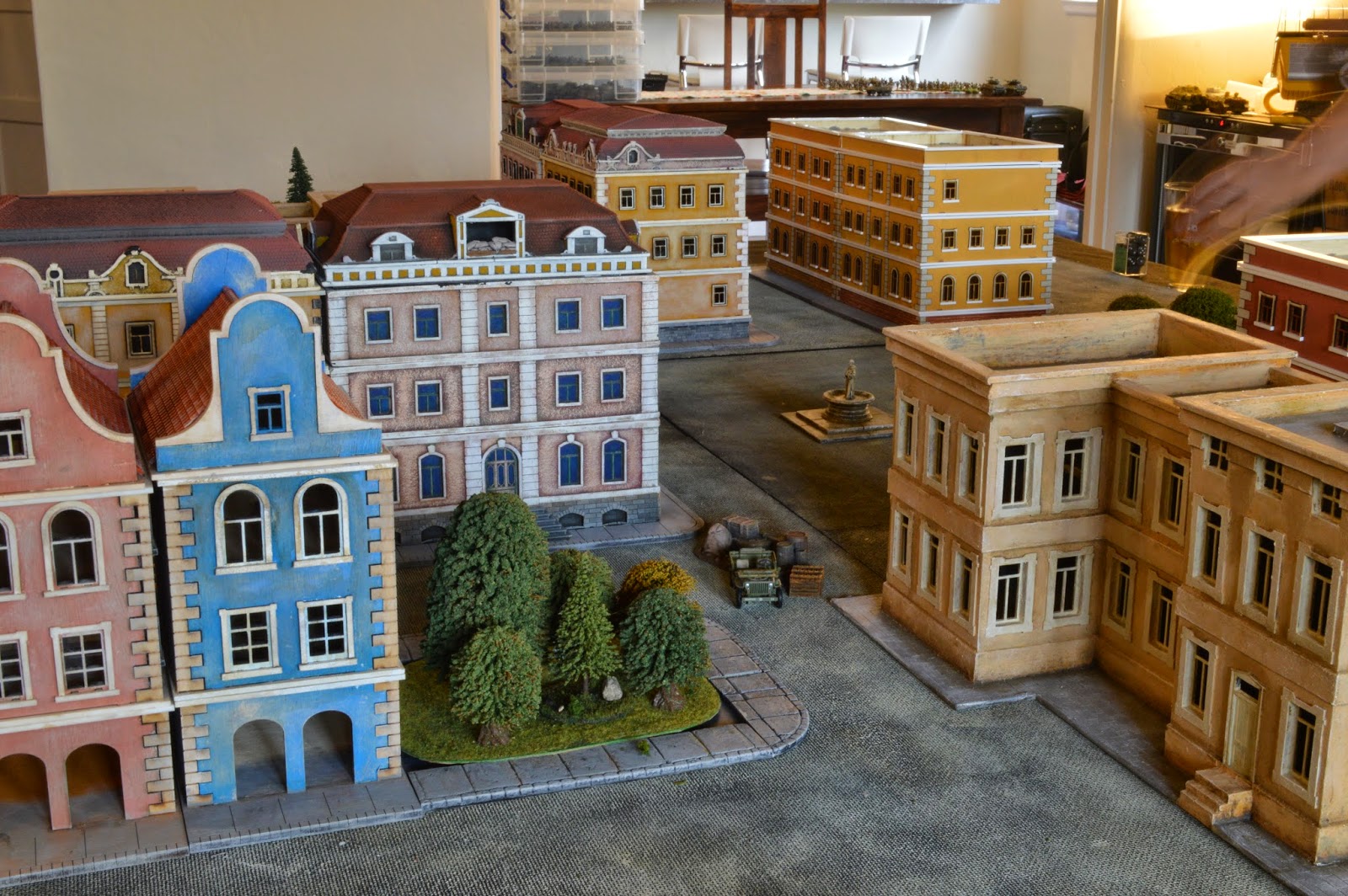 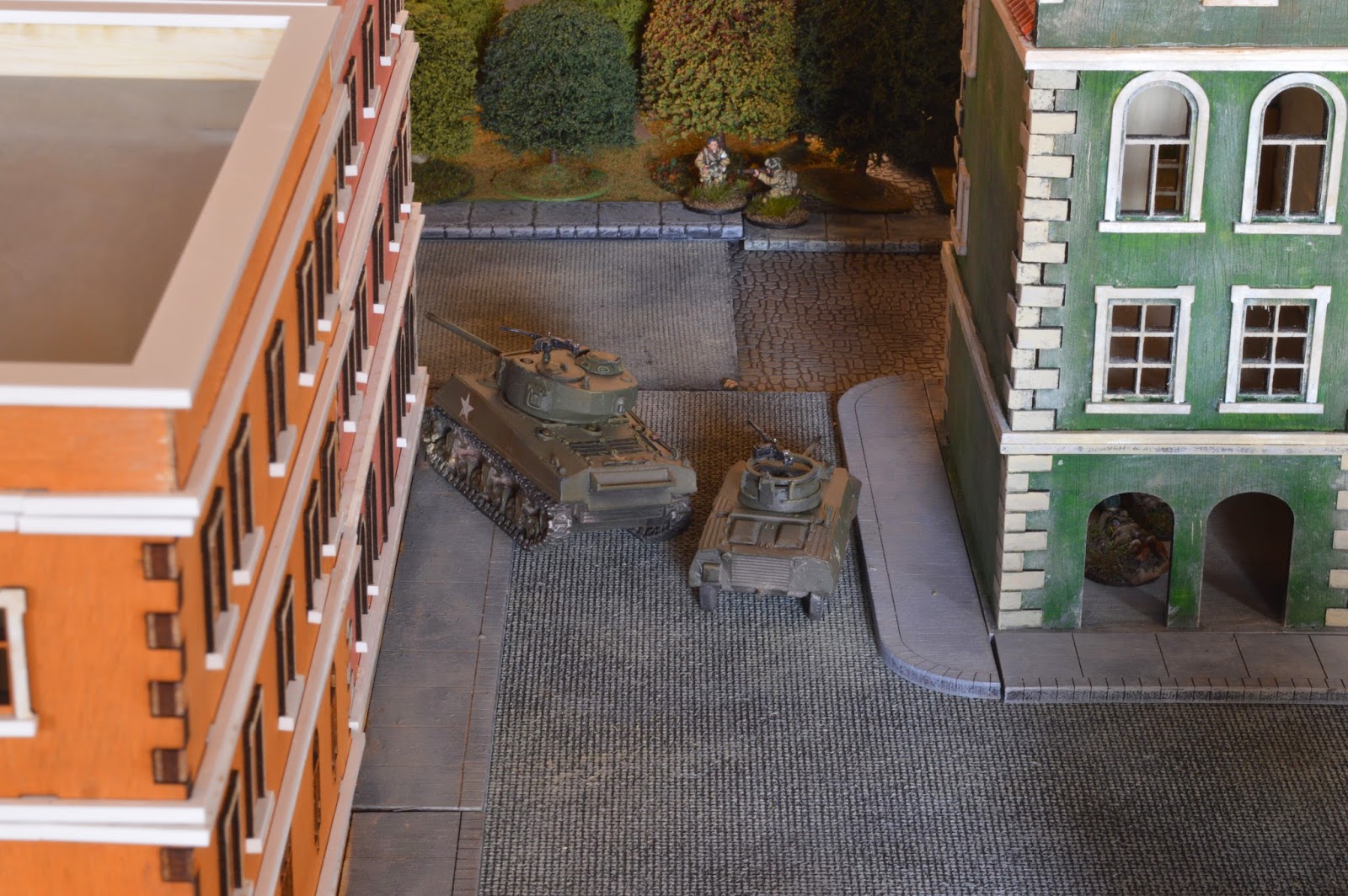 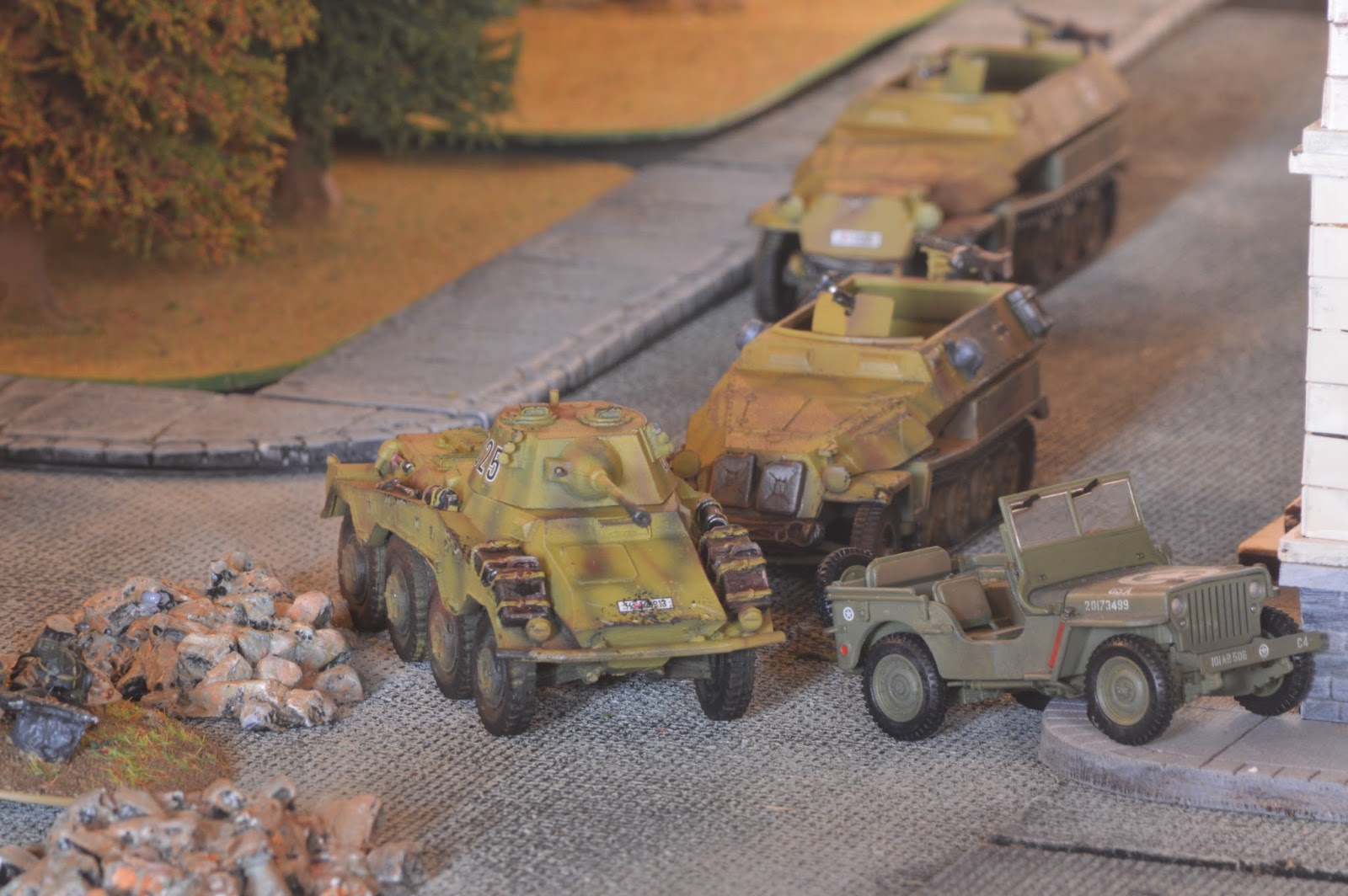 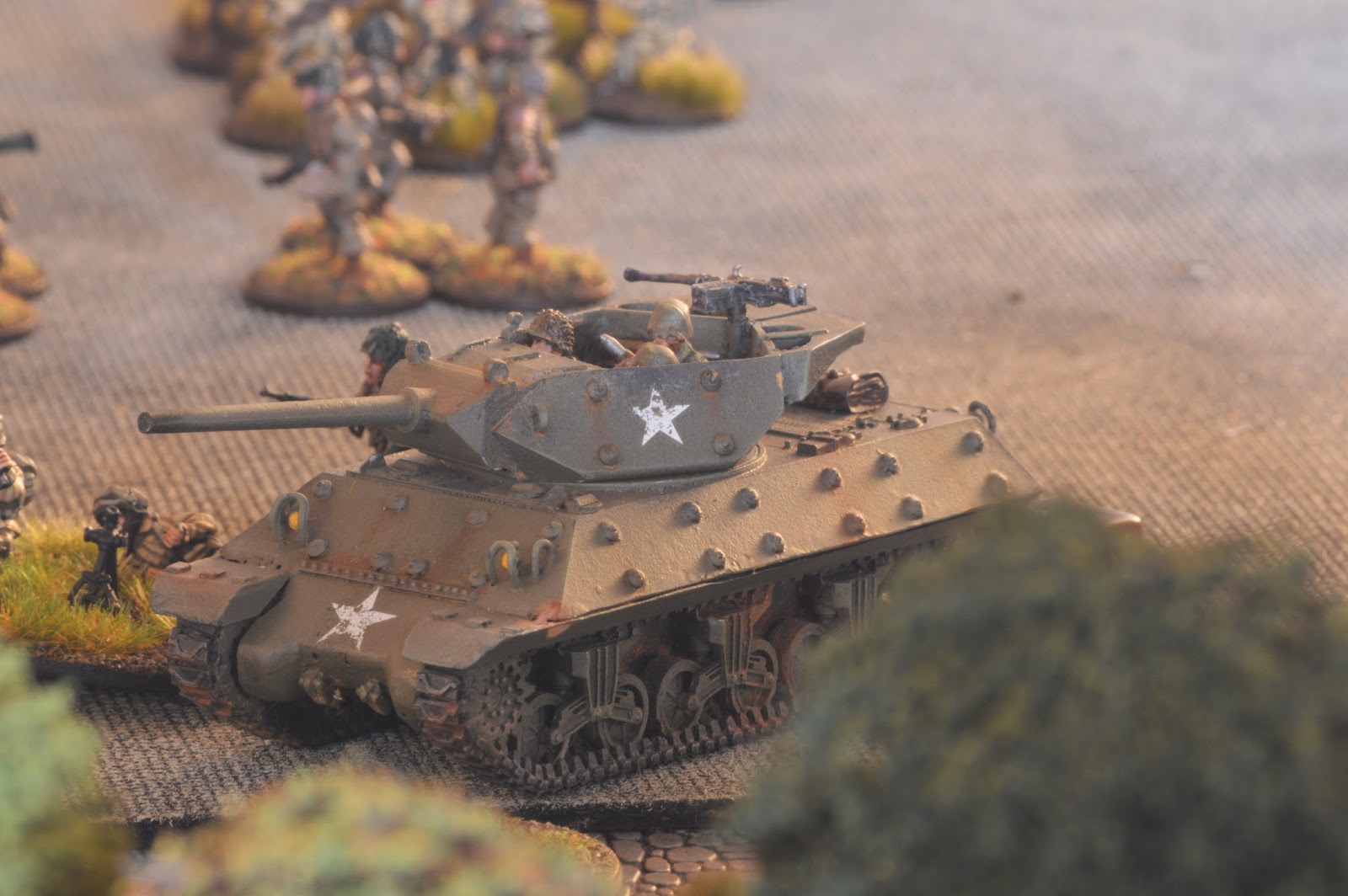 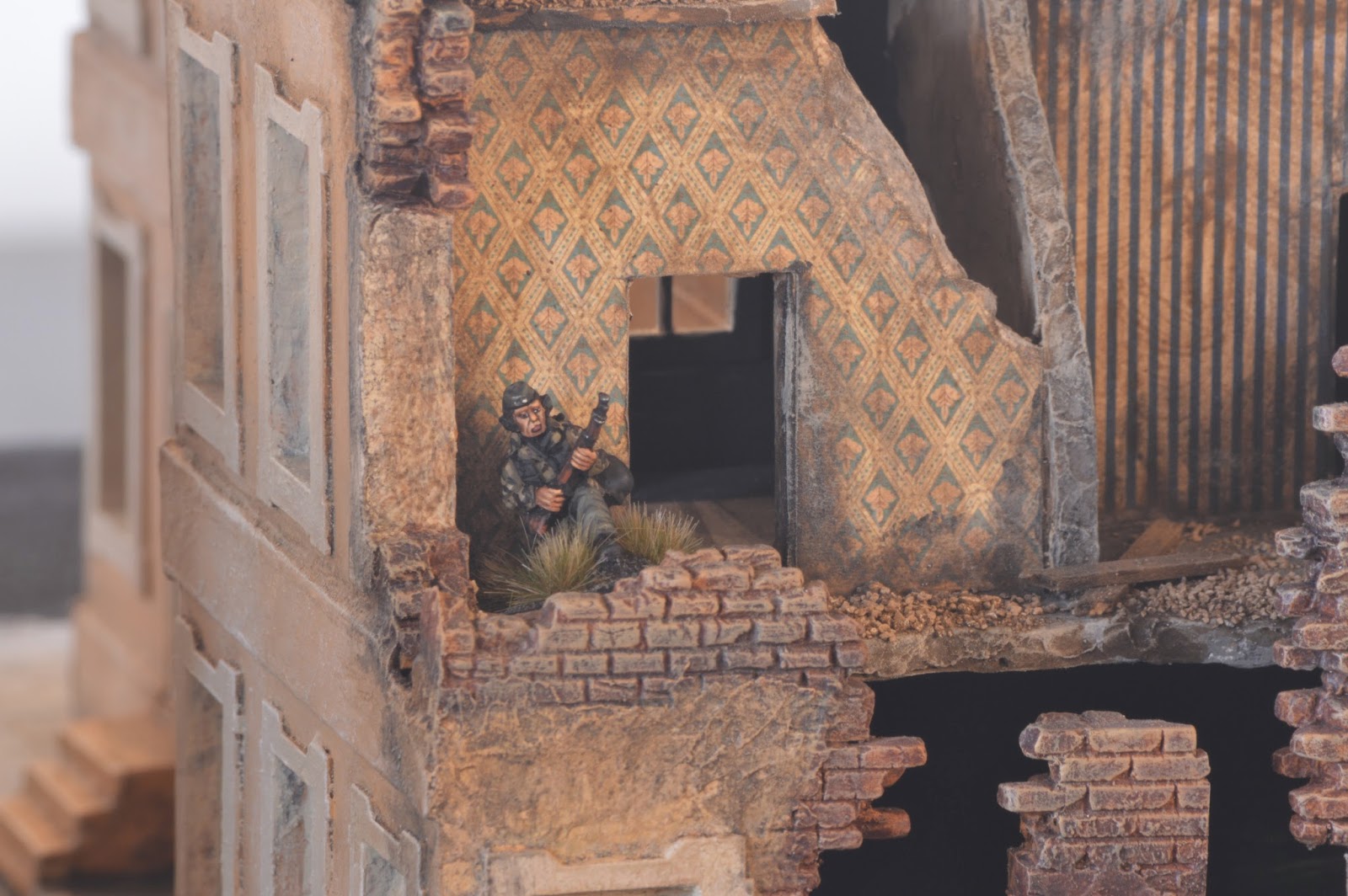 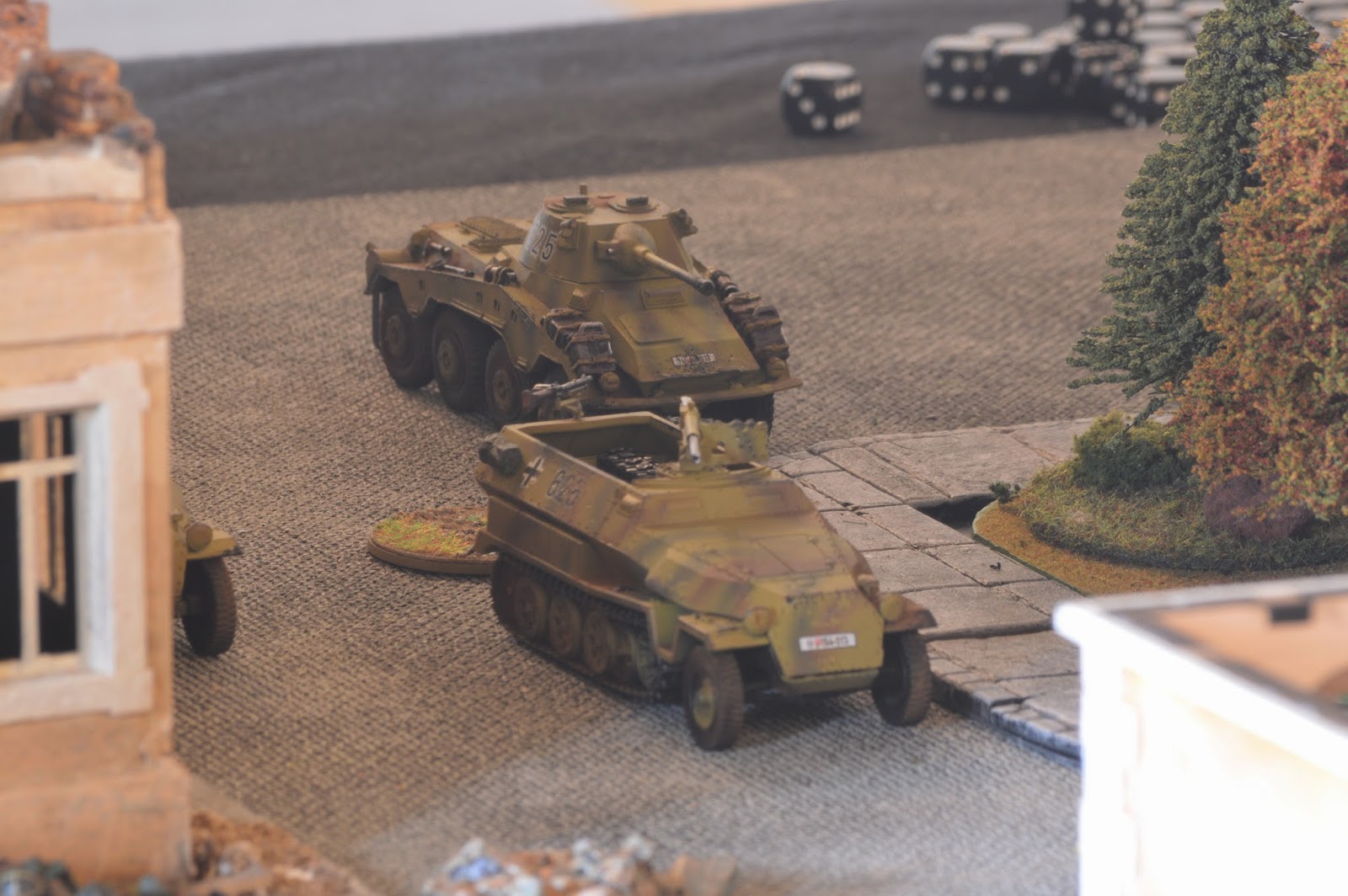 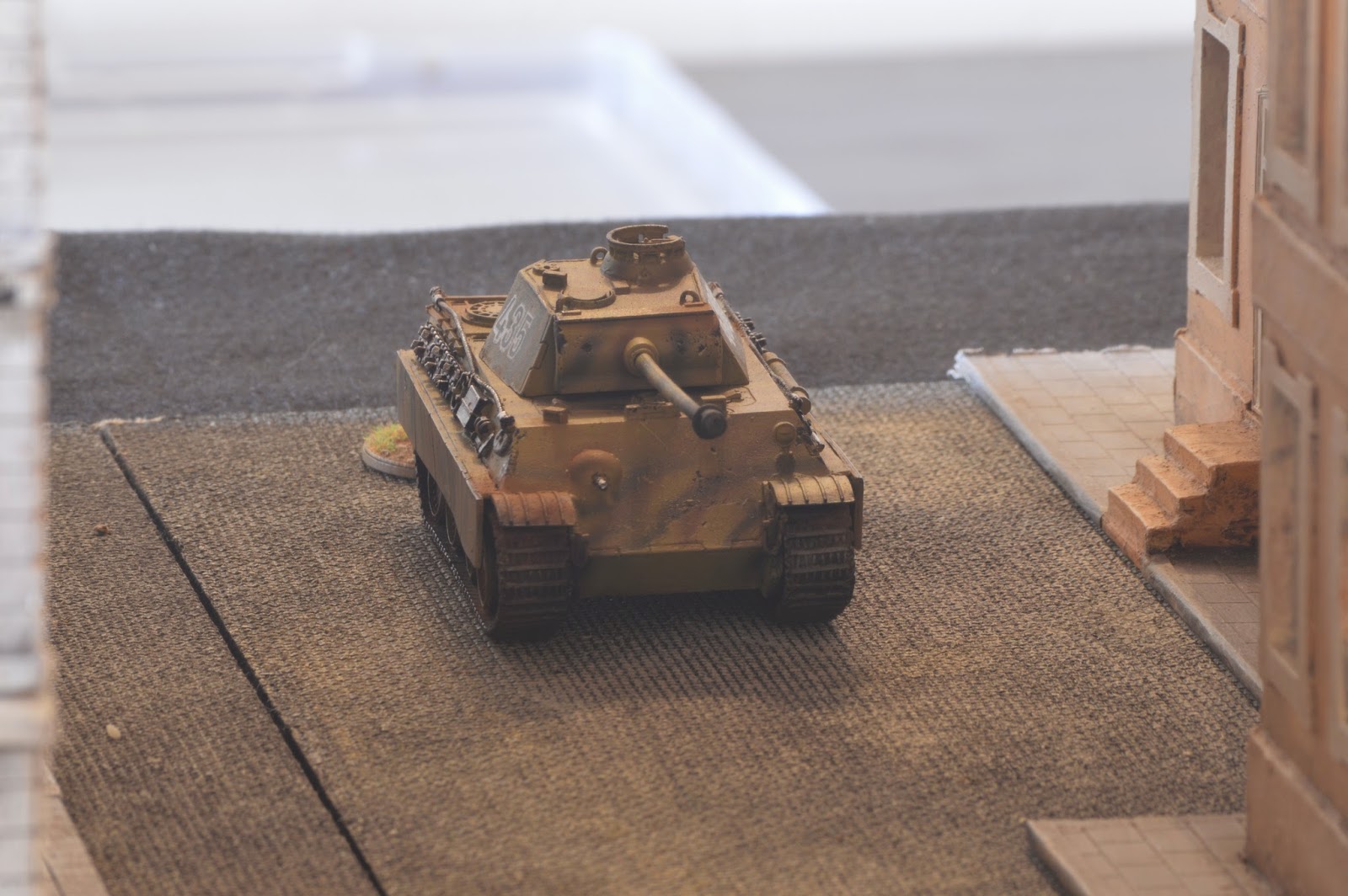 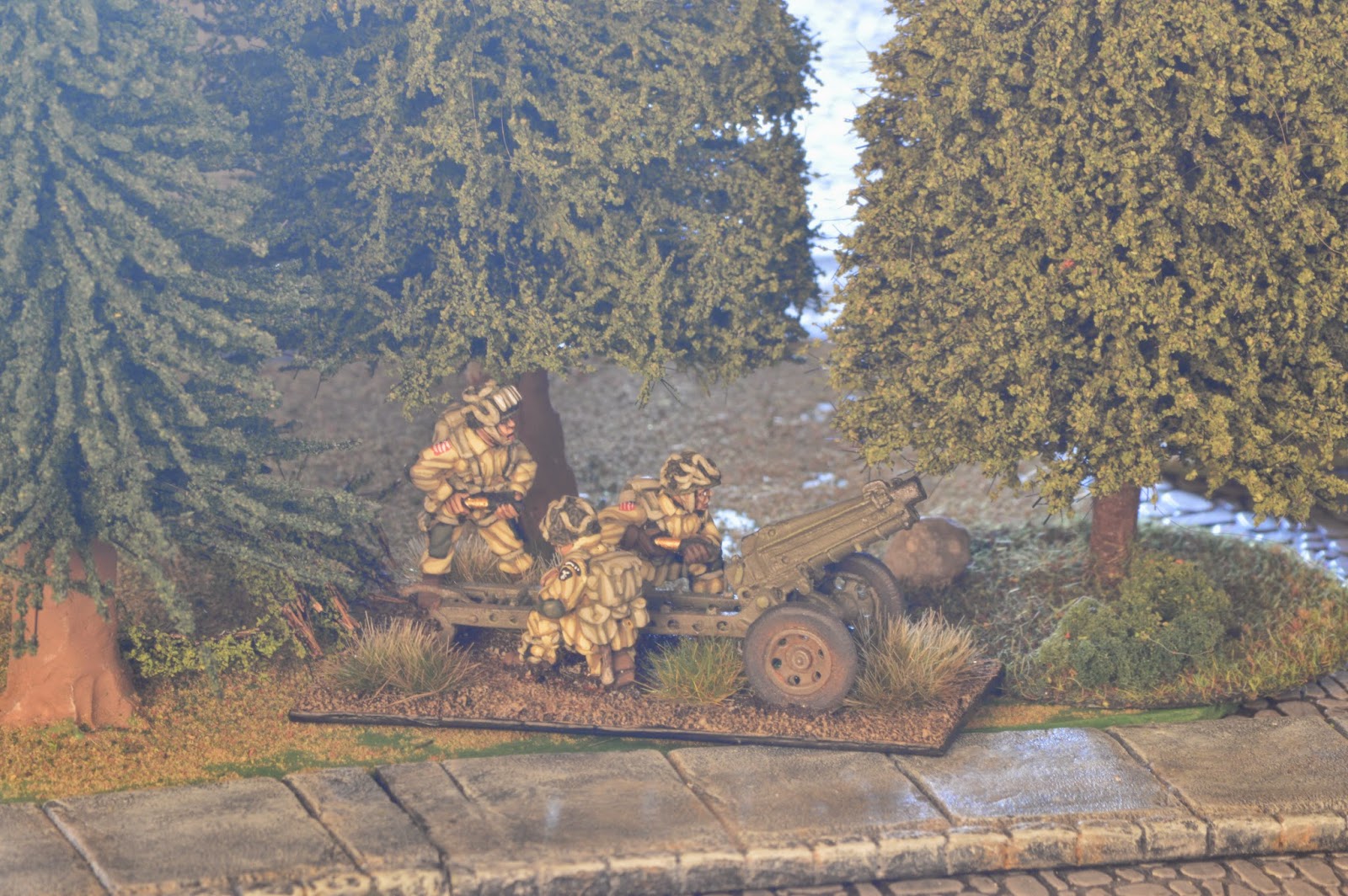 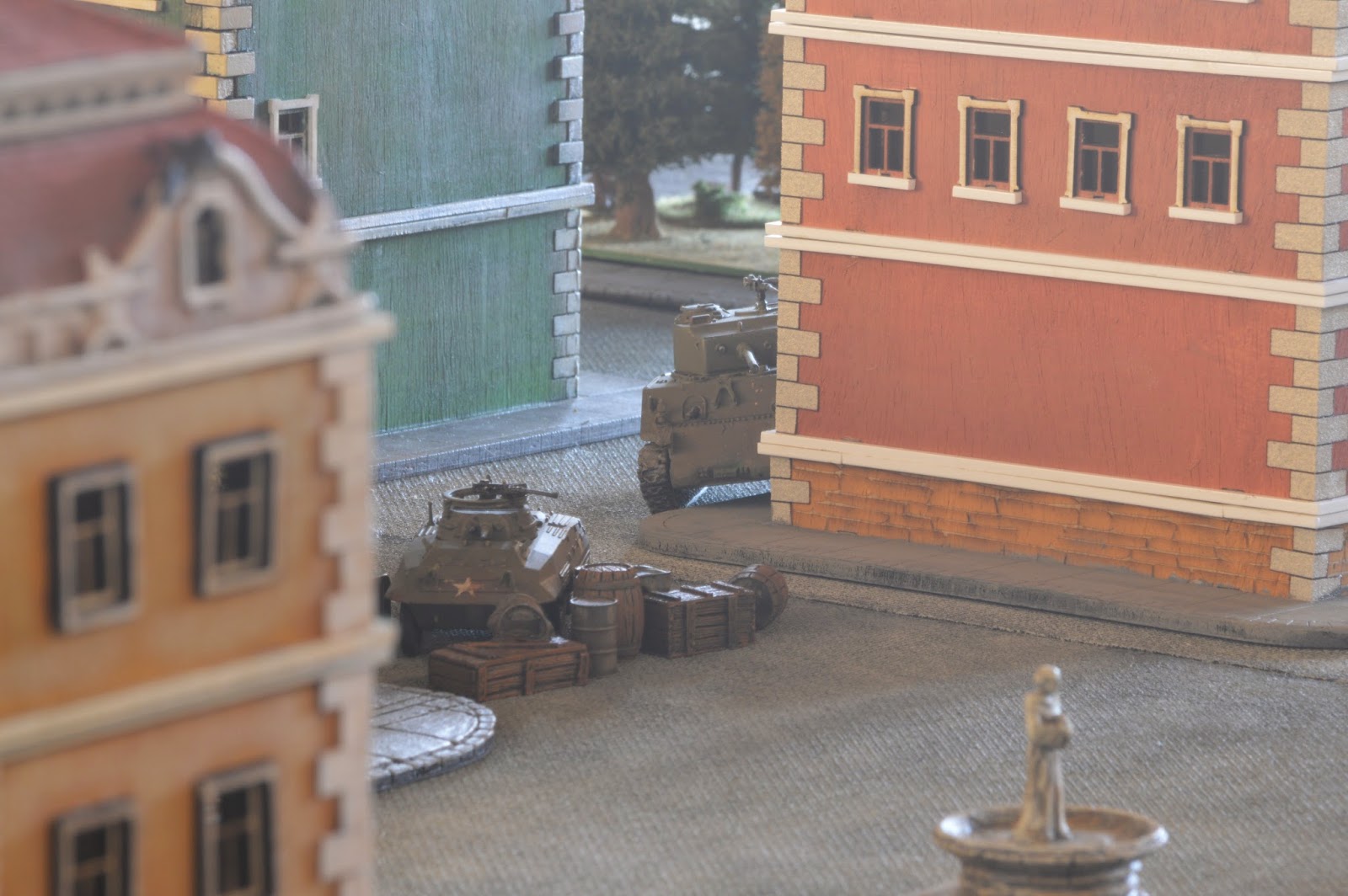 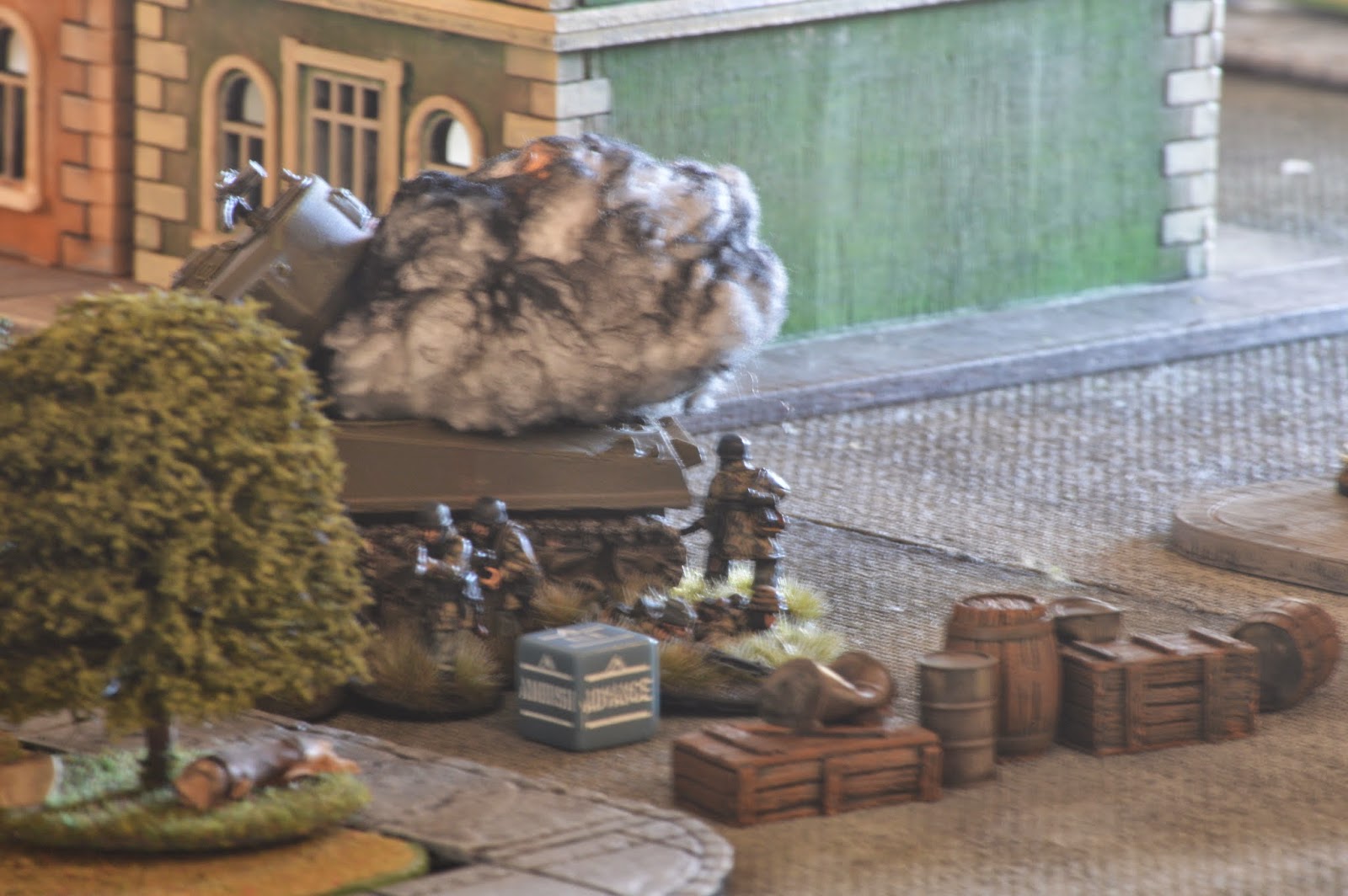 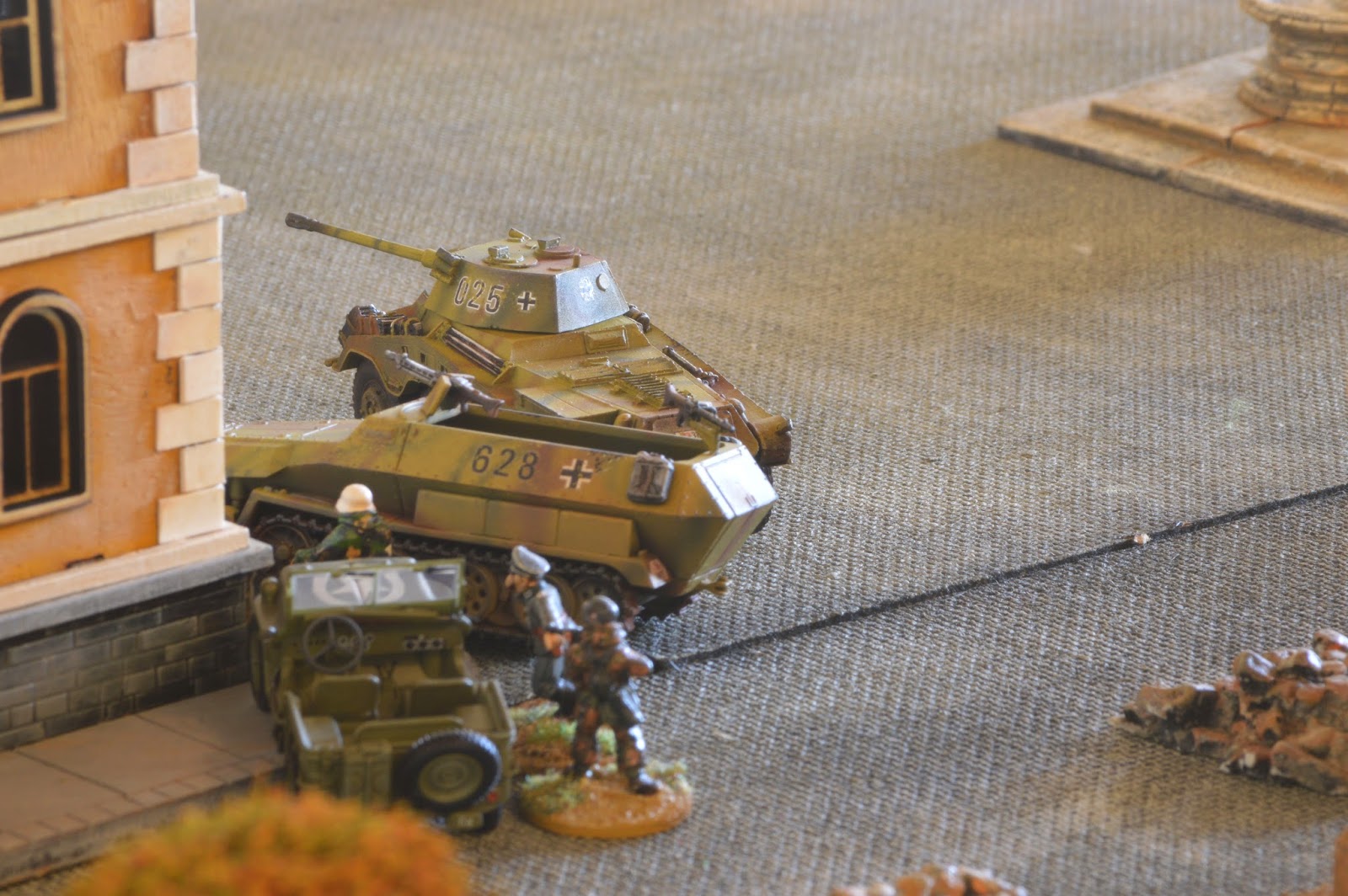 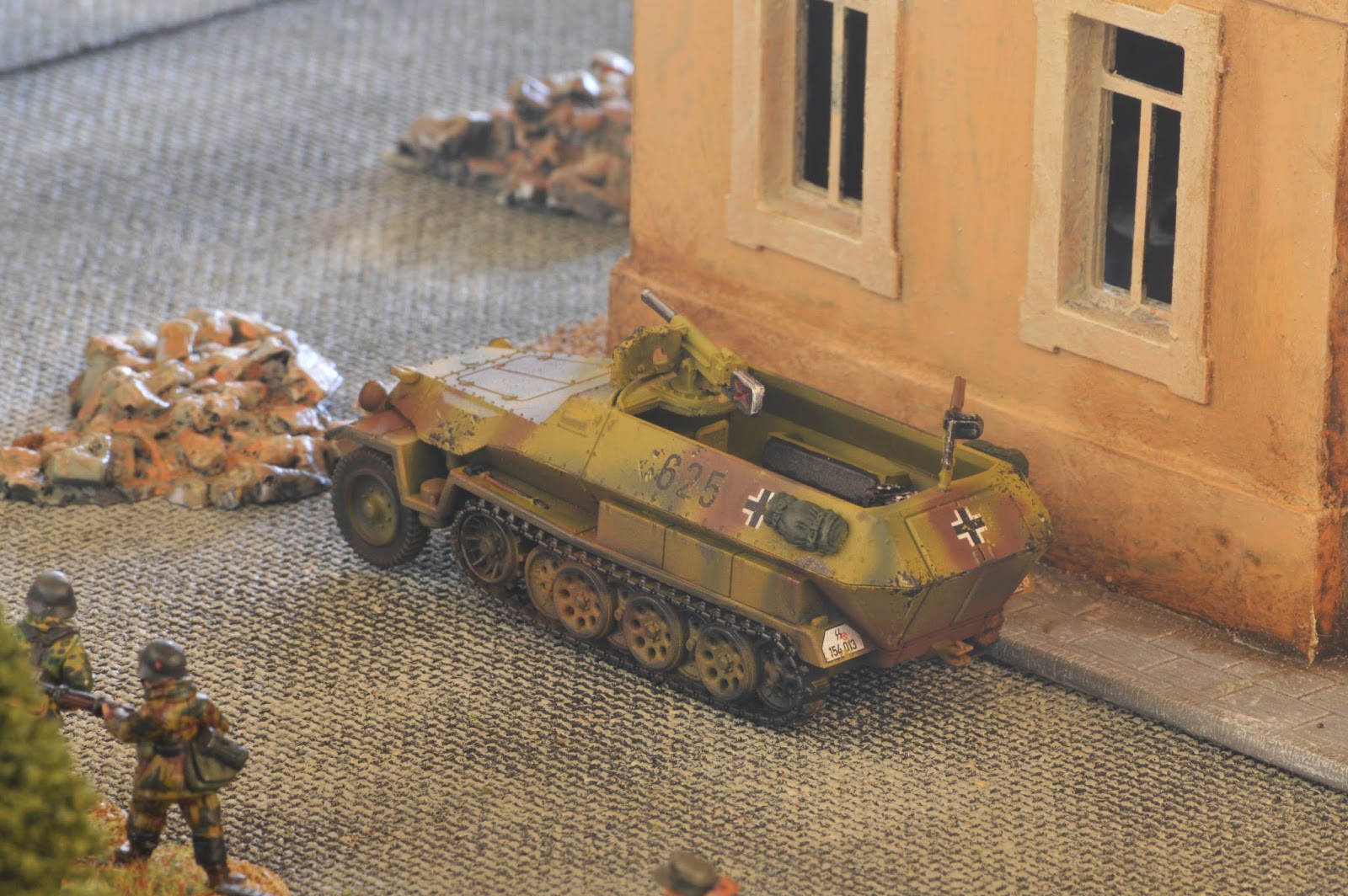 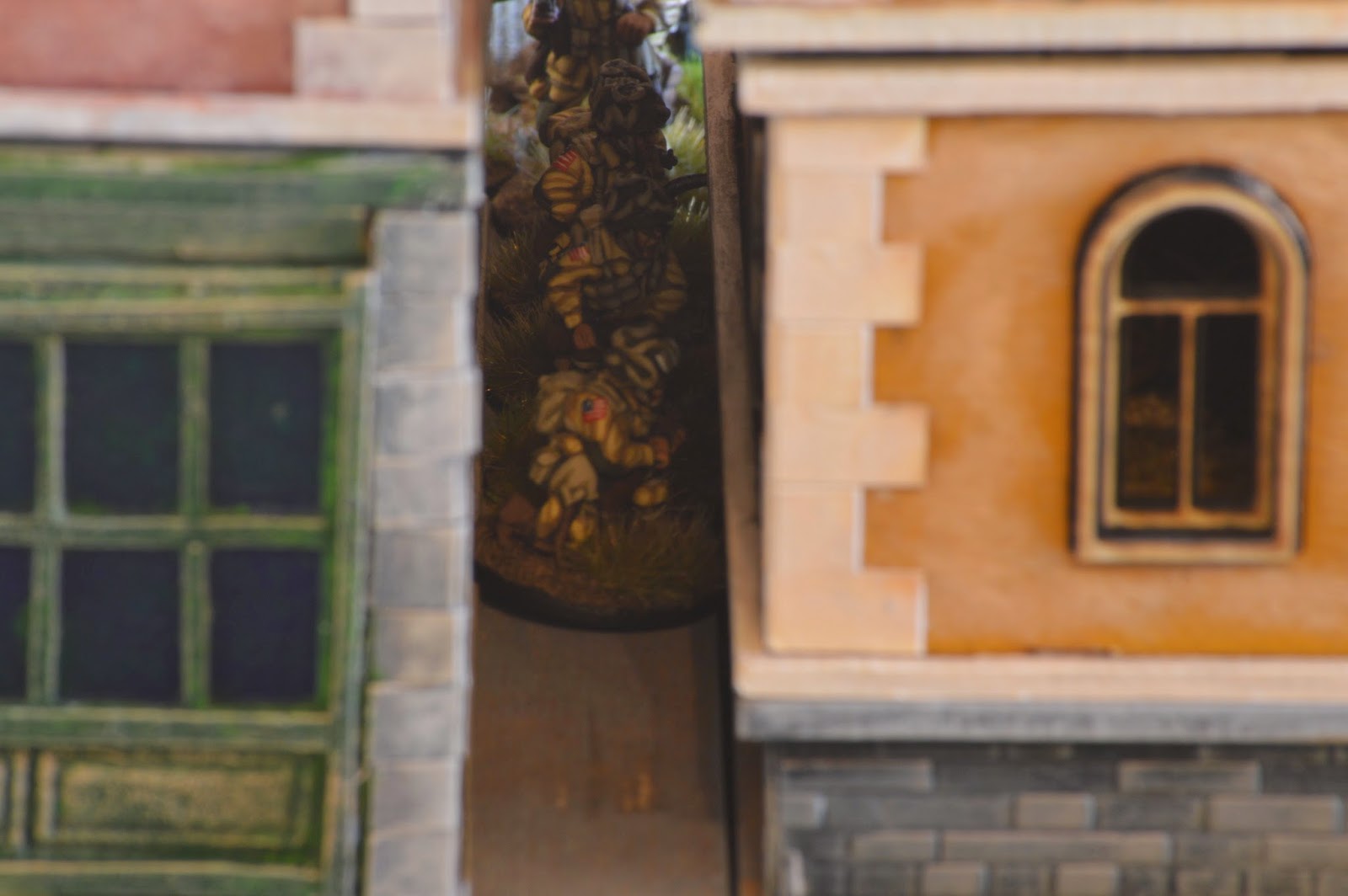 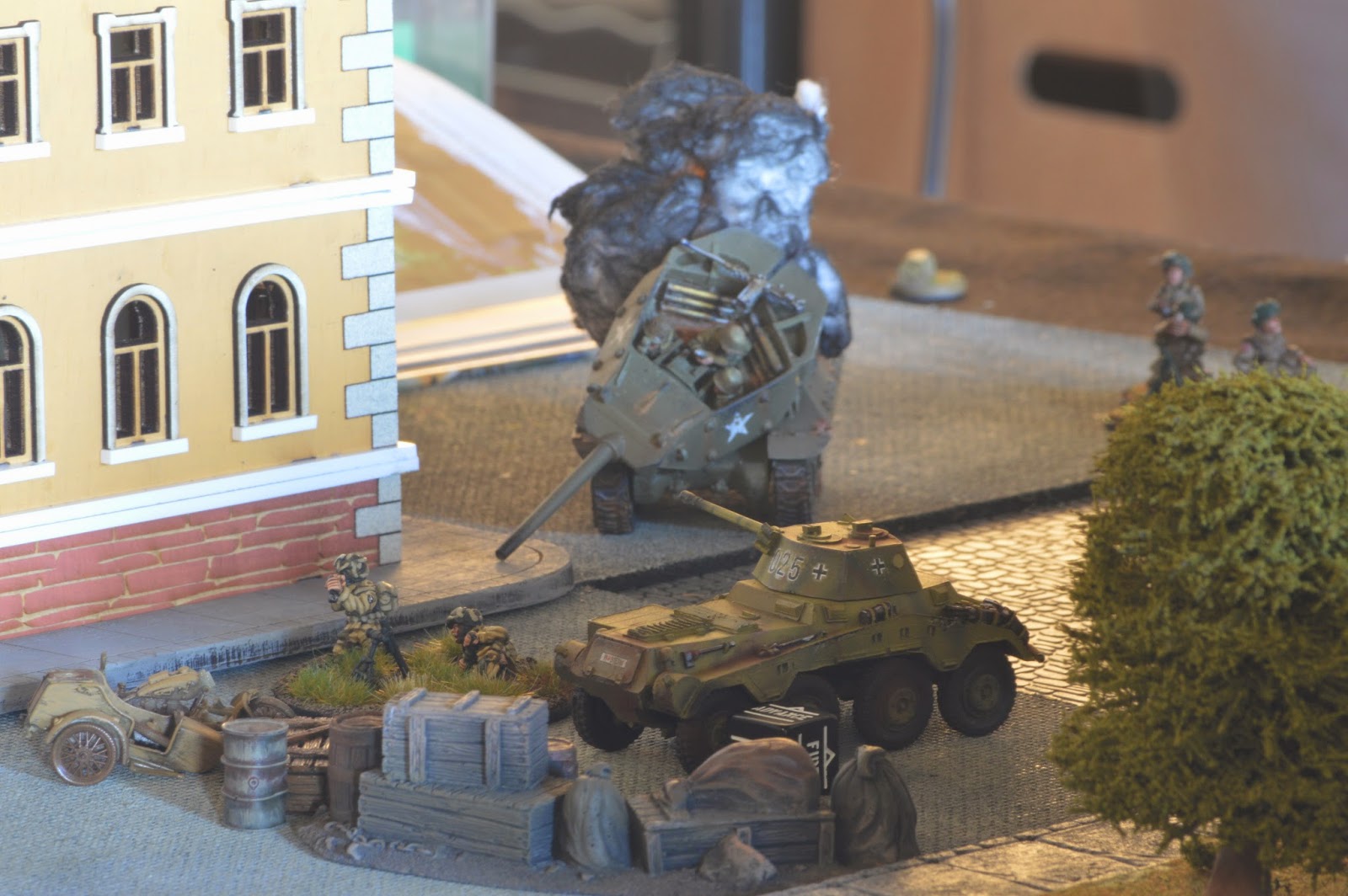 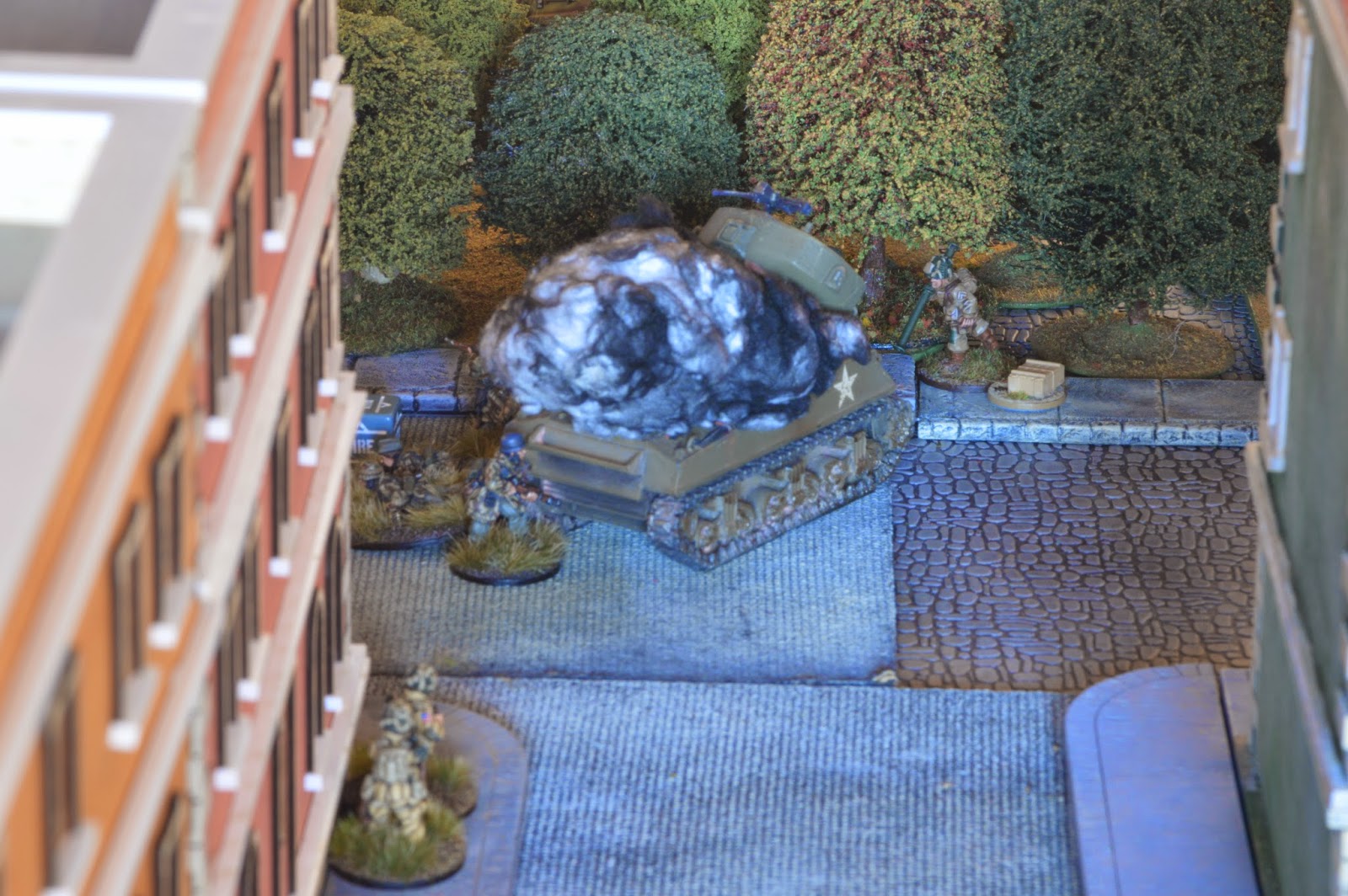 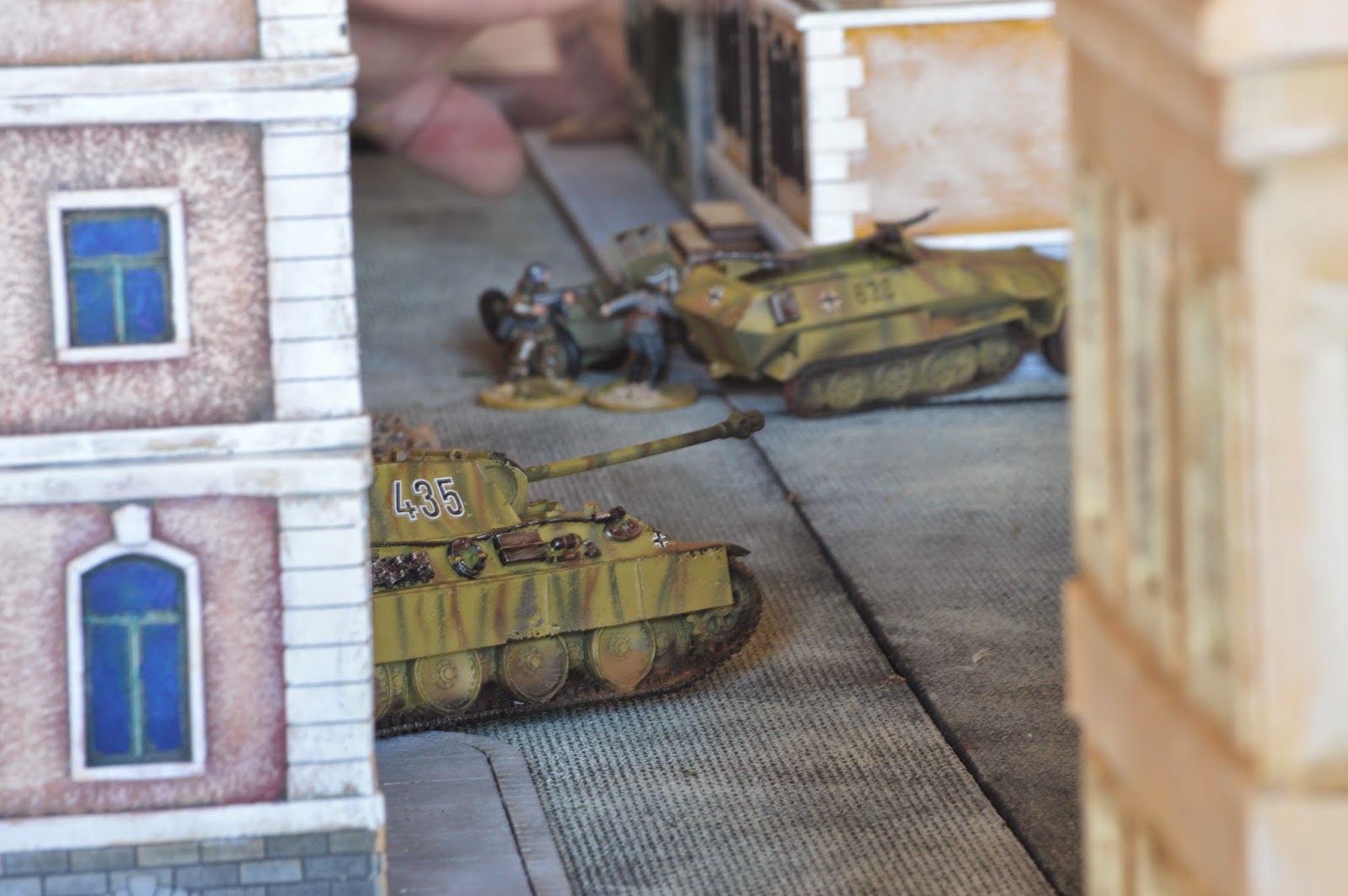 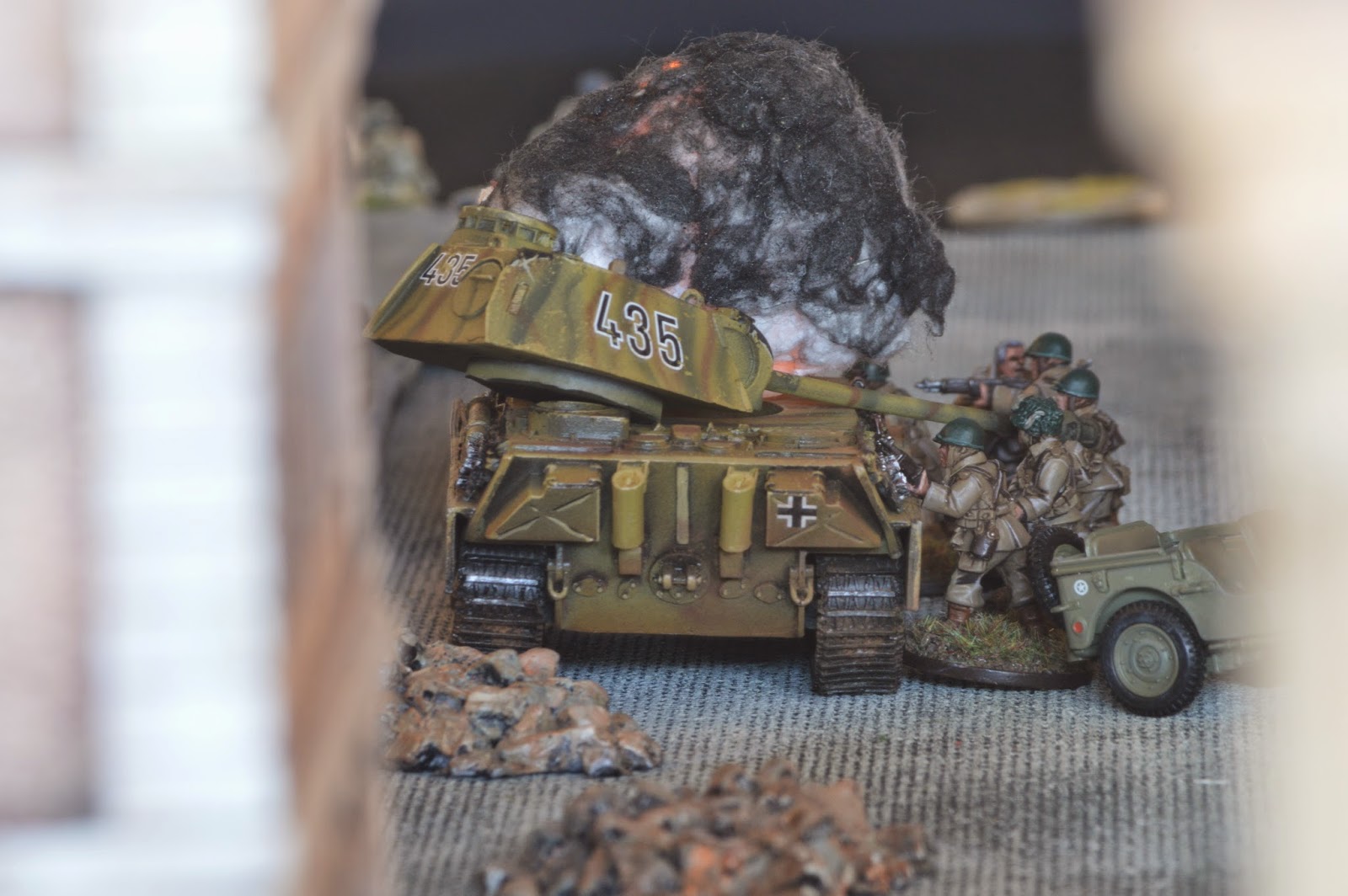 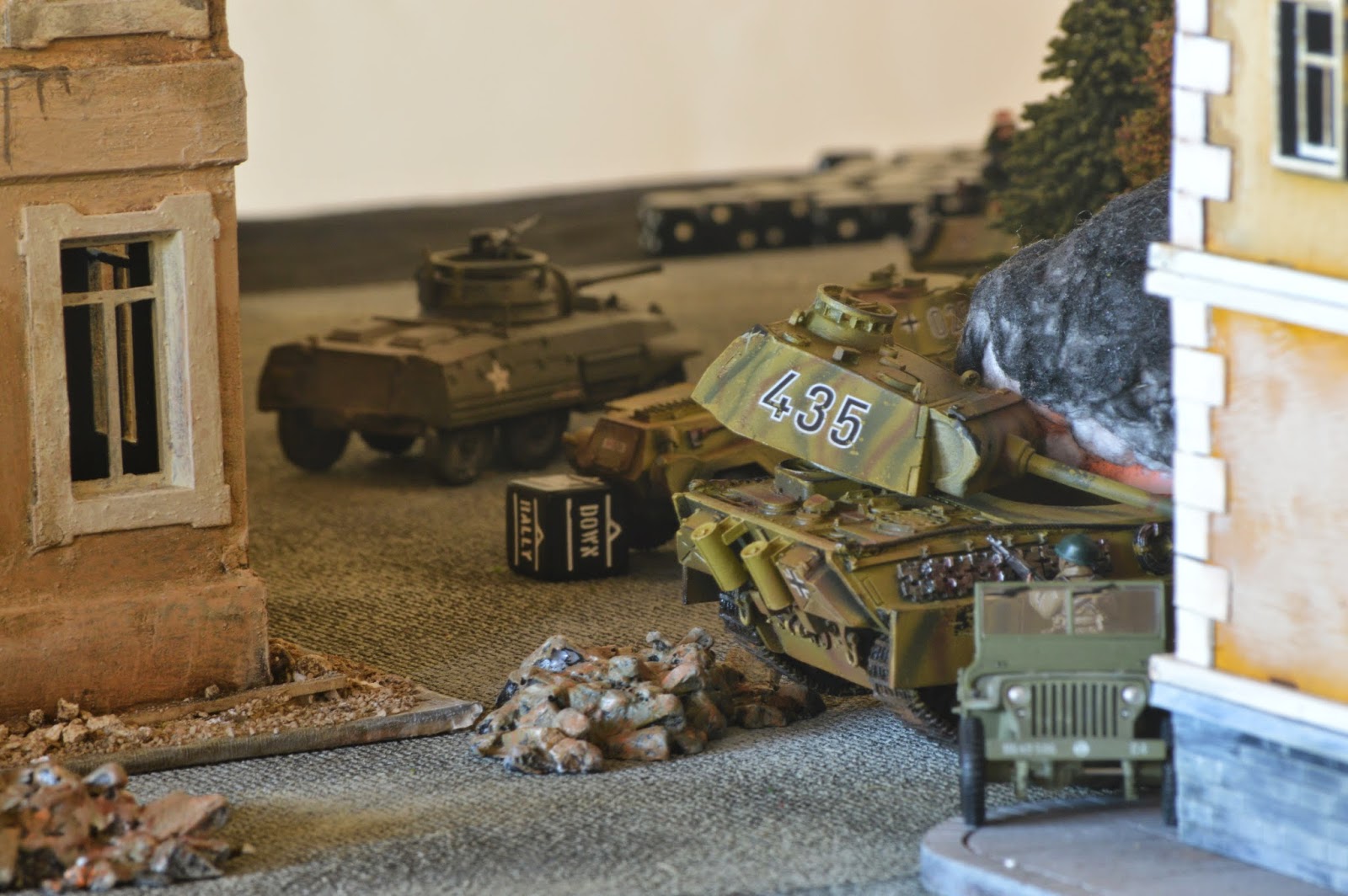 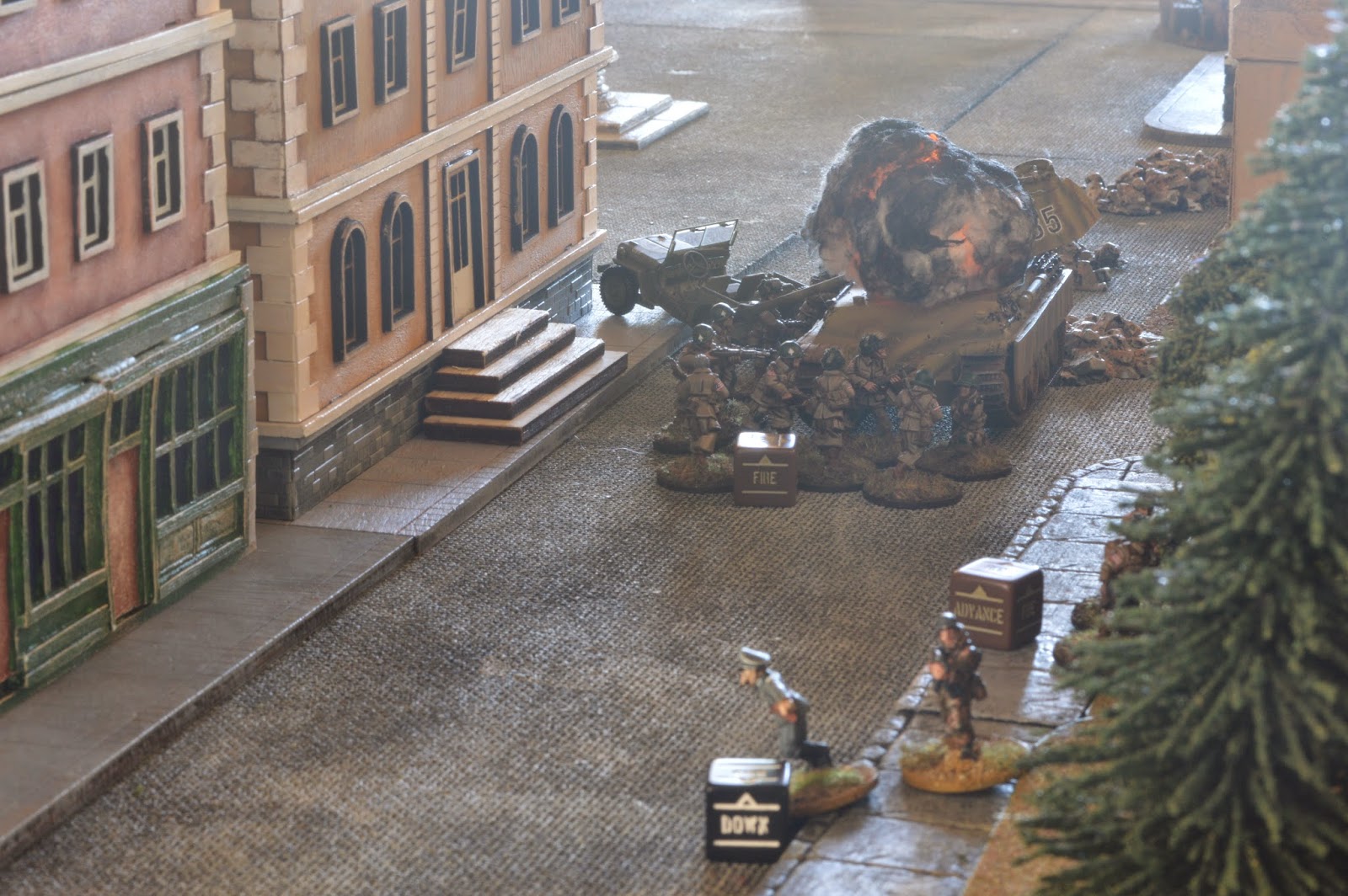 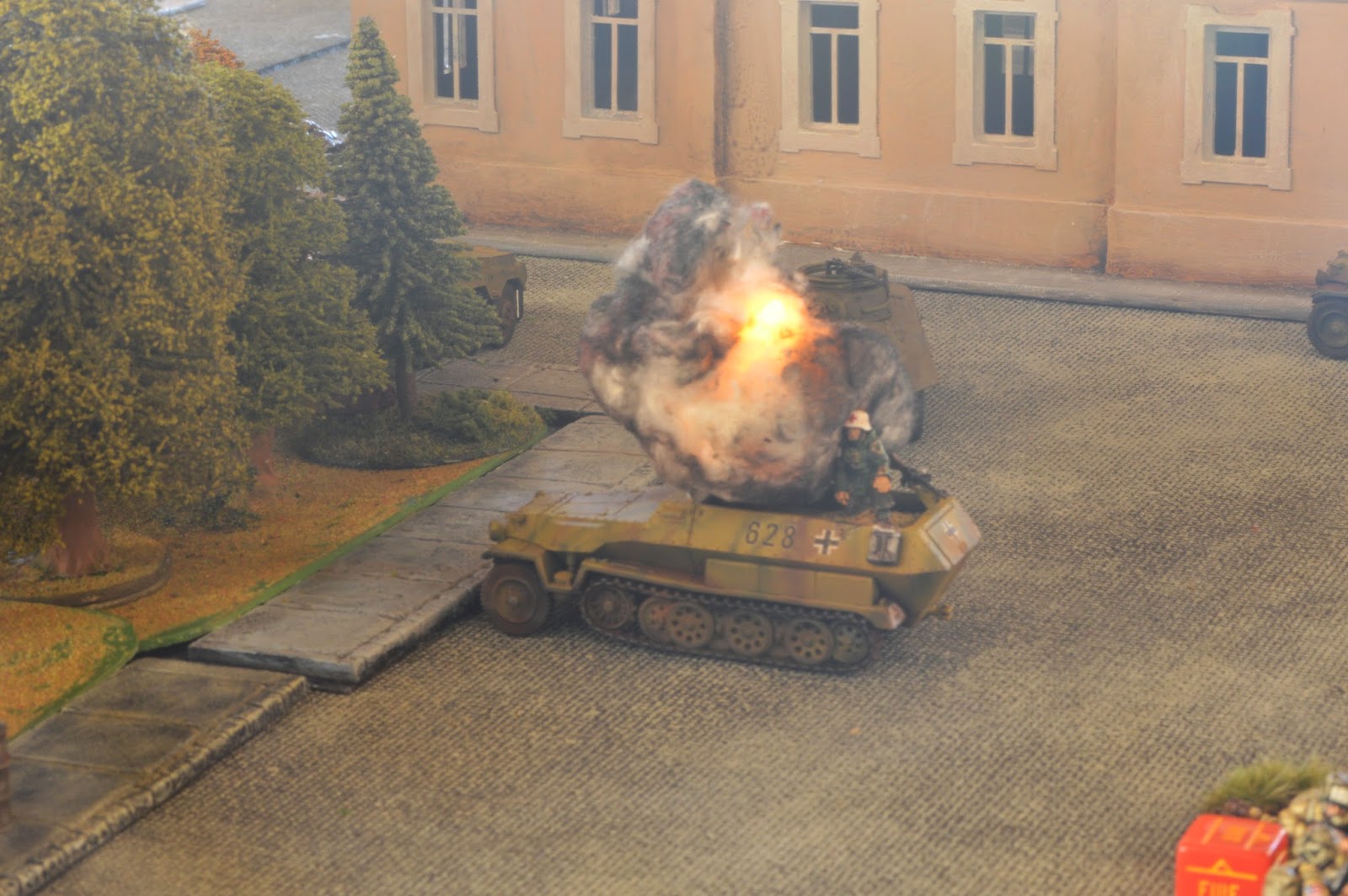