Made some great progress today.  I stopped by Bob's Foam Factory on Saturday and bought all the blue foam I needed to make my Omaha Beach table.  Today I hunkered down and was able to cut and shape all the foam and get the base table completed.  It's been a while since I broke out my Tippi foam cutter --- I really can't recommend one enough if you have to cut foam ... way better than the other types on the market that use the flimsy little wire that breaks constantly.

I wanted the cliff to be imposing.  There will be two large bunkers that hang over the cliff and either side of the bunkers will be trails that lead up the cliff face (so a total of 4 trails leading up the cliff face).  I've included a picture below from Saving Private Ryan that shows roughly what I mean by the large cliff face bunkers.

Picture below taken using my phone camera (some with flash, some without). 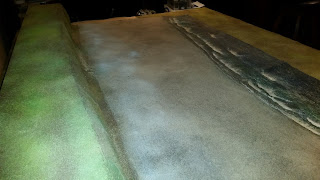 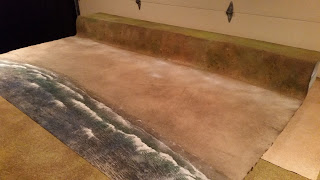 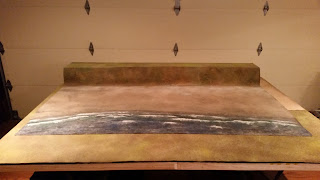 There will be a sand berm a little before the cliff that will be lined with barbed wire and hedgehogs.  Any infantry section that makes it to the berm can spend an action to detonate a Bangalore torpedo to create a gap in the wire and a crater that will provide light cover.  Bangalore torpedoes will be able to be used twice during the game (creating two gaps in the berm obstacles).

I have a ton of beach obstacles to assemble now ... so moving on to that stage.
Posted by Jay White at 7:31 PM