Taking full advantage of my companies holiday shutdown I was able to get another game of Muskets and Tomahawks in this evening with my good friend Roy Scaife.  I continue to love this rule set and find it hard to want to play anything else at the moment.

Objective: Engagement - must kill 2/3rds of the enemy force (based on model count).
Side Plot: Protector of his homeland: Choose a building on the table more than 12" away from any table edge.  If your officer ends the game within that building without any enemy model also occupying this building, you have fulfilled the conditions of your side plot. (achieved)

Objective: Scouting Mission - must scout each quarter of the table (4x4' table, 4 quadrants).
Side Plot: Capture: The mission of your officer is to bring back a prisoner.  To do that he must kill an enemy figure in melee.  Once this is done, place a marker near the officer to indicate tha he is carrying a prisoner.  As long as your officer has this marker his movement is reduced by 1".  To fulfil the conditions of this side plot your officer must leave the table by any table edge, still carrying the prisoner. (failed)

The British deployed 8" in from the table edge while the French moved units on as they got activated in the first turn (per the objective rules).

The first turn saw the British gaining their positions along the stone walls.  The French advanced onto the table.  The random event was very interesting --- number 16 which resulted in a heavy rain starting and lasting until the event card was drawn again.  On the British Forward, Boys! card the British Grenadiers volley into a unit of Indians.  With some hot dice rolling they managed to kill three Indians.  The Indians get a rout result on their reaction test. 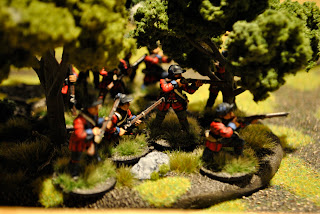 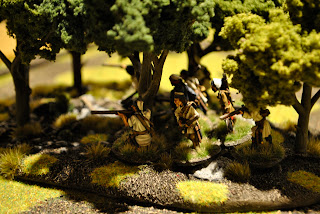 Turn 2 saw the French pushing hard on the British positions but the hard cover offered by the stone walls was hard to break . The British Light Infantry kill five Compagnie Franches de la Marine and they recoil out of the woods.  I have to say the 4+ shooting for the Light Infantry made the real difference here vs. the 5+ shooting for the Compagnies Franches de la Marine.  The British Regulars go over the wall in an attempt to close into short range (12") of the Indians in the pig pen (as the penalty with it raining at long range is -2 to shooting) - but an Indian card comes up and they kill three of the British Regulars forcing them to recoil back over the wall.  Another Indian unit firing from the woods kills two Colonial Militia and they recoil.  Rangers fire on French Regulars killing two but to no effect on the reaction test.  The Light Infantry kill one more Compagnies Franches de la Marine but that also has not effect on the reaction test.

At this point the random event card is drawn and the raid effects end.  The new random event is "A leader is born."  A random unit is selected and one of the models from that unit is promoted to an officer.  One of the French Regular units is selected (randomly determined) and they gain a second regular officer.  This actually ended up hurting that unit in the long run as they got reduced to five models not long after and could have used that additional model to maintain firing line and six or more models for reaction test purposes.

The British Grenadiers retaliate against the Indians (who shot the Colonial Militia), killing one and sending them into flight.  The British Regulars fire on the Indians in the pig pen and now that the rain has stopped they manage to kill three.  The Indian unit in the pig pen routs on their reaction test.  The Rangers continue to fire on the French Regulars killing three and forcing them to recoil. 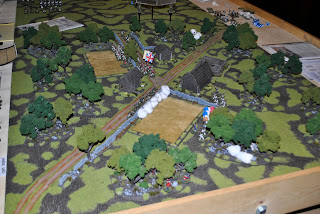 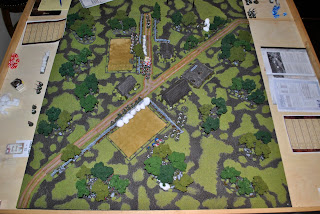 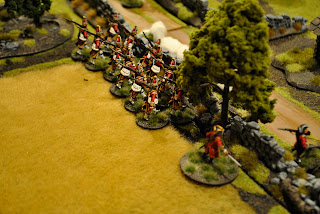 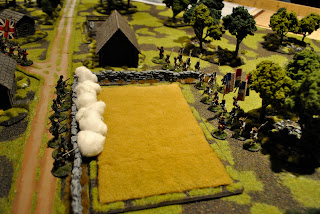 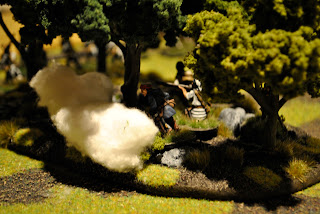 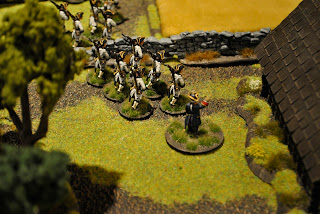 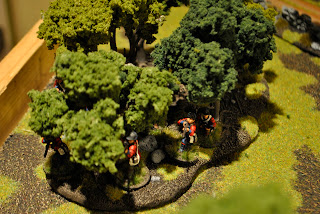 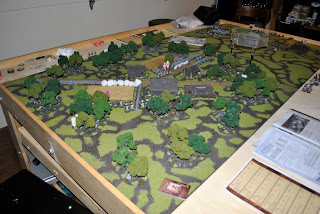 Turn three sees the random event card come up as the first card!  We get "Under pressure." - until the end of the turn, when a new card is played, roll a D6.  On a result of 6, that card is not resolved and the turn ends.  Ouch!  I had been rolling hot all game and got a little nervous on this one!  As it turns out we would not roll a single six through the entire deck ... calling the game at the end of turn three (British attained their objective of killing 2/3rds of the French force and there was little left for the French to do ... with not enough figures to complete their objective successfully).

Much the same firefights against the Indians occurred - reducing them to a single unit in flight by the end of the turn.  What was very fun was the French Regulars charged the Rangers at the wall .. and drove them back.  Roy's dice had been cold all game but they came back for this melee.  The Rangers suffer three killed while the Regulars suffer two casualties.  The Rangers recoil.

The Rangers charged two times after being recoiled to retake the wall.  They where driven back a second time but the third time, after being reduced to just two models (vs. a single French Regular) they finally killing the last remaining French Regular from that unit.

While the Rangers are feeling good about retaking the wall, a French officer decides to go all in and avenge his fallen comrades.  The two remaining Rangers are charged by the newly promoted French Officer (from the earlier random event).  They fight three rounds of melee before the Rangers finally take down the French Officer. 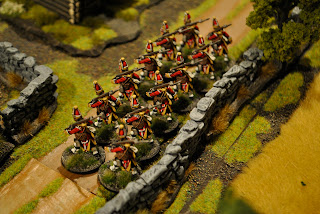 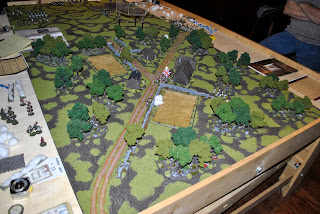 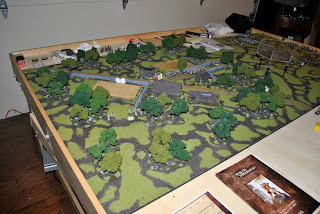 Overall a great game.  The British positions at the stone walls really made all the difference here as well as my hot dice rolling throughout the game.  This was the first game that we used talents in -- just taking the basic talents for Regular Officers - tactician.
I've decided to make measuring sticks for the common movement and shooting ranges.  I'm also going to get some "rubber chopsticks" that can be used to move models in and out of the woods.  I'm also going to create a "morale marker" that holds the army morale card and has dial's for 1/3, 1/2 and 2/3rds army strength as it is important to keep track of this for several objectives, side plots and for the purposes of adding the morale card into the deck (which for the French would have been added in turn four in this game).
Posted by Jay White at 5:25 PM