Got together today with Roy Scaife, Jeff Hummel and Dan Kerrick to play some games of Muskets and Tomahawks.  We both played on 4x4' tables and had a great time.  In our case the French ruled the day winning both games!  Lots of pictures at the end of the report.

Objective:  Scouting Mission
Side Plot:  Let us thwart their plans! - in short I have to prevent my opponent from accomplishing his slide plot.  (Achieved --- killed the French officer).

Objective: Defence
Side Plot: Boldness - The French officer needed to end two (rolled D3+1) movement activations within 12" and LOS of one of my units. (Failed)

The French deployed their units within 4" of the town (two buildings in roughly the center of the table).  The Indian force lay in reserve needing to roll equal to or lower than the current turn number (tested at the start of the turn) to see if they arrive along their table edge.  It was turn 4 and 5 before both Indian units made it onto the table.

Some men have spotted a patch of unstable ground - Dan was nice enough to put a big pile of very difficult terrain right in front of one of my firing lines.

Let's go - both Dan and I put an irregular card back into the deck.  What is funny here is that this was timed with my Rangers advance on some Compagnie Franches de la Marine.  I knew he had exhausted all of his irregular cards -- well, he put one back in -- but I had all four of mine!  Of course, his card comes up first, he shoots the rangers, killing 4!!!  Rout, bye bye Rangers!

Prudence - One of my British firing lines moved towards a nearby woods ... which was good as it was bringing the unit into LOS and range of one of the Indian units that had just arrived.

Casualties amongst officers were high in the 18th century as Daniel Morgan can testify - this was both a tough one and absolutely hilarious!  I lost my officer (it was 50/50 between the Indian Chief and my officer) but he was desperately needed at this point since both of my firing lines needed him for their reaction tests!  He just up and had a heart attack ... right there in the middle of the battle --- that bastard!

Nervous - My unlucky Grenadiers recoiled (they had just done so from enemy fire).

The British regulars advanced up the road and the leading French firing line put a volley into the lead unit giving them 5 casualties to start ... ouch!  They gave just as good back though and eventually all but two of the French Regulars lay dead on the field of battle.  The British Grenadiers took a lot of fire from both French Regulars and the Compagnie Franches de la Marines.  Eventually only a lone British Grenadier remained (hadn't routed either!) and he made his way over with the remaining British Regular firing lines.

Once the French Regulars got cleared out of town the game got locked into a distance firing between newly arrived Indians and what was left of the British Regulars.  The Compagnie Franches de la Maine tipped the scales at this point against the British.

Three key turning points in the game.  The first was that the Indians (French allied) didn't get onto the table until late in the game - turn 4 for the Chief and one unit of 6 and turn 5 for the other.

The second was the British Rangers advancing to melee the Compagnies Franches de la Marine.  The British has 4 irregular cards in the deck and the French just a single one (added by a recent random event).  The French card came up first and the Compagnie Franches de la Marine shot the Rangers and did 4 casualties ... with the reaction test being rolled low and resulting in a route (poof!).

The third was when the British officer died from a random event (heart attack we speculate ...) - this occurred right when he was most needed and essentially sealed the fate of the British forces.

A win to the French.

Objective:  Engagement
Side Plot:  Oath - A chosen unit must survive the game with less than 50% casualties. (Achieved)

Objective: Engagement
Side Plot: Boldness - The French officer needed to end two (rolled D3+1) movement activations within 12" and LOS of one of my units. (Achieved)

Moment of doubt - no effect.

Desertion - unit of Indians tested but passed their reaction test.

Both armies came on the table with the British getting the initial round of cards and movement.  Both armies exchanged fire at long range with light casualties.  French Grenadiers formed into firing line and broke the stalemate by delivering massive casualties upon a British Regular unit (7 casualties, dropping them below 6 models and taking the firing line away).  That British Regular unit went to flight and was destroyed later by additional fire.

Both the French and British achieved their sub plots.  Win to the French.

Several clumsy events occurred (outside of the game) ... the best was Roy attempting to roll a bunch of dice into the most excellent dice shield and completely missed it while hitting it and sending it flying across the table ... we all had a good laugh at that! 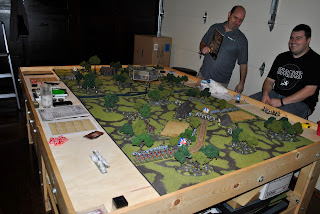 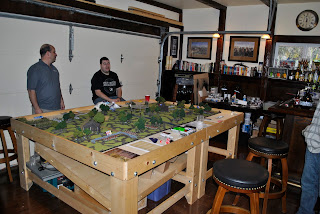 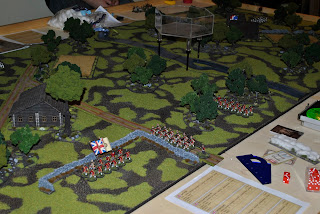 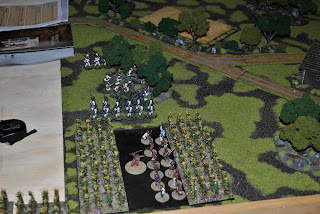 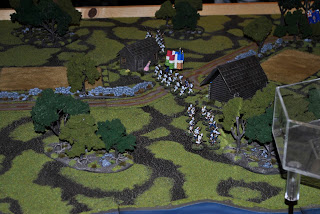 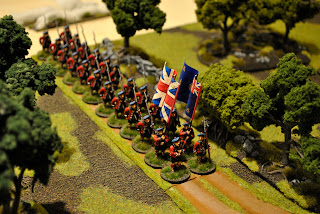 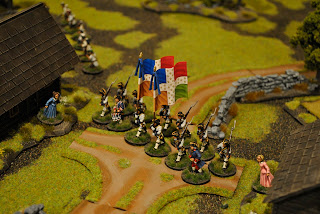 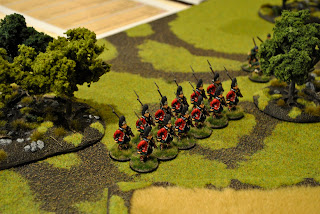 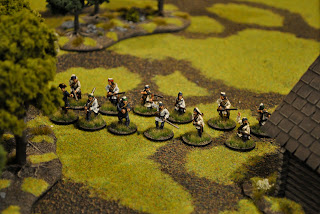 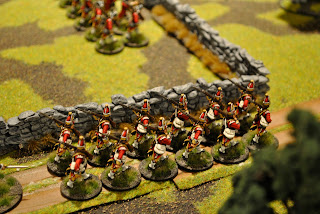 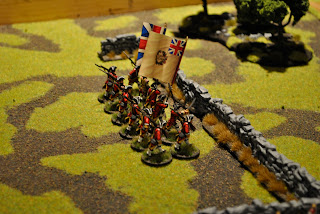 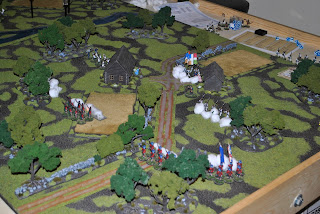 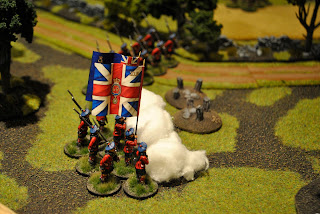 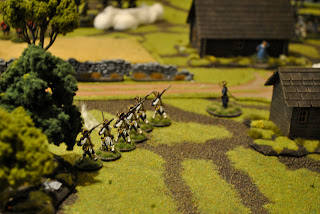 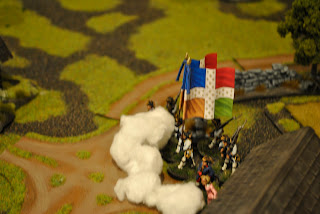 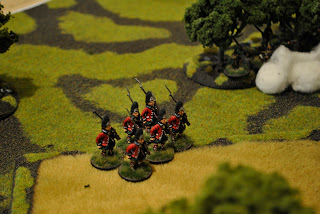 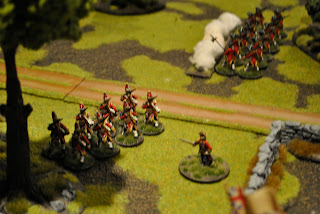 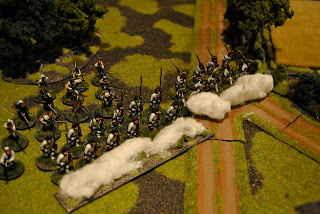 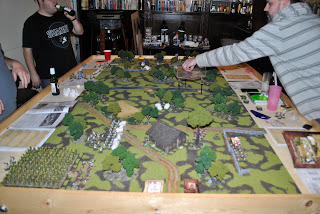 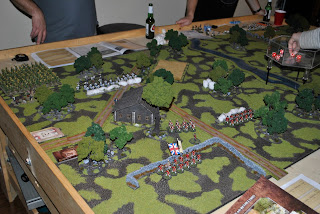 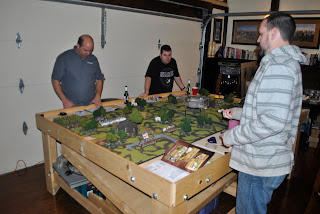 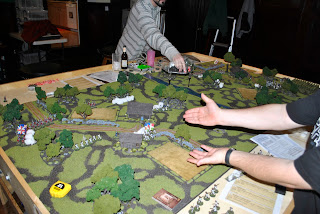 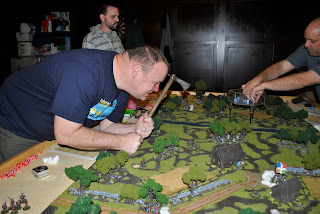 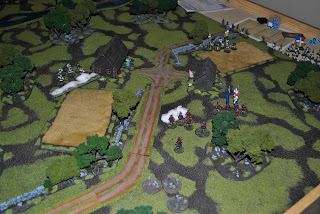 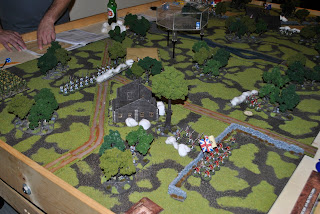 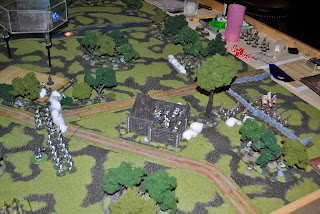 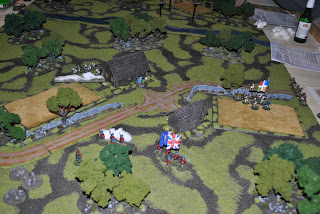 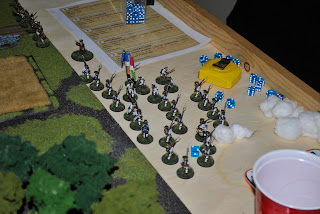 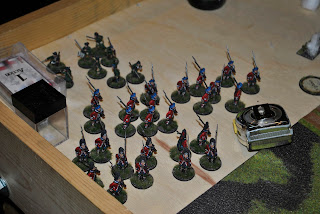 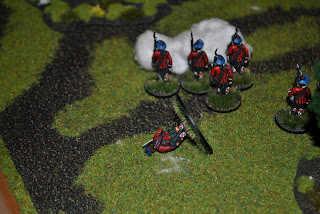 It was a fun day of Muskets and Tomahawks.  I really just can't get enough of this game ... it is just so fun and every game is very different from the next with little plots, twists and turns build into the foundation of the game play!
Posted by Jay White at 3:01 PM